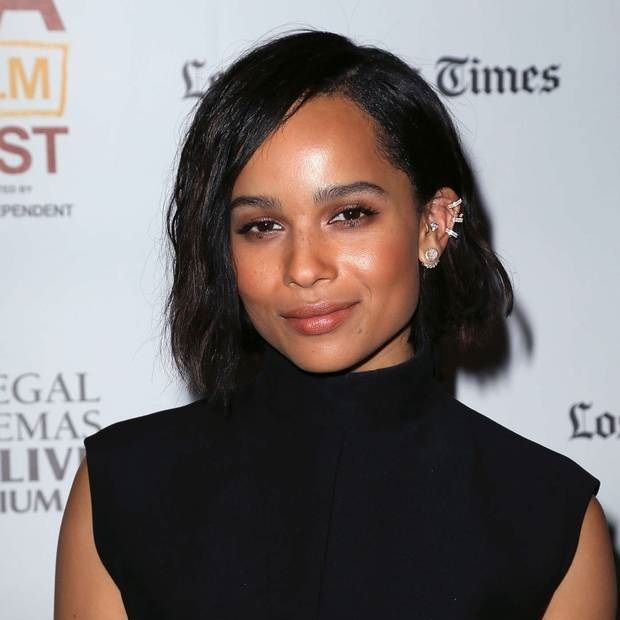 Zoë Kravitz is an American Actress, Singer, and Model who became famous after her film No Reservations. Zoë Kravitz is the daughter of the famous singer Lenny Kravitz. Some of her famous films include X-Men: First class, Harry Potter, After earth, etc.

Zoë Kravitz is an American Actress, Singer, and Model (34 years) who was born on December 1, 1988,in Los Angeles, CA, United States. She is also known by name is Zoe Isabella Kravitz. The name of her father is Lenny Kravitz, Her mother’s name is Lisa Bonet. However, she has a step-father Jason Momoa.

She has a half younger brother named Nakoa-Wolf Manakauapo Namakaeha Momoa, and half-sister, Lola Iolani Momoa. She is a granddaughter of Sy Kravitz and Roxie Rocker. Kravitz belongs to a Mixed (African-American) ethnicity and identifies as Ashkenazi Jewish. Her birth sign is Sagittarius.

She studied at the Miami Country Day School and Rudolf Steiner School. Later, she joined the State University of New York at Purchase.

Zoe is a multi-talented star with acting and singing skills. She has numerous amount of movies played in her career. Here are some of the highlights of her career. In an industry that rarely shows black women as anything but, in Zoe’s words, “best friend of the white girl”, Kravitz works hard to give weight to her flimsy blockbuster roles. She says in an interview with The Guardian:

“I ask writers and producers: ‘Why don’t you have any black people in your film?’, ‘Why do stories happen to white people and everyone else is a punchline?’ What I’m finding is that a lot of people don’t see it’s an issue because it’s not their story, unless they’re black or a minority.”

Zoe is also very vocal about racial discrimination that she faces in the industry. Regarding this issue, she says:

“There are certain roles where I know what they are asking for. They want me to talk like I’m not an educated person. But if my character’s not educated, you have to tell me why. It can’t just be because I’m black.”

She also talks about what a good piece of art looks like. “Art should be offensive to an extent. That’s what gets a reaction out of people; someone’s opinion that’s different from yours. It’s amazing to me that no one takes the time to try and see what someone’s trying to say because they’d rather just post an inane comment. They’re missing out on good art.” She goes on:

I think a lot of films now are really, really boring because no one’s willing to offend anyone. Everything’s become so PC. If you watch any movie that was made before the mid-90s, there are things that are being said and done that no one would dare do now, because they’d get criticised on a blog.

Another one is Dope, a 2015 comedy-crime movie. The film wowed critics at the Sundance film festival by riffing on the stereotypes that Zoe has fallen victim to. It was written and directed by Rick Famuyiwa and stars newcomer, Shameik Moore as Malcolm, a geeky black teenager trying to navigate the rougher areas of the Californian city of Inglewood without gang members stealing his vintage Nike Airs or touching his hi-top haircut.

Zoe Kravitz’s character in this film is Nakia. She is the symbol of the film’s issues. She’s a checklist hottie, bounced between her gangland beau, which is played by rapper A$AP Rocky, and bumbling, nebbish Malcolm. Nakia has smarts, but no wit; looks, but no sex appeal. She’s a sexy-savior stereotype in a film that makes a big deal of being seen to subvert them. Her post-production film Viena and the Fantomes as a Brand Manager will be released in 2020, and The Batman as Selina Kyle / Catwoman in 2021.

As of her music career, she started her music career at the age of 16. Where she was a lead singer of band “Elevator” and “Lolawolf”. They release their debut studio album Calm Down album in 2014 with Innit Recording label. However, her debut EP released the same year name Lolawolf EP and Everyfuckinday EP in 2015.  Her singles include Teardrop in 2016 and Baby I’m Dyin in 2017.

In addition to acting, she works as a fashion model and musician. She is the face of YSL Beauté and Tiffany & Co., as of 2017 and has modeled for Balenciaga, Alexander Wang, Coach New York, Vera Wang,  Tumi, and Calvin Klein. She overlooks the band Lolawolf and released the album Calm Down in 2014. The band has even opened for Lily Allen and Miley Cyrus and performed at several music festivals. She has additionally collaborated with various artists, such as Drake and Janelle Monáe.

She was even ranked one of the best dressed women in 2018 by the fashion website Net-a-Porter.[60]

The multi-talented actress, the singer nominated for awards as Black Reel Awards for Best Breakthrough Performance for movies It’s Kind of a Funny Story, Scream Awards for Breakout Performance female and Teen Choice Awards for Choice Movie Chemistry and Choice Movie Breakout: Female for X-Men: First Class. However, she is also nominated Grammy Awards for Album of the year for Dirty Computer for feature artists of Janelle Monae. She hasn’t won any of the awards yet but could win awards in the near future.

The multi-talented star has an estimated net worth of around $8 million. She earns a lot of money from movies, Tv Shows and other entertainment industries.

Kravitz lives in Williamsburg, Brooklyn and her father wrote the song “Flowers for Zoë”, from his second album Mama Said,as a tribute to then-two-year-old Zoë. Talking about her dating history, Zoe briefly dated Ezra Miller while they were filming Beware the Gonzo in 2010. She also dated Michael Fassbender from 2010 to 2011. Then from 2011 to 2013, she was in a relationship with actor Penn Badgley.

At present, Zoë is a married star and her husband is the famous actor Karl Glusman. They tied the knot on June 29, 2019. Moreover, the lovers were involved in a relationship since 2016. They then engaged in February 2018, as per Kravitz’s interview published in October 2018.

On her first day shooting her first feature, they didn’t allow Zoë Kravitz wasn’t to work. She was cast as a goth babysitter in the Catherine Zeta-Jones rom-com No Reservations. As the then-teenager, she couldn’t go on set until her designated guardian had signed in.

But Lenny Kravitz came late, and when he arrived, the rockstar caused such a stir that the delays simmered on. The film’s director, Scott Hicks, was not aware when he cast her that Zoë was Lenny’s daughter. Scott wasn’t expecting the fuss. So Zoë took control. “She told her dad off,” says Hicks. “He wasn’t late again.”

Zoe involved in controversy after Lily Allen wrote that both kissed in her autobiography. When asked about it she replied who is Lily. Other than that it was rumored that she dated the actor Ezra Miller, Penn Badgley, and Pop Singer Twin Shadow.