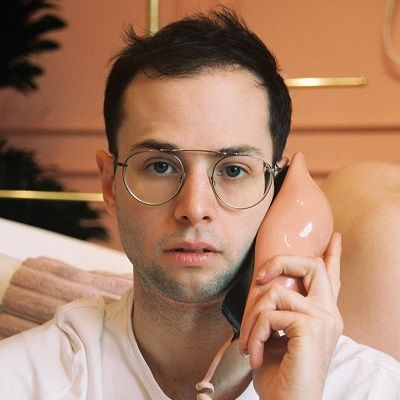 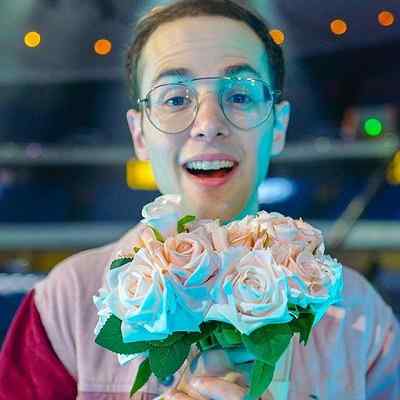 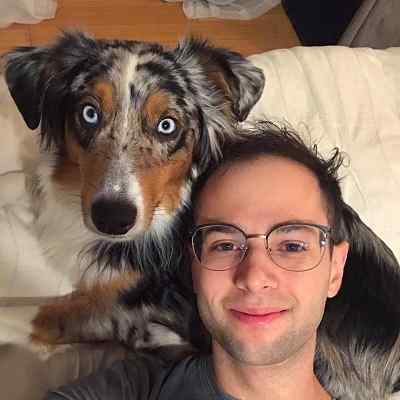 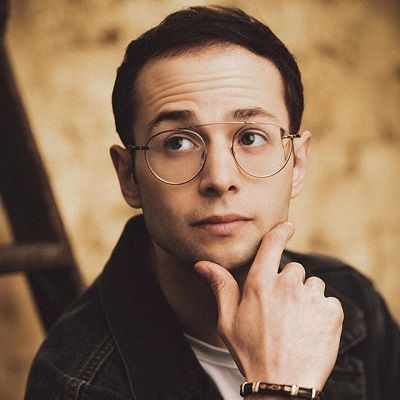 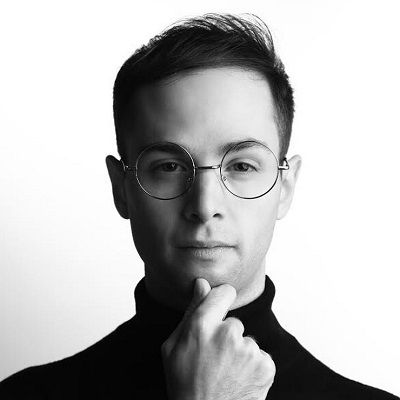 Zach Kornfeld is an American social media personality. Zach Kornfeld is a Youtube star, a businessman, a video creator, Screenwriter, a video producer, and an actor. He is popular for “The Try Guys” Youtube channel along with his pals Keith Habersberger, Ned Fulmer, and Eugene Lee Yang.

Zach Kornfeld was born on 26 July 1990 and he is currently 32 years old. He hails from Scarsdale, New York, and his family is Jewish. Talking about her family, his parents are Adam and Margo Kornfeld. He also has a sister named Stephi Likewise, his full name is Zachary Andrew “Zach” Kornfeld.

He is Jewish but does not keep kosher and did not have a bar mitzvah. However, he did choose the Hebrew name Rakdan (Hebrew: רַקְדָן), which means “dancer”. Regarding his educational journey, he graduated from Emerson College with a Bachelor of Fine Arts.

Moreover, he also has a tattoo of a smiley face on his buttock and he was diagnosed with ankylosing spondylitis in his late 20s. Then in the year 2019, he underwent hair restoration to combat male pattern alopecia. It was a combination of surgery and microblading. Although he is an avid cat lover, he owns a pet dog named Bowie. 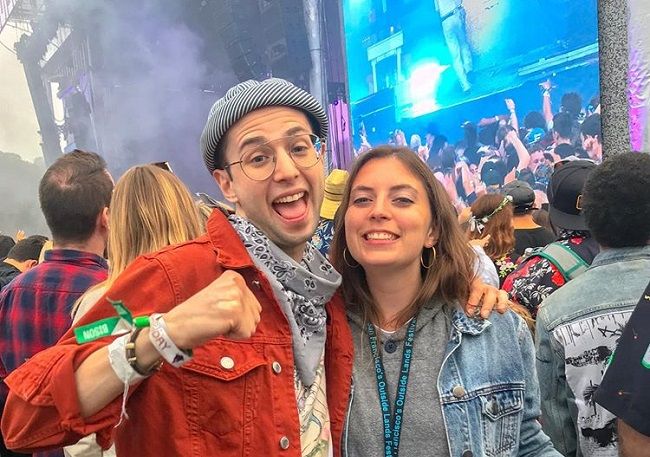 Caption: Zach Kornfeld posing for a photo with his sister during a concert. Source: Instagram

Professionally, Zach Kornfeld is a social media personality based in Los Angeles. He is a video producer and actor for BuzzFeed and is part of the BuzzFeed video comedy group “The Try Guys”. He specializes in comedy and short-form viral videos.

Moreover, “The Try Guys” is one of Buzzfeed Motion Pictures’ most popular series. This series specializes in fun and short-form viral videos and has garnered over 3.2 million subscribers and over 77 million views on YouTube. He joined Buzzfeed in 2014 and has been involved in the development of videos since then.

Likewise, he started making short movies and editing videos at the age of 10 years by using legos and stuffed animals. It all began after receiving the LEGO Movie Maker as a child. Moreover, he also appeared on Saturday Night Live in an episode hosted by Elijah Wood. It was the episode that aired on December 13, 2003.

Moreover, he worked as an intern at The Weinstein Company and was a production assistant on the dance film Step Up 3D. Both he and Andrew Ilnyckyj became video producers for BuzzFeed. 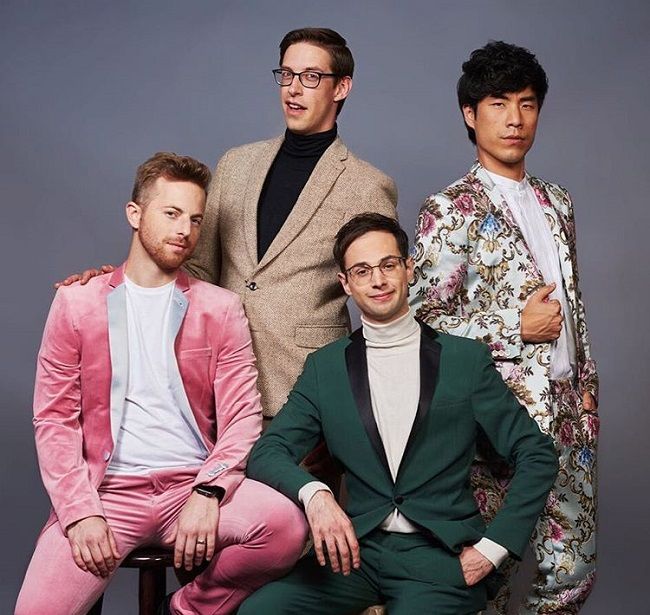 Caption: Zach Kornfeld posing for a photo with the members of “The Try Guys”. Source: Instagram

As a part of the Try Guy series, he has experienced swimming with sharks in virtual reality, simulated the pains of childbirth, and has been part of other quirky experiments.

On May 13, 2020, he announced his intention to start his own tea business for less than $500. This process is being documented in a six-part series on the Try Guys YouTube Channel. The other members of Try Guys are Keith Habersberger, Ned Fulmer, and Eugene Lee Yang.

The first video on this channel was Guys Try Ladies’ Underwear for the First Time. This video went viral and earned millions of views in a couple of months. Although it was a little weird for the squad to create this video, they received extremely positive feedback. Hence, this urged them to create more such videos. Thus, the group came up with more funny and weird content. Most of the videos they created became huge hits and motivated them further.

Some of their most popular videos are The Try Guys Try Labor Pain Simulation, The Try Guys Try Wedding Dresses, and The Try Guys Wear Boob Weights For A Day. He and his team continued the journey of creating and publishing videos and they garnered international attention in no time.

Moreover, he is the youngest of all of the Try Guys. He also has a book that the group released on 2 April 2019 called The Try Guide: The Hidden Power of F***ing Up. 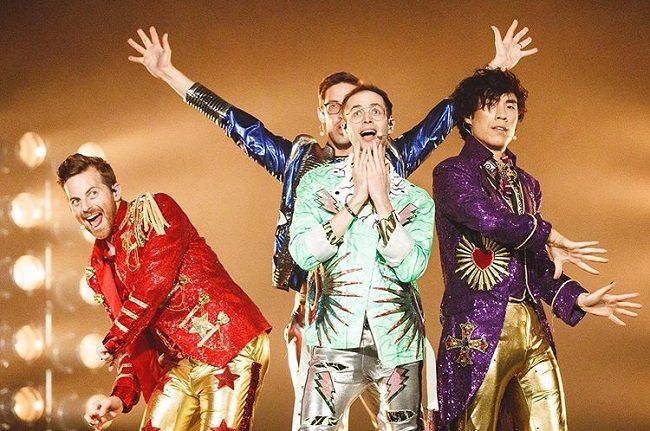 In 2017, their show titled Squad Wars premiered on YouTube Red. All the members of The Try Guys left Buzzfeed on June 16, 2018. and started their own independent production company called 2nd Try LLC and gained all the rights to The Try Guys brand.

However, he and his team still maintain some connections to Buzzfeed. With their new company, the guys promise their audience “a brand-splankin’ new array of digital shows, feature films, live tours, and much more”.

He and his team have been the subject of substantial publicity with appearances in numerous magazines like Today. Their most popular video The Try Guys Try 14 Hours Of Labor Pain Simulation, which has over 13 million views has raised their stardom to another level. Today, their channel has successfully earned more than 7.3 million subscribers and the number is increasing day by day. The Try Guys upload new episodes every Wednesday and Saturday.

Moving on, he has a net worth estimation of approximately $2 million. He mostly earns through his Youtube videos with the other Try Guys. Besides this, he also earns through his personal/independent projects including the Tea shop.

Maggie Bustamante is a health and wellness advocate who goes by the username @magsbustamante on Instagram. he lovers frequently feature each other on their respective social media accounts. Moreover, he has maintained a clean public profile that is away from rumors, scandals, and controversies, which might hamper his professional career and personal life. 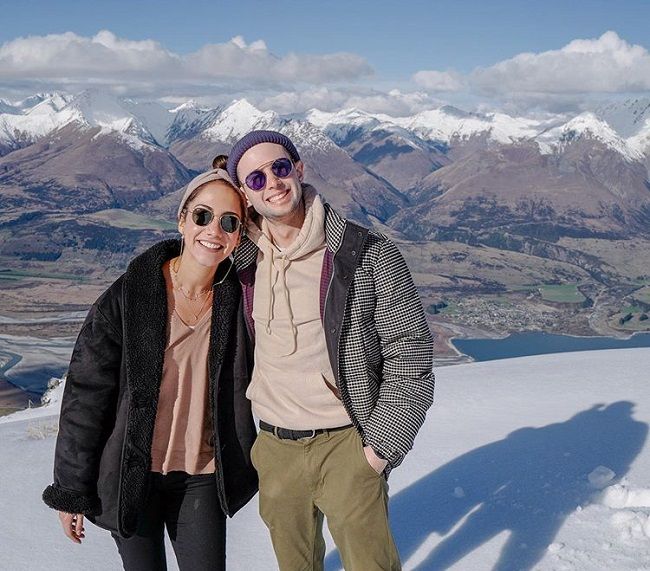 Caption: Zach Kornfeld posing for a photo with his lover during a trip to the mountains. Source: Instagram

Zach Kornfeld stands tall at a height of 5 feet 7 inches or 1.75 cm and his weight is approximately ‎130 lbs or 59 kgs. Other than this, there is no information about his chest-waist-hip measures, biceps, dress size, shoe size, etc. Moreover, he has blue eyes and brown hair color.

Talking about his social media presence, Zach Kornfeld joined Twitter in March 2009 and so far has 447.5K followers on his @korndiddy account. Likewise, he goes by @korndiddy on Instagram. This account boasts 1,375 post shares and 1.4 million followers at the time of writing this biography.

He also has his own Youtube channel called “korndiddy”. He created it on September 26, 2006, and has 125k subscribers at the time of writing this biography. However, he is more active on “The Try Guys” Youtube channel than on his channel. He and the other Try Guys created their group’s Youtube channel on May 23, 2018. So far, this channel has over 1.3 billion views and 7.3 million subscribers.

He is also available on Tiktok under the username @korndiddy. He is also a crown verified Tiktok content creator who has earned 688.5K followers and 5.9 million likes. We can also contact him at [email protected] for more inquiries.