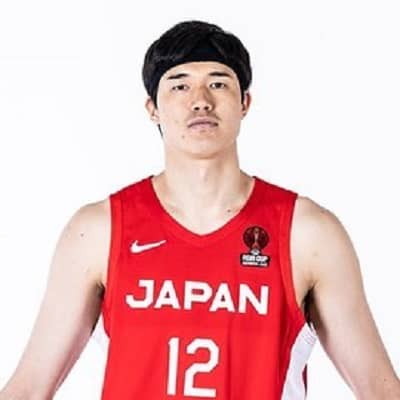 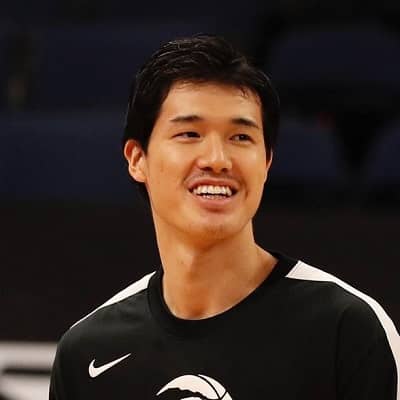 Yuta Watanabe is a professional basketball player from Japan. Moreover, he plays a small forward position for the Brooklyn Nets of the NBA.

Yuta Watanabe was born on the 13th of October, 1994, in Yokohama, Japan. According to his birth date, this basketball player is 28 years old and holds Japanese nationality. Moreover, he belongs to the Asian ethnicity, and his birth sign of Libra.

He is the son of Hideyuki Watanabe (father) and Kumi Kubota (mother). Likewise, he grew up with his sister, Yuki Watanabe. He grew up in Miki, Kagawa. In terms of his family, Watanabe comes from a long line of basketball players.

Talking about his academic career, he enrolled at Kagawa’s Jinsei Gakuen High School. Moreover, he led the basketball team to second place in the All-Japan High School Basketball Tournament.

He attended St. Thomas More Preparatory High School in Oakdale, Connecticut, in 2013. In high school, he averaged 13 points and six rebounds outside of Japan. He led the team to achieve a 26-8 overall record and get to the National Prep Championship game.

Likewise, he scored 12 points against Suffield Academy in his first appearance in the annual National Prep School Invitational in January 2014. He also had 20 points and six rebounds in a 70-61 victory over Canarias Basketball Academy from Spain.

Following his admission to George Washington, his featured profiles were published in prestigious media such as The New York Times and The Washington Post. Watanabe made his George Washington debut in November 2014, averaging eight points, seven rebounds, and a block in 20 minutes of action against Grambling State.

Similarly, on March 7, he set a career-high with 21 points and seven 3-pointers against Massachusetts. At the same time, Watanabe was named Atlantic 10 Rookie of the Week for the second time.  As a result, he became the first player since Lasan Kromah in 2009-10 to win successive Rookie of the Week awards in the same season.

He recorded his first double-double in a 77-75 victory against Siena in November 2016. In addition, he became George Washington’s second-leading scorer, scoring 12.2 points per game. As a result, he was chosen to the Atlantic 10 All-Defensive Team.

Watanabe went undrafted in the 2018 NBA Draft and subsequently played in the NBA Summer League for the Brooklyn Nets. He later signed a two-way contract with the Memphis Grizzlies and the NBA G League’s Memphis Hustle.

This player made his debut against the Phoenix Suns in October 2018, averaging 2 points and 2 rebounds off the bench. As a result, he became the NBA’s second Japanese player after Yuta Tabuse.

Furthermore, Watanabe spent most of his season with the Memphis Hustles in the G League. He averaged 14.2 points, 7.2 rebounds, 2.6 assists, and 1.1 assists in 32 of 33 games in the NBA G League.

In the Memphis Hustle’s 130-126 victory over the Iowa Wolves in January 2020, Watanabe scored a team-high 28 points on 12 of 19 field goal shooting and 2-of-4 from three, while also contributing 7 rebounds, 4 blocks, 2 assists, and 2 steals. As a result, he was chosen Western Conference Midseason All-NBA G League.

On December 19, 2020, Watanabe signed a deal with the Raptors to recruit their preseason roster. On December 31, he made his Toronto Raptors debut, earning four rebounds, an assist, a block, and a steal in nine minutes of action against the New York Knicks.

Then, against the Sacramento Kings in January 2021, he scored a career-high 12 points on 80.0 percent shooting from the field and added 6 rebounds, 2 assists, and 2 steals. During a workout on February 9, Watanabe injured his left ankle.

As a result, this player returned on February 18 against the Milwaukee Bucks, averaging 2 rebounds and a block. In a 113-102 victory over the Orlando Magic in April 2021, Watanabe set a career-best with 21 points on 7-of-11 shooting from the field and 2 of 4 from three, as well as 6 rebounds, 2 assists, and 1 block.

As a result, Watanabe missed around 18 games this season due to a left leg strain. As a result, in 14 minutes of action against the Memphis Grizzlies, he averaged three points and two blocks. Later, against the Cleveland Cavaliers in December 2021, he had a double-double with 26 points and 13 rebounds. 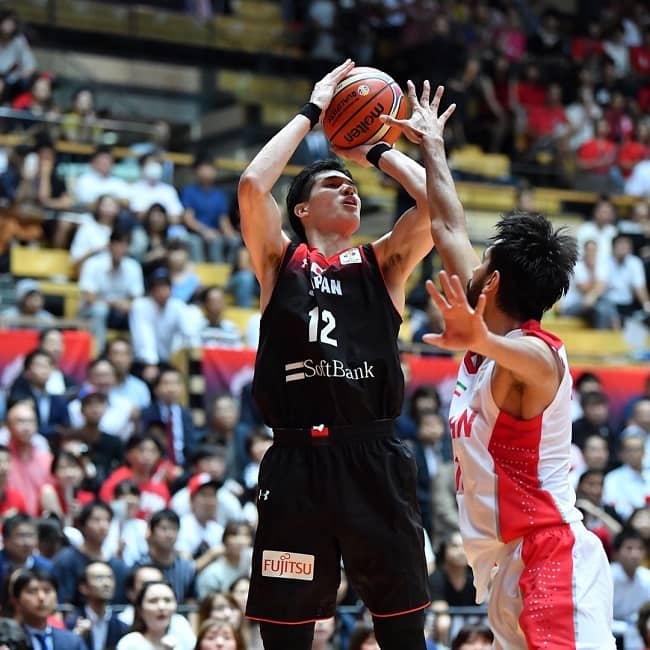 He made his senior debut for Japan at the 2013 East Asia Basketball Championship, helping the team to a bronze medal finish. During that time, he recorded 22 points and 14 rebounds in a 101-53 victory over Macau.

Similarly, at the 2013 FIBA Asia Championship, he finished ninth with 5.2 points, 1.2 rebounds, and 0.5 assists in four games. Watanabe was therefore named to the 12-man team for the 2016 FIBA Olympic Qualifying Tournament, where he finished with 7.0 points, 4.0 rebounds, and 1.0 assists.

As a basketball player, he has earned several awards and recognition. He was named the Atlantic 10 Defensive Player of the Year and Third-Team All-Atlantic 10 in 2018. 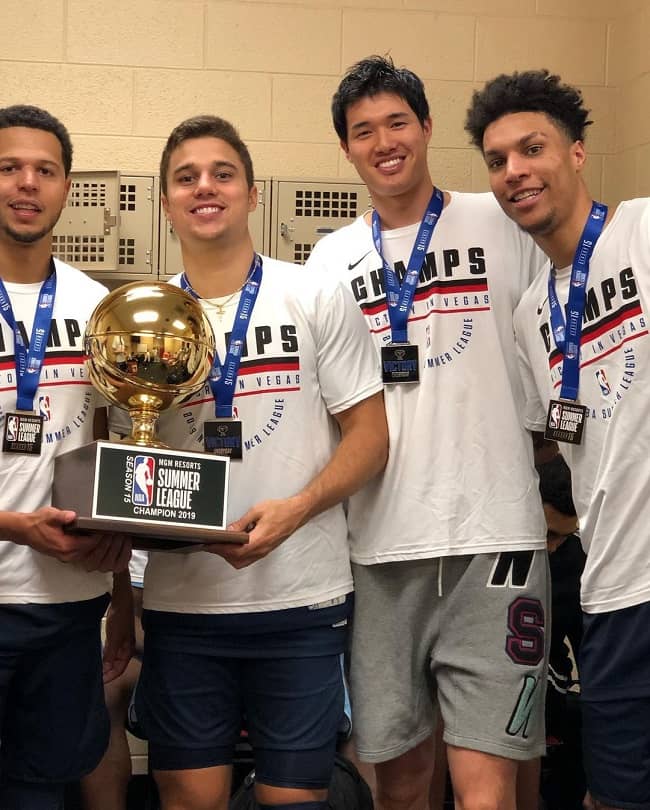 Recently, on May 26th, 2022, Watanabe and television announcer Akiko Kuji announced their engagement. However, there is not much information regarding their first meeting, and when they started dating each other. Moreover, the couple is currently living happily

This basketball player stands 6 feet 9 inches and weighs around 98 kg. Moreover, he has brown eyes with black hair color and there is no other information regarding his other body stats. 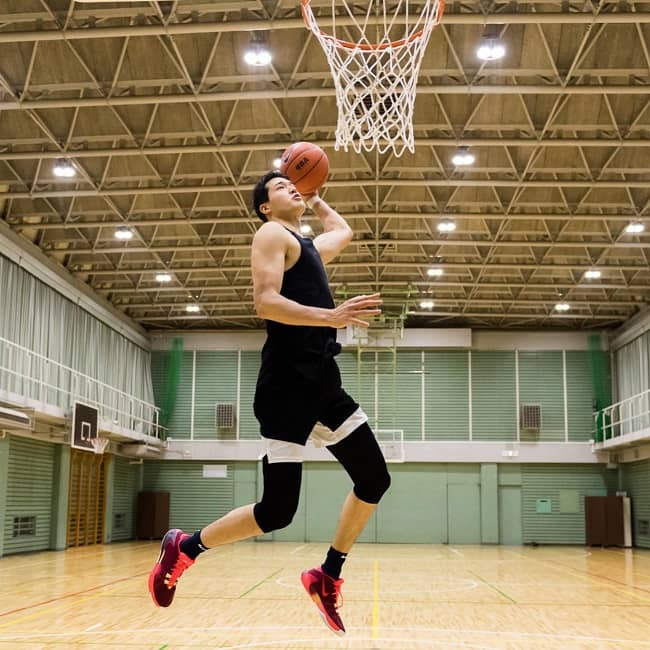