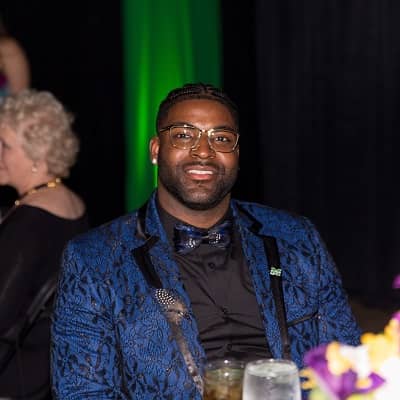 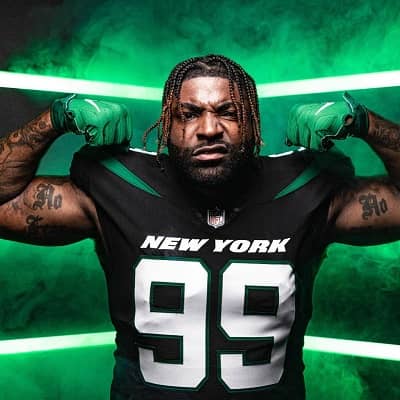 Vinny Curry is an American football player who plays from the defensive end position for the New York Jets of the NFL. Moreover, Vinny Curry was drafted by the Philadelphia Eagles in the second round of the 2012 NFL Draft, with whom he won Super Bowl LII.

Vinny Curry best known as Vinny Curry was born on the 30th June of 1988, in the United States of America in Neptune, New Jersey. According to his birth date, this NFL player is 34 years old and holds an American nationality. He has a birth sign of Cancer and believes in Christianity by religion.

In addition, he is the son of Vincent Curry (father) and Linda Jackson (mother). He has five siblings named; Thomas Jackson, Renea Unverzaght, Jillisa Curry, Shawnda Johnson, and Amanda Johnson.

Regarding his academic career, he completed his graduation from Neptune(NJ) high school. Later, he enrolled at Marshall College, where he played football. During his college years, his breakthrough season came in 2010, his junior year, when he recorded a career-high 12 sacks.

Moreover, he recorded 74 tackles, 11 sacks, and 6 forced fumbles in 2011 as a senior.  The 6 forced fumbles were second-most in the country, and the 11 sacks were sixth-most overall. Later, he became the first Marshall player since Albert McClellan in 2006 to be named C-USA Defensive Player of the Year.

The Philadelphia Eagles selected Vinny Curry in the second round (59th overall) of the 2012 NFL Draft. Since Darius Watts in 2004, he was the Marshall player who received the highest selection. On May 9, 2012, Vinny agreed to a four-year deal with the club.

His first season was uneventful; he played in 6 games but did not make a single start. He finished with 9 total tackles. In his second season, he was given a bigger role and finished with 17 tackles, 5 assists, 4 sacks, and 2 pass deflections.

In 2014, when he appeared in all 16 games, he had a breakthrough season.  Even though he did not make a single start and only made 17 tackles and two assists, he led the team with four forced fumbles and was second on the team with 9 sacks, only behind Connor Barwin.

He was moved to outside linebacker for the 2015 season, but struggled to settle in, recording just 12 tackles and 3.5 sacks in 16 games (with no starts).

His return to Philadelphia was completed by the appointment of new defensive coordinator Jim Schwartz and the team’s move back to a 4-3 defense, despite rumors that he may leave the Eagles in free agency. He and the Eagles agreed to a five-year, $47.5 million contract deal on February 2, 2016, with $23 million guaranteed. Super Bowl LII saw the Eagles defeat the New England Patriots 41–33.

He contributed to the victory with four tackles. He was released by the Eagles on March 16, 2018, after two years of his five-year contract, after he refused to accept a pay cut. Moreover, he agreed to a three-year, $23 million contract with the Tampa Bay Buccaneers on March 19, 2018. He was released by the Buccaneers on February 12, 2019, after playing for them for one season.

Later, on October 7, he was given the go-ahead to leave the injured reserve, and he immediately started working out with the team once more. On October 17, he was assigned to duty. The team placed him on the reserve/COVID-19 list on November 19, 2020, and he was activated on November 27.

On March 24, 2021, he signed a contract with the New York Jets. He said on August 25, 2021, that he had been given the go-ahead to have his spleen dismissed due to a diagnosis of a rare blood disease.

Moreover, he still hoped to come back, but once blood clots formed, he had to start taking blood thinners. He was consequently suspended for the entire 2021 NFL season. His release took place on January 7, 2022. Later, he agreed to re-sign with the Jets on April 20, 2022.

As a football player, he won the Super Bowl champion (LII) C-USA Defensive Player of the Year (2011). Looking at his success, he might earn more awards and honors in the following years. 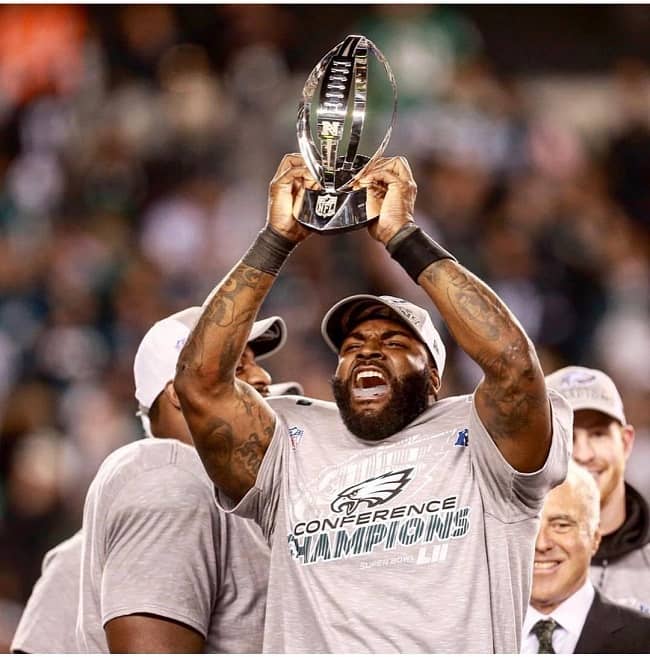 He has earned a huge sum of money as an American football player. As of 2022, his net worth estimates at around $11 million and he has not disclosed his salary and income.

Vinny Curry married Daphne Vanderhorst in the winter of 2021. The pair have been in a relationship since the year 2014. With the relationship, the couple has two kids whose names are Noah Curry and Chole Curry. Moreover, his football player is not a part of controversy or rumors and focuses on his career and personal life. 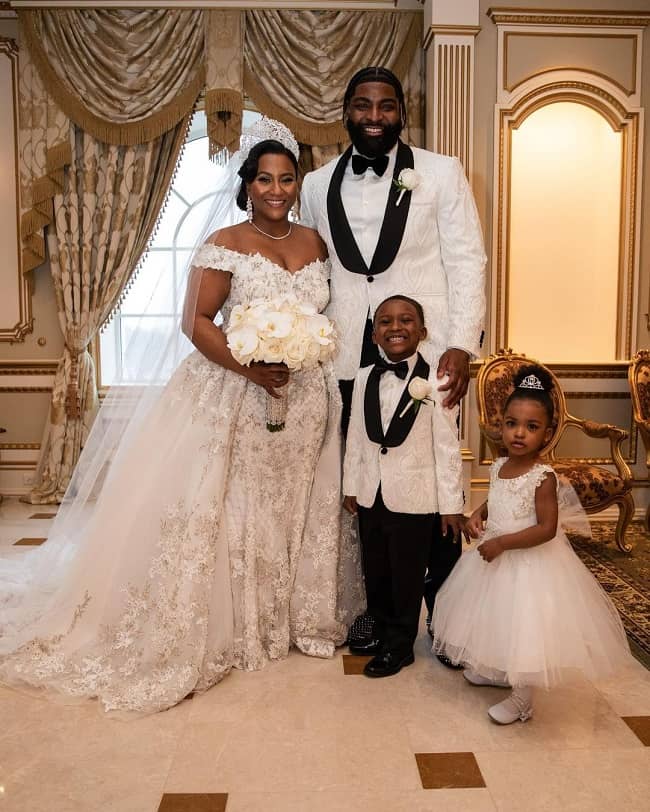 Caption: Vinny Curry with his wife and kids (Source: Instagram)

This American football player stands 6 feet 3 inches and weighs around 127 kg. Moreover, he has short black hair and black eyes color and there is no other information regarding his other body measurement. 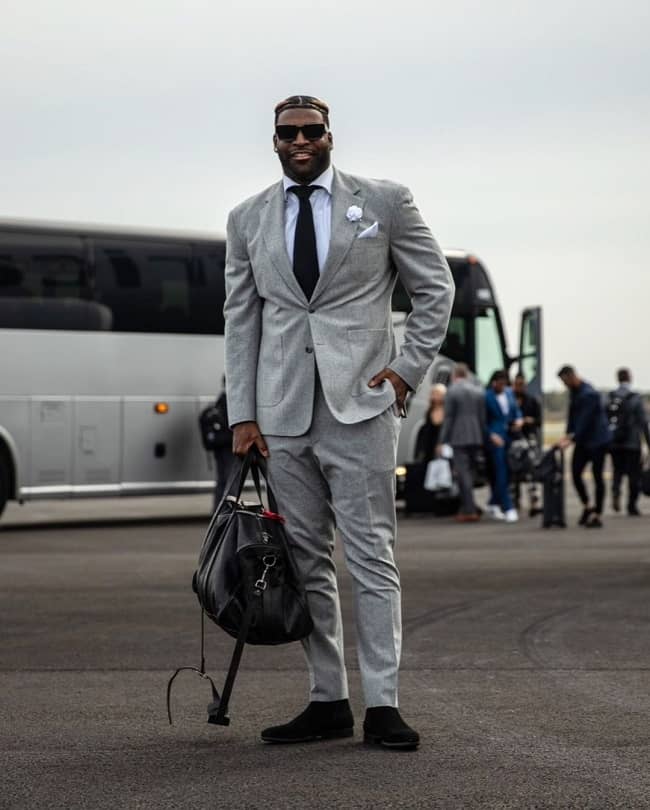