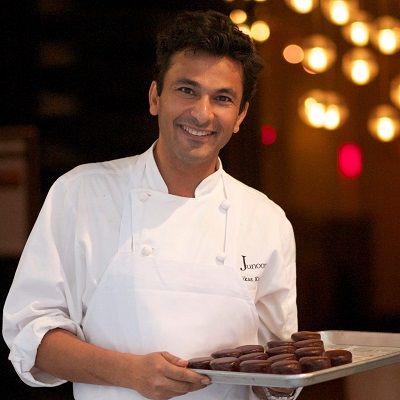 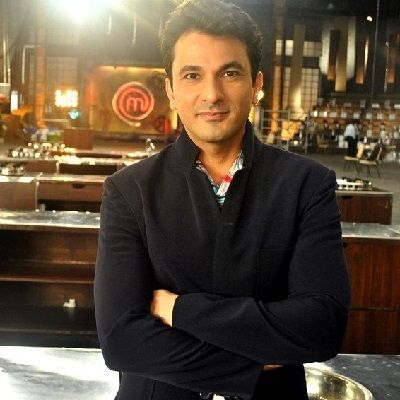 Vikas Khanna is an Indian Michelin star Chef and restaurateur based in New York City. Vikas Khanna is also a cookbook writer who has written several books and also appeared on TV shows like MasterChef India and Australia, Twist of Taste, and  Kitchen Nightmares among others. 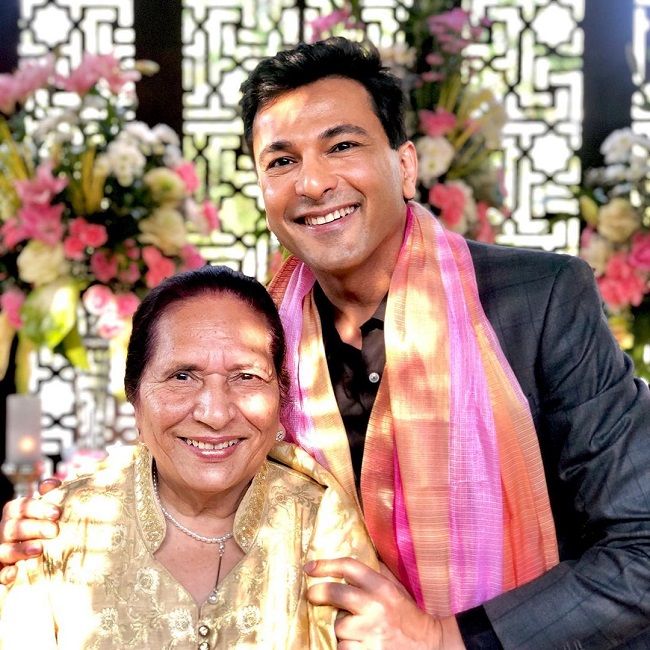 Vikas Khanna was born on 14 November 1971 and his current age is 48 years. He is originally from Amritsar, Punjab, India but is based in New York, the USA. His parents are Davinder and Bindu Khanna. Further, Vikas Khanna was born with misaligned feet and wasn’t able to run until he was 13. His inspiration came from his mentor Sagar Rajani who loved to cook. Sagar’s kitchen became a part of his foundational training.

Moreover, Vikas Khanna began developing recipes at a very young age and opened Lawrence Gardens Banquets to host weddings and family functions when he was only 17 years old. Also, he has two siblings namely Radhika Khanna and Nishant Khanna.

Talking about his educational journey, Vikas graduated from the Manipal Academy of Higher Education in the year 1991. Similarly, he has also attended Cornell University, Culinary Institute of America, and New York University. Furthermore, Vikas Khanna is also a graduate of the Welcomgroup Graduate School of Hotel Administration, Manipal, India, and Le Cordon Bleu in Paris.

Later, Vikas also received an honorary doctorate at GD Goenka University as a recognition for his outstanding work in culinary art philanthropy, altruism, and humanitarianism. It was also for his global reach as a chef. 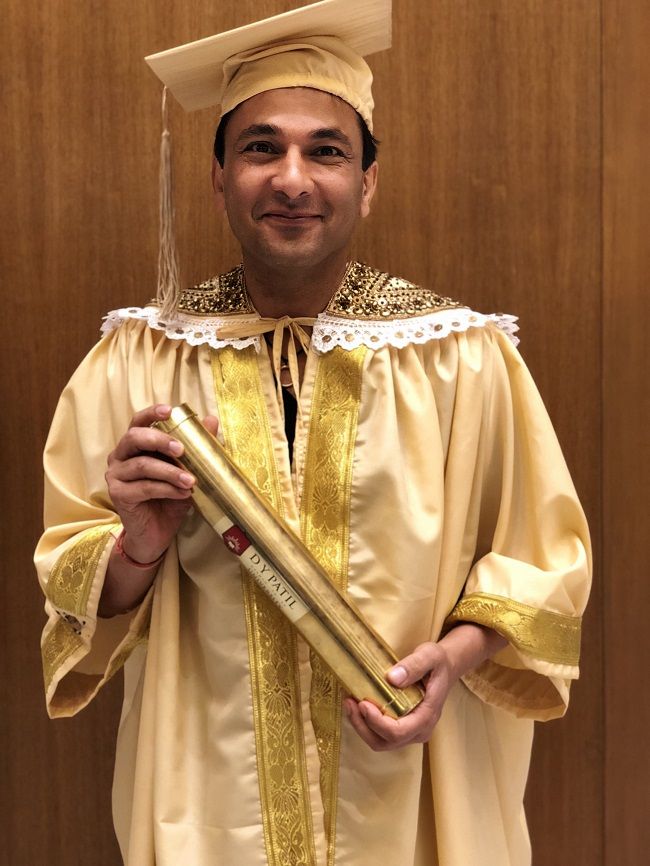 Vikas Khanna is a Michelin star Chef, restaurateur, and cookbook writer. He is also a filmmaker and humanitarian. Additionally, Vikas is one of the judges of the Star Plus series MasterChef India who is based in New York City. While in India, he worked for the Taj Hotels, Oberoi group, Welcome group, and Leela Group of Hotels. Later he also worked at Salaam Bombay and The Café at the Rubin Museum of Art in New York before he joined Junoon.

It is an upscale Indian restaurant in Flatiron district of Manhattan. It received a favorable review from Sam Sifton in The New York Times in its inaugural year and has also been awarded a Michelin star by the Michelin Guide for 6 consecutive years since 2011.

Vikas’s extensive multi-continent and multi-institutional training along with a deep-seated passion for the power of cuisine coalesce at New York City’s Junoon, where Khanna prepares soulful, elegant Indian cuisine. His cuisine takes the experience of having dinner to another level of appreciation.

Moreover, Vikas has also worked with some of the most influential and award-winning chefs of the world. Some of them are Gordon Ramsay, Eric Ripert, Bobby Flay, and Jean-Georges Vongerichten among many others.

Vikas Khanna has appeared on several TV shows and he has also hosted some of them. One of the shows he hosted is the MasterChef India season 2 in the year 2011. It is a series based on the original British version. Vikas Khanna has been hosting all the seasons of the show since then. Later, MasterChef Australia also invited him as a guest judge for one of its Season 6 episodes. Additionally, Vikas also hosted four seasons of the show Twist of Taste on Fox Life.

In addition to this, Vikas Khanna featured as a Consultant chef on the Gordon Ramsay TV series Kitchen Nightmares. He also appeared as a judge and an Indian-cuisine specialist on the two-part season finale of Hell’s Kitchen. Likewise, he also starred on Throwdown! alongside Bobby Flay. They were judges and guest chef on The Martha Stewart Show. 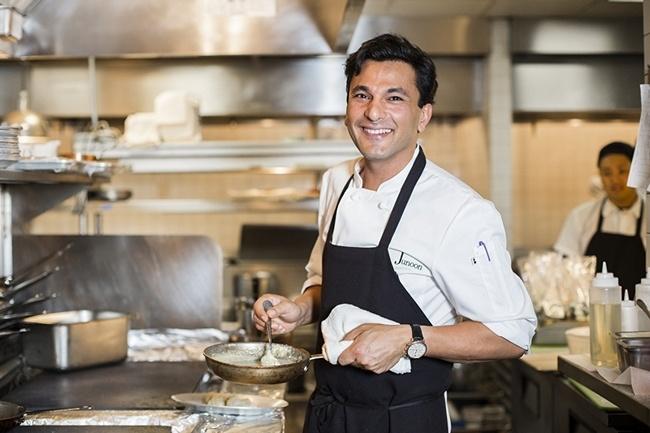 In addition to appearing on TV shows, Vikas Khanna has also produced a documentary series named Holy Kitchens. This explores the bond between faith and food and the series has been showcased at Harvard, Princeton, Columbia, and Oxford Universities and Film Festivals. Likewise, his documentary Kitchens of Gratitude was also featured at Marche du Film at the 69th Cannes Film Festival.

Furthermore, Vikas’s directorial debut is The Last Color. It is a film about the daily struggles for survival on the streets of the ancient city of Banaras, India. They released the teaser of this film featuring veteran Indian actress Neena Gupta at the 71 Cannes Film Festival. This film also made it to the final list of Oscar 2019 Nomination for Best Film.

Furthermore, the Michelin star chef launched the foundation, South Asian Kid’s Infinite Vision (SAKIV). He did it to focus on worldwide issues that demand urgent action, for example, Tsunami Relief, Hurricanes of the Gulf Coast, Haiti. In collaboration with charitable institutions like Save the Children, SAKIV has hosted many events worldwide from The Great Pyramid of Giza in Egypt to the Taj Mahal in India.

Additionally, in 2018, Vikas Khanna built the first Culinary museum of India at his alma mater Welcomgroup Graduate School of Hotel Administration, Manipal. He also founded Cooking for Life in 2001 in New York. This supports several social causes along with the world’s top chefs. Likewise, Vision of Palate is Vikas Khanna’s award-winning workshop. He developed it to educate people with visual disabilities about the sense of taste, flavor, and aromas.

Then on 14 May 2012, he cooked for a fundraiser hosted for President Obama at the Rubin Museum of Art in New York City. He is also the goodwill ambassador for Smile Foundation and additionally supports the cause of malnutrition in India. Vikas has pledged to raise 1 million US dollars for the same.

Vikas Khanna is also recognized as a famous cookbook author and has published a number of exceptional cookbooks that the world has ever seen. Amongst all cookbooks that he has written, a few of the cookbooks which received international gratitude include Savor Mumbai, Modern Indian Cooking; Shaken & Stirred – A Non-Alcoholic Drinks Book and World Feast – My Favorite Kitchen.

Vikas rose to utmost fame after he published a cookbook of 1200 pages titled “UTSAV- A Culinary Epic of Indian Festivals”. The cookbook is considered amongst the most costly books written as it costs around INR 8 lakhs for a single copy. The book weighs around 16kg and has been written with golden ink.

Vikas Khanna is a world-famous chef and hence he has received several awards and recognition in his home country as well as internationally. His previous work-place, Junoon, received Michelin star for 6 consecutive years. It is given by Michelin Guide. Similarly, Deutsche Welle News and Gazette Review listed Vikas Khanna among the “Top 10 Chefs in the world”.

The GD Goenka University awarded Vikas with a Doctor of Philosophy (Honoris causa) Degree, and DY Patil University honored him with Doctorate in the literature (Honoris causa). Similarly, James Beard Foundation Awards nominated him for his book Return to the Rivers in the year 2014.

Vikas also received the Rising Star Chef Award by Star Chefs for his role in shaping the future of American Cuisine in the year 2011, “GQ India Man of the year” award in 2012 by GQ Magazine, “Access to Freedom Award” in 2005 from SATH, and Shining Star Award from Just One Break, Inc.

Moreover, Vikas has also appeared in several magazines. People magazine featured him in the list of “Sexiest Man Alive” in November 2011. Then he appeared on the cover of Men’s Health India Magazine in 2012. Additionally, he was voted “New York’s Hottest Chef” in a poll conducted by the New York Eater blog and he received a proclamation from the New York City Council for his outstanding contribution to the city and was subsequently chosen “New Yorker of the Week” by NY1. 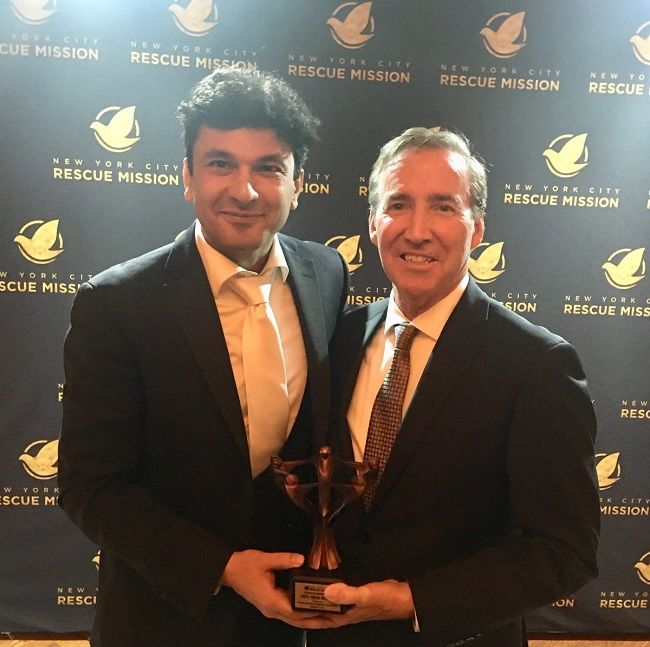 Vikas Khanna is most probably single at present. He has not shared any information on his social media that may hint to his romantic affairs. Also, Khanna might be more focused on his career as a chef and also focusing on his philanthropic works rather than involve in affairs, rumors, scandals, and controversies at present.

However, he has been a part of rumors and scandals in his past. There were rumors that he had hooked up with Shipra Khanna, the winner of  MasterChef India season 2. But Vikas was quick to deny this rumor. Similarly, there was another rumor a few years ago that he had an affair with the author, actress, and model Padma Lakshmi. However, Vikas denied this rumor as well.

The Michelin stars chef entered the house to judge a cooking task and treat the winners to mouthwatering dishes cooked by him on Salman Khan’s show Big Boss. He appeared on the show in January 2020 and fans accused him of favoritism.

Vikas Khanna took to his Instagram to share a picture of Asim Riaz feeding him while inside the house. Along with the picture, the chef wrote a long post talking about his experience in the house and vicious comments he had to face later on. After visiting the Bigg Boss house, Vikas shared a picture of Asim feeding him on his Instagram story. He also captioned he picture mentioning that Asim’s gesture humbled him.

After being accused of favoring Asim and receiving a lot of hate for the post, Vikas clarified in a series of tweets why he was moved. He wrote:

“When housemates are living in Bigg Boss for months without luxuries and when given a Michelin Star meal, it moved me that Asim fed me first. I’m not a part of any team, but we must honor a humbling moments in life. This gratitude is what defines us as human.”

Talking about the chef’s body measurement stats, Vikas stands tall at a height of 1.84 meters or 6 feet but his exact weight is unknown. Similarly, his chest-waist-biceps size is 40-32-12 inches respectively. Other than these, there is no information regarding the chef’s dress and shoe sizes. Similarly, he has dark brown hair and eyes of the same color.

The Michelin star Chef has a personal account on several social media platforms. He joined Twitter in November 2009 and so far has 2.2 million followers. Similarly, on his Facebook page, he has 1.4 million followers, and on his Instagram handle @vikaskhannagroup, the chef has shared 1,651 posts to his 1 million followers as of August 2020.

Moving on, Vikas Khanna’s net worth estimation as of January 2020 is around one million dollars. This means that Khanna has a net worth of over ₹7 crores. This is calculated on the basis of Khanna’s several assets.