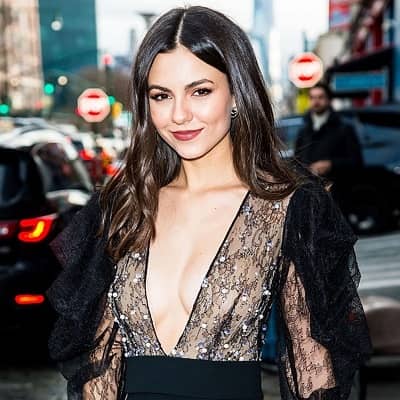 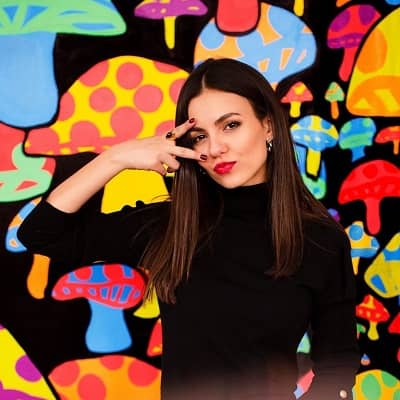 Victoria Justice was born on 19th February 1993 and is currently 27 years old. Her birth name is Victoria Dawn Justice and her zodiac sign is Pisces. Likewise, she was born in Hollywood, Florida, United States of America, and has American citizenship. Similarly, she belongs to a mixed ethnic background and follows Christianity.

Regarding her family background, she is the daughter of Zack Justice and Serene Reed. Her father has English, German, and Irish descent, and her mother are originally from the Bronx having Puerto Rican ancestry. Likewise, she has one younger half-sister whose name is Madison Grace Reed. 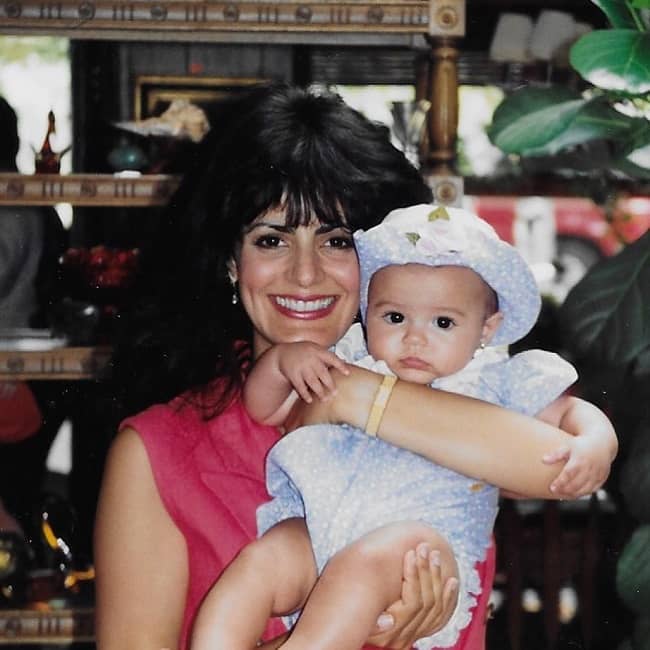 Caption: Childhood pictures of Victoria with her mother. Source: Instagram

She along with her family moved to Hollywood, California when she was 10 years old in the year 2003. Regarding her educational background, she was homeschooled. Likewise, she attended Cleveland High School but finished her diploma through the home school program again.

Victoria started her career in acting at the age of 10 years old. Likewise, she made guest appearances on the American comedy-drama ‘Gilmore Girls’. She appeared on ‘The Hobbit, the Sofa and Digger Stiles’ episode of the drama. Likewise, after her appearance in the series, she along with her family moved to Los Angeles to pursue her career in acting. Followed by this, in the same year, she guest-starred on the second episode of ‘The Suite Life of Zack & Cody’. This is an American teen sitcom airing on the Disney channel in which she played the young pageant contestant named Rebecca.

Followed by this she appeared in the 2005 short movie ‘Mary’ in which she played the role of Stella the young girl who sees visions of Mary Magdalene. Likewise, in 2005 she was accepted into the musical theatre program at ‘Millikan Performing Arts Academy’, Los Angeles. Similarly, she began doing brand endorsements for several companies including, Ralph Lauren, Gap, Guess, Mervyn’s, Peanut Butter Toast Crunch, and Ovaltine. Likewise, she played the main role of Lola Martinez on the Nickelodeon series ‘Zoey 101’. She portrayed the character of a new student aspiring to be an actress.

Similarly, she made a cameo appearance in the American comedy movie ‘When Do We Eat?’. Likewise, she played in the television film ‘Silver Bells’ and television series ‘Everwood’. Besides this, she also released a cover on the year 2007 naming ‘A Thousand Miles’ by Vanessa Carlton. Moreover, she has played in several Nickelodeon series including ‘The Boy Who Cried Werewolf’, ‘The Naked Brothers Band’, and ‘Spectacular’. Similarly, she also started her own musical show ‘Victorious’ on Nickelodeon. Moreover, she recorded several songs for the series with different young artists including Ariana Grande, JC Gonzalez, Leon Thomas III, Matt Bennett, Jake Farrow, and others.

Besides acting, she is also a singer and released her debut album on the year 2013. Likewise, her debut single ‘Gold’ was on 18th June 2013. Similarly, she appeared on the American musical reality competition ‘Lip Sync Battle’ and competed against Gregg Sulkin. Likewise, two of her songs were released on Youtube including ‘Girl Up’. Furthermore, she played the lead role on one of the popular American musical comedy television films ‘The Rocky Horror Picture Show: Let’s Do the Time Warp Again’. Similarly, she also became a member of the Recording Academy.

Victoria is a young versatile actress who has won the ‘Young Artist Awards’ in the year 2006. Likewise, she also became the ‘Best Young Ensemble Performance’ for ‘Zoey 101’. Additionally, she also won the ‘BreakTudo Awards’ on the International Instagrammer category in the year 2019. Similarly, regarding her net worth, her primary source of income is through her acting career. Likewise, her net worth according to various sources is $10 million. 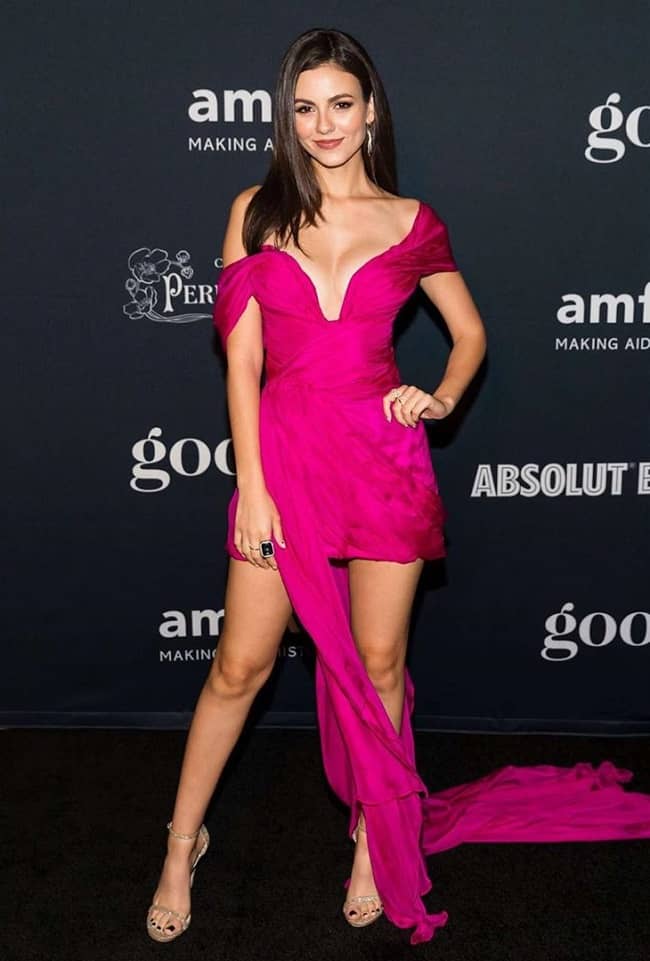 The stunning actress stands 5 feet 6 inches (66 inches) tall and weighs around 50 kg (110 pounds). Likewise, she has a slim body type and her body measurement is 33-23-34 inches. Looking at her physical appearance she has a charismatic appearance. Likewise, she has fair skin with dark brown hair and beautiful hazel brown pair of eyes. 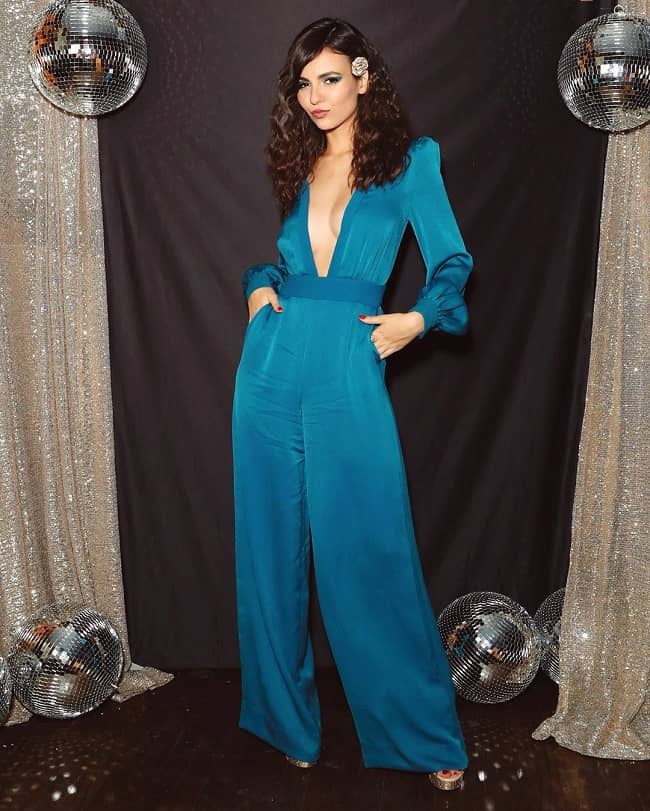