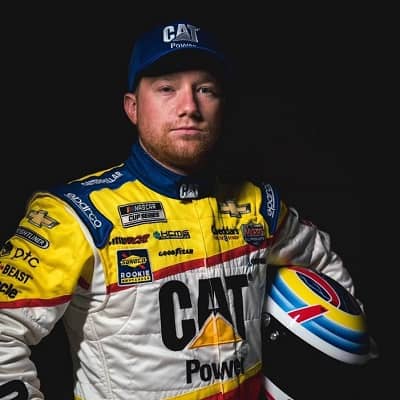 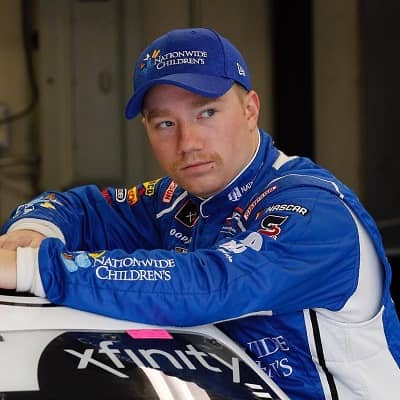 Tyler George Reddick best known as Tyler Reddick was born on the 11th of January, 1996, in Corning, California, the United States of America. According to his birth date, this NASCAR racer is 26 years old and holds an American nationality.

Moreover, he has a birth sign of Capricorn and believes in Christianity. He is the son of Clarence Reddick (father) and Geri Reddick (mother). In addition, he is the only child of his parents.

Talking about his educational career, he did his school and college education in his hometown. Further, he is a graduate and a well-educated man.

Tyler Reddick started racing at the age of four in Outlaw Karts. Soon after, he moved on to sprint cars, mini sprints, midgets, and dirt late models. He was the youngest driver to win the East Bay Winter Nationals, qualify for the pole position at the Eldora Speedway World 100, and compete in the Lucas Oil Late Model Dirt Series.

In World of Outlaws sprint car racing, he also holds the record for being the youngest driver to ever qualify for a feature race.

He made his ARCA Racing Series debut in 2012, and at Rockingham Speedway in October of that same year, he won his first professional start in the NASCAR K&N Pro Series East. He made his NASCAR Camping World Truck Series debut in April 2013 at Rockingham Speedway while racing for Ken Schrader Racing; he was in an accident during the race and came in 30th.

He crashed in Daytona to end the season in 18th place. In 2016, he would have been a contender for the title, but he was eliminated before the playoffs. His first victory of the season came in Las Vegas. On November 10, 2016, it was revealed that he wouldn’t be joining BKR for the upcoming season.

He joined Chip Ganassi Racing eight days after the BKR announcement and part-time raced the Number 42 Chevrolet Camaro in the Xfinity Series beginning in 2017. He led 66 laps and took the green flag at Kentucky Speedway in September of that year, winning by a 14-second margin over teammate Brennan Poole.

He grabbed his first Xfinity pole at Kansas Speedway a month later. On October 31, 2018, it was revealed that Tyler Reddick would change teams in 2019, moving from JR Motorsports to Richard Childress Racing.

He stated that he joined RCR to improve his chances of competing in the Monster Energy NASCAR Cup Series shortly. Reddick won his first race with RCR in the MoneyLion 300 at Talladega in April 2019. Cole Custer and Tyler got into a fight on pit road following the Kansas race.

He won his fourth pole position of the year for the 2019 O’Reilly Auto Parts 300 at Texas Motor Speedway. He led 32 laps before crashing and finishing 29th overall. He won at Homestead to win the Xfinity Series for the second time in a row.

On February 1, 2019, it was confirmed that he will make his Cup Series debut in the 2019 Daytona 500, driving the Number 31 car for RCR. He qualified for the race as an open (non-charter) car and started 39th. He was the 29th fastest driver, but due to NASCAR’s driver change rules, Gaughan began last in the race. He placed ninth at Kansas in just his second MENCS start.

He was engaged in two incidents during the race: on lap 159, as he was ready to pit, contact by Cody Ware drove him flying before being struck by Jimmie Johnson, shredding Johnson’s left side; then on lap 191, he was part in “The Big One,” which collected 20 other cars.

At the first Darlington spring race, he finished seventh, earning his first top-ten finish of the year. He nearly spent the whole race in the top five, and his 4th finish was his best result to date. He came close to winning the 2020 GEICO 500 at Talladega after holding the lead for a while but eventually lost it with four laps remaining. He came in 20th place.

He is the only rookie to have finished in the top five and won a stage so far in 2020, and as of Talladega, he is in the lead in the battle for Rookie of the Year. He said in August 2020 that he would be remaining at Number 8 for RCR for another year. Once more, this time at Homestead-Miami Speedway, he came close to winning.

He qualified for the playoffs for the first time in 2021 due to his consistency and a fifth-place result in the Coke Zero Sugar 400 at Daytona. At Bristol’s Round of 16 finish line, he was declared out of the playoffs. He was position13th in the rankings at the end of the season.

At the 2022 Daytona 500, he finished 35th to kick off the 2022 season. When Chase Briscoe lost control and forced both cars to slide on the last turn during the Bristol dirt race, he finished second to Kyle Busch. He had been battling Briscoe for the lead in the closing laps.

He defeated Chase Elliott at Road America to win the Cup Series for the first time in his career. He signed a contract with 23XI Racing on July 12, 2022, for a full-time Cup ride in 2024. He won his second race of the year at the Indianapolis Road Course in overtime by holding off the competition.

As a  professional stock car racing driver, the man has earned several trophies and awards. He won the  NASCAR Xfinity Series Champion two times in 2018 and 2019. Moreover, he was a Regular Season Champion 2017 winner.

Likewise, he earned the 2018 NASCAR Xfinity Series Rookie of the Year and 2016 NASCAR Camping World Truck Series Most Popular Driver. 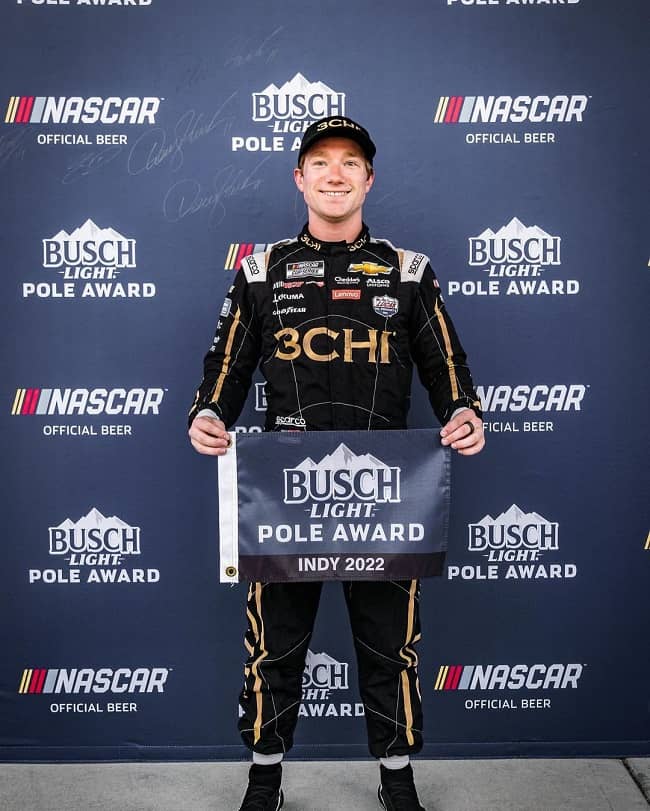 This man has not shared his exact information regarding his net worth, salary, and income. But according to some online media, he has a net worth of $1 million to $5 million.

Regarding his relationship status, he is in a relationship with his longtime girlfriend, Alexa De Leon. More than three years have passed since the couple started dating.

In December 2018, Tyler shared his love life for the first time while they were out together. They haven’t given the media any information about their initial meeting. 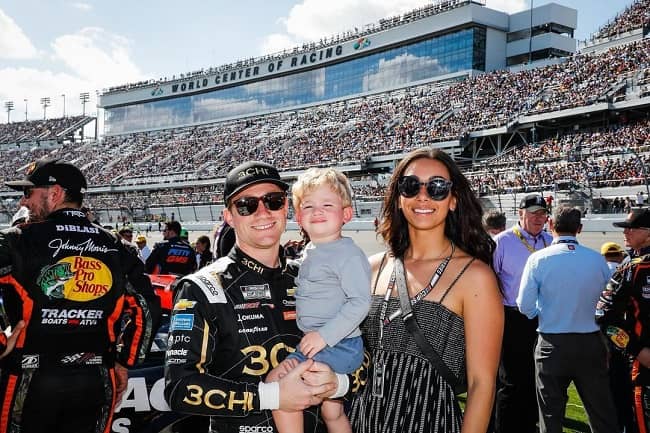 Through a post on her Instagram timeline in July 2019, Alexa revealed that she was soon to become a mother. Moreover, the couple has a son named Beau.  The couple has not yet exchanged vows or become engaged.

This professional stock car racing driver stands 5 feet 5 inches tall and weighs around 59 kg. Moreover, he has blonde hair with blue eyes color and there is no other information regarding his physical appearance. 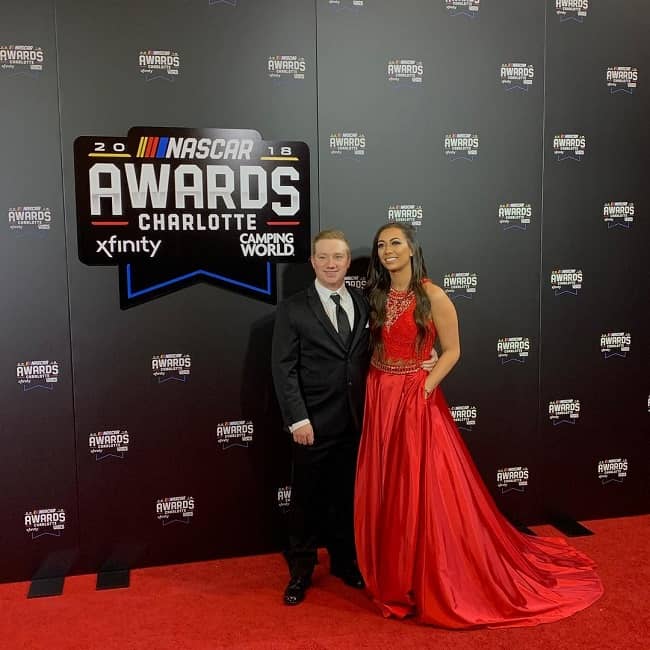 Caption: Tyler Reddick in the NASCAR Award show with his girlfriend (Source: Instagram)