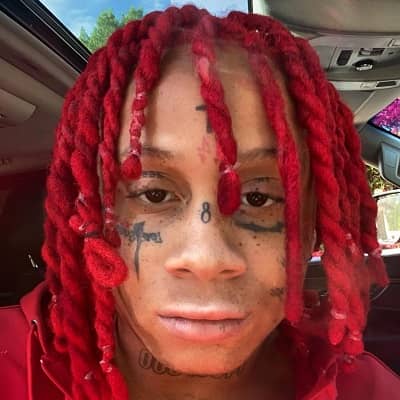 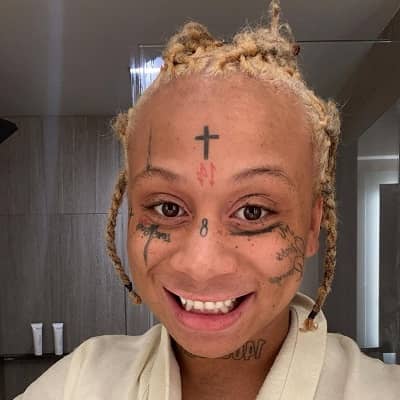 Trippie Redd also known as Dark Knight Dummo is an American rapper and singer. Trippie Redd is popular for his chart-topping singles ‘Love Scars’ and ‘Dark Knight Dummo’. Moreover, he started his career working alongside established artists such as Lil Wop and released his debut mixtape in 2017.

Trippie Redd was born as Michael Lamar White IV, in Canton, Ohio, on June 18, 1999, into a troubled household. His father was sent to prison just before Michael’s birth. The burden of bringing him up fell on his mother, who then raised him as a single mother. His mother worked hard to make ends meet, but this was not enough to keep him away from the streets, which were riddled with criminal elements. He got involved in petty crimes and drug peddling at an early age. His mother was a big music fan. The musical vibes in his house inspired Trippie to become a musician. Over time, he began idolizing artists such as Lil Wayne, KISS, Gucci Mane, and Nirvana. Currently, he is 23 years old.

Trippie had an elder brother who was also into making a career in music. However, he later died in a car crash. Soon, he started taking his music career more seriously. In 2014, at the age of 15, he started making music and uploading them online. Two of his early songs that were out online were ‘New Ferrari’ and ‘Sub-Zero’. While both the songs were successful in the local clubs of Ohio, Trippie was not very happy with them. He soon took them down from the internet. After his high-school graduation, Trippie moved to Atlanta. There, he met rapper Lil Wop and his career received its first breakthrough. 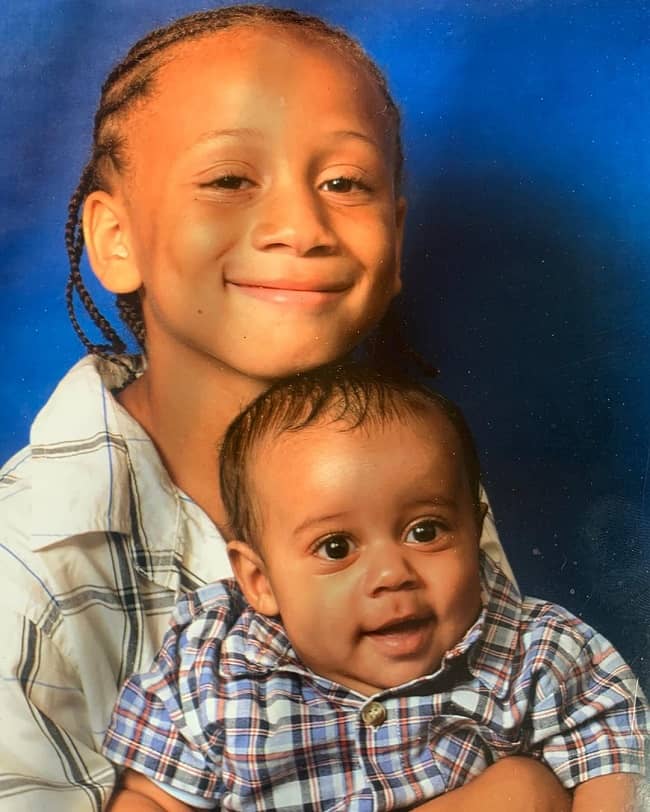 Before meeting Lil Wop, Trippie had not even been inside a professional recording studio. Wop introduced him to the world of rap and music production. Both of them, along with another rapper named Kodie Shane, started working together. Soon, they came up with some good work. Some of the initial albums that Trippie worked on were ‘Awakening my Inner Beast’, ‘Beast Most’, and ‘Rock the World Trippier. After the success of these projects, Trippie started receiving much better offers and ended up in Los Angeles. There, he signed a contract with ‘Strainge Entertainment,’ now known as ‘Elliot Grainge Entertainment’.

This was the true beginning of Trippie’s music career. Soon, Trippie started working on his debut mixtape, ‘A Love Letter to You’, which was out in May 2017. It is rare for a newcomer to reach the ‘Billboard 200’ charts, but Trippie’s mixtape debuted at the 64th spot on the chart. The mixtape was first out on ‘SoundCloud’ and was subsequently picked up by ‘iTunes’, too. A single from the album, ‘Love Scars’, became a major hit across nightclubs and radio stations. The single was eventually certified “platinum” by the ‘Recording Industry Association of America’ (RIAA).

Within several months of its release, the single earned more than eight million views on ‘YouTube’. Soon, Trippie started getting offers to feature in the albums of other rappers. He collaborated on the song ‘Fuck Love’ from XXXTentacion’s album ‘17’. The song became a big hit and debuted at the 28th spot on the ‘Billboard Hot 100’ chart. Trippie then started working on his next mixtape, ‘A Love Letter to You 2’, which was out in October 2017. Just like his previous mixtape, this one, too, was an instant success. The mixtape reached the 34th spot on the ‘Billboard Hot 100’ chart. The same year, he collaborated with his mentor Lil Wop, for the album ‘Angels & Demons’.

In December 2017, the song ‘Dark Knight Dummo’, which was the result of a collaborative effort between Trippie and Travis Scott, was released. Trippie is featured as the main artist in the song. The song reached the 72nd spot on the ‘Billboard Hot 100’ chart. It was the first Trippie song with him as the lead artist to debut that high on the list. He then released singles such as ‘18’ and ‘TR666’ by the end of the year. He collaborated with artists such as Rich Brian, Scott Storch, and Kris Wu. In March 2018, he officially confirmed that he was working on his debut studio album and that Lil Wayne would feature as a guest on it.

The album, titled ‘Life’s a Trip’, was out in August 2018. The album featured collaborations with some of the biggest names in the industry, such as Travis Scott, Diplo, and Young Thug. However, Lil Wayne was nowhere to be seen on the list, contrary to what Trippie had claimed. The main issue that was repeatedly raised was the fact that the album had no fresh sound and that most of the songs were too personal and repetitive. However, there were some good reviews, too, that claimed Trippie was capable of producing a great album. Despite its lukewarm critical success, the album debuted at the fourth spot on the ‘Billboard Hot 100’ chart. 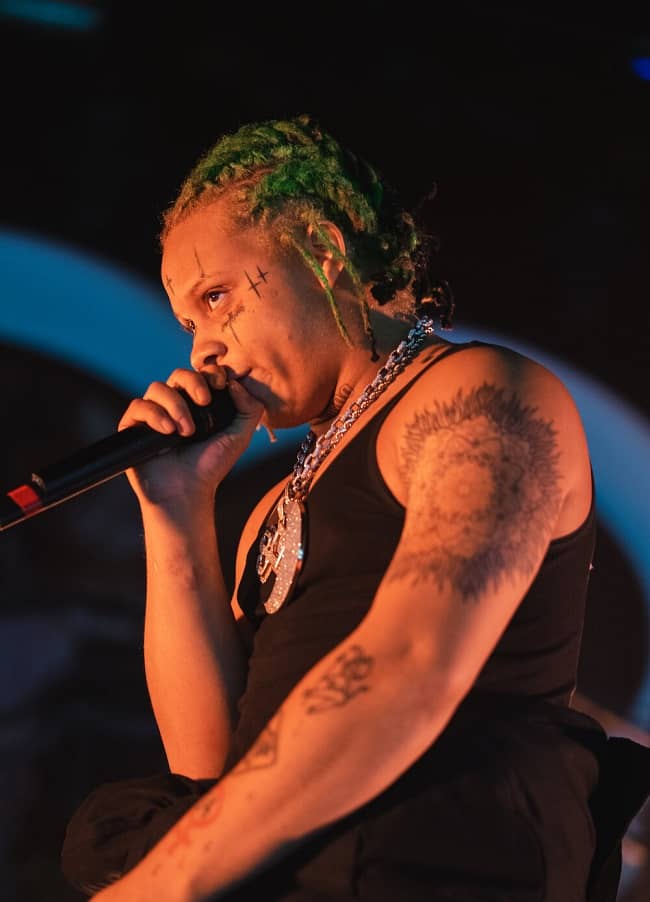 White has stated he is of Irish, Native American, and African American descent. In March 2017, he claimed that he had a net worth of $7 million and that he had purchased a house for his mother for $300,000.

Trippie had a relationship with the beautiful Latina Instagram model Mulan Vuitton. Initially, in 2017, Trippie broke up with Mulan stating that she cheated on him but, in 2018, Trippie started showing interest in Mulan again, which Mulan objected to in her live Instagram streaming. Trippie started dating musician Aylek (aka Angvish on Instagram) in 2017. During their relationship, Trippie shared many videos with Aylek and threatened those who directly posted messages on her Instagram account. This created an issue between the couple leading to their break up in 2018 and Trippie went back to Mulan.

Trippie started dating rapper Coi Leray in 2019. Interestingly, his girlfriend is also a hip-hop artist with viral singles like Pac Girl to her credit. The pair are in talks to collaborate on a new album. Then after, on 26th March 2019, their break-up was confirmed; DJ Akademiks shared an intimate video, featuring Trippie’s new girlfriend. In the clip, viewers could see him sharing intimate kisses with his girlfriend Coi Larey. 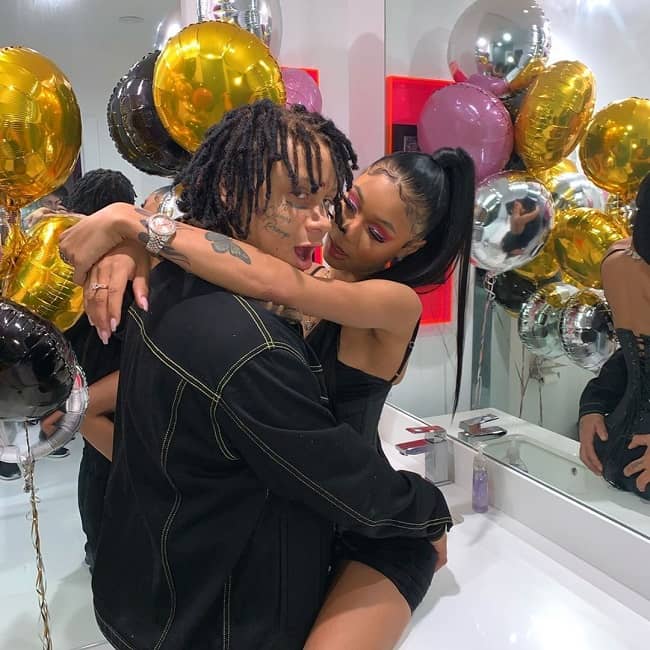 Trippie Redd has had several feuds in his career. His most infamous feud was with rapper 6ix9ine. Trippie claimed that 6ix9ine was a pedophile. As a result, he got beaten up by one of 6ix9ine’s men. Trippie then made a live video as the feud intensified. He also had a minor feud with XXXTentacion. However, the feud was short-lived and was resolved soon after. White was arrested in Cobb County, Georgia following an assault on rapper FDM Grady in late May 2018.

According to Grady, White and rapper Lil Wop insulted Grady’s girlfriend, leading Grady to draw a firearm briefly before engaging in a fist fight with White. At that point, Grady was attacked by four men including White and Wop. White was arrested on charges of affray (public fighting), criminal trespass, and simple battery. A few weeks later in early June, White was again arrested in Georgia on an assault charge for allegedly pistol-whipping a woman.

Regarding Trippie Redd’s body measurement, he is 5 feet 6 inches or 168 cm tall. He weighs 63 kg or 139 lbs. Similarly, his body measurements are 38-13-32 inches. Trippie Redd has many tattoos all very his face and body as well. Moreover, he has a pair of dark brown eyes with black hair. Trippie has a slim body type. Also, Trippie Redd often colors his hair into different colors.

Talking about his presence on social media platforms, he is quite active there. He has an Instagram account with 11.6 million followers and a Twitter account with 1.6 million followers. Similarly, he has a Facebook page where he has more than 878 K followers. Trippie even has his own YouTube channel where he has 2.82 million subscribers. He seems quite famous on social media platforms.