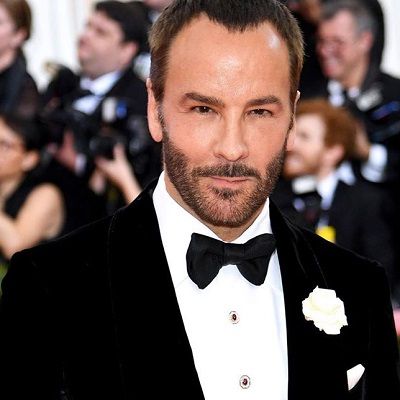 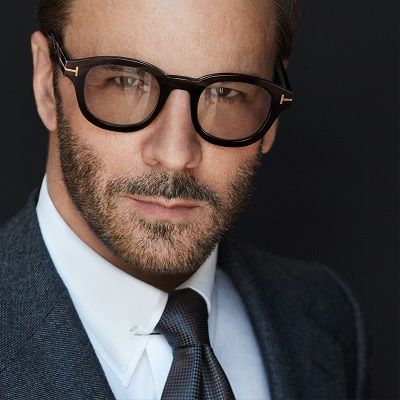 Thomas Carlyle Ford is also known as Tom Ford. He was born on August 27, 1961, in Austin, Texas, to mother Shirley Burton and father Thomas David Ford. However, he grew up with his sister Jennifer Ford outside Austin, in the suburbs of Houston, Texas, and in San Marcos. Meanwhile, when he was just 11 his family moved to  Santa Fe, New Mexico. His current age is 61 years old.

Likewise, he had two early role models in fashion; his mother and grandmother. Tom holds an American nationality.

While in Sante Fe, Tom enrolled in  St. Michael’s High School but soon moved to Santa Fe Preparatory School, and he graduated in 1979. He entered Bard College at Simon’s Rock. But soon dropped and moved to New York, and studied art history at New York University. While studying at NYU, he came across Studio 54 and started focusing on acting for television commercials. Consequently, he dropped out of NYU after only one year.

After that, he joined Parsons The New School for Design in New York City for studying interior architecture. During his last year at New School, Ford interned at Chloe’s press office in Paris for a year. This raised his passion for fashion and design but nonetheless, graduated with a degree in architecture in 1986.

Straight after graduation, Ford got a job as a design assistant for American designer Cathy Hardwick. He says he called Hardwick every day for a month in hopes of securing the job. In 1988, he worked at the clothing brand, Perry Ellis. But he was more inclined towards European fashion which according to him is classier. After 2 years in Perry Ellis, he flew to Milan where Gucci hired Ford as the brand’s chief women’s ready-to-wear designer.

Back then, Gucci was just another Italian fashion house and struggled financially. Ford’s contribution to Gucci was remarkable and soon in 1992, he took over as Gucci’s design director. Within a matter of months, he expanded menswear and other apparel sections and by 1993, he became in charge of eleven product lines. At the time, Mello was the face of the company. Thus, his appearance dwarfed Ford’s contributions. He got the position of creative director in 1994. By 1999, Gucci was almost bankrupt, was valued at $4.3 billion, and mostly credited to Ford. When Gucci acquired the house of Yves Saint Laurent in 1999 Ford became the head creative director of that brand too. Moreover, his difference fragrance perfumes “Black Orchid”, “Lost Cherry”, “Out Wood”, “Tobacco Vanille”, “Ombre Leather”, etc. are quite famous.

In 2004, Ford left the Gucci group. Soon he launched a new line of accessories, and menswear, introduced under the ‘Tom Ford’ label. His first store was inaugurated on April 12, 2007, in New York City. In the subsequent years, several stores have been opened in London, Tokyo, Milan, and Los Angeles.

In March 2005, Ford announced to launch of Fade to Black; his film production company. He made his directorial debut with ‘A Single Man’, based on the novel by Christopher Isherwood in 2009. His attachment to movie production continued as he directed Nocturnal Animals, based on the Austin Wright novel Tony and Susan in 2015.

In 2005, he launched his own fashion company, Tom Ford Brand. His brand offers menswear, eyewear, and beauty products. He created a notable buzz for his new company when he posed on the cover of a 2006 issue of Vanity Fair wearing Tom Ford Brand menswear. He was sandwiched between Keira Knightley and Scarlett Johansson, both of whom posed nude.

In May 2019, he designed an evening gown which featured in the 2019 Met Gala in New York as worn by Hollywood actor Gemma Chan on the runway and staircase of the event.

Besides fashion designing, he made a debut into the film industry in 2001 with his film, A Single Man. He starred alongside Colin Firth and Julianne Moore. He has also co-written and directed the film, based on the novel by Christopher Isherwood.

In 2016, he wrote, directed, and co-produced Nocturnal Animals, a psychological thriller. The following film was based on a 1993 novel by Austin Wright.

Tom’s work has always been original and eyeful. His dedication brought him this first recognition in 1995 when he received the International Award by the Council of Fashion Designers of America. 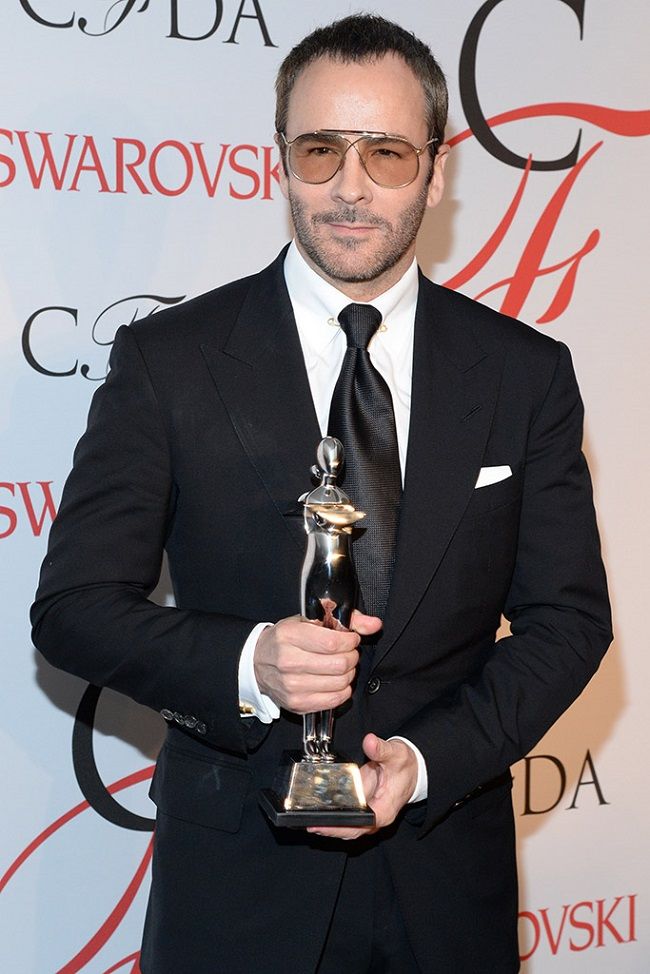 In the context of his Filmmaking career,  his  ‘A Single Man’ won the Queer Lion at the Venice Film Festival. In addition, the very movie along with  ‘Nocturnal Animals’  have been nominated for the Oscar Awards.

As creative director of Gucci and YSL and creator of the Tom Ford brand in fashion, Tom Ford has earned himself a noble amount of riches. As for now, he has a net worth of $500 million. Currently, he has not signed brand endorsement deals with any brands. However, it is sure that he will surely be endorsing some of the top brands from around the world real soon in the future.

Talking about sexual orientation, Ford is gay. He married journalist and former editor in chief of Vogue Hommes International, Richard Buckley. The two met in 1986 and were together for 18 years. Finally, the couple exchanged vows in 2004. The couple has a son, Alexander John “Jack” Buckley Ford, born in September 2012 via gestational surrogate. 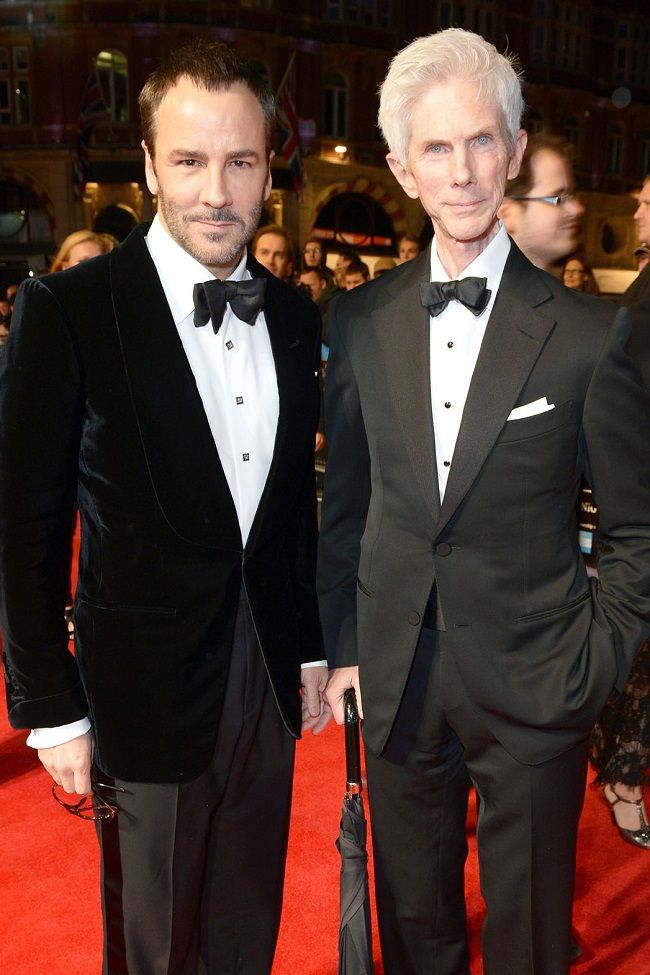 Once, Tom Ford has been criticized for using naked women in several ad campaigns. Various journalists stated that the ads implied vulgar, sexist, or objectified women. One of the ads featured a nude woman carrying a bottle of the perfume between her legs. Likewise, another ad featured a naked woman ironing a man’s pants while he read a newspaper. The ad was even banned in Italy.

Ford was in controversy for objectifying females by using naked women in various ad campaigns. To clarify, he stated that he is an “equal opportunity objectifier” and is “just as happy to objectify men”.

Besides there was a rumor on Twitter about Tom Ford making disparaging remarks about Melania Trump, reportedly saying “I have no interest in dressing a glorified escort who steals speeches and has a bad taste in men,”.  But he disagreed the statement and shade light on the fact that he believed First Lady and the President in the White House need to be wearing clothes made in America.

The 58-year-old fashion guru, Ford is a well-built man. He stands a height of 6 feet and an inch tall in 81 kg body. He has dark brown hair color coexisting with light brown eyes. 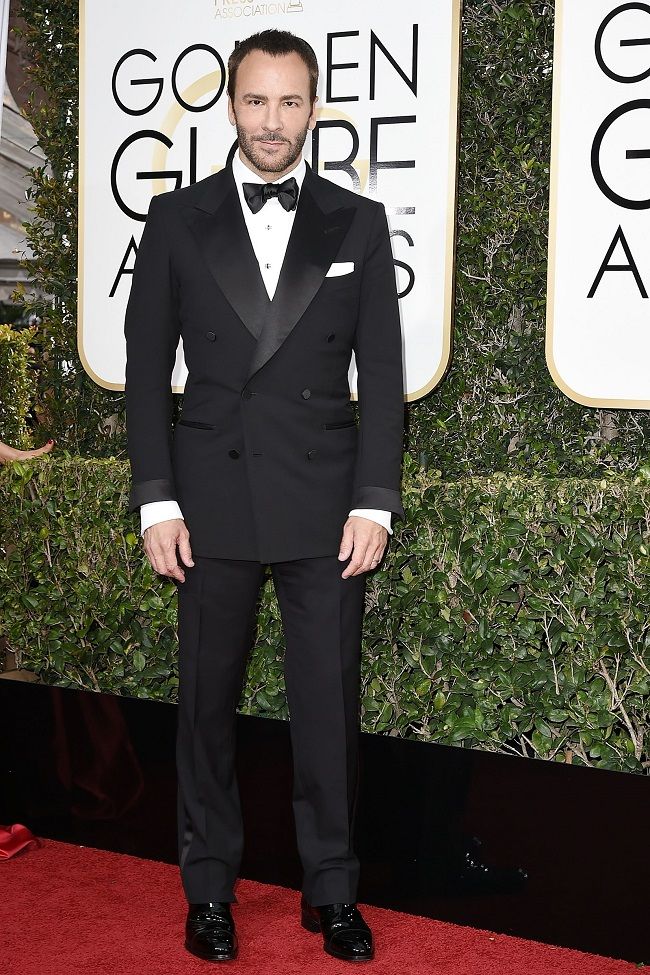 Tom Ford, a remarkable name in the current era of fashion, is widely popular in social media sites. He mostly uses social media to promote his designs and products. Likewise, he goes by the name Tom Ford in all social media sites, including YouTube with 52.4K subscribers, Instagram with 9.6M followers, Facebook with 1.8M followers, and Twitter with 125.3K followers. In addition, he has a personal web page which is online access to his products.