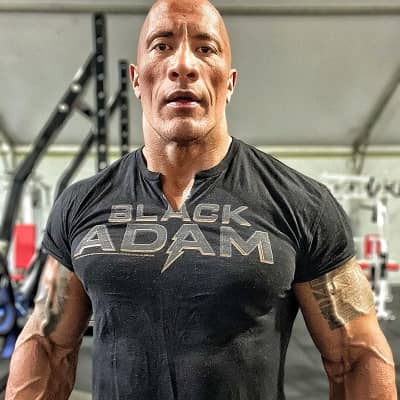 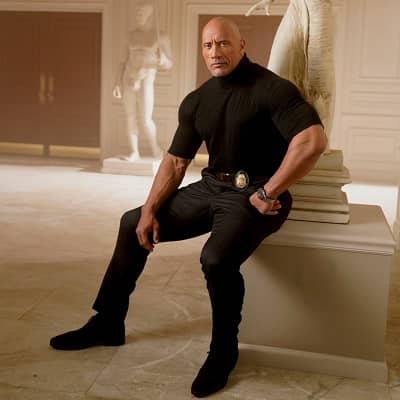 More Facts of The Rock

The Rock is an American-Canadian actor, producer, businessman, retired professional wrestler, and former American football and Canadian football player. Consistently ranked among the world’s highest-paid actors. Johnson made the Time 100 Most Influential People in the World list in 2016 and 2019. Moreover, he is the co-owner of the American football league, the XFL.

The Rock was born as Dwayne Douglas Johnson on May 2, 1972, in Hayward, California. He is the son of Ata Johnson (née Maivia; born 1948) and former professional wrestler Rocky Johnson (born Wayde Douglas Bowles; 1944–2020). Johnson is half-Black Nova Scotian (African) and half-Samoan (Polynesian). His father was a Black Canadian, from Nova Scotia. Also, part of the first Black tag team champions in WWE history along with Tony Atlas. His mother is Samoan and the adopted daughter of Peter Maivia, who was also a pro wrestler.

Growing up, Johnson lived briefly in New Zealand with his mother’s family, where he played rugby. Maivia’s wife, Lia, was the first female pro wrestling promoter, taking over Polynesian Pacific Pro Wrestling after her husband’s death in 1982, until 1988. Through his grandfather Maivia, Johnson is considered a non-blood relative to the Anoa’i wrestling family. In 2008, Johnson inducted his father and grandfather into the WWE Hall of Fame. Moreover, he was arrested multiple times for fighting, theft, and check fraud before the age of 17. 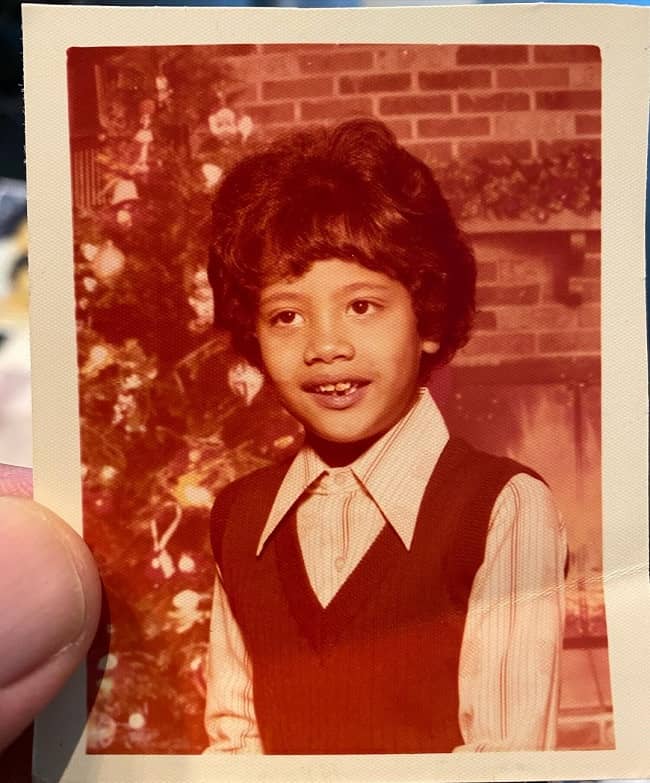 After his football career, Johnson decided to pursue a career as a professional wrestler. Veteran wrestler Pat Patterson got Johnson several tryout matches with the World Wrestling Federation (WWF) in 1996. Under his real name, he defeated The Brooklyn Brawler at a house show on March 10 and lost matches to Chris Candido and Owen Hart. After wrestling at Jerry Lawler’s United States Wrestling Association as Flex Kavana and winning the USWA World Tag Team Championship twice with Bart Sawyer in the summer of 1996, Johnson signed a WWF contract. He received additional training from Tom Prichard, alongside Achim Albrecht and Mark Henry.

With few prospects in professional football, Johnson turned to wrestle, debuting in the WWF against the Brooklyn Brawler in Texas. After a couple more matches, including a tag team win with Bart Sawyer, the WWF signed him under the name Flex Kavana. A year later, he joined The Nation of Domination, eventually taking over its leadership and calling himself The Rock. He later joined another band of elite wrestlers known as The Corporation and began a notorious feud with Steve Austin. Also known as “The People’s Champ”. The Rock went on to win a combined 17 WWF/WWE titles over his acclaimed career.

Outside the wrestling ring, The Rock launched a successful acting career, dropping the stage name and simply going by Dwayne Johnson. He first made a big splash as the Scorpion King, a supernatural bad guy, in 2001’s The Mummy Returns. Johnson returned to this role the following year for The Scorpion King. Trying his hand at comedy, he appeared in 2005’s Be Cool with John Travolta and Uma Thurman and 2007’s The Game Plan.

Johnson’s acting career to continued to thrive through his appearances in such films as Driver (2010) and Fast & Furious 6 (2013). In 2014, he starred as the titular strong man in Hercules. Johnson also returned to wrestling from time to time, including a 2014 appearance with Hulk Hogan and Stone Cold Steve Austin at WrestleMania 30.

In 2015, Johnson dominated the big screen with two big action films. He appeared in Furious Seven and starred in San Andreas. Johnson also debuted his first dramatic comedy series that same year, playing Spencer Strasmore. A retired pro footballer turned financial planner, on Ballers. In 2016, after teaming up with Kevin Hart for the action-comedy Central Intelligence. Johnson voiced the demigod Maui for the Disney animated hit Moana. He was a busy man in 2017, taking on starring roles in The Fate of the Furious, a big-screen adaptation of the 1990s lifeguard series Baywatch and Jumanji: Welcome to the Jungle.

The good vibes continued into 2018, with Jumanji racking up the ticket sales en route to becoming the actor’s highest-grossing film to date. Johnson also managed to stand out during the blitz of advertising accompanying the Super Bowl in February, debuting a trailer for the movie Skyscraper, in which he partakes in death-defying stunts with a prosthetic leg. That same day, Johnson announced he would be hosting a 10-episode unscripted competition show, The Titan Games, to “create a platform that gave everyday people the opportunity to change their lives and do something extraordinary”.

Next up for the action star was Rampage, based on the popular 1980s arcade game, which hit theaters a few months before the July release of Skyscraper. Johnson returned to his wrestling roots by appearing as himself in Fighting with My Family (2019), based on the true story of female wrestling champion Saraya “Paige” Bevis. Later that year, he was back in action mode with the Fast & Furious spinoff Hobbs & Shaw, alongside Jason Statham. Johnson has also opened up about some of his early-life struggles, including his family’s eviction from their Hawaii home when he was just 14. He told the UK publication The Express that his mother tried to commit suicide by walking into traffic the following year, an incident that left him battling depression. 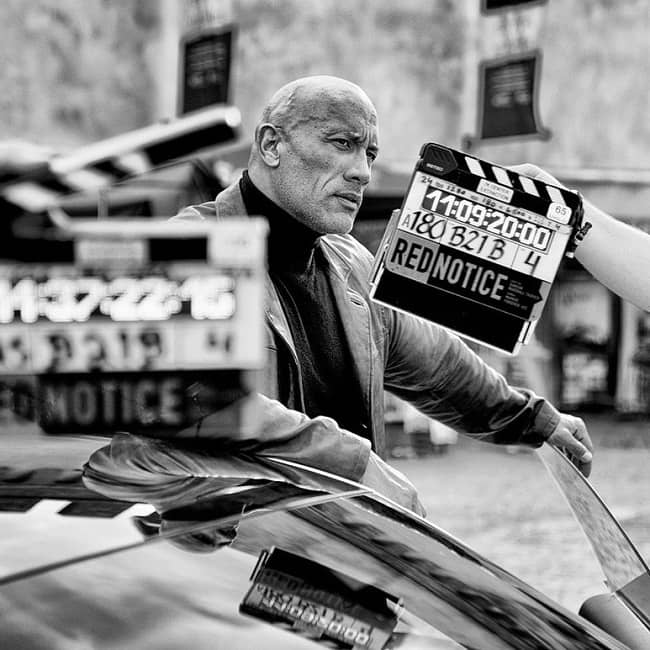 Caption: The Rock getting ready to shoot (Source: Instagram)

The Rock has a current net worth of around $320 million. That number is ten times bigger than it was just 11 years ago. he earned approximately $20 million per film – nearly all box office hits – that number won’t be shrinking anytime soon. The Rock is also in charge of the company Seven Bucks Productions, a digital, creative, and production team that gets involved in all of his movies. He also has endorsement deals with titans like Apple, Ford, and Under Armour. He is also into activism and philanthropy so, he quite often does donations with her wife.

In August 2020, Johnson announced that he teamed up with his wife and a sports management company to buy the XFL, which went bankrupt earlier in the year, for $15 million. “The acquisition of the XFL with my talented partners, Dany Garcia and Gerry Cardinale, is an investment for me that’s rooted deeply in two things—my passion for the game and my desire to always take care of the fans,” Johnson said in a statement. “With pride and gratitude for all that I’ve built with my own two hands, I plan to apply these callouses to the XFL, and look forward to creating something special for the players, fans, and everyone involved for the love of football.”

In August 2019, Johnson tied the knot with his longtime girlfriend, singer/music producer Lauren Hashian. She is a singer and songwriter and co-wrote the song Only You for hip-hop artist, YaBoi Shad. Lauren’s other big claim to fame is that she was a finalist on the 2005 competition, R U That Girl, on UPN which was hosted by TLC’s Chili and T-Boz. The two are parents to daughters Jasmine Lia (b. December 2015) and Tiana Gia (b. April 2018). Lauren met Dwayne Johnson in 2006 while he was filming his movie, The Game Plan. At the time, Dwayne was married to his first wife, Dany Garcia in 1997. And then he divorced in 2007 and had one child with, Simone Alexandra.

However, after an amicable split between the two, Dwayne and Lauren started dating. In February 2020, the WWE announced that Johnson’s daughter Simone began training at the WWE Performance Center, making her the first fourth-generation WWE Superstar. On May 16, Johnson announced she had signed a contract with WWE. In September 2020, during the COVID-19 pandemic, Johnson revealed on Instagram that he, his wife, and their two daughters had all tested positive for COVID-19. He also said they contracted from family friends, but had made a full recovery. 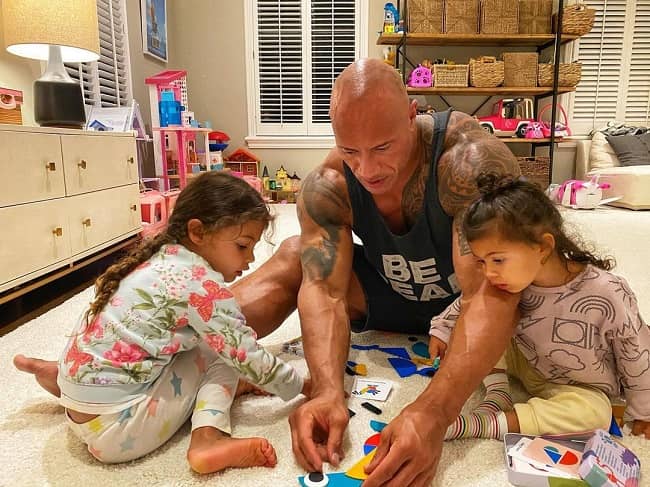 Caption: The Rock with her daughters during quarantine (Source: Instagram)

Talking about Dwayne Johnson’s body measurement, he is 6 feet 2 inches or 1.88 m or 188 cm tall. Johnson has a weight of 119 kg or 262 lbs. Similarly, his chest size is 50 inches, his waist size is 35 inches, and his biceps size is 23 inches. Dwayne also has a pair of dark brown eyes. And looking for her hair, he is bald. Being a retired wrestler, footballer, and actor, he has a huge muscular body and looks very fit.

Coming to the social media part, Dwayne is highly active there. He is active on Instagram, Twitter, and Facebook as well. On Instagram, he has 211 million followers and on Twitter, he has 15 million followers. Likewise, he has more than 58 followers on his Facebook page. Johnson even has his own YouTube channel with 5.46 million subscribers. In 2016, Johnson started a YouTube channel called “The Rock” with the help of online personality Lilly Singh.