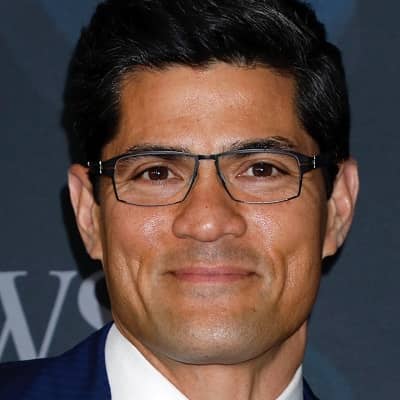 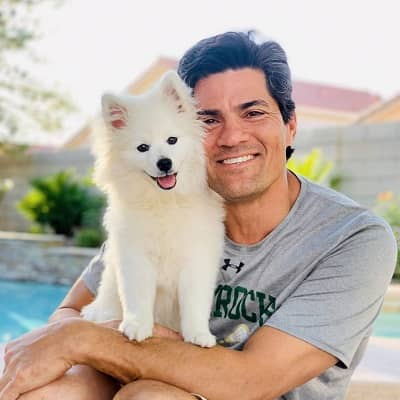 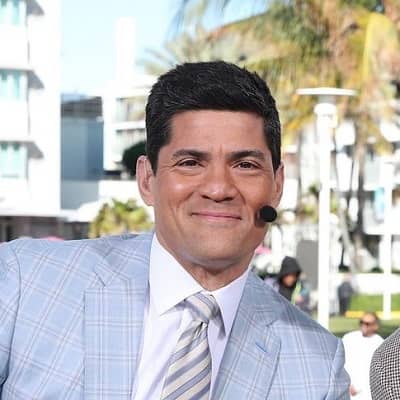 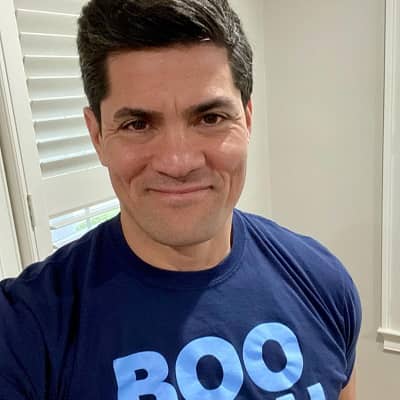 Tedy Bruschi was born on June 9, 1973, and he is currently 47 years old. Tedy hails from San Francisco, California, and his zodiac sign is Gemini. His full name is Tedy Lacap Bruschi. Talking about his family, Tedy’s paternal grandparents were from Bedonia in Italy. Likewise, his mother is of Filipino ancestry. Therefore, Tedy has an ethnic background of Italian-Filipino.

Moreover, Tedy is one of three children. One of his siblings is sister Natalia Bruschi, who is a hairstylist, make-up artist, Celebrity Men’s Groomer, and beauty expert. Moreover, Tedy has a stepfather named Ron Sandys who was a professional tennis player 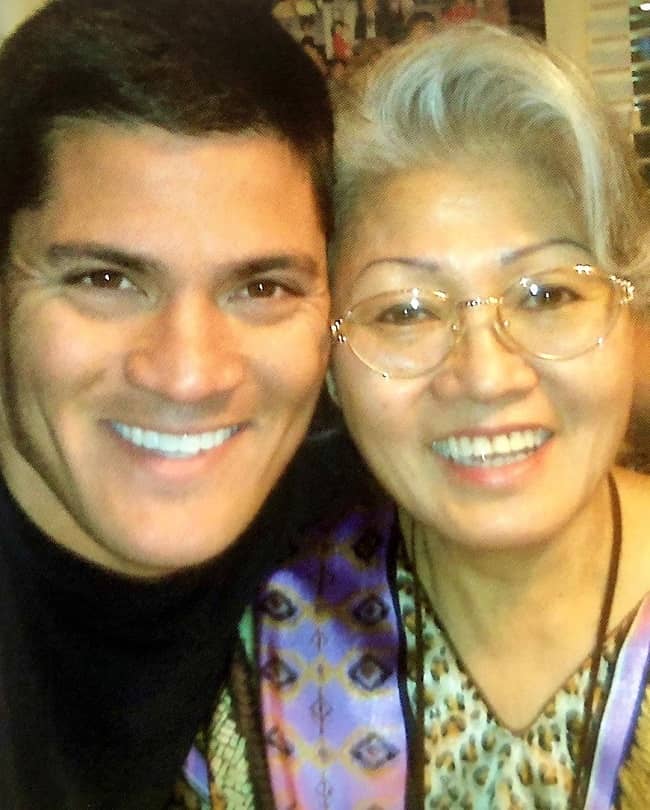 Caption: Tedy Bruschi posing for a photo with his mother. Source: Instagram

Regarding his educational journey, Tedy attended Roseville High School in Roseville, California. There, Tedy lettered in high school football, wrestling, and track and field. Tedy was also an all-conference selection as a defensive tackle for the Roseville Tigers. Later on, he attended the University of Arizona. There, Bruschi played for the Arizona Wildcats football team from 1991 to 1995.

Professionally, Tedy Bruschi is a former professional football player. Tedy was a linebacker in the National Football League (NFL) for 13 seasons. At present, Tedy serves as the senior advisor to the head coach at the University of Arizona.

Moreover, Tedy played college football for the University of Arizona. He was also a two-time consensus All-American. The New England Patriots drafted Tedy Bruschi in the third round of the 1996 NFL Draft. Subsequently, Tedy played his entire professional career with the aforementioned team. Similarly, Tedy won three Super Bowls and he was also a two-time All-Pro selection.

Throughout his college career of 4 years from 1991 to 1995, Tedy Bruschi was recognized as a consensus first-team All-American in 1994 and 1995. The footballer also bagged the 1995 Morris Trophy as the Pacific-10 Conference’s best defensive lineman.

The professional American footballer retired after 13 seasons in the NFL. He confirmed the news regarding his retirement on August 31, 2009. He shared this at a press conference where the New England Patriots head coach Bill Belichick and owner Robert Kraft were also present. 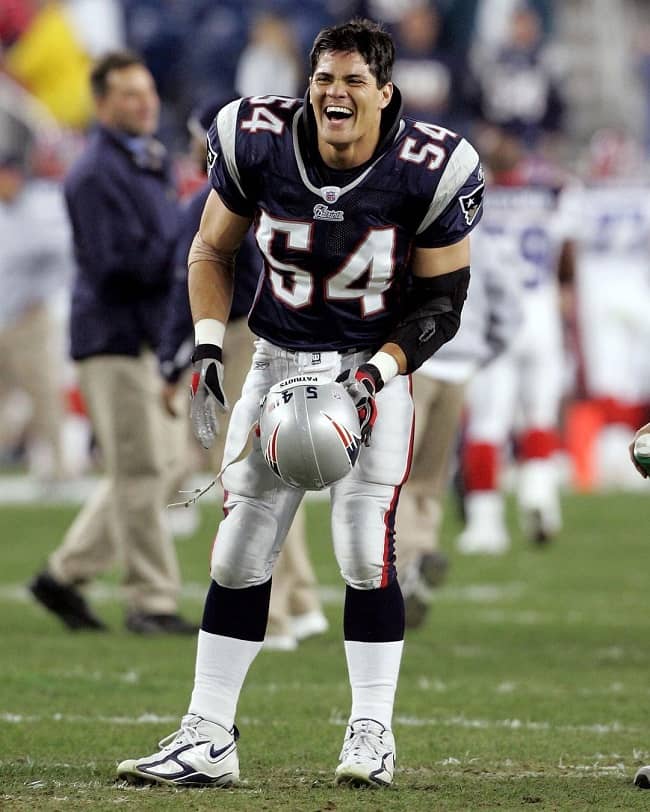 Following his professional retirement, Tedy Bruschi then joined ESPN as an analyst. His number was worn by six-time Pro Bowl guard Brian Waters in the year 2011. From 2012 onwards, Dont’a Hightower wears Tedy Bruschi’s #54. On December 6, 2010, the New England Patriots held a special ceremony in Tedy’s honor during halftime on Monday Night Football.

Likewise, on 1st February 2015, Tedy Bruschi became an honorary captain at Super Bowl XLIX. Throughout his professional football career, Tedy Bruschi has bagged numerous awards and trophies. The former player won the title of Super Bowl champion thrice. He then took home the Second-Team All-Pro title twice in 2003 and 2004. Further, Tedy won to Pro Bowl title in the year 2004.

Moreover, Tedy was also the NFL Comeback Player of the Year in 2005 and the Best Comeback Athlete ESPY in 2006. Likewise, Tedy took home the Morris Trophy in 1995 and the Pac-10 Defensive Player of the Year in the same year. Prior to this, the former footballer won the title Consensus All-American twice in 1994 and 1995. Similarly, he also bagged the title First-team All-Pac-10 thrice from 1993 to 1995 consecutively.

Prior to this, in 2006, Tedy took home the “Senator Paul E. Tsongas Award” for Exemplary Public Service. In the year 2004, Tedy made the AFC Pro Bowl and Second-Team Associated Press All-Pro. He was also on NFL.com’s All-Interview Team.

Then a year later, Tedy was Associated Press NFL Co-Comeback Player of the Year. In 2005, he was also voted the “Ed Block Courage Award”, the “Maxwell Football Club’s Spirit Award”, as well as the “AFC Defensive Player of the Week”. He was part of NFL.com’s All-Interview Team this year too. Moreover, the same year, Tedy was also on USA Today’s All-Joe Team. 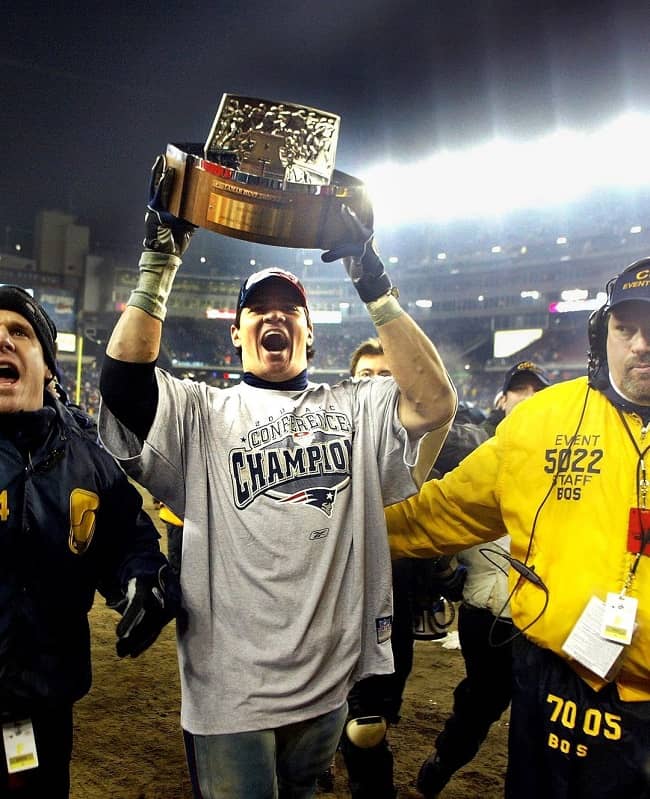 Caption: Tedy Bruschi posing for a photo with his trophy. Source: Instagram

Besides being a footballer, Tedy Bruschi is also an accomplished saxophonist. Tedy has played with the Boston Pops. He is also an author who wrote a book titled Never Give Up: My Stroke, My Recovery, and My Return to the NFL. This was in the year 2007 and this book is about Tedy’s experience with his stroke and his recovery.

In his book, Tedy talks about how his family confronted the reality of his life-threatening affliction. He also mentions the initial plans to retire from the NFL, and also of the moment, where Tedy told his wife he was ready to return to football. Tedy later earned a share of the “Comeback Player of the Year Award” as well as the Patriots recipient of the “Ed Block Courage Award”.

Furthermore, Tedy is a spokesman for the American Heart Association. He is also the founder of Tedy’s Team. It is a foundation that raises funds for stroke research. Tedy was named NFL.com’s All-Interview Team for accessibility to the media in the year 2007.

In the years 2012 and 2019, Tedy ran in the Boston Marathon. The former footballer was also inducted into the Sacramento Sports Hall of Fame in the year 2014 in California. Then on July 5, 2019, his foundation “Tedy’s Team” revealed that Tedy Bruschi suffered a second stroke. 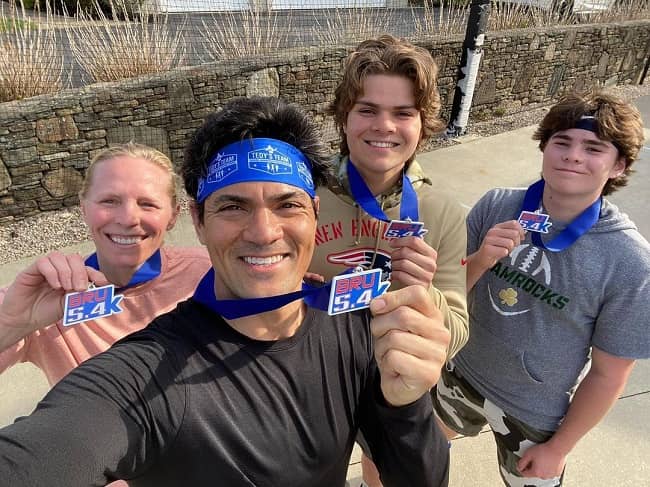 Caption: Tedy Bruschi posing for a photo with his wife and sons. Source: Instagram

Tedy Bruschi’s listed height is 6 feet 1 inch or 1.85 meters and his listed bodyweight is 247 lbs or 112 kgs. Moreover, in the year 1991, Tedy missed the first three games of the season because of a pinched nerve in his neck. The former football player broke his left thumb and the association redshirted him soon after he returned and started two games as a true freshman.

Talking about his social media presence, Tedy Bruschi joined Twitter in May 2018 and so far has over 62.4K followers on his @TedyBruschi account. Likewise, he is available on Instagram under the username @tedybruschi. This account boasts 231k followers as of May 2021.

Moving on, Tedy Bruschi has an estimated net worth of around $12 million US dollars. Despite his popularity and fame, he has not received any brand endorsement deals as of now. However, it is possible that in near future, he might start to endorse brands.