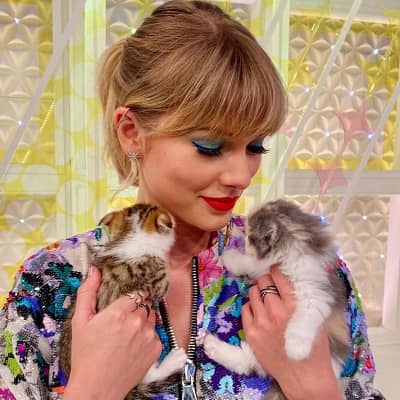 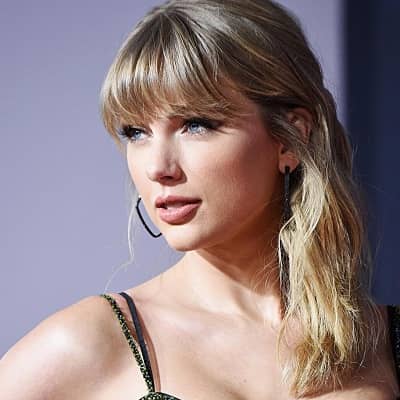 Taylor Swift is a popular singer, songwriter, and actress from the United States. Moreover, Taylor Swift is a Grammy Award-winning singer-songwriter, who made a big impression on the country music community in 2006 and has since gone on to become one of the most successful artists.

Taylor Alison Swift best known as Taylor Swift was born on the 13th of December, 1989, in West Reading, Pennsylvania, the United States of America. According to her birth date, this pop singer is 32 years old and holds an American nationality.

Moreover, she has a birth sign of Sagittarius and belongs to mixed ethnicity of Scottish-German descent. She is the daughter of Scott Kingsley Swift (father) and Andrea Gardner Swift (mother).

Professionally, her father was a financial advisor, while her mother was a homemaker and previously worked as a mutual fund marketing executive.  She grew up with her younger brother named, Austin.

Talking about her academic career, she attended preschool and kindergarten at Alvernia Montessori school. Later, she moved to The Wyndcroft School. She then attended Wyomissing Area Junior/Senior High School after her family moved to Wyomissing, Pennsylvania.

At the age of nine, she developed a passion for musical theater and appeared in four plays at the Berks Youth Theater Academy. Her interest in country music changed as a result of being influenced by Shania Twain’s songs.

When she was 12 years old, local musician and computer repairman Ronnie Cremer helped her with her first attempts at songwriting and taught her how to play the guitar.

She moved to Hendersonville, Tennessee, when she was 14 years old to pursue a career in country music. Moreover, she went there for Hendersonville High School. She adapted to homeschooling and switched to the Aaron Academy due to her busy touring schedule.

She was signed by Big Machine Records in 2005, and her self-titled first album was released publicly in October 2006. She was the youngest person to win the 2007 Songwriters/Artist of the Year award from the Nashville Songwriters Association. Her holiday album Sounds of the Season: The Taylor Swift Holiday Collection was released in 2007.

Later, her  second studio album, Fearless, was released in 2008 and featured the hits “Love Story” and “You belong with me.” Swift’s first concert tour, the Fearless Tour, took place in 2009. She was named Artist of the Year in 2009.

Her “You Belong with Me” video won the MTV Video Music Award for Best Female Video. The Grammy Awards and American Music Awards recognized her record “Fearless” as Album of the Year and Best Country Album.

Acting debut and other albums

Additionally, she debuted as an actress in a 2009 episode of CBS’s CSI: Crime Scene Investigation. Valentine’s Day, which was released in 2010, was Swift’s first film. Speak Now, her third studio album, was released in October 2010.

She was recognized by the Guinness Book of World Records in 2010 for having the fastest-selling female artist digital album and being the first woman to have 10-track debuts on the Billboard Hot 100.

She also received recognition as an Artist of the Year, a Woman of the Year, and an Entertainer of the Year from the Academy of Country Music in 2011 and 2012, among other accolades (2011). Speak Now World Tour: Live, Swift’s debut live album, was published in 2011. 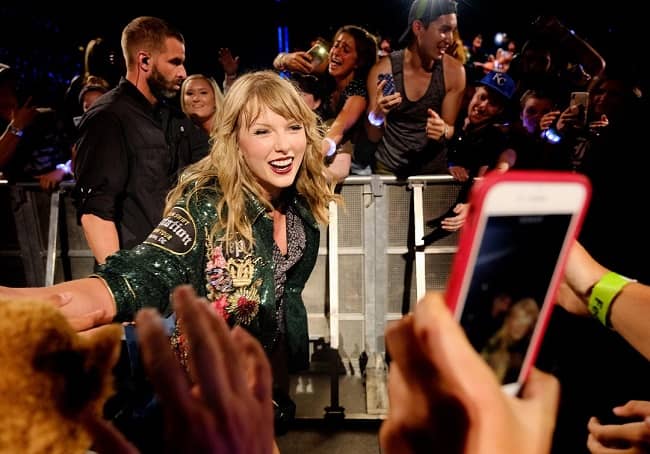 Her fourth studio album, Red, was made publicly available in October 2012. Guinness World Records recognized her first lead single from Red as the fastest-selling song in digital history, and it became the album’s lead single. She was also recognized by the Guinness Book of World Records for becoming the first female to have album openings that sold two million copies.

In March 2014, she made a shift to New York. In October 2014, She released 1989, her fifth studio album, which features the singles “Shake It Off,” “Blank Space,” “Bad Blood,” and others. It was recognized as her final record for country music. She was the first to have three albums sell more than a million copies in their first week of availability, according to Guinness World Records.

Reputation, her seventh studio album was released in November 2017. She made history by selling one million copies of four albums in a single week in the US. Moreover, she appeared on the album “Bigger” in 2018. She was also chosen for the musical “Cats” movie adaptation.

In addition, she has co-authored and written several songs for other musicians. She also worked with several other musicians, including B.o.B, Boys Like Girls, Kendrick Lamar, Zayn Malik, Tim McGraw, and John Mayer. She also contributed to several film soundtracks.

Her other studio album, Lover, was released in 2019, and she called it “a love letter to love itself.” That same year, she appeared in Cats, a film adaptation of Andrew Lloyd Webber’s hugely famous stage performance. The documentary Miss Americana (2020) is about Taylor’s life and work. Later, she released folklore in 2020 with little notice.

Her eighth studio album, a departure from her previous pop-inspired work, received praise for its thoughtfulness and restraint, and it won the Grammy for album of the year. She also has directed the musical films Folklore: The Long Pond Studio Sessions (2020) and All Too Well: The Short Film (2021).

She has been recognized as a songwriter by the Nashville Songwriters Association and the Songwriters Hall of Fame. Moreover, she was also named to Rolling Stone’s list of the 100 Greatest Songwriters of All Time in 2015. 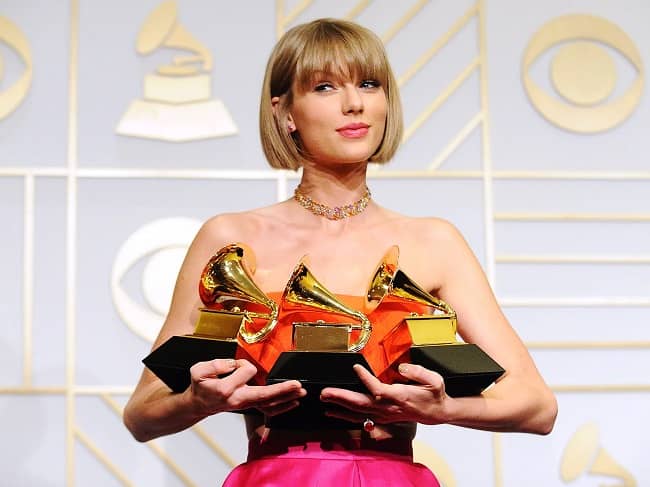 As a singer, songwriter, and actress, she has a net worth of $400 million with a salary of $150 million over a year. She has collected this amount sum from her profession.

Currently, this pop singer is single and unmarried. She has had multiple affairs publicly, but none of them have been with well-known celebrities. In 2008, she started dating Joe Jonas of The Jonas Brothers.

However, the relationship came to an end when Joe started dating Camilla Belle.  Soon after, she dated Calvin Harris, Jake Gyllenhall, Harry Styles, Taylor Lautner, and John Mayer. She was seen in 2016 with Tom Hiddleston, but she subsequently revealed that their relationship had ended.

Her mother was given a cancer diagnosis in August 2016. She was so upset that she started a campaign to encourage routine cancer screenings to detect the deadly disease early. At the moment, this pop singer is not a part of controversy or rumors.

Taylor stands 5 feet 10 inches and weighs around 54 kg. Moreover, this pop singer has blonde hair with blue eyes color. Moreover, her body measurements measure 34-24-33 inches. She wears a shoe size of 8.5 and a bra cup size is 32B. 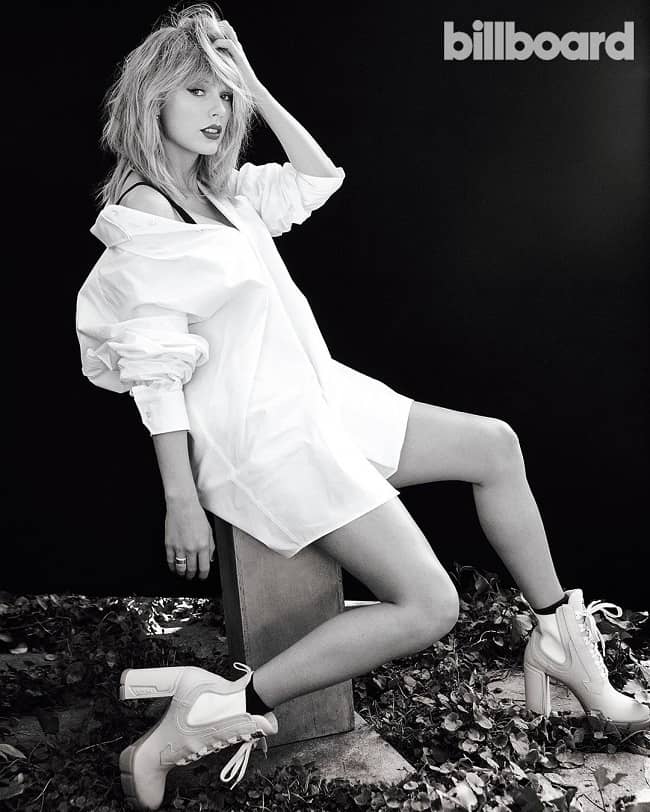