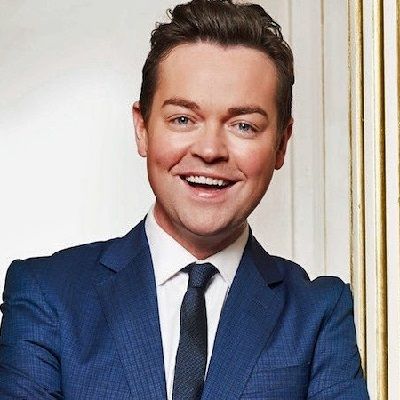 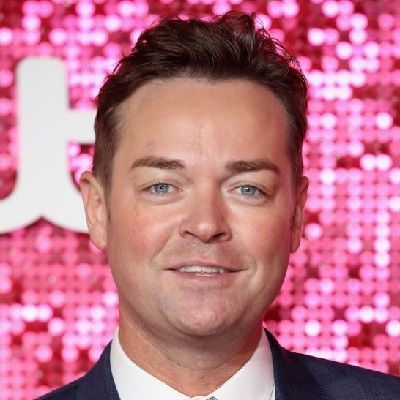 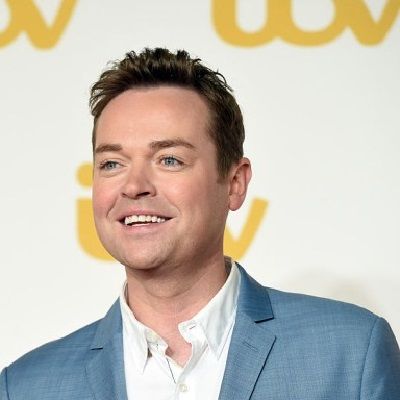 Stephen Mulhern is a British TV presenter, entertainer, host, and magician. Stephen Mulhern has hosted and presented several world-famous shows like “The Big Quiz”, “Britain’s Got More Talent”, “Catchphrase”, “Tricky TV”, and “Big Star’s Bigger Star” among many others.

Stephen Mulhern was born Stephen Daniel Mulhern on 4 April 1977. He is currently 44 years old and his birthplace is in Stratford, London, England. Further, his parents are his father Christopher Mulhern, and his mother Maureen Mulhern.

He also has a younger sibling brother named Vinny Mulhern. Talking about his educational background, he graduated from St Bonaventure’s, a voluntary aided school in London, England.

He stands tall at a height of 1.83 meters or 6 feet. However, other body measurement details like his weight, chest-waist-hip, biceps, dress size, shoe size, etc are not available. Similarly, he has blue eyes and brown hair color.

Stephen Mulhern has personal accounts on several websites. He joined Twitter in April 2009 and so far has gained 650.1k followers.

On his Instagram handle @stephenmulhern, he has shared 188 posts as of August 2020 and gained 494k followers. Similarly, his official Facebook page has 160.3k followers and his self-titled Youtube channel has 1.18k subscribers.

Stephen Mulhern gained his interest in comedy and magic from his father. His father would teach him a trick right before bedtime when he was 11 years old. His family would spend their summer holidays at Butlin’s Minehead in Somerset.

There, he began performing in public. He also became the youngest member of The Magic Circle, which brought about an appearance on Blue Peter in a piece about Harry Houdini.

He was later suspended from The Magic Circle for revealing a magic trick on Finger Tips, a children’s TV show. But they eventually lifted the suspension. After leaving school, he started creating magic shows under the title Stephen’s Mega Mad Magic Show.

He also spent two summers working as a Butlins Redcoat in Minehead, and got winter jobs at Hamleys and Harrods where he met Princess Diana. He did all these while also auditioning for television appearances.

Michael Barrymore turned him down at the age of 18 for My Kind of People. But eventually, he won another television talent show called The Big Big Talent Show hosted by Jonathan Ross.

As a result, when he was 20 years old in the year 1997, the Royal Variety Performance at the Victoria Palace Theatre invited him to take part in it and hence he performed in front of Her Majesty Queen Elizabeth II.

He then released a number of children’s magic sets and videos, got jobs on the Disney Channel, and then on CITV alongside Holly Willoughby on Saturday Showdown. His television shows since have included The Quick Trick Show and more recently Tricky TV.

In 2005, he created and presented Freaky, the Channel 4 magic show. They also credited him as executive producer of the show.

Moreover, in 2006, he performed a magic routine in an episode of The Slammer and came in second place. His 2010 entertainment show Magic Numbers featured magic and illusions during the phone-in process.

He has also put his name to numerous magic set for retail sales and worked closely with Paul Andrews, the producer in creating magic for his TV and live shows.

He does not work with a regular assistant for his illusion performances but rather prefers to work with a range of guest celebrity assistants.

Most notable one of them all is his former Saturday Showdown co-host, Holly Willoughby. Holly has assisted him on many occasions in a variety of illusions including being sawed in half. 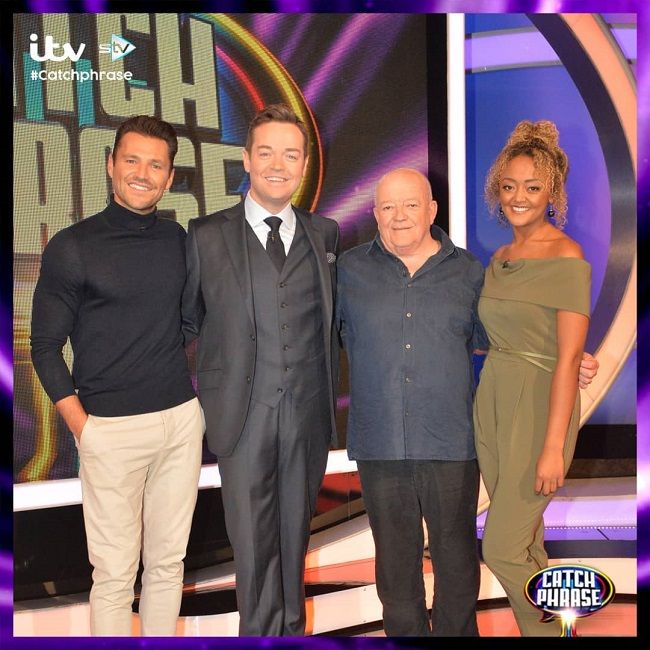 Caption: Stephen Mulhern with the staffs of “Catchphrase.” Source: Instagram

Stephen Mulhern appeared in several stage performances. One of them is the stage version of Grease as Danny Zuko. Then in 2005, he appeared on Celebrity Stars in Their Eyes as Robbie Williams.

He also appeared as a regular slot at Butlins holiday parks, where he once was a Redcoat during the summer season with a show of comedy, magic, and gunge.

Talking about his theatrical performances, he appeared in pantomime at the Fairfield Halls Theatre, Croydon in the year 2002. He then starred in a production of Sleeping Beauty with Wendy van der Plank at the Futurist Theatre, Scarborough in 2003.

Also, in 2010, he starred in Aladdin at the Marlowe Theatre in Canterbury. For this, he played the lead role of Aladdin.

Then in 2011, he appeared as Buttons in a pantomime production of Cinderella at the Marlowe Theatre in Canterbury with actor John Partridge as Prince Charming.

Moving on, in 2012, he played Idle Jack in the Woking production of Dick Whittington with Ashleigh and Pudsey. He also played Buttons in Cinderella at the Hawth in Crawley in December 2013.

Moreover, in 2014-15, he was in Sleeping Beauty at the Hawth Crawley. It was a huge hit with over 27,000 people attending in total. Also, in 2015, he returned to Cinderella at the Ashcroft Theatre.

Additionally, in 2016, he starred in “Dick Whittington” at the Marlowe Theatre in Canterbury, alongside Vladimir Georgievsky from Britain’s Got Talent. Then he played Muddles in “Snow White” at Hawth Theatre in Crawley in December 2017.

Diving more into this personality’s professional life, he has also worked in Radio and Television. On 5 August 2012, he started as a co-presenter of Sunday breakfast from 9 am to 12 pm with Emma Willis across the Heart Network.

They occasionally presented the Heart London Breakfast show when regular hosts, Jamie Theakston and Emma Bunton are away.

Moreover, he also started presenting on CITV in 1998. He co-hosted four series of Finger Tips with Fearne Cotton from 2001 to 2003 and then with Naomi Wilkinson in 2004.

Stephen presented the children’s show Tricky TV from 2005 to 2010 and also co-hosted Holly & Stephen’s Saturday Showdown with Holly Willoughby from 2004 to 2006. The show was originally called the Ministry of Mayhem.

From 2006 to 2007, he hosted the ITV2 spin-off Dancing on Ice: Defrosted, while Phillip Schofield and Holly Willoughby hosted the main show.

Then, from 2007 to 2019, he hosted ITV2 spin-off Britain’s Got More Talent. This show aired immediately after the main ITV show, which Ant & Dec hosts. 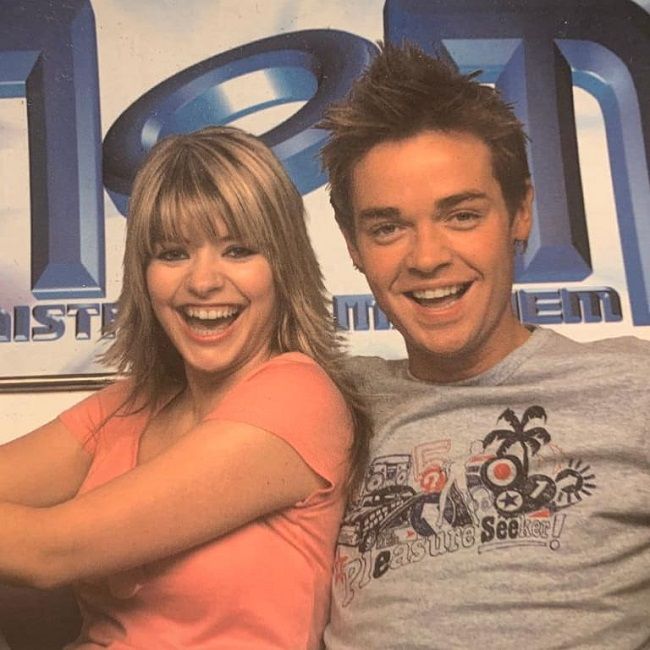 Since 2013, he has become associated with the word ‘unbelievable’ which slowly became his catchphrase.

It is usually used on Britain’s Got More Talent as he walks offscreen at the end of a section, with Ant & Dec often mimicking him and is also known for saying “doosh!”. From 2009 to 2011, he then narrated the entertainment show Animals Do the Funniest Things.

Additionally, he regularly presented inside The Hub. It is a small segment on the ITV daytime show This Morning. He most recently hosted the segment on Thursday and Friday mornings. However, they previously hosted the show on Wednesdays and Thursdays.

It was until the departure of Matt Johnson in the summer of 2013. He has occasionally presented the main show standing in for the regular presenters.

Moreover, in 2010, he also hosted the primetime game show Magic Numbers on ITV. He has also hosted numerous episodes of The Big Quiz. And since April 2013, Mulhern presented a revived version of the ITV game show Catchphrase.

In September 2013, he started presenting ITV’s Big Star’s Little Star. It is a show that sees celebrities and their children compete to win up to £15,000 for charity.

Similarly, on the 27th of October 2013, he began hosting a live Sunday morning show called Sunday Side Up on ITV. Then on 21 December 2013, he hosted entertainment special The Illusionists. On 14 September 2014, he guest-hosted an episode of Sunday Night at the Palladium.

In addition, he presented the primetime ITV reality series Get Your Act Together in early 2015. Then on 5 February 2015, he began presenting the panel show Reality Bites.

In 2015, he presented The Magic Show Story, a one-off special and The Saturday Night Story, a two-part series focusing on Saturday night television. The same year, he also presented Pick Me!, a daytime game show for ITV’s annual charity telethon Text Santa.

In March the same year, he became a victim of the Ant & Dec Undercover segment on Ant & Dec’s Saturday Night Takeaway.

This involved Ant & Dec turning up at his pantomime whilst he was in a production of Sleeping Beauty and landing him in all sorts of trouble. They did troublesome stuff like wetting his costumes, ruining his magic tricks, and mixing his music records up.

Then in February 2016, he became the presenter of the ‘Ant vs Dec’ segment on Ant & Dec’s Saturday Night Takeaway after replacing Ashley Roberts. The same year, he presented Go for It and co-hosted The Next Great Magician alongside Rochelle Humes.

On 12 April 2018, he was selected to host The National Lottery Draws. Fast forwards to 2019 and he presented In For A Penny. It is based on a segment he presents on Ant & Dec’s Saturday Night Takeaway of the same name. 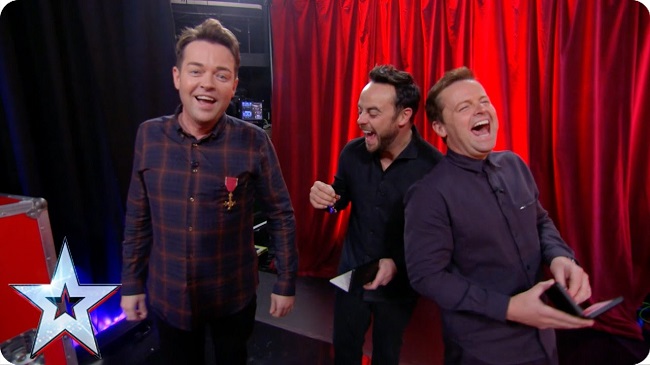 Stephen is currently single. Previously, he dated Emma Barton, a 44-year-old British Actress. They parted ways after staying together for 9 years and 7 months since 2008. Moreover, he is not fond of online dating as he stated.

Moving on, his net worth estimation is around $3 million dollars. Further, he also has a house in West London and also in Brighton, on the seafront.