Stella Nina McCartney was born on 13 September 1971 at Lambeth, London, England. And currently, she is 49 years old. Her mother is Linda Louise McCartney, an American musician, photographer and animal rights activist; and her father is Sir Paul McCartney, an English musician, and former Beatle. Likewise, she has a sister Mary, brother James and two half-sisters, Heather and Beatrice. The McCartney siblings traveled the world with their musician parents and their group named Wings during their childhood. Almost all of the McCartney family are life long vegetarians. Hence, her vegetarian upbringing reflected massively in her works. Her mother Linda passed away in 1998 battling breast cancer.

Despite being a well-known family, her parents wanted her and her siblings to attend local state schools in East Sussex. One of the schools was Bexhill College. Additionally, she attended Ravensbourne College of Design and Communication and Central Saint Martins College of Arts and Design. She interned at Christian Lacroix at the age of 16 and honed her cutting skills at Edward Sexton. In a gist, Stella focused her schooling on becoming a fashion designer.

Stella McCartney began her journey to Fashion Designing by designing her first jacket at the age of 13. She builds her foundation in designing from Ravensbourne College and Central Saint Martins in the early 90s. Being a lifelong vegetarian, she bans the use of leather and fur in her brands. She is very vocal about animal rights and supports PETA, an NGO working for the welfare of animals. Similarly, she owns a fashion brand under her name in collaboration with Kering since 2001. However, the business partners parted ways in April 2018 when she decided to purchase and take the reins of the fashion empire. She launched her first menswear collection in November 2016, being inspired by her father. Along with fashion designing, McCartney also launched her perfume in 2003 and a skincare line in January 2007 named CARE. She launched the Stella McCartney Cares Foundation. It is a charitable foundation dedicated to breast cancer, the disease that took her mother away.

She has bagged numerous awards for her incredible work in the Fashion industry. She won “Designer of the Year” from many Award Ceremonies including Vogue (2000), Glamour (2004), Elle (2007), British (2007) and Spanish (2008) Style Awards. Moreover, she also received the “Woman of Courage” Award in 2000 for her work against the dreadful disease – cancer.  Similarly, she had even achieved the title of “Organic Style Woman” in 2005 and “Green Designer” Award in 2008.

Along with these awards, she has also achieved some remarkable honors. The most incredible one of them all is the Officer of the Order of the British Empire (OBE), which was awarded by the British Queen Elizabeth II on 26 March 2013. She was awarded the OBE for her services to fashion. Another of such achievements is the “Special Recognition Award for Innovation” at the Fashion Awards (2017).

Similarly, Glamour magazine also recognized her as their “Woman of the Year” in 2009. In the same year, she was also honored by the National Research Development Corporation (NRDC) and listed as Times 100 most influential people in the world by Times magazine.

As reported by the Celebrity Net Worth, her estimated net worth is $75 million. Likewise, she owns a fashion brand, Stella McCartney, which operates 51 stores at locations like Manhattan, Tokyo, LA, and London.

Stella McCartney’s husband is Alasdhair Willis, the creative director of shoe wear brand ‘Hunter’. The couple tied the knot at Mount Stuart House on 30 August 2003. Likewise, they had their first child in 2005. They named him Miller Alasdhair James Willis. Furthermore, they have three more children, namely Bailey (2006), Beckett (2008), Miller, and Reiley (2010). 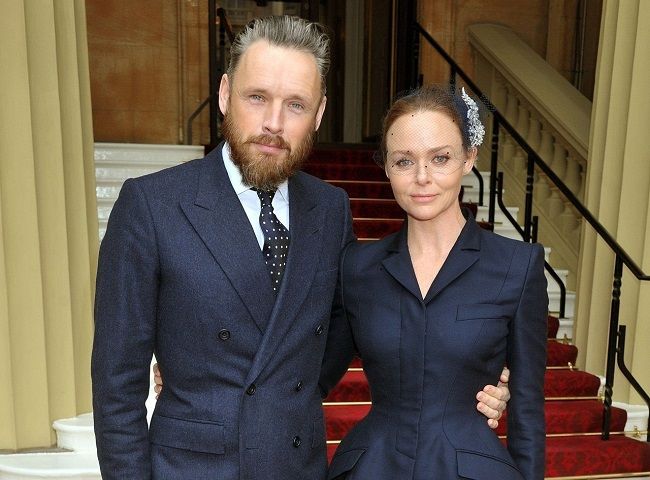 Stella has a slim body standing height of  5 feet 5 inches tall and weighing 55 kg.  Likewise, her dress size is 4, and shoe size 8. Similarly, her chest-waist-hip measurement is 34-26-35 inches and her bra size is 32C. Moreover, her distinctive facial feature is her blue eyes and natural blonde hair.