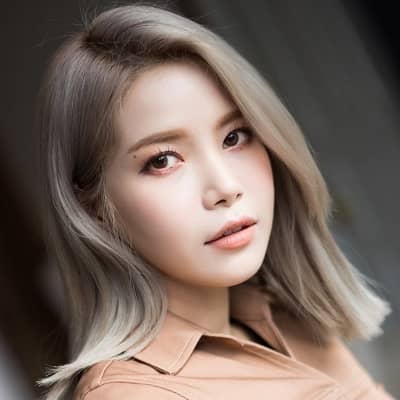 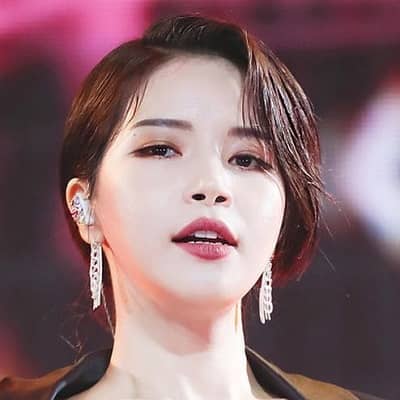 Solar is a K-pop idol, actress, and Youtuber. Solar is a band member of the Mamamoo who is popular for her songs like “Spit It Out”, “Solar Emotion”, and “Honey Bee” to name a few. Similarly, she also has an on-screen presence in TV series and shows like ‘Imaginary Cat’, ‘We Got Married’, and ‘Boss In The Mirror’. She owns a YouTube channel named 솔라시도 solarsido with 3.08M subscribers.

Solar’s real name is Kim Yong Sun. She is the household name of Kim. She is also known by the name of Mommy, Yongkong, and Squirtle. She was born on  February 12, 1991, and has turned 30 years old. She was born in  Gangseo-gu, Seoul, South Korea.  She is a South Korean by nationality and belongs of South Korean descent. Kim is an Asian and follows Christianity as her main religion. Kim was born with the sun sign of Pisces.

Reflecting on her family, Kim has a family of four. She has not disclosed the identities of her parents but she stays with her family in Gangseo-gu. Furthermore, she has an older sister named, Yong-hee.

Regarding her private life, she is very close to Red Velvet’s Irene and Apink’s Chorong. She plays the piano and likes to listen to Lil’ Wayne’s song. She owns a dog named Jjing. She is scared of cats and due to the fear of ghosts, Kim is regarded as a scaredy-cat of MAMAMOO’s. Our beloved  K-pop idol wanted to be a Flight attendant when she was young.

Reflecting on her educational background, she attended a Local High School. While talking about her higher education, she holds a degree in music from Morden K Music Academy University. She also has attended Hanyang Women’s University from where she got her Tourism degree.

Professionally, she is a singer, songwriter under RBW. Her singing career started when she debuted as a member and lead vocalist of the girl’s band, Mamamoo on June 18, 2014. Her other band members are Moonbyil, Wheein, and Hwasa. On April 24, 2018, she released her solo extended play titled, her Emotion under RBW. It included the song written by her, “, “Star Wind Flower Sun, and other ” previously released covers of several Korean pop songs.

She is widely popular for the remakes of songs like “Lived Like a Fool” (바보처럼 살았군요)”, “In My Dreams” (꿈에), and  “Autumn Letter” (가을 편지)”. Her remake “Lived Like a Fool” has ranked 43 in the KOR. Similarly, “In My Dreams” was chartered at position 72 in KOR. Her other chartered song in the Goan Music Chart is “Like Yesterday”. It secured 54 positions.

Apart from remakes, she has also done collaborations in various albums. She has collaborated with Eddy Kim, in the “Coffee & Tea” for the album “Dokkun Project Part .4”. Her other collaboration is with her band member, Wheein for the album, Memory. Likewise, she has coordinated with Luna and Hani in the song, “Honey Bee”.  “Charm of Life” and “A Song from the Past” are other albums where she shared her space with other singers like Heechul, Shindong, Eunhyuk, and Kassy.

Kim has been featured in the songs like “Love Again”, “Cloudy”, “Lie Ya”, and “Leopard”. She has been featured with another artist such as “Yang Da-il” for “Love Again”. For albums, “Cloudy” and “Nirvana II” Solargot featured with “Kiggen” for the former and “Ravi” for the latter. During these years, she appeared in very few songs. Her song “Star” with Kim Min-Jae chartered in the 68 positions in the Korean Goan Music Chart. Similarly, in the year, 2020, she appeared in “Blue Bird”, and her most recent appearance is in the song, “Adrenaline”.

There was a concert of herSolar  “Emotion Concert Blossom” ” in 2018. She did a convert at Ewha University in Seoul, South Korea from April 27-29. She made herself available from June 16-17 for the Concert held at Sohyang Theater Shinhan Card Hall in Busan, South Korea. She loves her fan unconditionally. “Solarsido “SoLive 3 Million Subscribers Special” 2021” was another fan meet event on April 24, 2021. 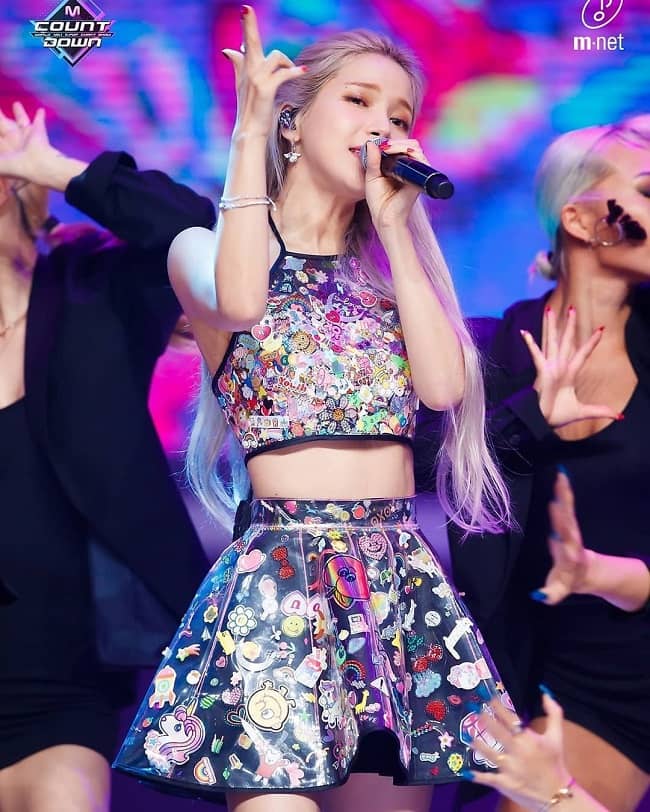 She is a multi-talented personality. She is also into acting since 2015. She played the role of “Jung Soo-in” in episodes 2 and 5 of the TV series, Imaginary Cat. Likewise, she has a cameo in the Entourage under the tvN network. Her other TV shows include the role of ‘Contestant ‘ in the “King of Mask Singer” and “Duet Song Festival”. Likewise, she appeared as herself in the “We  Got Married”, “Gamsung Camping, and “Boss in the Mirror”. Furthermore, she is a judge of the “The Sing We Loved, New Singer”.

She has also added a YouTuber to her profession after January 24, 2019. Her Youtube channel, 솔라시도 solarsido with more than 3.08M subscribers and 180M likes. Her channel is popular for vlogs, mukbang, dances, and songs. “Hello! her YouTube channel is now open!” is the first-ever video uploaded on February 16, 2019. It has garnered 1.1M views which is commendable. Some of the other popular videos on her channel with millions of views are “Yummy Dance Choreography”, “I was bored so I cut my hair ㅋㅋㅋㅋ”, and “After eating a lot of organic at JYP restaurant! What did Park Jin-young say?”.

She has hosted the ‘2016 Gaon Chart Music Awards’ with Leeteuk in 2017. The same year, she was the master of the ceremony of “KBS Gayo Daechukje” under the KBS network. Her other MCs were Mingyi, Yerin, and Kang Daniel. 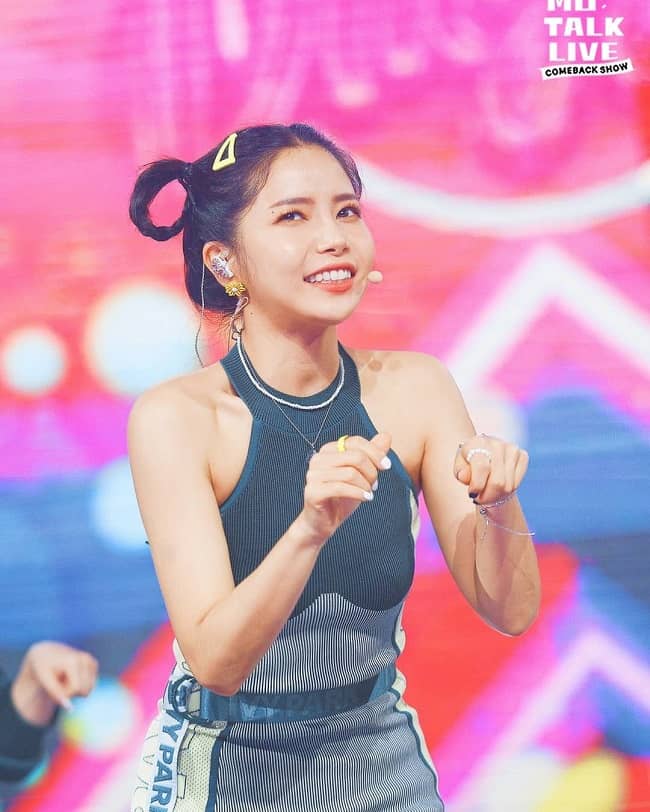 In the year 2016, she was nominated for the “16th MBC Entertainment Awards” under the category of “Female Rookie Award in Variety Show” and “Best Couple (alongside Eric Nam)”  for  “We Got Married”. However, she only bagged the “Best Couple ” award along with her co-actor Eric Nam.

Beautiful Kim is a successful singer, songwriter, and actress.  Solar is secretive about her earnings. She has not given many details about how much she makes via her singing and on-screen presence. However, it is sure that she is living a lavish life on her own. As of now, her net worth ranges from $1M-$5M. 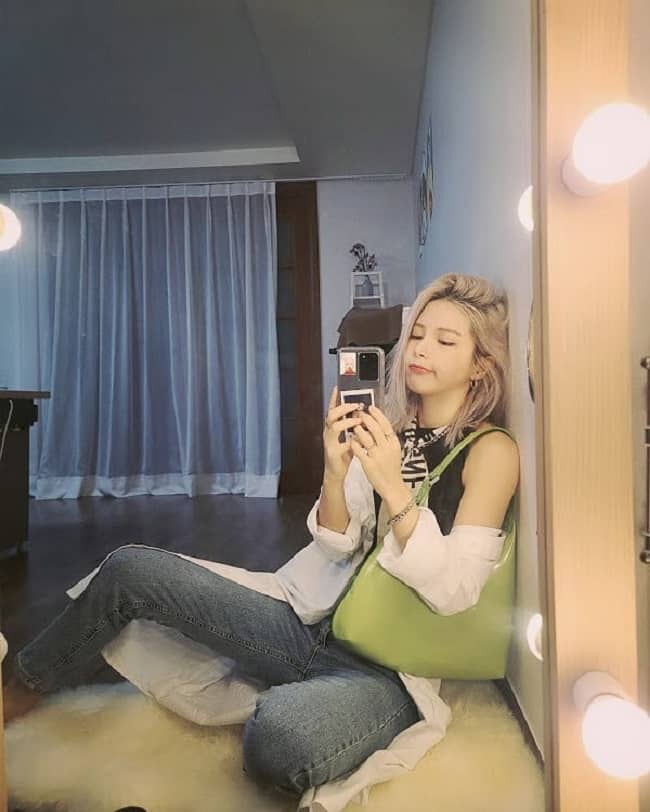 Solar’s sexual orientation is straight. There is no rumor of her dating anyone. She probably might be single as of now. She is more focused on her career than her love life. She has once mentioned that she likes South Korean hip-hop artist, Simon Dominic. However, there are no further details that are in the limelight until now regarding Simon and her.

Solar is extremely beautiful. She stands tall with a height of 5 feet and 4 inches and has a weight of 45 kg (99 lbs). Her other body measurements are recorded as 32-24-34 inches. Likewise, she has a slim build. She has a slim build. Kim has a fair complexion with dark brown eyes which makes her face more appealing. Likewise, her natural hair is of Black color but she often dyes it “Blonde”. Her other distinctive features are a lean physique, dimpled smile, pouty lips, and a beautiful spot under her right eyebrow.