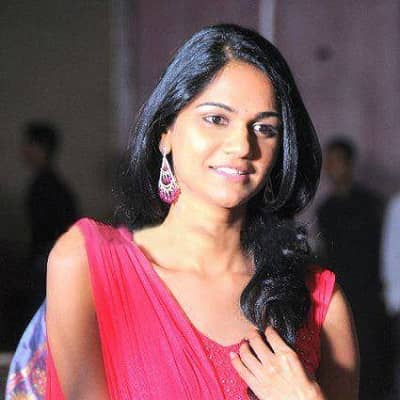 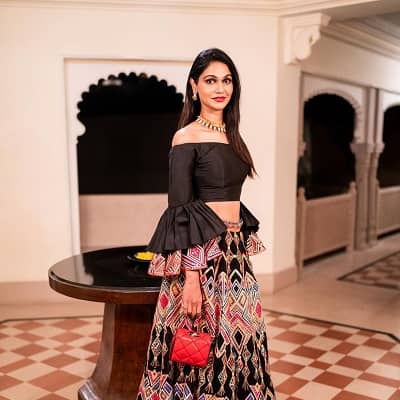 Sneha Reddy is the wife of the Indian actor, Allu Arjun. Also, Sneha Reddy is an Indian actress and model who primarily works in the Telugu film industry. She came into the limelight after her marriage to the most popular Indian actor, Allu Arjun. He primarily works in Telugu cinema and is also famous for his dancing skills. Moreover, he has achieved five Filmfare Awards South and three Nandi Awards.

The celebrity wife was born on 29, September 1985, in Hyderabad, India. She holds Indian nationality. Likewise, her zodiac sign is Libra and her age is 37 years as of 2022.

The name of her father is K.C. Shekhar Reddy, who is a business and visionary chairman of the SCIENT Institute of Technology (SIT) in Ibrahimpatnam in Hyderabad. There is no information about her mother. Also, she has a younger sister and her name is Nagu Reddy.

As for her educational background, she completed her schooling at Oakridge International School, Hyderabad.

After that, she went to the USA and received a master’s degree in Computer Science and completed a B.Tech in Electronics and Communication Engineering from Massachusetts Institute of Technology, Cambridge. Therefore, she is well-educated. 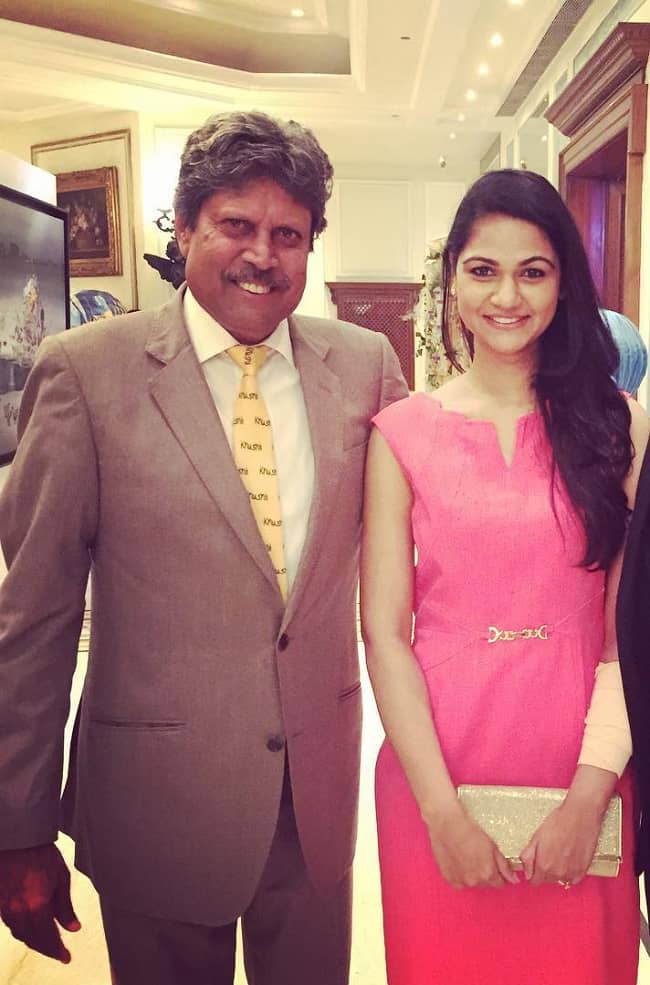 Sneha met Allu Arjun at their mutual friend’s wedding. It was love at the first sight for Arjun. Immediately after seeing her, Allu Arjun proposed which Sneha readily accepted.

Sneha Reddy’s and Allu Arjun’s wedding was on 6 March 2011 in a grand ceremony. The couple together has a son whose name is Allu Aryan and a daughter whose name is Arha.

Neither Sneha nor her husband, Allu Arjun has ever gotten into any rumors and scandals to the day. They have been maintaining a very honest and respectful nature. 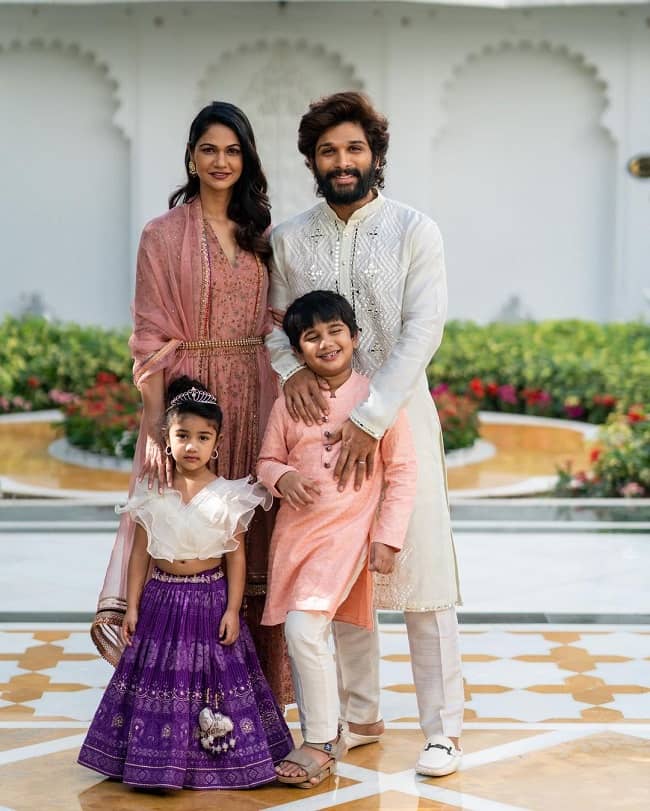 Coming to the social media part, Sneha Reddy seems to be quite active there. She often shares images of herself with her husband and kids. Looking at her posts, it seems like she loves her family and her career very much.

After finishing her studies, Sneha got back to Hyderabad to help her father at SIT. She worked as the director of the Academic and placement cell at the SIT. Sneha also aspired the developing talents and guided them to achieve their goals and dreams.

Furthermore, she also worked as the chief editor of the college’s magazine “SPECTRUM” which shows the opinions of the young generation. Apart from her career, she loves eating pizza and pain puri. Her favorite destinations are London and Mauritius.

Likewise, Sneha’s favorite colors are black and yellow. The celebrity wife’s hobbies are shopping, singing, traveling, and listening to music.

Now coming to Allu Arjun’s career, at first he acted as a child artist in “Vijetha” and as a dancer in “Daddy”. Allu showed his adult presence in “Gangotri”.

He then was present in Sukumar’s comedy “Arya”. This was his big achievement so far due to which he also got a 1st Filmfare Best Telugu Actor Award nomination.

Also, he was a Special Jury Award winner at the Nandi Awards ceremony and two CineMAA Awards winners for Best Actor and Best Actor Jury.

After that, Allu was in V. V. Vinayak’s “Bunny” acting as Bunny. Everyone was amazed and talked about his hard work, behavior, and dancing. Likewise, his next movie was A. Karunakaran’s musical love story “Happy”.

After showing his appearance as a guest in “Shankar Dada Zindabad”, he was seen in Sukumar’s psychological action movie “Arya 2”. He did the act of Arya.

Allu, moreover, was present in 2 more experimental movies in the year 2010. The 1st was Gunasekhar’s “Varudu” and another one was Krish’s “Vedam”.

Adding more, his next film was V. V. Vinayak’s action movie “Badrinath”. He did the role of Badri. The film finished a fifty-day run in 187 centers.

After Badrinath, Allu was present in the movie “Julayi”, an action-comedy that was out in 2012. Allu also did the role of Ravindra Narayan.

After all, these works, he was on the list of nominations for the SIIMA Award for Best Actor. Later he was featured in Puri Jagannadh’s action thriller “Iddarammayilatho”, acting as Sanju Reddy. In the year 2014, he was present in a cameo in Vamsi Paidipally’s “Yevadu”.

His other movie was Surender Reddy’s “Race Gurram”, where he did acting as a carefree guy. For this, he became the winner of his 3rd Filmfare Best Telugu Actor Award.

Furthermore, Allu created and also acted in a short movie “I Am That Change” in the year 2014, in order to extend the awareness of individual social responsibility. Additionally, Allu worked in Trivikram Srinivas’s “S/O Satyamurthy”, which was out on 9 April 2015.

Then, he was in “Sarainodu”, whose director was Boyapati Srinu. In the year 2016, he worked together with producer Dil Raju for the 3rd time for “Duvvada Jagannadham”.

The same year, his movie with the director, Sukumar, “Pushpa” was public. It was at the time of Diwali, however, it is delayed because of the COVID-19 pandemic.

Apart from the acting career, a rap song which was composed by S. Thaman, presented by Roll Rida, and Harika Narayan with lyrics by Roll Rida and The Hyderabad Nawabs, on Allu’s history in Telugu cinema. The music video’s title was “Allu Arjun Rap Song” which was out through the Aditya Music label. 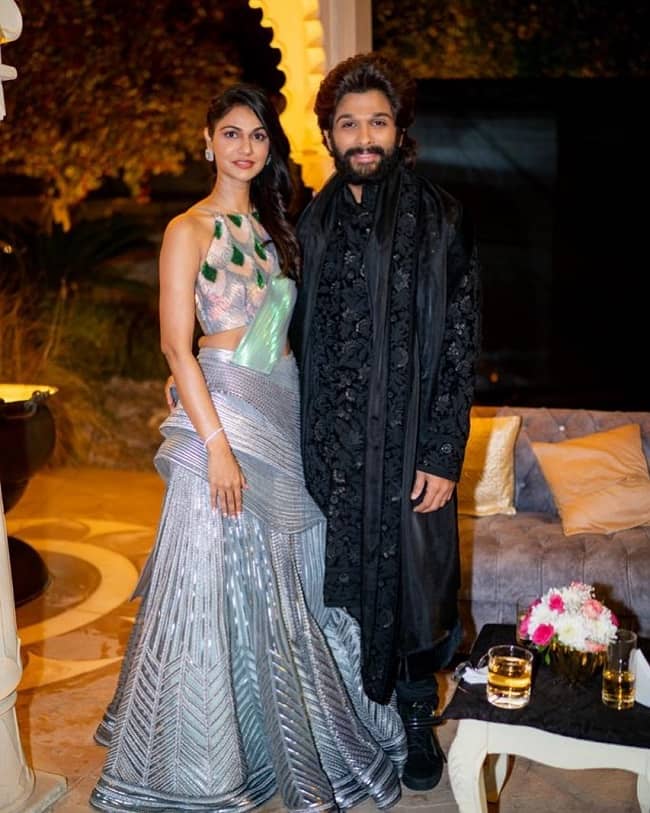 Caption: Sneha Reddy at an event with her husband (Source: Instagram)

The former actress, Sneha Reddy has a good net worth of around $5 million. She has been earning her net worth from her excellent career as an actress, and model, and also from helping her father’s business.

On the other hand, her husband, Allu Arjun also has a net worth of around $5 million. His new house is in Jubilee Hills, Hyderabad. It is one of the costliest places which is also under construction and he has also given a name, ‘Blessing’ for his house.

Adding more, his vanity van, Fell and is one of the most expensive vanity vans in the South. Moreover, he owns various expensive cars such as Jaguar ZJL, BMW X5, Audi A7, and black Ranger Rover, which is his recent purchase.

People also recognize him for the most expensive things he has. Also, it was reported that Allu Arjun was wearing a t-shirt worth Rs 65,000 and shoes worth Rs. 1.45 lakh.

Regarding the celebrity wife’s physical appearance, she is 5 feet 6 inches tall. Also, she has a weight of 57 kg. Similarly, she has black hair with a pair of black eyes.

Sneha also has a tattoo of his husband’s name on her hand. Other than this, there are no further details regarding her body measurements, dress size, bra size, and shoe size. However, the celebrity’s wife is a medium complexion, which is not fair and also not dark.