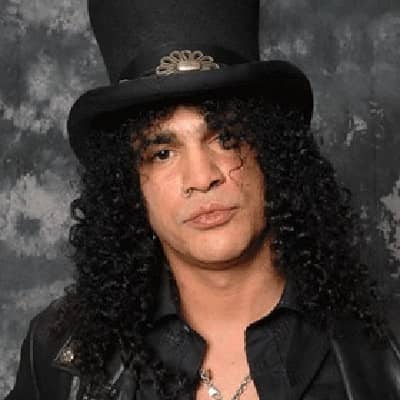 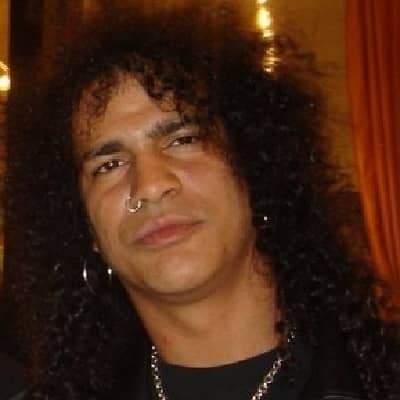 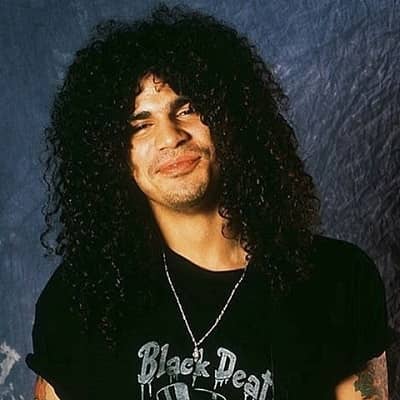 Slash is a British-American musician who is mostly known as the former lead guitarist of the hard rock band Guns N’ Roses. Slash was ranked 65th out of the top 100 Greatest Guitarists of all time by Rolling Stone in 2011.

Slash was born on the 23rd of July, 1965, in Hampstead, London, England. He will be 57 years old in the July of 2022. He was born to parents Anthony Hudson and Ola J. Hudson. Slash’s birth name is Saul Hudson. He is the eldest child. Saul also has a younger brother named Ash Hudson.

His father Anthony was an English musician who created album covers for musicians such as Neil Young and Joni Mitchell while his mother was a fashion designer and costumier. Slash is of mixed ethnicity. Seymour Cassel, an American actor, nicknamed him slash as he was in a hurry.

His parents separated when he was nine years old, and he moved home with his mother. He used to live with his grandmother when his mother went away for work. He sometimes followed his mother to work, where he met numerous movie and music stars.  Slash grew up in Los Angeles, California. 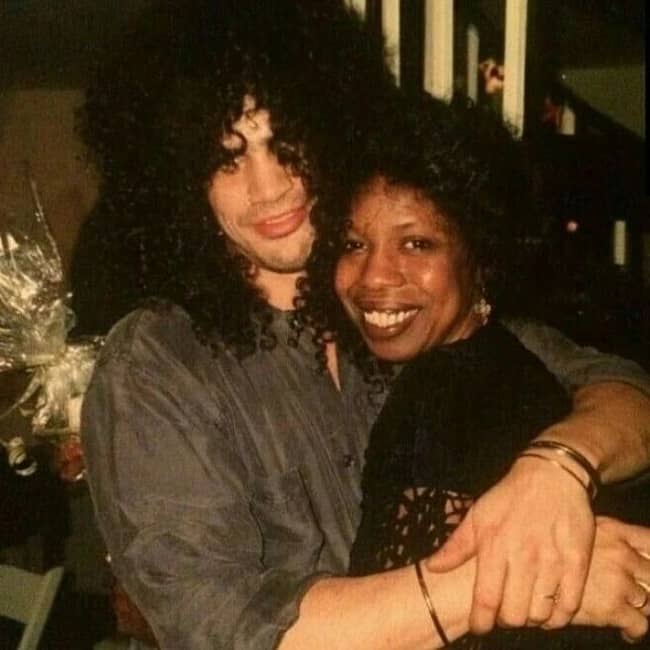 He attended Beverly Hills High School. Saul never got interested in studying but music always interested him. His mother Ola supported his decision.

He began taking guitar lessons from Fairfax High School teacher Robert Wolin. He used to spend more than 12 hours a day practicing the guitar. Slash also aspired to be a biker as well, but his love of music drew him to pursue a career in music.

Slash started his career in 1981 when he joined his first band, Tidus Sloan. However, he would form his band in 1983 with his childhood friend Steven Adler. The band disbanded a year later as they couldn’t find a singer.

He and Adler would later join Hollywood Rose, a local band that included singer Axl Rose and guitarist Izzy Stradlin. Following his time with Hollywood Rose, Slash joined Black Sheep and tried out unsuccessfully for Poison, a glam metal band that he subsequently openly mock later.

Axl Rose and Izzy Stradlin would ask him to join their new band Guns N’ Roses, along with Duff McKagan and Steven Adler in June 1985. The band would initially play at nightclubs and later open for bigger bands. They began recording their debut album near the end of 1986.

He quit the band in 1996 as he didn’t want to be part of Guns N’ Roses anymore. The reason behind the departure was the band’s unwillingness to collaborate and not seeing eye to eye in terms of band activity.

The band disbanded in 1996 after touring. Slash then formed the blues-rock cover band  Slash’s Blues Ball. He toured for 2 years with the band. He again regrouped the group in 1999 with  Rod Jackson on vocals, Ryan Roxie on rhythm guitar, Johnny Griparic on bass, and Matt Laug on drums. The band released their second album  Ain’t Life Grand in October 2000 through Koch Records. The band disbanded again in 2002.

In 2002, he founded the hard rock supergroup “Velvet Revolver” with old bandmates Duff McKagan and Matt Sorum, as well as Dave Kushner and Scott Weiland.

The group received tremendous fame and attention with the publication of their debut album, “Contraband,” which debuted at No. 1 on the US chart and sold two million copies. He left Velvet Revolver in 2008 after a fruitful run with the band.

Slash started the production of his solo album in September 2008. He released his debut solo album “Slash” in 2010. “Beautiful Dangerous,” “Back from Cali,” “Nothing to Say,” and “Starlight” were the album’s major hit singles. His first solo album was a commercial success, and it helped him relaunch his solo career.

He began working on his second album, “Apocalyptic Love,” shortly after, which was released in 2012 and debuted at #2 on the Canadian Albums Chart. In 2013, he also won the title of “Best Guitarist Of The Year 2012”. Slash released his third album, “World on Fire,” which included Myles Kennedy and The Conspirators on September 10, 2014. The album debuted at number ten on the Billboard 200 Chart.

On December 29, 2015, Billboard reported that Slash would rejoin the band to headline Coachella 2016, filling the lead guitarist spot vacated when DJ Ashba left the band. On April 1, 2016, he performed with Guns N’ Roses for the first time in 23 years at Troubadour during the band’s private warmup show.

The band subsequently embarked on the Not in This Lifetime… Tour, which was a huge hit, made more than $584 million by the time it ended in 2019. He then made his appearance on his first songs with the band since 1994, “Absurd” and “Hard Skool” in 2021.

Other Ventures and Philanthropy

Slash has performed with Jackson on stage multiple times, most notably at the 1995 MTV Video Music Awards when they performed “Black or White”. Slash played lead guitar on Michael Jackson’s 1991 hit “Give In to Me” off the album “Dangerous”.

He also collaborated on Lenny Kravitz’s song “Always on the Run”, the lead single from Kravitz’s album Mama Said. He sang the song “Kick It Up a Notch” for the Disney channel animation “Phineas and Ferb the Movie: Across the 2nd Dimension in 2011.

Besides music, he has also appeared in various films and television series, including “The Dead Pool,” “The Underground,” “Kid Notorious,” “Talking Dead,” and others. Saul is an honorary board member of Little Kids Rock and a board trustee of the Greater Los Angeles Zoo Association.

In 2007, Slash received the title “Riff Lord” at Metal Hammer’s fourth annual Golden Gods Awards. He was inducted into the Rock & Roll Hall of Fame in 2012 as a member of Guns N’ Roses’ iconic lineup. He also won a Radio Contraband Rock Radio Award in 2012. Slash received the Les Paul Award in January 2015. 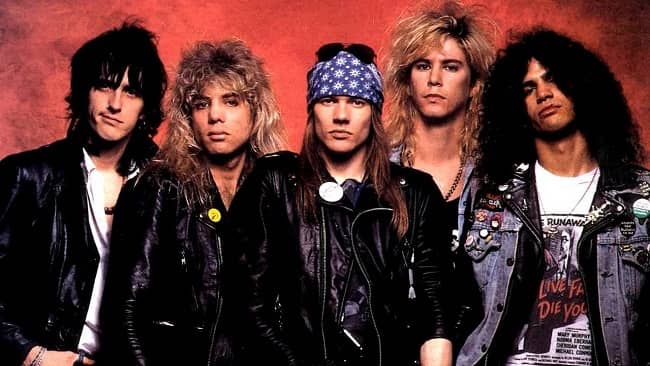 Slash is currently single. He has been married twice. He married his first wife Renee Suran on October 10, 1992, in California. Suran is an actress and model. The couple divorced after 5 years of marriage. They don’t share any children. He then married his second wife Perla Ferrar on October 15, 2001, in Hawaii.

They share two sons(London Emilio and Cash Anthony) together. Slash filed for divorce in August 2010 but they reconciled two months later. Perla and Slash finally divorced in 2014. Black also has dual citizenship in the United Kingdom and the United States. He has been living in Los Angles since 1971.

Slash was diagnosed with cardiomyopathy when he was 35, a form of congestive heart failure caused by his many years of alcohol and drug abuse in 2001. He was originally given between six days and six weeks to live but he managed to survive through physical therapy and the implantation of a defibrillator.

He has been sober and clean since 2005, for which he gives credit to his ex-wife Ferrar. He also quit smoking after his mother died from cancer. He is also an avid animal lover as he often featured snakes and reptiles in many of his music videos.

Slash said he reconciled with Axl Rose in an interview in 2015  as they had a bad relationship after slash’s departure from the band. His son London debuted his band Suspect208 in late 2020 as a drummer. 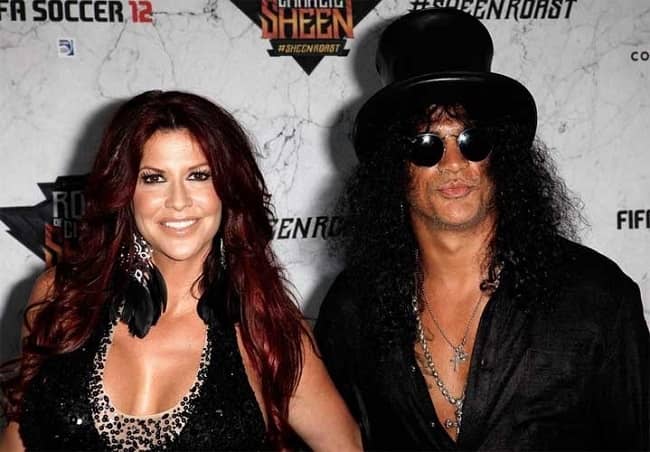 Slash has a height of 5 feet 8 inches and he weighs 75kg. He also has black hair and his eyes are black in color.

Slash earned his wealth through a successful career. Slash’s total net worth of 90 million.