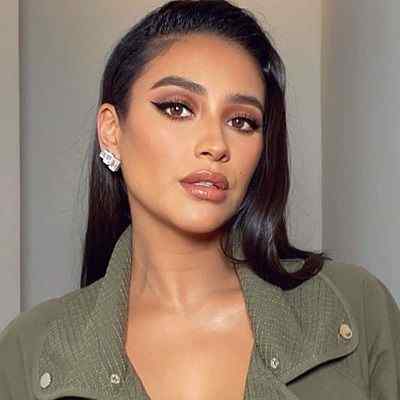 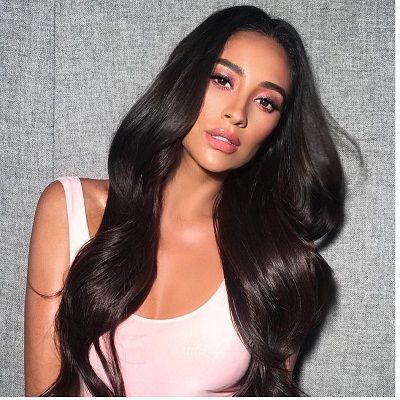 Shay Mitchell is an actress, model, as well as and author. Likewise, Shay Mitchell is also a celebrity ally for the LGBT community, who has worked with organizations working for their rights.

Shay Mitchell was born on 10 April 1987 in Mississauga, Ontario. Her birth name is Shannon Asley Garcia Mitchell and she is better known as Shay Mitchell and is 35 years old in 2021. She was born to parents Precious Garcia and Mark Mitchell. Her mother is Filipino and her father Scottish-Irish descent. Both of them work in finance. Similarly, she also has a younger brother named Sean. At the age of 10, their family moved to West Vancouver, British Columbia. Moreover, from an early age, Shay was interested in performing arts. She joined dance lessons at the young age of 5 and toured the city to participate and compete at various events along with her classmates. 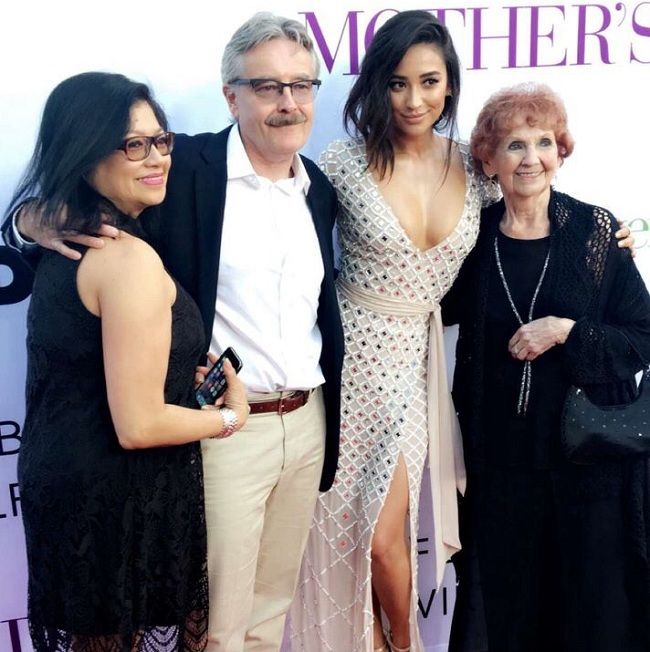 Caption: Shay Mitchell with family during the premiere of the “Mother’s Day” movie. Source: Stylevore

Mitchell attended Rockridge Secondary School located in West Vancouver where she grew up. Likewise, she graduated from West Vancouver Secondary School. Mitchell gained her nickname “Shay” during school. She was a big fan of Jennifer Lopez, often called J.Lo. Hence, her friends began calling her Shay Lo and even today she is internationally known as Shay Mitchell rather than her full name.

Shay Mitchell started her career modeling for various companies. She modeled for companies in cities like Hong Kong, Bangkok, and Barcelona. She later joined an acting school in Toronto and signed with her first theatrical agency. Similarly, Mitchell appeared in the Canadian teen drama series Degrassi: The Next Generation in 2009. Since then,

Mitchell has appeared in a total of 11 TV series and shows including Pretty Little Liars, Project Runway, Rookie Blue, and Glee among others. Likewise, she has appeared in 6 movies including Dreamland, Mother’s Day, and The Possession of Hannah Grace among others. She has also appeared in music videos for the songs “Hold My Hand”, “Under You”, and “Help Me Help You”. Moreover, she has been serving as a brand ambassador for the brand Biore for a couple of years.

Additionally, Shay Mitchell is also an author. She co-authored a young adult novel with Michaela Blaney in 2015. The title of the book is Bliss. Moreover, she also started a production company with manager David Dean Portelli. The name of the company is Amore & Vita Inc. Furthermore, the company has already signed a contract with Warner Bros. Television Group.

In August 2017, she made an appearance on the former Lifetime television series You, in the role of socialite Peach Salinger. The series was released in September 2018. In September 2017, she starred in the lead role in the ABC television pilot, The Heiresses.

Likewise, she alongside the manager David Dean Portelli started a production company Amore & Vita Inc. and has already signed a contract with Warner Bros in 2017. Television Group. In 2018 she started her travel brand BÉIS.

Achievements, and Net Worth

Shay Mitchell has been nominated for several awards since 2011. Some nominations include “Ship of The Year” and “Choice TV Actress” in 2015, “Favorite  Cable TV Actress” in 2016, and “Choice Web Star: Fashion/Beauty” in 2018. Shay Mitchell got nominated mostly for her role in Pretty Little Liars. She also bagged the Cast to Watch award at the “Young Hollywood Awards” in 2011 for the same TV series. She shared the awards with her fellow cast Troian Bellisario, Lucy Hale, and Ashley Benson.

Furthermore, Shay Mitchell’s estimated net worth is $6 million, according to Celebrity Net Worth 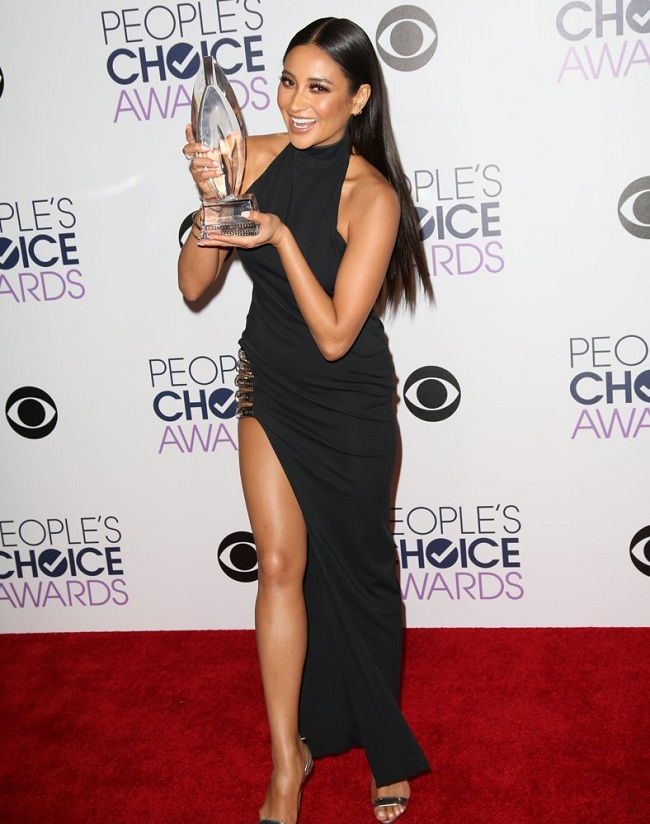 Until its closure in 2014, Mitchell supported Somaly Mam Foundation, which fought sex trafficking. Likewise, she also worked with The Trevor Project alongside her Pretty Little Liars casts. Moreover, she is a supportive celebrity ally for the LGBT population. She has worked with campaigns and organizations working for LGBT rights like the NOH8 Campaign and GLAAD.

Currently, Shay Mitchell is in a relationship with Matte Babel. The couple recently gave birth to a baby girl on 20 October 2019. Mitchell announced the arrival of her baby with a photo of her holding the baby’s hand. However, they have not revealed the baby’s name to the public yet. Before this, she had a miscarriage in 2018, which she revealed through her Instagram account.

Similarly, she is a very strong mother who is handling her baby alongside her daughter during her work as well. She is so blessed to have a baby girl in her life and keeps on posting cute pictures on her Instagram handles. 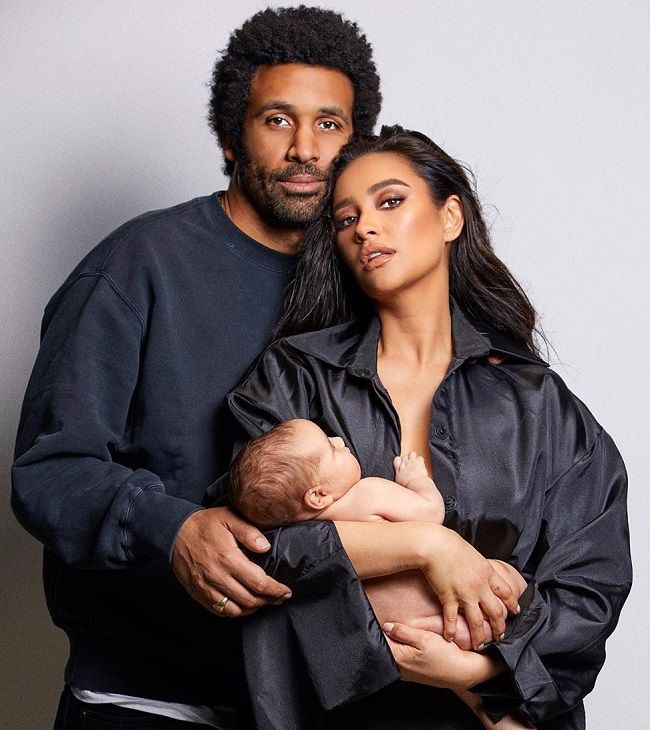 Moreover, people have also accused Mitchell of facial correction through surgery. However, this accusation may or may not be true as Mitchell has not ever confirmed it.

Shay Mitchell has a slim body. She stands a height of 5’7” tall and weighs approximately 57 kgs. However, due to her recent pregnancy and childbirth, her body weight might have changed from her average weight. Likewise, she has a chest-waist-hip measurement of 37-25-34 inches. Moreover, she has dark brown eyes and natural hair of the same color. However, she frequently experiments with her hair color. Pink, blonde, silver, and purple are some hair colors she has experimented with.

Shay Mitchell is quite active on social media platforms. She has 4.06 million subscribers on her YouTube channel. She is also the host of her YouTube Lifestyle channel. Similarly, she has 29.1 million followers on Instagram and 3.35 million on Twitter. She shares her beauty tips, her projects, and often about her family and personal life on these social media accounts. Moreover, she has gained over 5 million likes on her official Facebook page.