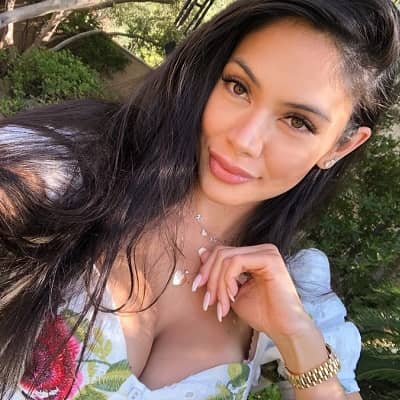 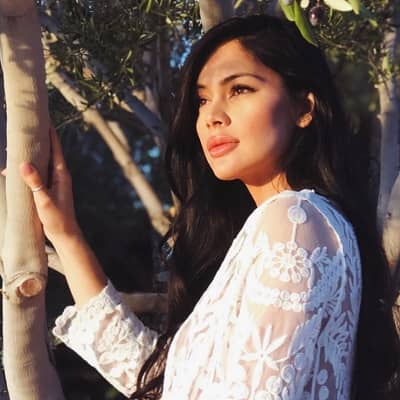 Shaunyl Benson is an Actress, Singer, Songwriter, and an Instagram Personality. Shaunyl Benson is more popular as the life partner of the magician, illusionist, and musician, Criss Angel. Sharyl’s husband rose to fame after his work was shown on TV and on the stage of the show “Criss Angel Mindfreak”.

The actress was born on 29th July 1991, in her birthplace, Queensland, Australia. Shaunyl holds American nationality and belongs to the Irish-Filipino ethnicity. Similarly, her age is 31 years old as of 2022 and her sun sign is Leo.

Benson also follows the Christian religion just like her spouse does. Moreover, her mother was of Filipino ethnicity whereas her father was of Irish ethnicity.

Her mother was a graphic designer who also motivated her to pursue the arts, guiding her to take singing lessons as well from a very young age. Also, she has a sister, Jackie Benson with whom she grew up with.

Regarding her educational background, she went to Friends’ Central School and also graduated with a Bachelor’s degree. 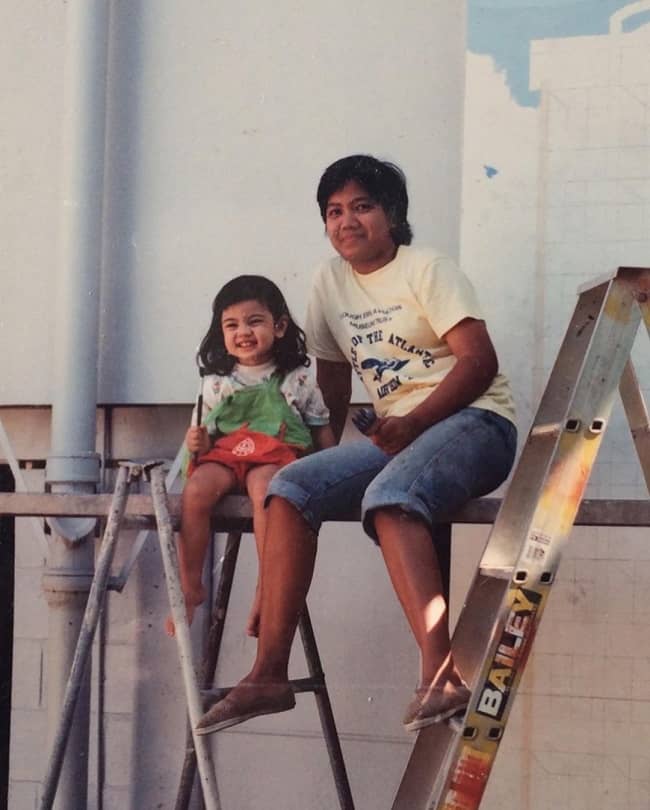 Caption: Shaunyl Benson with her mother when she was very young (Source: Instagram)

In the year 2012, Shaunyl Benson began her relationship with her long-term boyfriend, Criss Angel (Christopher Nicholas Sarantakos). Then, the couple’s wedding was in the year 2015 which was a private ceremony.

Together she and Chriss have two kids and both of them are sons. First, the couple gave birth to their first kid, Johnny Christopher Sarantakos in the year 2014. However, the couple decided to get separated and divorce each other. Happily, the couple again got together in the year 2018.

Then, she gave birth to their other kid in the year 2019 whose name is Xristos Yanni Sarantakos. Sadly, their elder kid, Johnny had to suffer from acute lymphoblastic leukemia when he was a baby.

Then, Johny’s 3 years of chemotherapy for cancer treatment were completed, and was announced cancer-free in January 2019. Again, Criss Angel revealed that his son’s cancer has returned in an interview.

Before meeting her, Angel got married to JoAnn Winkhart in the year 2002. However, the pair recorded a file for divorce after 4 years.

However, JoAnn was not attributed as his wife but was credited as “Criss’s Girl”. Then, Angel started dating Holly Madison in November 2008 who is also the ex-girlfriend of Hugh Hefner.

Sadly, the relationship again came to an end in February 2009. Then, on 7th September 2011, Criss proposed to Sandra Gonzalez in Cabo San Lucas at the time of a sunset dinner. However, they also broke up after a short time. 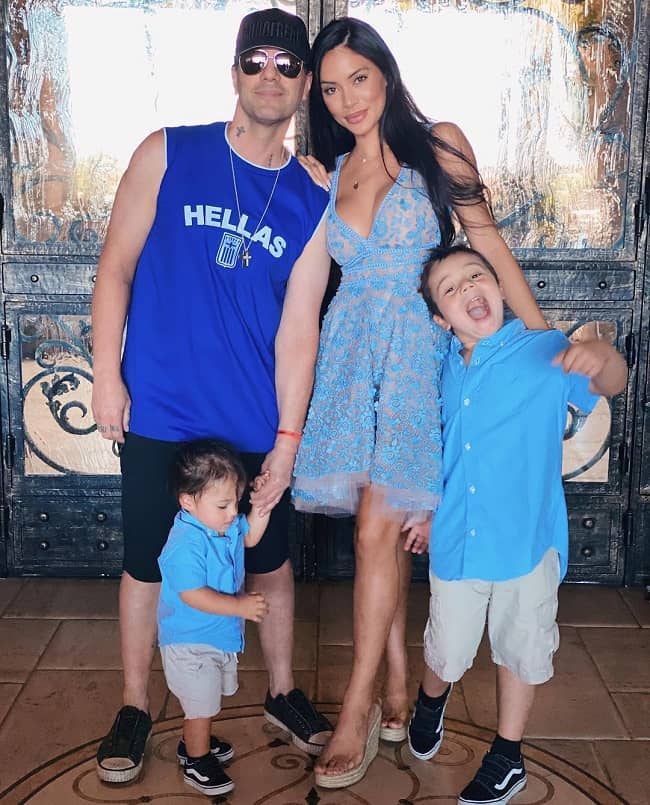 Regarding Shaunyl Benson’s physical appearance, she is a fitness freak and loves doing exercises and staying fit. She has a good height of 5 feet 7 inches or 170 cm or 1.7 m.

Also, the actress has a body weight of 56 kg or 123 lbs with a very slim and curvy body type which makes her even more attractive. The body measurements of the actress are 34-25-36 inches and her bra size of 6 (UK).

In addition, she has a pair of mesmerizing hazel eyes with black long hair and a sexy figure. Also, Benson has a fair complexion with a very refined and beautiful face.

After graduating, Shaunyl went on to pursue work in the entertainment industry. She started writing some songs adding “Never” which was also presented in one of Criss Angel’s TV shows.

The actress has also done some acting projects, starting with “Jane” which was out in the year 2017. “Jane” is a biographical movie related to the story of anthropologist Jane Goodall and was out at the time of the Toronto International Film Festival.

The next year, she served on “Desert Rose”, as one of the main characters in the movie. Which he also worked with Curtis Walker as her love interest in the film.

When she was still working on various projects, her popularity went higher for which her romance with magician Criss Angel has the main hand. Moreover, in her free time, she loves to read, travel, take images, see movies, and do artwork as well.

Criss Angel started developing a strong passion for magic tricks from a very young age. At the age of twelve, he was already doing several shows. At that time, his biggest inspiration was the story of Harry Houdini.

Criss even went on to train with the reality TV personality, Marc Morrone. As for education, Criss went to the East Meadow High School. After completing his studies he went on to pursue his career instead of joining a college.

Then. Criss also began traveling and performing together with other acts on the road, while he was also gaining some knowledge in the craft. Criss Angel did not want to be a typical magician.

In the year 1994, Criss made his 1st TV appearance being present in “Secrets”. Eventually, Clive Barker turned into one of his untimely supporters. The magician has also worked with musician Klayton to create music along with a magic show.

They then appeared in several shows like “The Science of Magic” and its sequel.

Criss Angel has also performed magic together with people on the streets in his leisure time. His fame was raised outstandingly after he presented an act where he was tied and submerged underwater for twenty-four hours.

He went through sixteen oxygen tanks at the time of the performance. Then he stationed the world record for human to be entirely submerged underwater for the longest time. Criss speedily became the star after his act, going to a TV show. 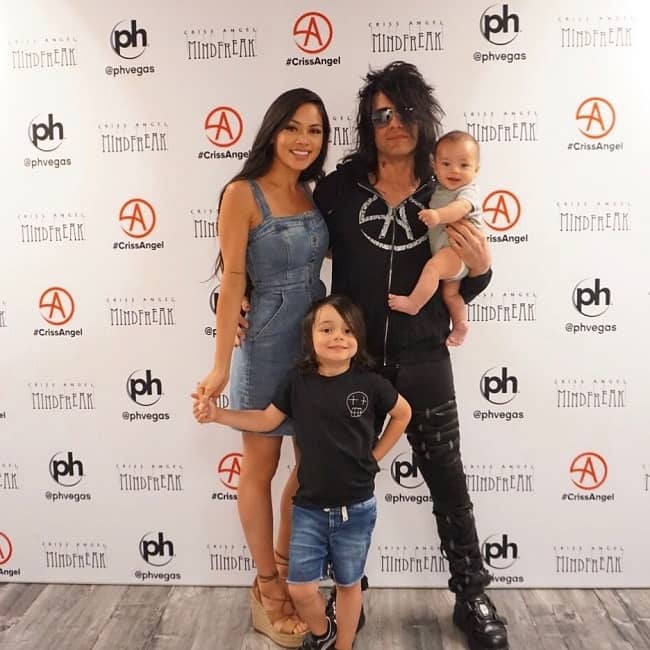 Caption: Shaunyl Benson with her family at an event (Source: Instagram)

The beautiful actress is active on the social media platform as she is also on Instagram, she has an Instagram account “@shaunylbenson” where she has gained 62.8k followers. Also, she has her own YouTube channel where she has a limited number of content.

There Shaun has less than 607 subscribers as of now. Other than this, Shaun is not active on other social media platforms such as Twitter and Facebook. Moreover, her Instagram feed is full of her traveling images with her husband and her sons.

She has a net worth of $1 million as of 2022 which she has been earning from her works and collaborations with different companies and brands in the entertainment industry.

On the other hand, her husband, Criss Angel has a stunning net worth of $70 million. Angel’s primary source of income is from his career as a musician, magician, and illusionist.