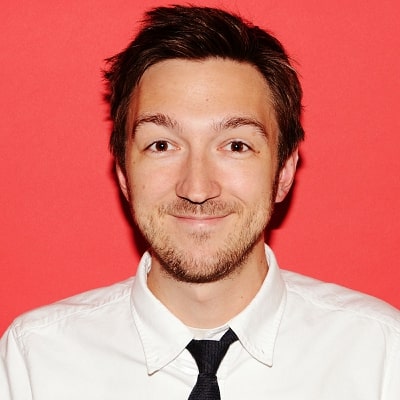 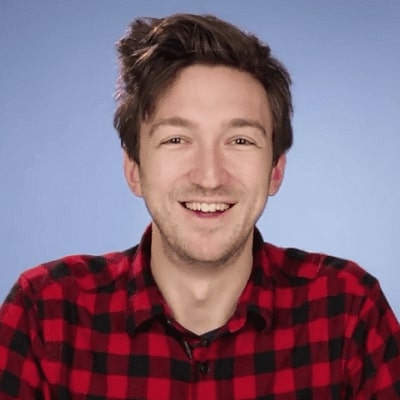 Shane Madej is an American Youtube star. Shane Madej is mostly popular as a BuzzFeed writer and video producer. He has worked with people like Jen Ruggirello, Steven Lim, and Ryan Bergara among many others.

Shane Madej was born on 16 May 1986 and his age is 35 years old at present. His birthplace is Schaumburg, Illinois but has lived in Los Angeles, California. Moreover, his full birth name is Shane Alexander Madej. Talking about his family, his parents are his father Mark Madej, and mother Sherry Madej. He also has a brother named Scott Madej.

When he was a child, he had a pet parrot named Paco, which unfortunately passed away in winter. However, the ground was too cold, and thus his family had to keep the bird in the freezer until the ground thawed and they could bury him in the garden. 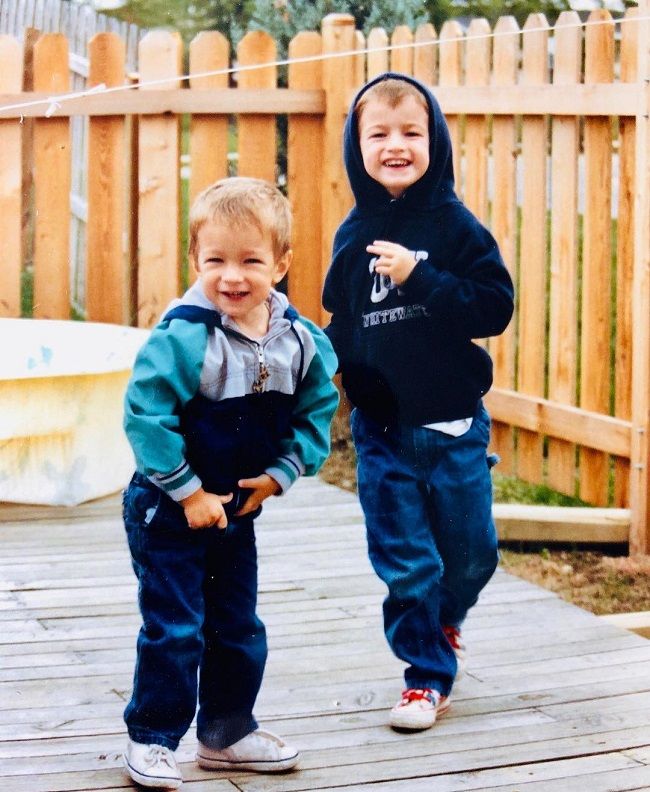 Caption: Shane Madej and his brother Scott during their childhood. Source: Instagram

Moreover, growing up, he suffered nightmares of a “big, angry, black dog that would always sorta be standing there, growling, and it would jump at him, and it would bite his face.” While playing with the other children in his neighborhood, one of his neighbors had a “rotten husky” that had gotten loose and started chasing him throughout the neighborhood. These events infused a distrust of dogs in Shane.

Additionally, he also mentioned that he was in the Boy Scouts. At around nine years old, he was going to attend church with a friend, but as soon as he crossed the threshold, he got a bad nosebleed, and the church staff ran out of tissues.

Also, he attended Schaumburg High School and he was also voted Mr. Saxon 2003. Similarly, he performed a German version of the Saxon Spirit song. He also took German classes throughout all four years of high school. Additionally, when he moved into his first apartment in Los Angeles, someone defecated on his doorstep.

Professionally, Shane Madej is a Youtuber. More precisely, he is a BuzzFeed writer and video producer. He has produced hit videos like We Let Some Dogs Watch TV And They Were Positively Riveted and What Your Birthday Says About You. Likewise, he also runs the YouTube channel BuzzFeed Unsolved with Ryan Bergara.

Additionally, he also created Extreme Science! with Rent Harrison. He played Professor Morris Ashley and posted it on his YouTube channel. He then created Marshmallow World with Matt Staffa and Christy Gurga as well. He posted his first video on the Buzzfeed channel in December 2014 and its title is Unusual Facts About Diet Coke.

He is also one of the remarkable producers behind the BuzzFeed series It’s Personal. He has worked with several fellow BuzzFeed producers, which also includes Jen Ruggirello. Besides Buzzfeed, he also worked at the Woodfield Mall in Schaumburg, Illinois.

He remarked in an interview that after graduating from film school, he spent a few years working at a company that produced corporate videos. Then he moved on to do a few years in public access, which fleshed out his skill set as a one-man production crew. He also worked at Starbucks and briefly as a Video Producer for the Al Larson Prairie Center for the Arts in Schaumburg, Illinois.

He was also a part of the Test Friends series as his venture into unscripted work at BuzzFeed. Additionally, he is an actor and writer, popular for Puppet History (2020), S.W.A.T. (2017), and BuzzFeed Unsolved: Supernatural (2016). 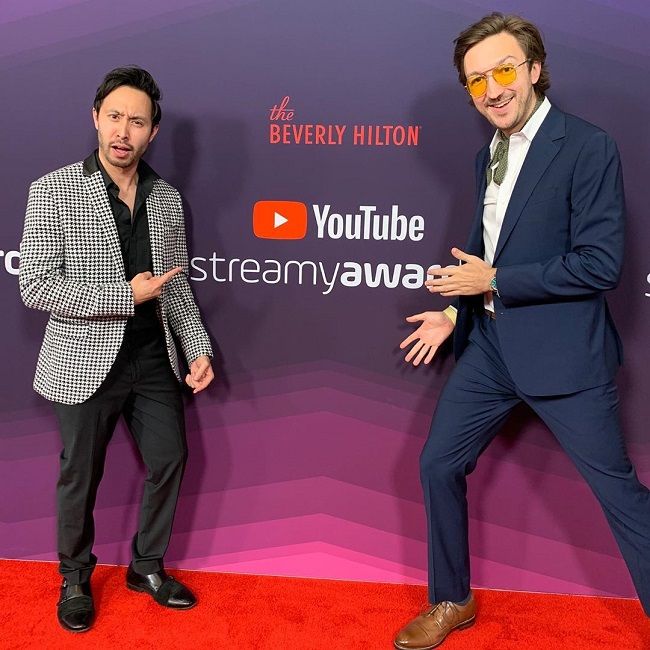 He began his Youtube career with the video Unusual Facts About Diet Coke. It was posted in December 2014 on BuzzFeed’s YouTube channel. This particular video earned more than 800 thousand views. He then continued working as a producer and an editor. His remarkable work includes videos like They were Positivity Riveted and Dogs Watching TV.

The group’s first video was Guys Try Ladies Underwear for the First Time, after which they continued uploading their next videos one after the other. Overall, the videos of the series have garnered billions of views. Their most popular video is Guys Try Labor Pain Simulation. This particular video has earned over 30 million views.

As a producer, he is popular for BuzzFeed Unsolved: Supernatural. It is the second part of BuzzFeed Unsolved, an American documentary series on YouTube. This show is a huge success, making it one of BuzzFeed’s most-watched shows. The success of the show has also led to a spin-off, which is dedicated to sports.

He was also a producer for Ruining History. Some of his other projects include Worth It, and BuzzFeed Unsolved: 3 Horrifying Cases of Ghosts and Demons.

Moving on, he has a net worth estimation of around $1 million as of 2022. He earns through his involvement in various Youtube channels as a creator, actor, writer, and producer.

Shane Madej is in a romantic relationship with fellow BuzzFeed producer Sara Rubin. There is information that they began dating since 2018, however, they have known each other for a long time. Sara appeared on jis Instagram for the first time in August 2015 and has been on his feed more frequently in recent times. He shares adorable photos of his lover on his social media. 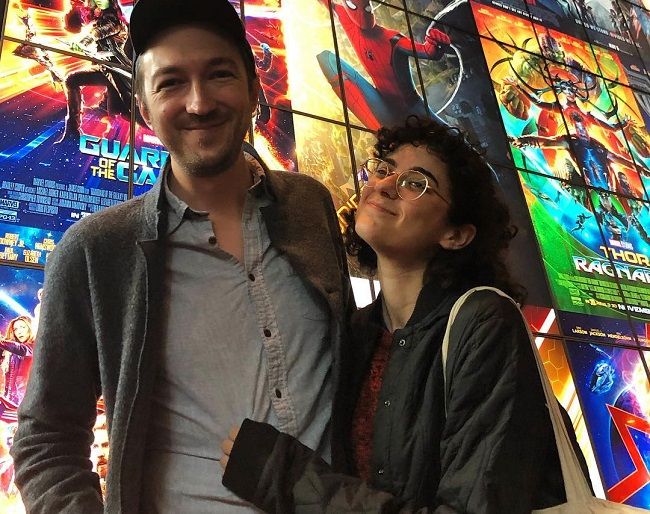 Shane stands tall at a height of 6 feet 4 inches and weighs around 60 kgs. However, there is no information regarding his other body measurement details like his chest-waist-hip measurements, biceps, dress size, shoe size, etc. Likewise, he has dark brown eyes and hair of the same color.

Talking about Shane’s social media visibility, he has an Instagram handle “@shanemade” that boasts 759 post shares and 889k followers at the time of preparing this biography. Similarly, he also joined Twitter in June 2008 and so far has over 501k followers.