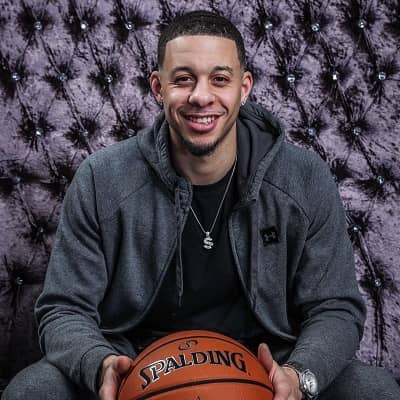 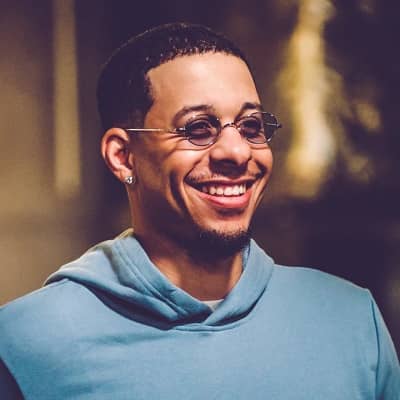 Seth Curry is an American professional basketball player, best known for playing in the ‘National Basketball Association’ (NBA). Seth Curry was a member of Duke University’s basketball team from 2010 to 2012.

His full name is Seth Adham Curry. He was born on August 23rd, 1990, in Charlotte, North Carolina, USA. He is currently 30 years old and his zodiac sign is Virgo. His mother’s name is Sonya Curry and his father’s name is Wardell Stephen ‘Dell’ Curry.

His father is a former ‘NBA’ player, while his older brother Stephen Curry plays for the ‘Golden State Warriors’ of the ‘NBA’. Similarly, his younger sister Sydel Curry played volleyball at ‘Elon University’ in North Carolina. And, his mother, played college volleyball at ‘Virginia Tech’. 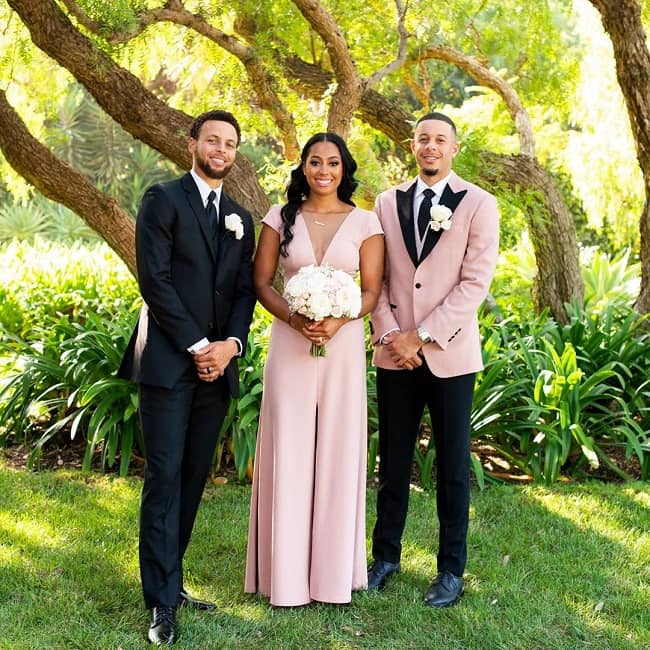 More about his early life

He grew up watching his father play and train with his team which helped him study the nuances of the game at a very young age. He attended ‘Charlotte Christian School’ in Charlotte, North Carolina.

He was part of his school basketball team and served as its starter for three years. Moreover, he was on the academic honor roll of ‘Charlotte Christian School’ for four years before graduating in the year 2008. 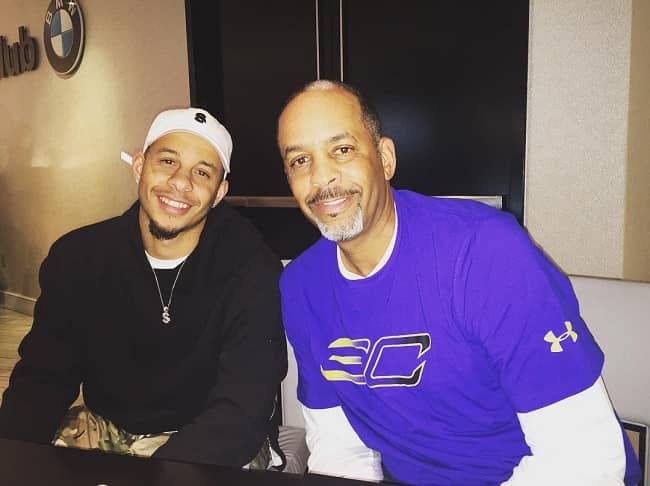 Seth’s basketball career started from his school days. In his senior year at school, he averaged an impressive 22.3 points, 5.0 assists, and 5.0 rebounds. By the end of the season, he had earned all-state, all-conference, and first-team ‘SAA All-American’ honors. He helped his team amass several victories, which resulted in ‘Charlotte Christian’ making a state final appearance in 2006.

After passing out of high school in 2008, he attended the ‘Liberty University’ in Lynchburg, Virginia, USA. In his freshman year at the university, he averaged 20.2 points per game which were the best average among all freshmen nationally. He also broke the ‘Big South Conference’ scoring record for a freshman in a single season.

Curry was named the new starter when Kyrie Irving suffered a toe injury, which forced him to take a break. Seth became the top scorer by scoring 17 points in a game against ‘The Miami RedHawks’ which represents the ‘Miami University.’ On February 9, 2011, he became the highest scorer of the season with 22 points against the ‘North Carolina Tar Heels,’ which represented the ‘University of North Carolina at Chapel Hill’.

After ending his university career on a high, he appeared in the 2013 ‘NBA’ draft. However, he was not drafted by any team. On August 23, 2013, he signed a non-guaranteed contract with the San Francisco Bay Area-based team, ‘The Golden State Warriors.’ After appearing in six preseason games for the team, he was waived off on October 25, 2013.

Similarly, on November 1, 2013, he was acquired as an affiliate player by the ‘NBA Development League’ team, ‘The Santa Cruz Warriors.’ During his debut game for the team on November 22, he scored 36 points and made six assists and three rebounds.

Moreover, on December 24, 2013, he was acquired by ‘The Memphis Grizzlies.’ He made his ‘NBA’ debut on January 5, 2014, but was waived by the ‘Grizzlies’ soon after his debut. Subsequently, he was re-acquired by ‘The Santa Cruz Warriors’. 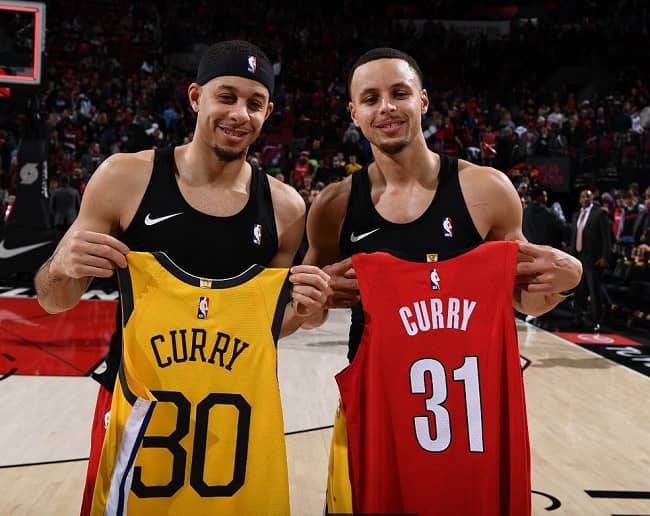 On February 3, 2014, he was named to the ‘Futures All-Star’ roster for the ‘NBA D-League All-Star Game’ in 2014. On March 21, he signed a 10-day contract with the Cleveland-based ‘NBA’ team ‘The Cleveland Cavaliers.’ On March 22, he scored three points in nine minutes during his appearance for the ‘Cavaliers’ in their match against ‘The Houston Rockets’.

Thereafter, he was acquired by ‘The Phoenix Suns’ for the ‘Las Vegas Summer League’. On September 29, he was signed by ‘The Orlando Magic’ for the subsequent season. On October 7, 2014, his rights for the ‘NBA D-League’ were acquired by the ‘Erie BayHawks,’ an affiliate team of ‘Orlando Magic’.

At the end of October 2014, he was waived by ‘Orlando Magic,’ allowing ‘Erie BayHawks’ to acquire him officially. After the acquisition, he became part of the ‘D-League’ training camp.

In his debut match for the ‘BayHawks’ on November 24, he scored 23 points and helped his team win against ‘The Idaho Stampede’. On February 4, 2015, he was named to the ‘Futures All-Star’ team for the second time in his career. 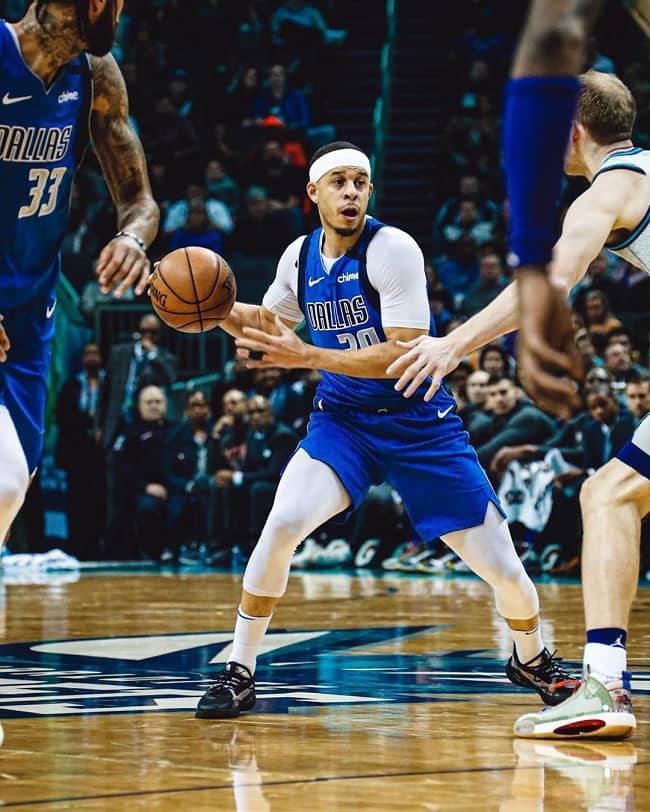 Moreover, he averaged 24.3 points per game in the league and earned a place in the ‘All-NBA Summer League’ first team. On July 22, 2015, he signed a $2 million contract with ‘The Sacramento Kings’. Playing for the ‘Kings,’ he scored his career-best 21 points against ‘The Portland Trail Blazers’.

During the 2017-18 season, he suffered an injury to his left tibia and was ruled out for the entire season. On July 6, 2018, he was signed by ‘The Portland Trail Blazers’ as part of a two-year contract.

Reflecting on his personal life, he got engaged to Doc Rivers‘ daughter ‘Callie Rivers’ in February 2019. In May 2018, they were blessed with a daughter named Carter. Both Seth and Callie are active on social media platforms, where they post pictures depicting their personal lives. Finally, on September 14, 2019, the couple got married. Callie is the former professional volleyball player. 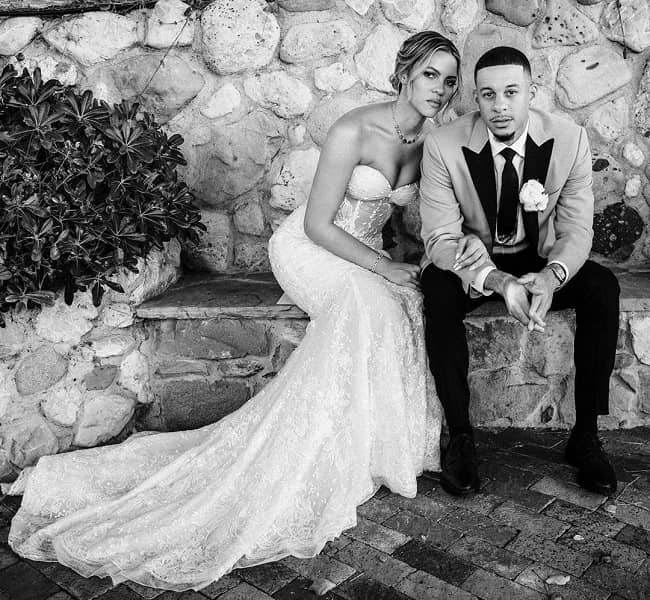 Caption: Seth Curry and his wife clicking a photo on their wedding day. Source: Instagram

Seth stands the height of 6 feet 2 inches tall and weighs around 84 kilos. However, he has an athletic body built. There is no other information regarding his body measurements. Further, he has curly black hair and a pair of dark brown eyes. 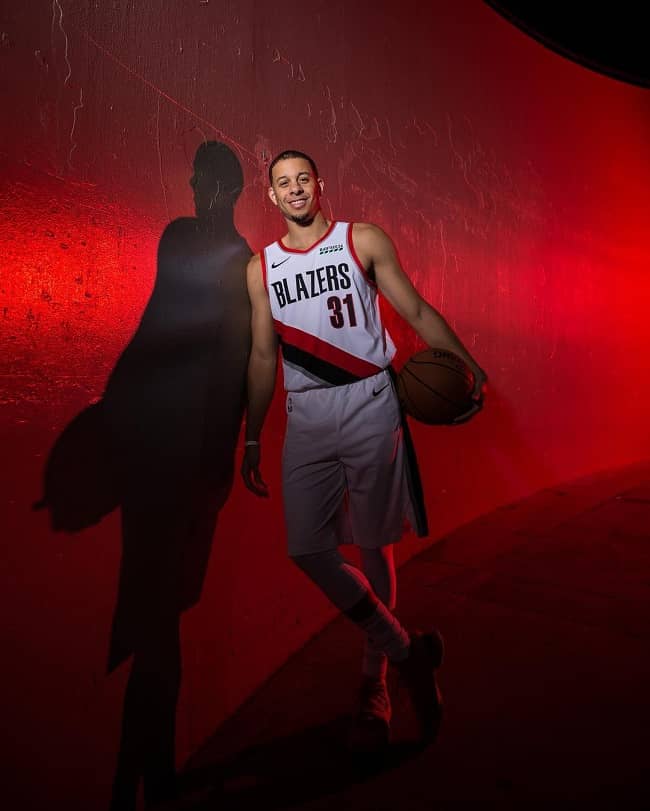 Caption: Seth Curry posing for a photo in his photoshoot day. Source: Instagram