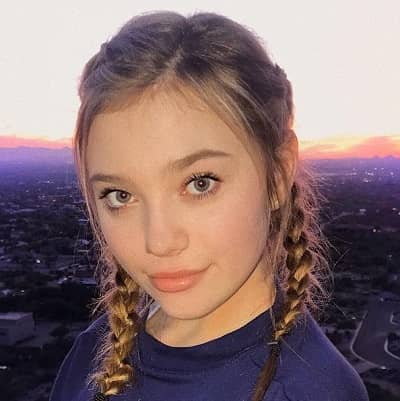 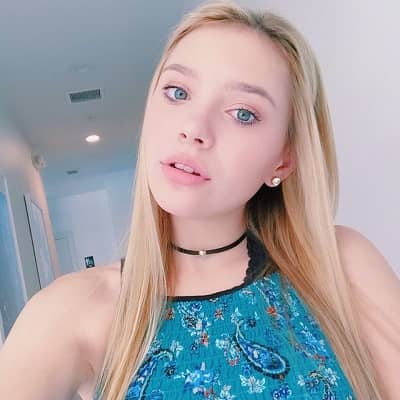 Sasha Morga is an American beauty, fashion, and lifestyle blogger. Sasha Morga has a self-titled channel where she has earned over 1.46 million subscribers.

Sasha Morga is 19 years old. She was born on August 12, 2002, in the United States of America and her zodiac sign is Leo. There is not much information about her parents as she has tried to keep her personal and professional life separate. Similarly, she started playing the violin at the age of nine. 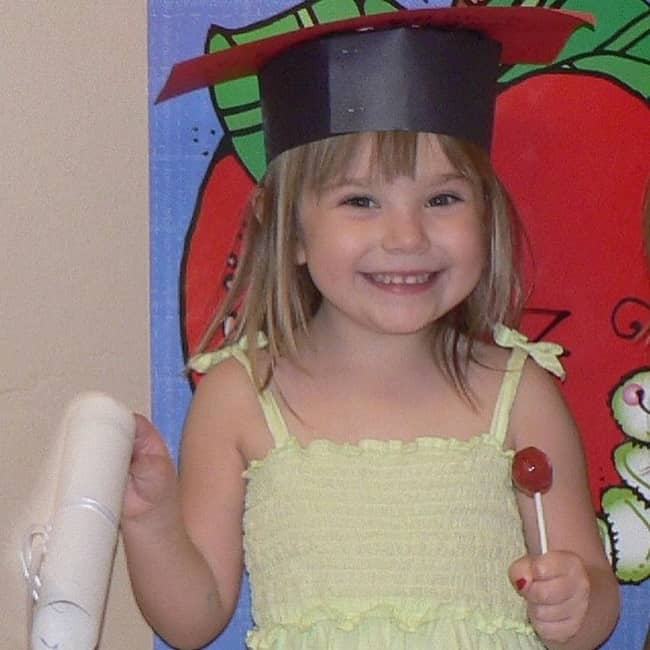 Caption: Sasha Morga on her childhood photo with the graduation cap (Source: Instagram)

She has a brother named Roman Morga and has appeared in many of her videos like made appearances in the video “Powdered Donut Challenge.” Similarly, she has stated in her video titled ‘The Sibling Challenge’ that her parents adopted her brother, Roman, from Russia when he was 2 years old.

She enjoys eating pasta, penne noodles with Alfredo sauce, and soft pretzels. Similarly, she wants to visit BoraBora. Moving toward her educational background, she is a high school graduate and even posted her graduation day picture on May 12, 2020. She holds American nationality.

Professionally, Sasha Morga is a rising young social media personality and YouTube star. Similarly, she is famous for her life hacks, makeup, DIY, beauty, and lifestyle-related videos uploaded on her self-titled Youtube channel.

She launched her self-titled YouTube channel on September 6, 2012. She didn’t post her first video until a few weeks after her 10th birthday. However, she uploaded it in September 2013. She has also shared videos like ‘Winter Essentials 2015’ and ‘Summer Inspiration Outfits, Essentials &Treats’ where she shares some healthy recipes and season-appropriate outfits.

Some of her most viral life hacks and tips videos are ‘10 Summer Life Hacks’ ‘10 Weird Life Hacks Everyone Should Know’, and ‘School Life Hacks-How to Ace Your Finals’. In her ‘Workout Motivations’ life hacks, she provides recipes for healthy popsicles and infused water as well as ways to remain motivated for exercise.

In one of her videos titled ‘Valentine’s Day Inspiration-Décor, Outfits, and Hairstyle’, she showcases her Valentine’s Day decoration, recipes, and dress. She has also uploaded healthy breakfast recipes using oats and gluten-free pancakes with agave syrup and blueberries in one of her videos. On February 25, 2016, she live-streamed a video with YouTuber Eva Gutowski titled ‘High School-You vs. Child You, Part2’.

Similarly, she has also collaborated with her brother, Roman, and friend, Meagan, and has uploaded some Challenge videos titled ‘Blindfolded Makeup Challenge ft. Meagan’ ‘The Sibling Challenge’, and ‘The Ultimate Sibling Challenge’. Likewise, she has some ‘Haul’ videos where she reveals her apparel and shoe shopping while supporting her favorite brands like JC Pennys, Hollister, TJ Max, Marshalls, American Eagle Outfitters, and Macy’s.

She has also uploaded a series of her morning and night routines at the request of her Twitter fans. Similarly, she has shared entertaining videos with her mother as well, like ‘Gummy Vs Real Food Challenge’ and ‘Tasting Pumpkin Spice Food’. Moreover, she is famous for her makeup videos where she live-streams her makeup routines while promoting some brands like Advanced Mineral, Urban 3 Naked, Real Technique, and Bobby Brown. Her video ‘Pranks to pull at the End of The School Year’ received 0.7million likes.

In the D.I.Y (do it yourself) videos like ‘Holiday Home Room Décor’ and ‘Quick and Easy Fall Hairstyles’, she shows creative ways of Christmas decorations and seasonal hairstyling at home all by herself. She showcases her room décor in her room tour video series and asks her fans to help her with redecorating ideas. She even states the brand name of the lifestyle stores she bought her room accessories. 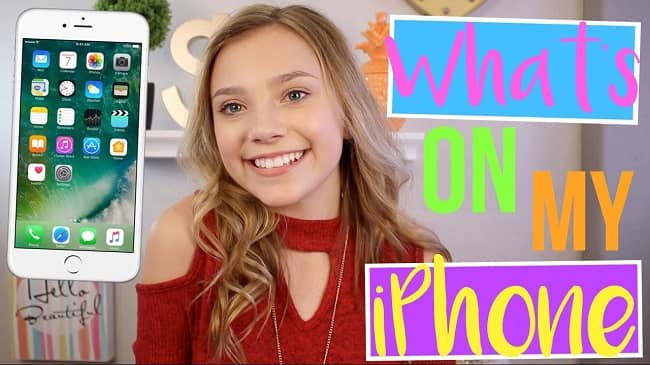 Further, she has been sponsored by Outfit 7 and DreamWorks Animations. In her videos, she has advertised the Outfit 7 game “My Talking Hank’. As of now, her YouTube channel has garnered more than 1.46 million. One of her most viewed videos on her channel is “Awesome Room Tour with Loft! 2016!.” Uploaded on July 3, 2016, with almost 37,798,323 views.

Some of the other notable videos are “Awesome Room Tour with Loft!,” “Gummy vs Real Food Challenge! ft. Mom | Sasha Morga,”  and ”
2017 House Tour! | Sasha Morga.” Most of her videos garnered more than millions of views.

Moreover, she also has her vlog titled ‘SashaMorgaVlogs’ which is her second YouTube channel.  In her vlogging channel, she mostly posts her vacation trips, fun times with friends, and behind-the-scenes videos. Her popular vlogs are ‘I MOVED!! Moving Vlog! | Sasha Morga,’ ‘Sasha Takes On Paris’ ‘My Trip to Mexico with Ashyln’.

Her first vlog was ‘Stealing Fruit?’ with her friend, Ellie. Further, she also uploads challenges and prank videos on YouTube. Currently, the channel has garnered more than 88.1K subscribers.

Sasha Morga is a young and talented YouTuber personality. She has grown good fame as well as fortune through her social media presence and mainly from her YouTube channel. Through YouTube, she has made earnings of around 75k dollars. Thus her estimated net worth is around 140k dollars as of August 2020. Additionally, she also earns through several brand endorsements and promotions.

Sasha Morga is probably single. Looking throughout her social media profiles she has not mentioned any photo with her guy friend as her love. However, she might also be keeping it private and away from social media fame. Moreover. she often keeps on posting pictures with her friends. Besides that, her charm and beautiful appearance have attracted lots of people to her.

Moreover, she has not been through any kind of negative rumors or controversy within the seven years of her appearance on YouTube. This young and talented YouTuber has maintained a clean image profile.

This American YouTuber and beauty, fashion, and lifestyle vlogger Sasha Morga stands at a height of 5 feet 5 inches tall and weighs around 53 kg. She has a pair of beautiful blue eyes.  Originally, she has blonde hair but often keeps on coloring with different hair dyes. 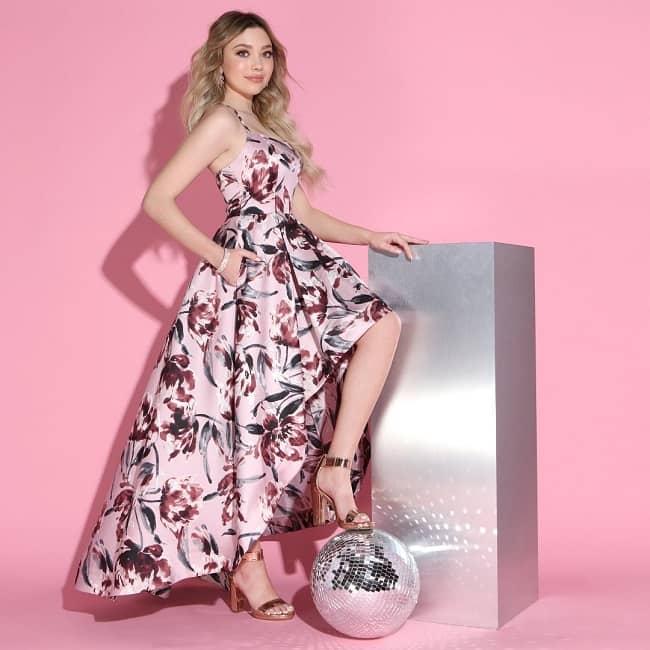 Caption: Sasha Morga posing for a photo in her beautiful gown (Source: Instagram)