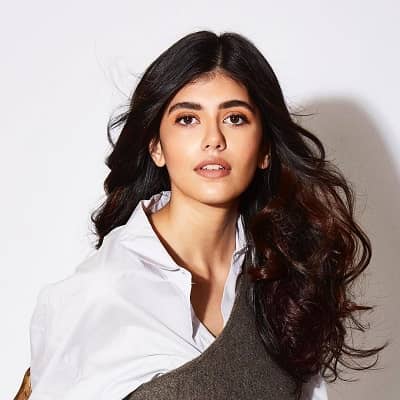 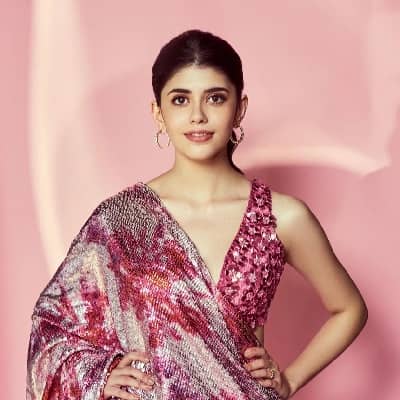 Sanjana Sanghi is an Indian actress and model who works in Bollywood movies. Sanjana Sanghi gained more fame after her recent presence in the movie “Dil Bechara” where she was starring as a lead character alongside Sushant Singh Rajput.

The Indian actress was born on September 2, 1996, in Delhi, India. She is Indian by nationality and Asian by ethnicity. Similarly, her age is 25 years old and her zodiac sign is Virgo. Sanghi was born into a Hindu family so it is obvious that she follows the Hindu religion. Also, she is a nonvegetarian. Her father is Sandeep Sanghi who is an entrepreneur and her mother is Shagun Sanghi who is a housewife. Additionally, Sanjana has an elder brother who works at Google. His name is Sumer Sanghi.

Regarding her educational background, Sanjana Sanghi went to Modern School from Lady Shri Ram College For Women, New Delhi. During her school days, she was also very active in various curricular activities. Sanjana was a very brilliant student and she even received an appreciation letter from the then HRD minister, Smriti Irani. It is given to her because of her excellent performance on XII boards. Furthermore, she has also achieved a gold medal from the University of Delhi. 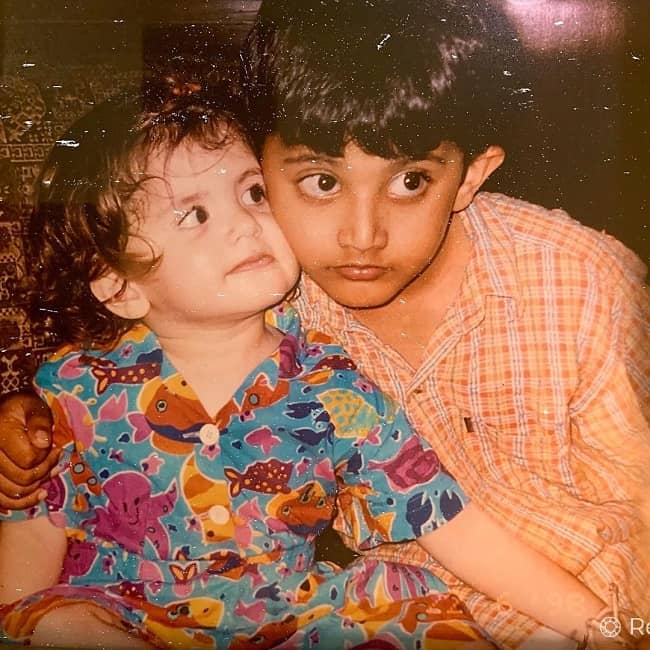 Caption: Sanjana Sanghi with her elder brother when they were kids (Source: Instagram)

The Bollywood actress is raising her fame slowly. Her net worth must be around $1 million. And her primary income source is from her profession as a Bollywood actress and model. She must have earned some money from her previous works and from the advertisement acts, and also from brand deals and sponsors. Also, there are no details about the cars and houses she owns. But it is obvious that she is living a great and luxurious life.

Sanghi began her acting career by first appearing in Imtiaz Ali’s romantic drama movie “Rockstar” in 2011. She acted as a child artist in this movie. She was hired by Mukesh Chhabra after he recognized her performance on stage at her school. After that, she was present in the movies like “Fukrey Returns” and “Hindi Medium” in the year 2017. In the year 2018, she was selected to act as the lead character in the movie “Dil Bechara”. For the movie, she collaborated with the talented actor, Sushant Singh Rajput in the transformation of The Fault in Our Stars. Moreover, Sanghi was also present in some of the advertisement videos for companies such as Tanishq, Cadbury, Aircel, Coca-Cola, Myntra, and Dabur.

Next time, she will be appearing in Kapil Verma’s action drama “Om: The Battle Within”. In the following drama, she will be acting as Aditya Roy Kapur’s love interest. The talented actress was also present in the Guru Randhawa music video “Mehendi Wale Haath”. The song’s director was Arvindr Khaira. Currently, the actress is also into modeling for various companies. She can also see her in various magazines and newspapers as well. Sanjan Saghi has been doing very well in the entertainment industry. Her hard work and positivity have been paying off for her. The actress has been involved in public speaking and has represented her motherland, India at numerous international conferences. In addition, Sanjana has also won a couple of awards.

Before she entered the entertainment industry, she had a profession as a feature writer at ‘Youth Ki Awaaz’, which is situated in New Delhi. In addition, Sanjana was a summer trainee at “Ogilvy”, Gurgaon, a research trainee at “RIS”, in New Delhi, a political analysis and public policy trainee at “HT Mint”, and a marketing strategy trainee at “Viacom18 Studios”. Also, Sanjana Sanghi was also a learner with BBC and a senior coordinator of Placement Cell, LSR. Apart from her acting and modeling career, the actress also loves many other things like partying, studying, listening to music, and traveling. Her favorite foods are Croissant, fish, and chocolate by Hotel Chocolat whereas her favorite restaurant is EI Techo of California.

The actors she likes to watch the most are Naseeruddin Shah and Ranbir Kapoor. As she loves studying so, some of her favorite books are The Palace of Illusions by Chitra Banerjee Divakaruni, Becoming by Michelle Obama, and 21 Lessons for the 21st Century by Yuval Noah Harari. Similarly, her favorite film is The Fault In Our Stars (2014), her favorite tennis player is Roger Federer and her favorite musician is Anderson East. Moreover, she loves to travel in London and her favorite pop bands are Imagine Dragons and OneRepublic. Also, her favorite color is indigo. The beautiful actress seems to be single for now. She has not revealed any information regarding her past as well as her present relationships and affairs. Therefore, the actress is enjoying her singlehood as of now. At the time of her shoot for the film “Dil Bechara, there were some rumors that her co-star, Sushant Singh Rajput, was sexually harassing her. However, the actress disagreed with all those fake rumors by saying: “On returning from a long trip to the US yesterday, I read several baseless and unfounded stories with respect to misconduct and misbehavior on the sets of our film Kizie Aur Manny. I’d like to clarify that no such incident took place with me. Let’s put an end to these conjectures.

Regarding Sanjana Sanghi’s physical appearance, she has a good height of 5 feet 6 and a half inches. She has a body weight of 49 kg. Moreover, she has a pair of brown eyes with beautiful black hair. The actress is a health freak. She regularly does yoga and is also a trained Kathak and Jazz dancer. Also, she loves Kurtis to wear. She has a slim body type with a very pretty face. Therefore, Sanjana is physically and mentally very fit and is working harder for her career and for her country India. Further details regarding her body measurements, dress size, and shoe size.

Now talking about her presence on the social media platform, the actress is quite active there. She has an Instagram account with 2.1 million followers and a Twitter account with 77.4 K followers. However, she is not active on Facebook. Moreover, every account is verified. Sanjana’s social media accounts are full of her hard works related images and videos. Also, we can see her other works apart from the entertainment industry. The actress also loves to interact with her followers and fans.