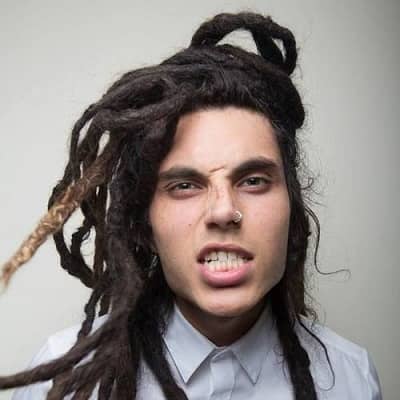 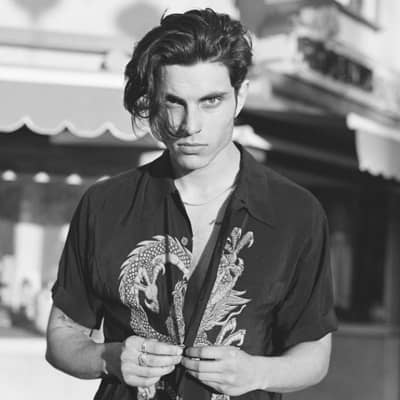 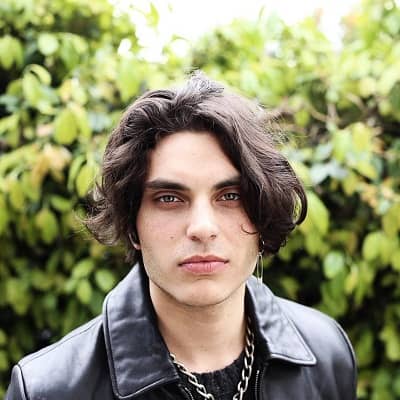 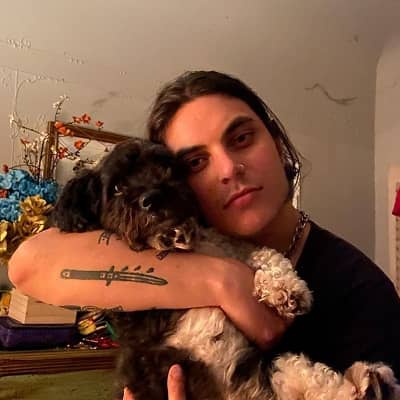 Samuel Larsen is a young American multi-talented personality. Samuel Larsen is an actor, singer, musician, and model. He is popular for his role as Zed Evans in the films “After” and “After We Collided”. He also worked on several more films and TV shows among which “Glee” is also one of them.

Samuel Larsen was born on August 28, 1991, and he is currently 29 years old. He hails from San Francisco, California, U.S. Likewise, his full name is Samuel Peter Acosta Larsen. Talking about his family, his parents are father Henrik and mother Lupe Acosta Larsen.

His ethnicity is Danish-Mexican as his father is from Denmark and his mother from Mexico. Furthermore, Larsen has two siblings; an older brother named Manolo Acosta, and a sister named Morgan.

As a young boy, Larsen played drums, bass, guitar, and keyboards. Regarding his educational journey, he graduated from Murrieta Valley High School in the year 2009. Then in his sophomore year, he became vocalist and guitarist of the school band called “15 North”. This band performed at various festivals. 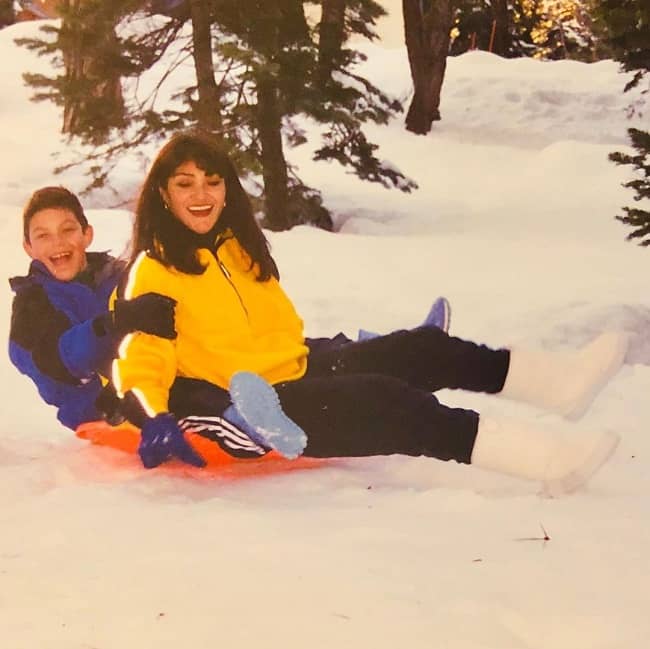 Caption: Samuel Larsen and his mother captured while playing in the snow in a childhood photograph. Source: Instagram

Professionally, Samuel Larson is a multi-talented personality. He is an actor, singer, model, and musician. On 21 August 2011, Larsen won the reality competition program The Glee Project. This program airs on the Oxygen network. Following this victory, he had a recurring role as Joe Hart on the Fox television show Glee.

Moreover, Larsen was also a member of the band “Bridges I Burn”. He is now pursuing his solo career. He released his debut EP titled Vices on 27 October 2014.

Larsen auditioned for the 9th season of American Idol in the year 2010. However, he didn’t make it to the semi-finals. He was eliminated after making it to Hollywood.

After doing some runway modeling for fashion designer Ashton Michael, Larsen met his soon-to-be bandmate Skip Arnold during a runway show. He then moved to Los Angeles busking and applied to The Glee Project.

Meanwhile, Larsen and Skip Arnold formed the band “Bridges I Burn”. Soon after that, the third member joined them. The third member was Salvatore Spinelli. Larsen writes and performs most of his music. He also spent some time touring with the rock band Palaye Royale. It was back in the year 2017-2018. 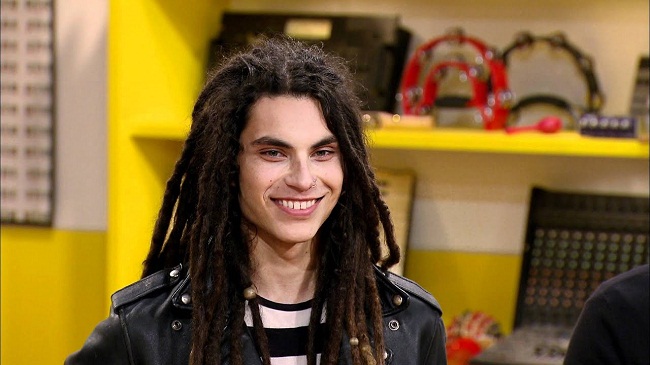 His first appearance on Glee was on the thirteenth episode of the third season, titled “Heart”. He played the role of Joe Hart, a formerly home-schooled Christian. During that episode, Larsen performed in two songs. Those songs were Gym Class Heroes’ “Stereo Hearts” and a mashup of The Association’s “Cherish” and Madonna’s “Cherish”.

Even though his winning prize for The Glee Project was seven episodes, Larsen appeared in each of the final ten episodes of Glee’s third season.

Additionally, Larsen also appeared as a mentor for The Glee Project‘s second season. He also appeared in 12 episodes in Glee‘s fourth season and appeared twice in the final season.

Then in July 2018, Larsen was cast as Zed Evans. It was in the film adaptation of the novel After. After is writer Anna Todd’s bestselling novel. The film was released on 12 April 2019. Later in 2020, Larsen retrieved the of Zed Evans in its sequel After We Collided.

Moreover, Larsen also guest-starred as Alfie Tucker in the 2015 show Hawaii Five-0. It was in the show’s Season 6, episode 9 titled “Hana Keaka” “Charade. 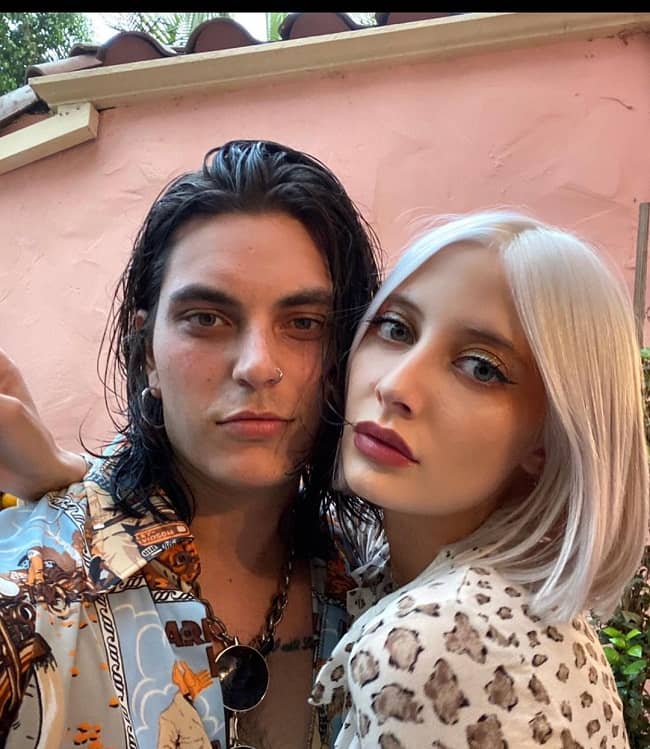 Caption: Samuel Larsen posing for a photo with his lover. Source: Instagram

Samuel Larsen has been in a romantic relationship with Vanessa Dubasso (@imvanessadubasso). It is unclear when they started dating but the first Instagram post featuring Vanessa on his account dates back to Valentine’s day 2019. Since then, the young actor has been sharing numerous posts featuring his lover. The same is the case with Vanessa’s Instagram account. She has also featured her lover in numerous posts on her personal Instagram account.

Samuel Larsen stands tall at an approximate height of 1.83 meters of 6 feet. Likewise, his weight is around 155lbs or 70kgs. Other than that, there is no additional information regarding his other body measurement details including his biceps, dress size, shoe size, chest-waist-hip measures, etc. Moreover, the handsome actor/singer has hazel eyes and dark brown hair. He is also popular for his dreadlocked hair that he once sported before chopping it off. 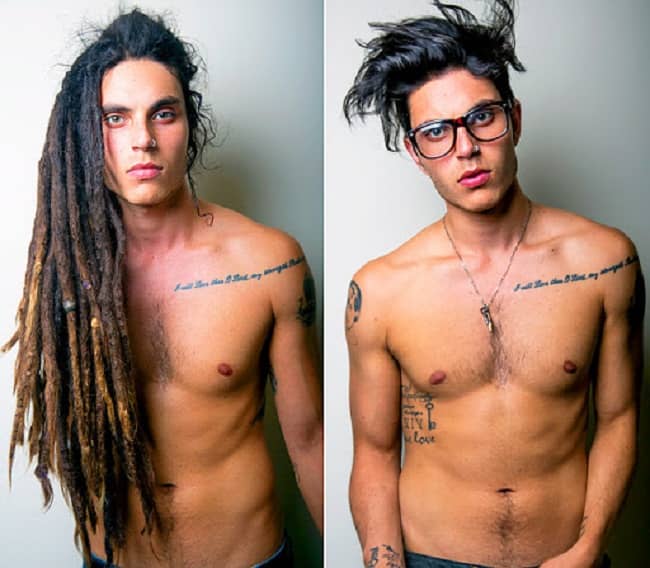 Caption: Samuel Larsen posing for a photo before and after chopping off his dreadlocks. Source: Favim

Talking about his social media presence, Samuel Larsen is available on Instagram under the username @samuellarsen. He has shared 720 posts and earned more than 316k followers in this account. He is also available on Twitter under the username @samuellarsen. The actor joined Twitter in March 2009 and so far has over 249.6K followers as of November 2020.

Larsen also has a personal Youtube channel called “Samuel Larsen”. He created this channel on June 23, 2007. So far, this channel has earned over 625.5k views and 36.6K subscribers. He mostly shares his music creation on his Youtube channel. Moving on, Larsen has a net worth estimation of approximately $3 million as of early 2020.