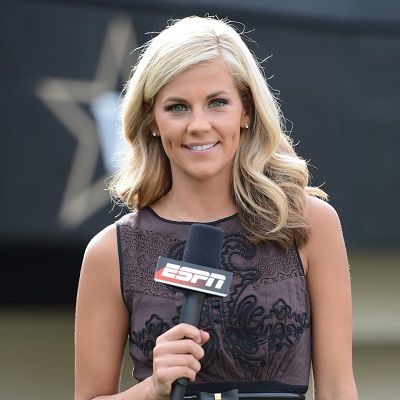 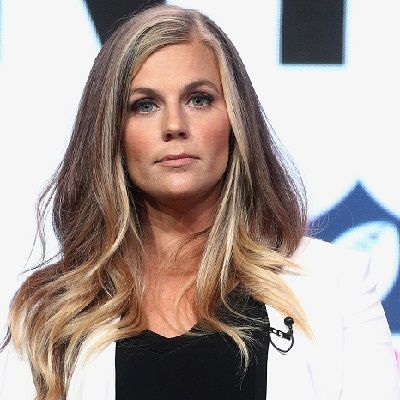 Samantha Ponder is 36 years old. She was born on December 11, 1985, in Phoenix, Arizona. Her birth name is Samantha Sainte Claire Steele. Ponder is the daughter of Cindi Steele and Jerry Steele. Furthermore, there is no more information regarding her family members.

Likewise, she belongs to the American nationality and ethnicity of North American. She is a Christian. Talking about her educational history, she attended Central High School in Phoenix. Then she attended The King’s College in New York City after high school.

Talking about her professional life, Samantha applied for a hostess job at ESPN Zone where she met Ben Keeperman, a college football researcher and manager with ABC Sports Radio and that led to an internship at the network which in turn led to a researcher-assistant job with ABC-TV on the college football studio show in New York City. 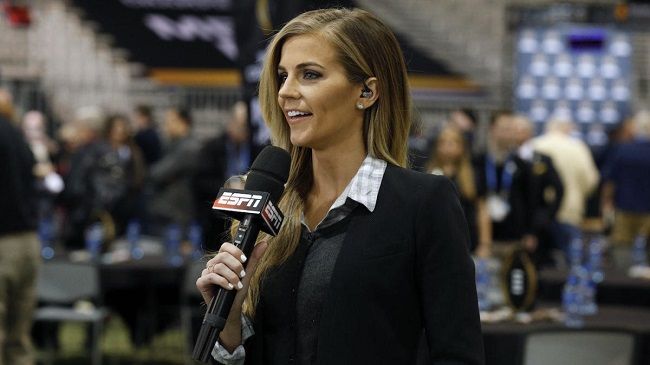 Moreover, Prior to hosting Sunday NFL Countdown, she worked as a reporter/host for ESPN college football and as a basketball sideline reporter. She replaced Erin Andrews on College GameDay Saturdays at 10 AM ET on ESPN, as well as co-host of the Saturday 9 AM ET edition on ESPNU. She also appeared on the ESPN-owned Texas-oriented regional network Longhorn Network.

Sam Ponder was named host of Sunday NFL Countdown in March 2017. She is just the third person to occupy this position in the 32-year history of ESPN’s Sunday morning NFL pregame show. In addition to her role as host, Ponder also contributes NFL interviews and features.

She is a former contributor to College Football Live and the six-time Emmy-award winning College GameDay Built by The Home Depot (2012-16). She also served as a reporter for the ABC Saturday Night Football telecast with Chris Fowler and Kirk Herbstreit in 2016.

Ponder started working at ESPN in 2011 and she also worked as a reporter for college football (Thursdays), as well as Longhorn Network events, studio shows, and feature stories out of the LHN studios in Austin, Texas. Additionally, she also served as a reporter for ESPN’s Tuesday and Saturday primetime college basketball games.

Prior to ESPN, Ponder was a host and reporter for Fox Sports where she contributed to both Fox Sports Net and Fox College’s coverage of college basketball and football in the Pac 10 and Big 12 conferences. As a host, she led the pregame, halftime and postgame studio shows for various events. It also included the Pac 10 Basketball Tournament and “Paradise Jam.” It is a preseason tournament in the U.S. Virgin Islands featuring teams from the ACC, Big East, and other various conferences.

Furthermore, Ponder also joined radio shows around the country during the college football and basketball seasons to discuss the latest news in college sports, and she was a former weekly columnist for FoxSports.com.

Prior to joining Fox College Sports, Seema interned with ABC Sports Radio and assisted with research on ABC Television’s College Football Studio show in New York. She also served as the sideline reporter and host for all football and men’s and women’s basketball games while in college at Liberty University in Lynchburg.

Samantha Ponder is a talented host. She has accompanied a great amount of net worth. Her estimated net worth is around $12.2 million. Precisely, she is reported to be earning $4.9 million working for ESPN. As a sportscaster, her salary is $39,059 or more excluding average bonuses.

Likewise, her husband Christian had an average annual salary of $2,509,269. Currently, he doesn’t have earnings from NFL and his net worth is assumed to be $5 million.  In combined, they have a net worth of about $17.5 million in 2019.

Moreover, they have owned a house that they bought for $880,000 at Lake Minnetonka. They sold it after 1.5 years for $1.095 million. Then, they also purchased a house in Phoenix, Arizona, worth $2.2 Million. Further, her husband is very fond of cars and owns several of them including Range Rover, Lavish Brabus SV12 R Biturbo 800, etc. His car collection is worth around $1 million.

Reflecting on Samantha’s relationship status, she is a married woman for a long time. She married a famous American football player Christian Ponder. The couple got married on December 17, 2012, in Hudson, Wisconsin. Then, she started appearing on ESPN/ABC broadcasts by her married name. Christian was a Minnesota Vikings quarterback at the time of their marriage.

The couple became parents of a daughter, Bowden Sainte-Claire who was named after Christian’s coach at Florida State, Bobby Bowden on July 2, 2014. She has also given birth to a boy, Robinson True, with Ponder in June 2017, and a girl, Price, in July 2018. They have been married for over seven years now and their relationship is going very well. 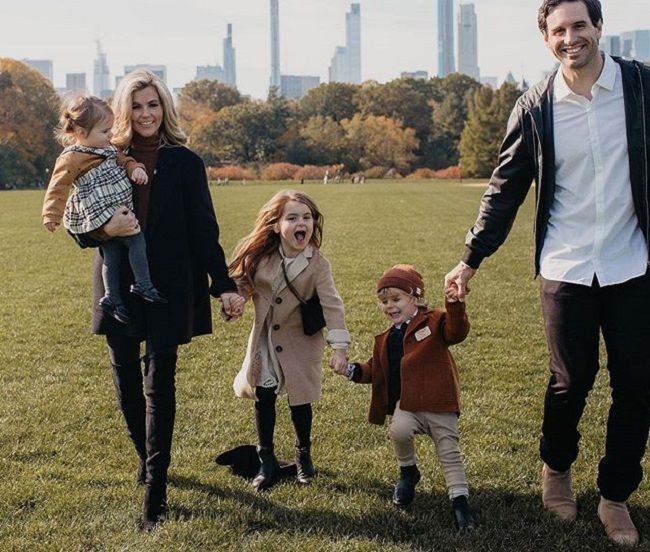 Caption: Samantha Ponder with her husband and kids (Source: Instagram)

There are no rumors regarding her personal as well as professional life. She has not been through any controversy recently.

The controversy resurfaced in October of 2017. Samantha Ponder spoke out against the company on the eve of ESPN2’s debut of the late-night show Barstool Van Talk. The show featured Pardon My Take podcast hosts Dan “Big Cat” Katz and PFT Commenter. The Sunday Morning Countdown host sarcastically greeted Katz by tweeting out screenshots of crude comments she thought he made about her in a 2014 blog post on Barstool Sports.

Katz responded to the tweet, claiming he did not write the post nor the editor’s note that referred to her as a “bible-thumping freak.” He also said he defended her in a video segment. He tweeted:

“Hey Sam, thanks for the welcome. I just want to clear one thing up, I didn’t write this blog post (you make it seem like I did) and the rundown you reference I actually defended you.”

She took to Twitter again on Tuesday to place the blame on Barstool founder and president Dave Portnoy. She tweeted:

“I was wrong in thinking @BarstoolBigCat wrote that article & called me a slut repeatedly. He just continuously laughed along,” she wrote. “It was the PRESIDENT of @barstoolsports who said these things. Happy to clarify.”

On Wednesday morning, Ponder sent out a series of tweets that addressed the controversy again, stating in part that:

“I am disappointed that we are promoting a company name that still maintains support for horrific personal attacks against multiple women within ESPN.”

Following this, ESPN canceled Barstool Van Talk after one episode. This came after she brought the explicit Dave Portnoy blog post and rant targeting her to the public eye. John Skipper, the then president of ESPN, made the executive decision to pull the plug on the content partnership. Following this, Portnoy called Samantha a “cancer just spreading and infecting the network.”

Furthermore, the Barstool Sports-Sam Ponder Feud cranked up to a whole new level in September 2018. On September 11, 2018, she wrote in her tweet that she did not want Barstool Van Talk to be canceled and that she had been willing to appear on the show to discuss her issues. To this, Portnoy responded with a post titled In The Face Of Plunging Ratings And Unheard of Unpopularity Sam Ponder Has Resorted To Flat Out Lying About Barstool Sports To Save Her Job At ESPN.

Samantha Ponder has an amazing personality and a stunning body. She has a height of 5 feet 6 inches and weighs 58kg.  Her body figure measures the size of 35-25-36. And her bra size is 32C and the shoe size is 6 US. Likewise, she has blonde hair and blue eyes. 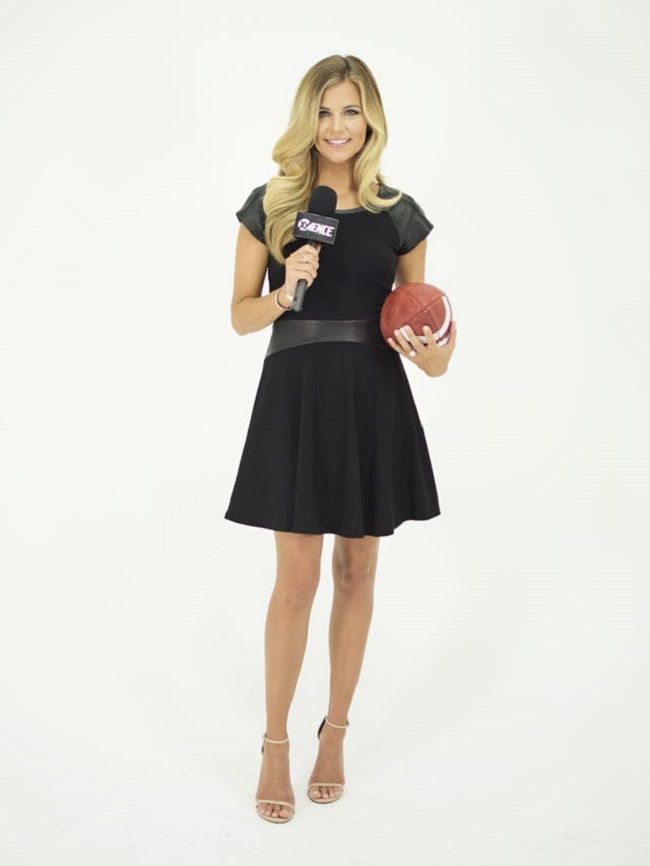