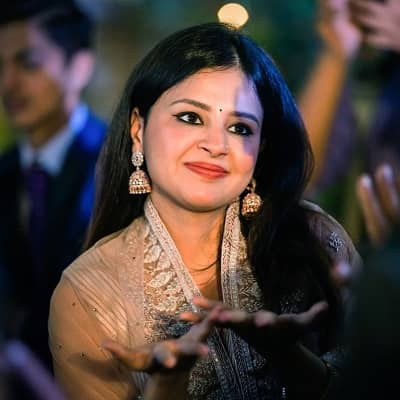 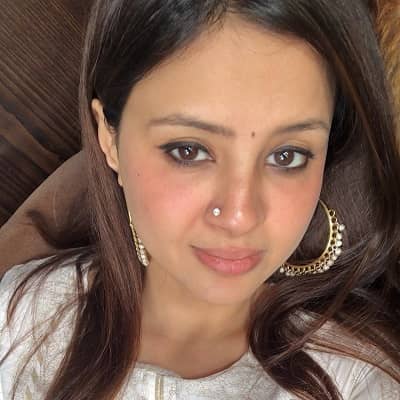 Sakshi Dhoni is the wife of the most famous Indian cricketer, Mahendra Singh Dhoni also known as MS Dhoni. Sakshi Dhoni gained the media’s and public’s attention after her marriage with the cricketer.

The celebrity wife’s real name is Sakshi Singh Rawat. Her date of birth is 19 November 1988 and her birthplace is Guwahati, Assam, India. Likewise, her zodiac sign Is Scorpio. Sakshi holds an Indian nationality and belongs to Asian ethnicity. Her current age is 32 years. Interestingly, even though she was born in Assam but her hometown is in Dehradun, Uttarakhand, India. The beautiful girl was born to her parent’s father, R K Singh, and mother, Sheila Singh. Sakshi also has two siblings, a brother, Akshay Singh, and a sister, Abhilasha Bisht.

Furthermore, she was born in a Hindu family. Coming to her academic background. She went to the Welhan Girls’ School of Dehradun for her school. However, she was transferred to Jawahar Vidya Mandi of Ranchi. She met her husband in the same school. Also, she and Bollywood actress, Anushka Sharma studied together in the same school in Guwahati. Then, for her further studies, she attended the Institute of Hotel Management at Aurangabad, where she graduated in Hotel Management. 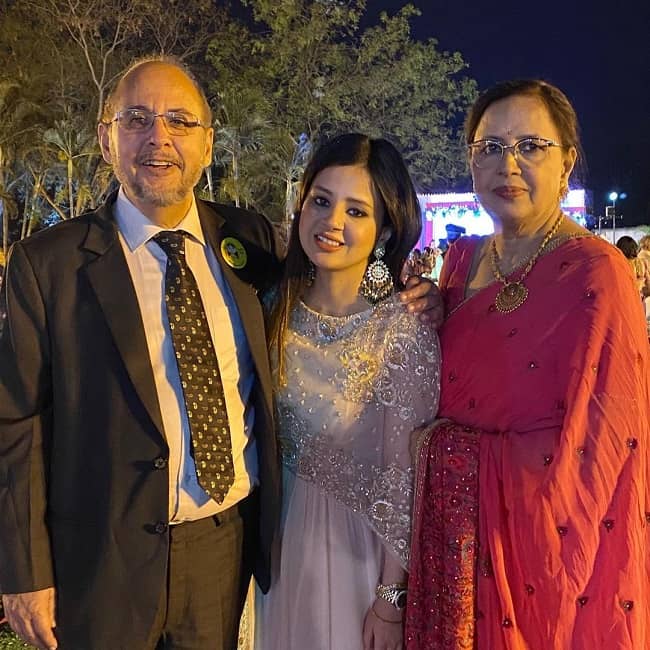 Sakshi previously was the director of the company, Rhiti MSD Alamode Pvt. Ltd. It is a sports association located in New Delhi. She also did her internship at Taj Bengal, Kolkata. In fact, Sakshi met her husband there as well. She came into the spotlight after her fairytale wedding with the popular and amazing cricketer, MD Dhoni. Moreover, Sakshi manages and operates a foundation named Sakshi Rawat Foundation, to support and help the orphans. Her best friend’s name is Poorna. She is the daughter of politician Praful Patel of the NCP Party.

Also, she often shows her presence cheering her husband and his team on various matches. Shakshi is believed to be Dhoni’s lucky charm. Immediately, after their wedding, Dhoni became the winner of the topmost championships which includes the ICC World Cup 2011. As of now, Sakshi is just parenting her beautiful daughter and helping her husband and her family. Besides her career and professional life, her hobbies are cooking and listening to music. She loves to eat Butter chicken. 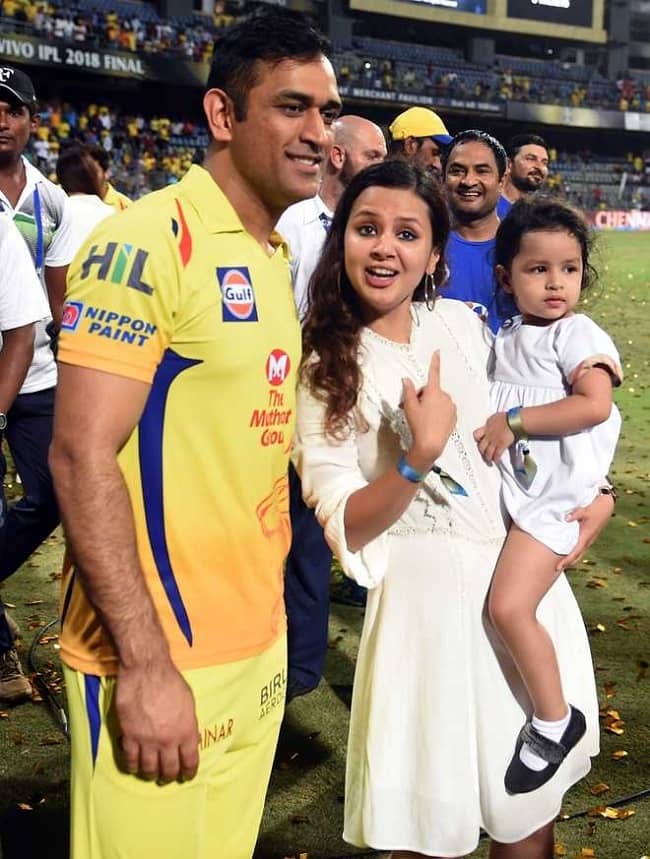 Caption: Sakshi Dhoni with her family at the cricket field cheering her husband (Source: The Tribune)

Sakshi must have earned a decent amount of money from her previous profession as a director. As of now, her net worth is not public. On the other hand, her husband, MS Dhoni has a great net worth of ₹760 crores ($101 million). His income sources include the Board of Control of Cricket in India (BCCI) as a former Indian cricket player and also from the Chennai franchise in the IPL. Additionally, Dhoni earns more from his other more endorsement deals and business ventures as well. MS Dhoni is the co-owner of India League team Ranchi Rays and Chennaiyin FC, a football club presenting in the Indian Super League.

The celebrity wife is already married. She is married to the most famous cricketer, MS Dhoni (Mahendra Singh Dhoni). She changed her name to Sakshi Dhoni after her marriage. Her father-in-law is Pan Singh and her mother-in-law is Devki Singh. Also, her brother-in-law is Narendra Singh Dhoni, who is a politician. Similarly, she also has a sister-in-law, whose name is Jayanti Gupta. She and Dhoni knew each other well, however, their feeling for each other grew in the winters of 2007 after they met in Kolkata with the help of Yudhajit Dutta (Dhoni’s manager and friend). Dhoni was the one to ask her number from his manager.

After he got her number, he later sent a message to her. At first, she did not believe it. Then they began dating each other from March 2008 for three years and eventually got married in a low-profile ceremony on 4th July 2010. Moreover, Sakshi was studying with Dhoni for a while in Jawahar Vidya Mandir, Ranchi. The couple is blessed with a beautiful daughter, Ziva who was born in February 2015. Additionally, Sakshi’s and also Dhoni’s father both was a colleague of the same company, Mecon. Her husband, MS Dhoni says that her wife is on his 3rd priority list. The first one is his country and the second is his family. 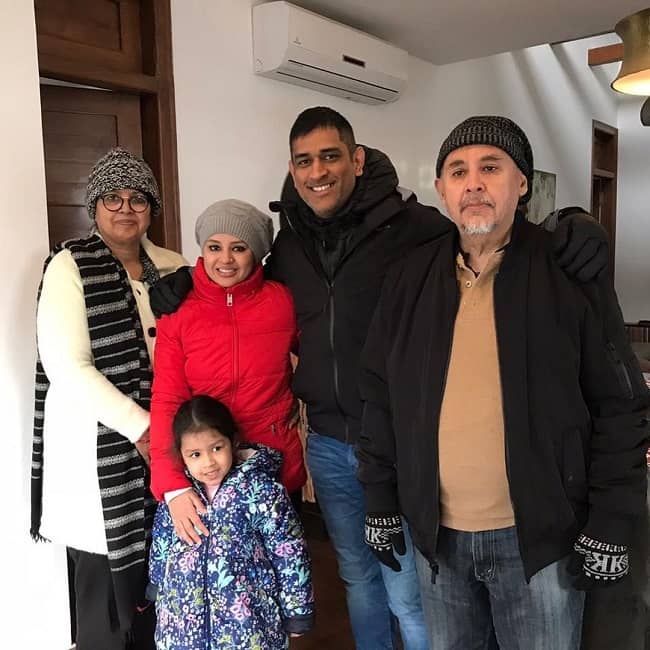 Sakshi was seen in some of the controversies. Her image with Vindoo Singh in the year 2013 was captured a lot of controversies as he also had some involvement in IPL spot-fixing. In the year 2016, a man, Dennis Arora recorded a case in opposite to Sakshi and 3 others, Arun Pandey, Shubhawati Pandey, and Pratima Pandey for their claimed involvement in a multi-crore swindling. The situation took place when she was the director of Rhiti MSD Alamode Pvt. Ltd. The company had goods in gym and fitness center, Sportsfit World.

Denni’s dad had thirty-nine percent support at the gym, which was worth Rs. 11 crores, and was only paid Rs. 2.5 crores. Dennis claimed that his dad was only paid Rs. 2.5 crores. However, according to Arun Pandey, Sakshi had already quit the company a year ago. In addition, Sakshi was trolled for wearing a Manish Malhotra’s designed lehenga at her friend, Prerna Patel’s wedding; saying that the dress was inappropriate in 2018.

In addition, Sakshi posted an image with her husband where he was tying her shoelaces with the caption “You paid for the shoe, you tie them too”. The image went viral and she got many negative comments there. People began trolling her and also said that she was nothing without her husband and her celebrity status came because of him only. To reply to all those people, Sakshi uploaded another image where again Dhoni was trying to break her bracelet, with the caption, “you paid for the band, so you screw it too”. This shut down all the haters and trollers.

Regarding the celebrity wife’s physical appearance, she stands at the height of 5 feet 2 inches or else 158 cm or 1.58 m. Also, she has a bodyweight of 46 kg or 101 lbs. Similarly, her body measurements are 34-26-34 inches. She has a curvy body with a medium complexion. She loves wearing kajal in her eyes which makes her even more beautiful. Moreover, Sakshi has a pair of brown eyes with black color hair. Sakshi does not smoke and also does not drink alcohol.

Lastly, talking about her presence on the social media platform, she is quite active there. She often uploads images of her, her family, and he going to various events. We can see how perfect and amazing is Sakshi as a friend, mother, daughter, and wife as well. She has an Instagram account with 4.4 million followers and a Twitter account with 367.1 K followers. The celebrity wife even has a Facebook page where she has 696 K followers. It means, she is quite active on social media platforms.