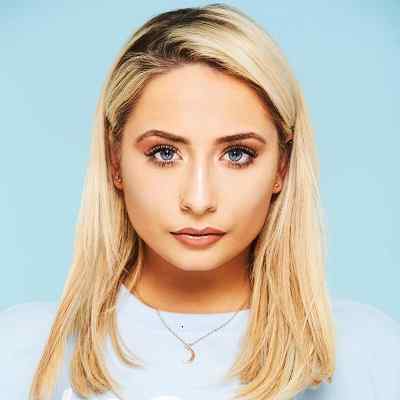 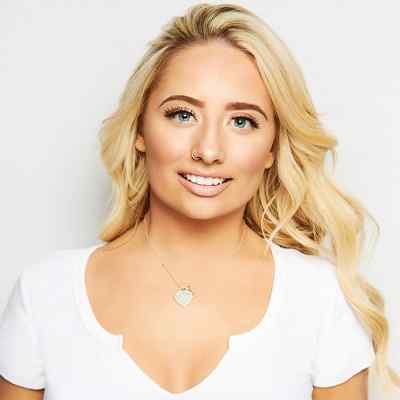 Saffron Barker is a British social media influencer who teamed up with three other girls to form the band Born2Blush. Saffron Barker is also a YouTube star with her self-titled YouTube channel with more than 2.45 million subscribers.

Saffron Barker is 22 years old. She was born on July 24, 2000, in Brighton, England, under the astrological sign of Cancer.

She holds British nationality but has not mentioned her ethnic background. There f no information regarding her educational background. 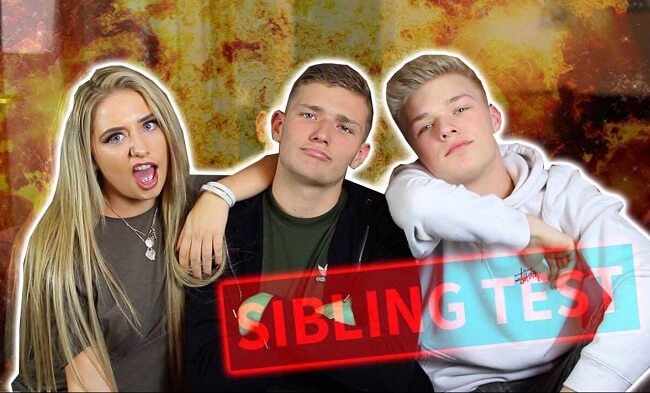 On Instagram, she has verified accounts with more than 1.7 million followers under the username @saffronbarker. Likewise, she has almost 556.2K Followers and over 57k followers on Facebook.

Reflecting on Saffron Barker’s personal life, she is straight and linked in a romantic relationship. She is currently dating a guy named Tyler Dixon.

She has even posted beautiful duo pictures captioned with lovely words. They seem to be serious about their relationship. 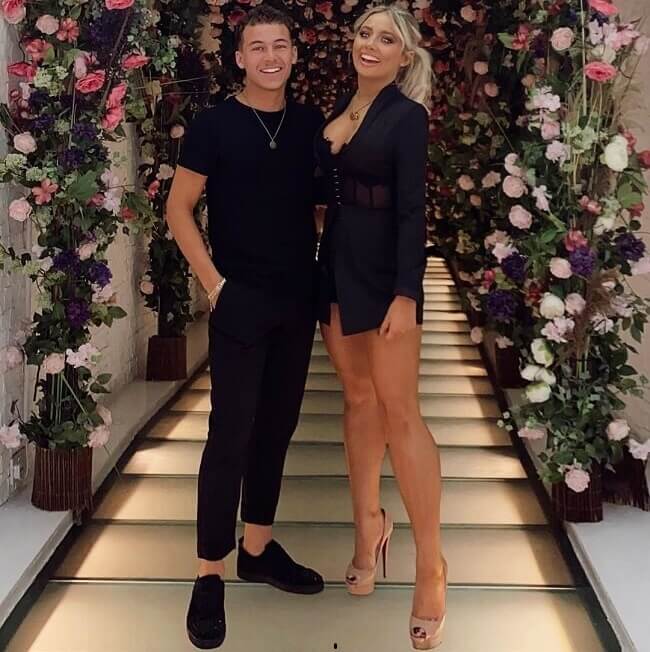 Caption: Saffron Barker posing with her boyfriend, Tyler Dixon for a photo(Source: Instagram)

Moreover, she has previously linked with other guys as well. She previously dated a fellow internet personality Jake Mitchell from 2015 to 2016.

She even has featured him on several YouTube videos with a boyfriend tag.

After her public break-up with Mitchell, there were rumors about her link-up with fellow YouTuber Joe Weller.

Further, she was also suspected of dating a London-based musician Harvey but neither has made any statements on the matter as of yet, except for a few cryptic Twitter exchanges.

Professionally, Saffron Barker is a British singer and YouTuber who is one of Britain’s most prominent social media celebrities.

At the age of three years old She teamed up with three other girls to form the band Born2Blush. Other band members are Libby Whitehouse, Jazmine Tiley, and Georgia McNamara.

In the early 2010s, they began singing together. They also released an original single called “24seven.” The band also has appeared in multiple national-level singing competitions in England.

In May 2014, the band started a YouTube Channel where they posted their cover of Bruno Mars Uptown Funk’. Later in 2015, the band broke up.

Then, on Jul 30, 2015, Barker set up her self-titled YouTube channel. On this channel, she shares a variety of lifestyle, beauty, and challenge videos including routine videos, boyfriend and girlfriend videos, q&as, makeup & beauty tutorials, clothing, and American hauls, and more.

Her first YouTube video posted on the channel is “ARRIVING IN FLORIDA!.” Uploaded in August 2015, she documented her visit to Florida.

Following her popularity as a band member of  Born2Blush, she gained good viewers initially. The first video garnered more than 239k views.

Since then she has accumulated 364 million views in total with more than 2.45M subscribers (As of July 2020).

One of her most popular videos, ‘Types of Boyfriend’ also starred her then-boyfriend Jake Mitchell, which had 9.8 million views. Some of her other popular videos are “I swapped DIETS with a 7-year-old for 24 hours!!,” “I only ate PINK food for 24 HOURS challenge!!!,” and “I only ate RED food for 24 HOURS challenge!!!.” In a very few years, she has risen from uncertainty to global fame. 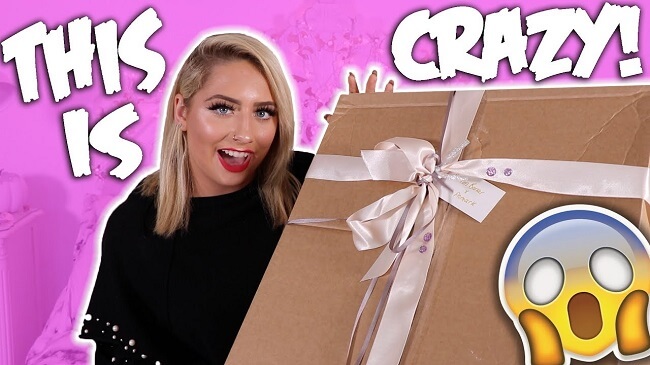 Side by side, she also created her vlogging youtube channel SaffronBarkerVlogs on  October 27, 2015. This channel also has flourished with millions of subscribers and has 1.09M subscribers.

Her vlogging videos are fun to watch. This active teenager is confident and smart.

To her viewers, she is a long-distance best friend with whom she laughs, shares her happiness, and cries with her, being there in her moments of sorrow.

Some of the popular vlogging videos with millions of crossed views include “PROM DAY!!,” “it’s okay to cry sometimes..” “Telling my family I’m going on Strictly Come Dancing..” “RANDOM MAN HEAD DUNKED ME UNDER WATER!!!.”

In late 2016, she became one of the 25 YouTubers who recorded ‘Christmas Without You, a charity Christmas single benefiting ‘The Make-A-Wish Foundation.

The song was written by Grammy Award-winning songwriters Jackie Boys’. She has also hosted a six-episode original series for TalkTalk TV titled, ‘In My Day’, where she and other members of her family discuss different topics from the perspective of different generations.

Moreover, she has involved herself with several charities. She has even raised funds for ‘Cancer Research UK’. She is also a part of the ‘Being Me’ Campaign.

Her interesting way of portraying social media handles has undoubtedly attracted decent fan followers on other media sites as well.

Speaking on Saffron Barker’s earnings, she is a famous YouTuber as well as a social media influencer who has earned undoubtedly a decent sum of money through her work.

Additionally, she also appeared in several events. Through her YouTube video, she has made around 625k dollars. Therefore, her estimated net worth is around $1 million.

Moreover, she is living a healthy lavish lifestyle. However, her information regarding other assets like cars, houses, etc is not available.

Being a social media personality, Saffron Barker’s most of her details are publicly opened.

As her maternal grandfather Peter Hewlett, Barker’s maternal, said in the very first episode of ‘In My Day’, the cost of fame is privacy, and she seems to be paying it.

Likewise, previously while dating Jake Mitchell in late 2016, her then-boyfriend uploaded a picture on Snapchat of himself sleeping in someone’s bed.

The internet erupted with different thoughts. Their fan quickly reasoned that it was neither his nor Barker’s bed.

Later, she found out that he had cheated on her with Claudia Naya, a girl from their secondary school.

Though Mitchell strictly denied it, and his sister, Eloise, also came to his defense, things took a turn for the worse.

Mitchell’s father, Rob, was even accused of bullying Barker through a fake Twitter account. Later the duo broke up soon after.

As of now, she is controversy-free and living a healthy beautiful life with a good image profile on social media platforms with her fan followers.

Beautiful 20-years-old Saffron Barker has a very charming personality. Her attractive personality has attracted lots of fans following her.

She has beautiful eyes with dazzling blue color. Her hair color is blonde and has a medium-sized haircut. Similarly, she has a good height of 5 feet 2 inches tall as mentioned on Twitter.

On Twitter, she stated her height saying “I’m 5’2” and on another occasion “it’s weird to think people who are 5ft are only 5 subways long. She weighs around 121 lbs or 55 Kg. Other body statics are not available.