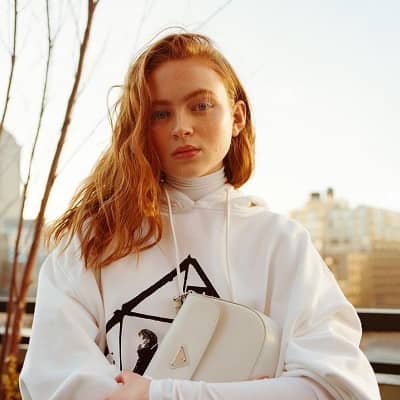 Sadie Sink is an actress from America. Moreover, Sadie Sink is best known for her role as Max Mayfield in the Netflix science fiction series Stranger Things (2017–present).

Sadie Elizabeth Sink best known as Sadie Sink was born on the 16th of April, 2002, in Brenham, Texas, the United States of America. According to her birth date, she is 20 years old and holds an American nationality.

In addition, she has a birth sign of Aries and believes in Christianity by religion. Moreover, she is the daughter of Casey Adam Sink (father) and Lori Elizabeth Sink (mother).

Professionally, her father is a local football coach in the US and her mother is a homemaker. She grew up with her four siblings named Caleb, Spencer, Mitchell, and Jacey Sink.

Regarding her academic career, she attended Summit Senior High School. Other than that, this girl has not shared further information when it comes to her graduation.

From a young age, she started taking part in a local community theater to fulfill her goal of acting in front of a large group. She performed on stage with her real-life brother in a number of her early stage productions because she felt more comfortable doing so.

Moreover, she won the part in an audition for the ‘Broadway,’ production of ‘Annie’ in 2012. She was only ten years old at the time, and the experience was very fulfilling for her.

Soon after, her parents moved to New Jersey, which helped her career goals even more. She began voice and dance training as soon as she arrived in the big city so that she could perform better in musicals and ‘Broadway,’ productions.

She began going to various TV and film auditions by the time she was 13 years old. Moreover, she was able to secure some early roles due to her ‘Broadway,’ performances. She made her screen debut in 2013, playing the little part of “Lana” in the episode “Mutually Assured Destruction” of the television show “The Americans.”

Even though she had little part in the show and hardly appeared on television, she benefited greatly from it. One of the most critically and economically successful series of the year was the spy-thriller series.

Later, she made an appearance in a part on “Blue Bloods” that was a little bit better. In “Insult to Injury,” one of its episodes, she portrayed “Daisy Carpenter.” The police procedural television series was a hit. Most of it was filmed in the New York suburbs, nearer Sadie’s home in New Jersey.

She found it challenging to balance her education with her stage and screen roles due to her great playing career. She had a difficult time because her mother prohibited her from making academic sacrifices.

She landed her first career-breakthrough role in 2015. In addition, she received an offer for one of the series’ lead roles in “American Odyssey.” She portrayed the part of the lead couple’s daughter. She played the part of “Suzanne Ballard” in 11 episodes of the show.

The political suspense novel was released in 2015 and ran for one season. It received a mix of positive and middling reviews. The sitcom was canceled by “NBC” because of its rising costs. But Sadie’s part in the show served as a springboard for her next series, which ended up becoming a role that changed her life.

This actress made her big-screen debut in 2016 in the biographical drama “Chuck,” which was based on the life of boxer Chuck Wepner, playing the part of “Kimberley.” At the “Venice Film Festival,” the movie received its worldwide premiere. When it was released in the US in 2017, it received a lot of positive reviews from critics.

When she received a call in September 2016 inviting her to an audition for a part in the series, she had already become a fan of “Stranger Things.” She didn’t know exactly how well her meeting had gone. Her mother told her about the choice when she was at school. For her role, she had to go through a slight physical makeover. 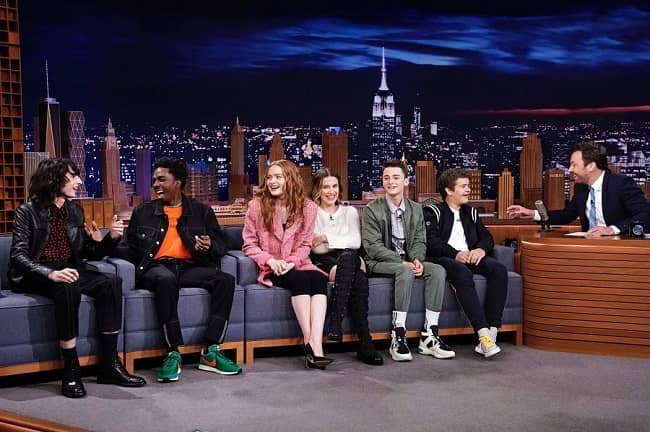 She also studied skateboarding to further reflect her role as “Maxine “Max” Mayfield.” In the second season of the series, Sadie started working there. She portrayed a tomboy and two of the series’ key lads’ crushes. Her rise to fame around the world was greatly helped by the series’ tremendous global success.

Other movies, television series, and modeling

She made an appearance in the 2017 biographical drama film “The Glass Castle,” which was based on Jeannette Walls’ biography. In the movie, Sadie portrayed a young “Lori Walls.” Critics gave the film a range of ratings. She also gave the voiceover for the documentary “Dominion” in 2018.

Additionally, she is a model who walked at the Paris Fashion Week in 2018. She made the ramp at the age of only 15. She has also appeared for several other well-known brands.

As of now, this girl has not earned any awards but has been nominated for several awards in her profession. In 2018, she was nominated for Screen Actors Guild Award for an Outstanding Performance by an Ensemble in a Drama Series. 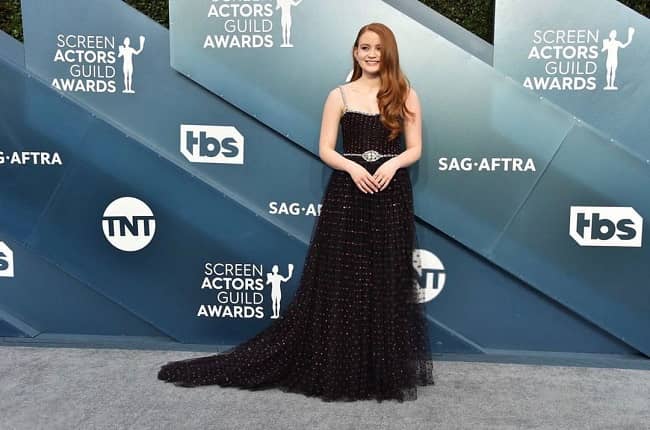 It’s too early for Sadie Sink to get married. Currently, she is in her late teen years. However, this actress is not married and is single.

She made headlines in 2021 as a result of relationship rumors. According to rumors, she has seen Patrick Alwyn, Joe Alwyn’s brother. After they were seen together, dating news started to spread.

Sadie stands 5 feet 3 inches tall with weighs around 48 kg. Moreover, she has blue eyes with red hair color and a slim body build.