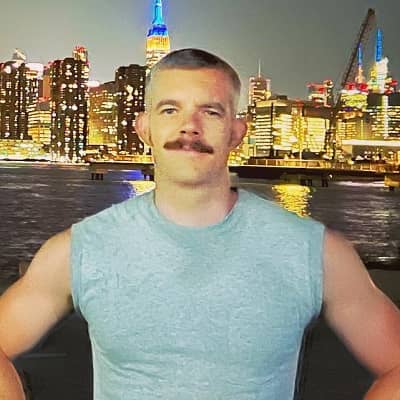 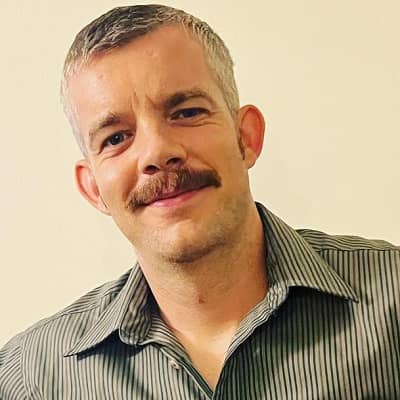 Russell Tovey is an English actor. Moreover, Russell Tovey is best known for playing the role of werewolf George Sands in the BBC’s supernatural comedy-drama, Being Human.

Russell George Tovey best known as Russell Tovey was born on the 14th of November, 1981, in Billericay, Essex, England. According to his birth date, he is 40 years old and holds British nationality.

Moreover, he has a birth sign of Scorpio and his ethnical background is unknown. He is the son of George Tovey (father) and Carole Haynes (mother).

Moreover, he grew up with his elder brother, Daniel Tovey. He was raised in a middle-class family where his father ran a bus company that transferred passengers from Essex to Gatwick Airport.

Talking about his academic career, he attended Harold Court School, and later Shenfield High School. As a teenager, he was an avid collector of various things and prone to participating in fads.

His parents encouraged him, taking him to archaeological digs and museums, buying him a metal detector, and taking him to mineral conventions. He originally intended to be a history teacher, but after seeing Dead Poets Society, The Goonies, and Stand By Me, he changed his mind.

He joined a local theatre when he was 11 and started acting classes. Although it wasn’t his biggest claim to fame, his 12-year-old appearance in a ketchup ad did help him gain attention.

He joined the Business and Technology Education Council at Barking College after receiving his high school degree. But by that point, his acting career had taken off, and he started skipping roles in college productions. As a result, he was expelled from the college.

Russell Tovey had a couple of TV commercial appearances while he was a preteen. He finally drew the notice of a talent agency, and as a result of the acting work, he started missing school lessons.

His mother encouraged him to carry on even if his father wanted him to focus more on his education. He made his television debut in 1994 in the CBBC series “Mud,” as Bill Bailey.

In addition, he made an appearance in every episode of the show, and critics praised his performance. He had another notable television appearance in 1996 when he played Dennis Sealey in the educational children’s television series “Spywatch.”

Moreover, he also had significant parts in plays presented at the National Theatre, including “His Dark Materials” and “His Girl Friday.”

He mostly made appearances on television in the late 1990s and early 2000s, playing cameo and guest appearances in a variety of shows like “The Mrs. Bradley Mysteries,” “The Bill,” and “Silent Witness.”

He made his acting debut in a feature film in 2001 with a minor part as a recruit in the British historical drama “The Emperor’s New Clothes.”

In the television series “Messiah IV: The Harrowing,” he was featured as Robbie McManus in 2005. The next year, he played a minor student character in the comedy movie “The History Boys.”

In the mid of the 2000s, he continued to engage in theater productions, particularly in London, in addition to his work in television and film. In plays like “A Respectable Wedding,” “The Laramie Project,” and “The Sea,” he was seen in significant parts.

He started appearing as Budgie in the Gavin & Stacey series in 2007 and then played Ben in the television series Annually Retentive.

His fame and popularity grew as a result of his performance as George Sands. He was able to attract the interest of additional producers and directors due to the popularity of the series.

In the fourth season, his on-screen personality passes away, bringing an end to his engagement with the show. Russell Tovey, who played George in “Being Human,” has had appearances in other tv programs.

He portrayed John Chivery in 10 episodes of the TV show “Little Dorrit” from 2008 to 2010, and he later had an appearance in the show’s pilot, “The Increasingly Poor Decisions of Todd Margaret.”

He was selected in 2010 to play the title character in the comedy series “Him & Her,” in which he portrayed Steve Marshall for 25 episodes. The four seasons of the show received positive reviews.

Additionally, he appeared in supporting parts in shows like “The Dog Rescuers” and “What Remains” in the early 2010s. Furthermore, he had an appearance in the BBC television series “Sherlock,” where he played Henry Knight in the episode “The Hounds of Baskerville.”

His film career also increased starting in 2012. He played Dr. Smith, one of the major characters, in the comedy movie “Grabbers” in 2012. He continued to make appearances in important roles in movies like “Pride,” “Effie Gray,” and “Tower Block” for the following several years.

In terms of his television work, he participated in series like “Looking” and “The Job Lot” and narrated the popular documentary series “Sun, Sex and Suspicious Parents” from 2011 to 2015.

He experienced yet another significant career turning point in 2016 when he started appearing regularly in the American drama thriller series “Quantico.” He appeared in the show’s second and third seasons, and critics praised his performance.

He garnered much more praise from critics in 2016 for his major performance as a football player named Jason in the drama movie “The Pass.” The BFI Flare Film Festival hosted the movie’s world premiere, and critics praised him for giving one of his greatest performances to date.

He has had prominent parts in movies including “The Good Liar” and “Mindhorn.” Moreover, he also made an appearance in the comedy series “Shane the Chef” in 2018 in the title role.

In 2019, he appeared alongside Helen Mirren and Ian McKellen in the drama film The Good Liar and co-starred in the television series, Years and Years with an ensemble cast. He was announced to have been cast in Richard Eyre’s 2021 movie Allelujah, which is based on the play of the same name by Allan Bennet.

He is also a dramatist, screenwriter, and writer. Three of his plays have not yet been performed as of August 2010, and one of his short pieces was included in the women’s magazine Company.

Victor, a short film that he also wrote, was being produced as of August 2010 with the help of funding. He co-authored the 2021 book Talk Art with his friend Robert Diament. 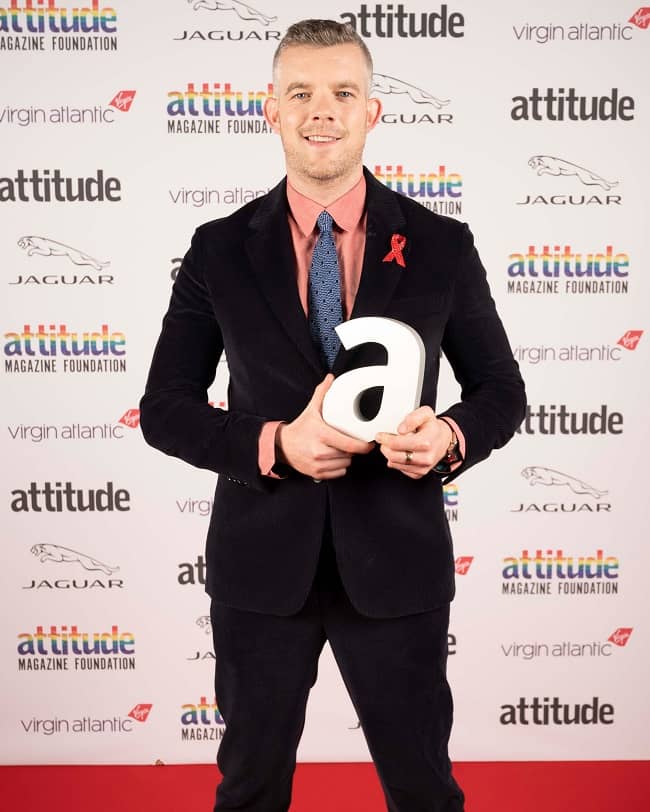 As an English actor and writer, he has earned a huge sum of money in his career. Moreover, his net worth estimates at around $4 million, and has not shared information regarding his salary and income.

In 2016, he began dating Steve Brockman, a rugby coach. They get engaged in March 2018, however, they subsequently broke up before getting back together in 2019. 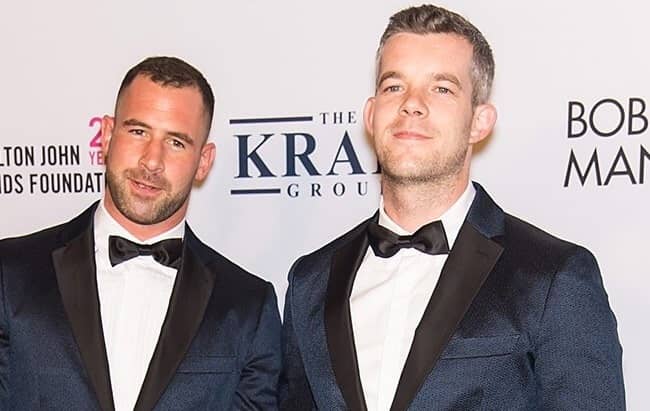 Since that time, they have been dating. He revealed being gay and said he came to peace with it when he was 15 years old, but it wasn’t until he was 18 that he felt very confident enough to tell his parents.

This actor stands 5 feet 9 inches tall and weighs around 70 kg. Moreover, Russell has grey hair with brown eyes color and an athletic body type. Moreover, she has a waist of 30 inches. 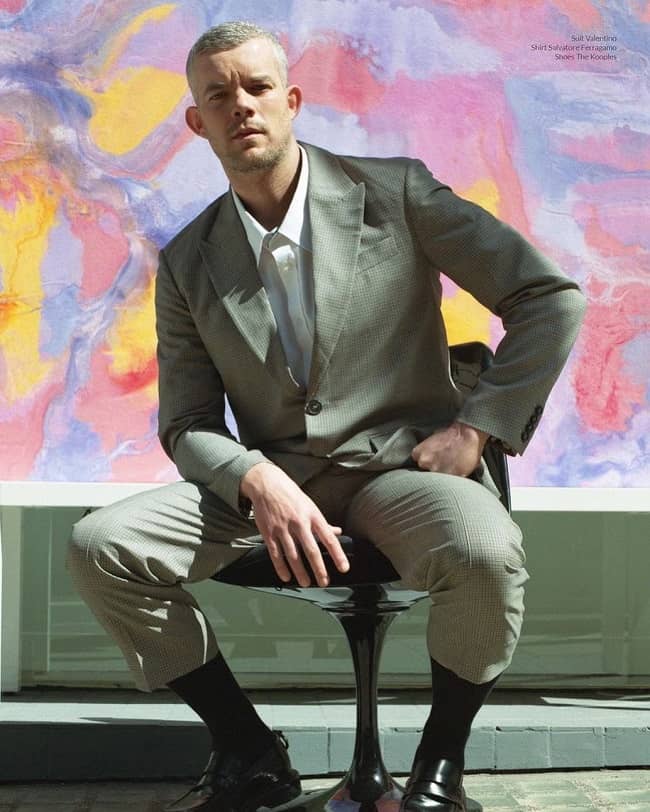