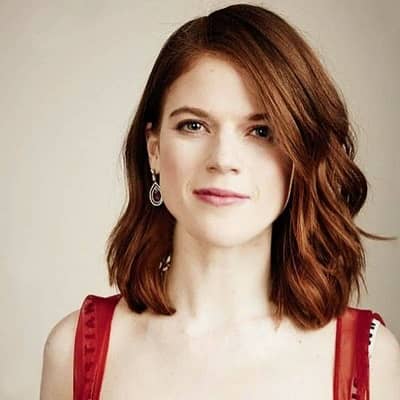 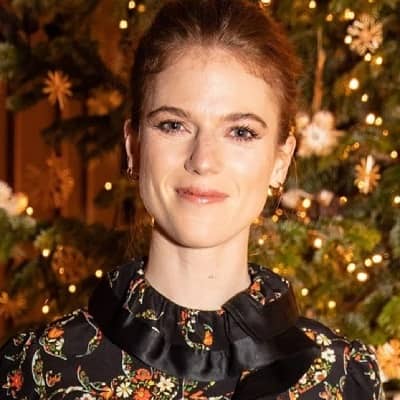 Rose Leslie is a Scottish actress. Rose Leslie is best known for her role as Ygritte in the American fantasy drama television series “Game of Thrones”. In the series, she played for 17 episodes from 2012 to 2014. Similarly, she also starred as Gwen Dawson in the ITV drama series “Downton Abbey”.

Rose Leslie was born on February 9, 1987, in Aberdeen, Scotland, UK. As of the year 2022, her age is 35 years old. Rose Eleanor Arbuthnot-Leslie is her given name. Her nationality is Scottish. Her ethnicity is mixed (Scottish, English, and Mexican), and her zodiac sign is Aquarius.

Similarly, her father is the Aberdeen Chieftain of Clan Leslie, while her mother is a Lovat Fraser. She has two brothers, William and John Leslie, as well as two sisters, Portia and Sofia Leslie. Furthermore, Simon Fraser, a descendent of King Charles III, was her maternal great-grandfather, and her other great-grandpa, Fredrick Wield, was New Zealand’s sixth prime minister. She grew up in Aberdeen with her siblings at one of her ancestor’s 15th century Lickleyhead Castle.

As a member of the royal family, she experienced a lavish existence as a youngster. She attended Rayne North School for her education. She then enrolled in a co-educational independent school “Millfield”. Likewise, she had an interest in performing since she was a youngster, and she eventually decided to pursue a career as an actor. Her parents supported her decision, and she went on to study acting at the London Academy of Music and Dramatic Art, where she earned a Bachelor of Arts degree with Honours in 2008.

She spent three years in France honing her acting talents. In 2005, she returned to London to act as a narrator for BBC Radio’s The British Slave Trade: Abolition, Parliament, and People. Moreover, she also holds a stage combat qualification from the British Academy of Stage and Screen Combat (BASSC). She appeared in a number of stage productions, including Romeo and Juliet, Can-Can, Pericles, The Learned Ladies, Uncle Vanya, and Antigone.

Rose Leslie began her professional acting career in 2008 when she starred as Kim in an episode of the British television series “Banged Up Abroad”. She rose to prominence in the 2009 television film “New Town” as Rhian. Her performance got her a British Academy Scotland New Talents Award for Best Acting Performance in 2009. Her performance in the film gained widespread acclaim, paving the way for her to land additional important parts. In 2010, she began her breakout role as Gwen Dawson in the ITV drama series “Downton Abbey”. Then remained in the series until 2011, then she returned in 2015 to resume her role as Dawson.

She did, however, leave the show after a season. She appears in eight episodes of the series. In 2012, she played Fiona in the teen romance drama film “Now Is Good”. In 2012, Leslie began playing the most important role of her career, Ygritte, in the American fantasy drama television series “Game of Thrones”. She reprised her role in the series for the second, third, and fourth seasons. Her series cast was nominated for a Screen Actors Guild Award for Outstanding Performance by an Ensemble in a Drama Series in 2013. Before departing the show in 2014, she featured in 17 episodes.

In 2017, she began playing the main character Maia Rindell in the American legal web series “The Good Fight”. She remained with the show till 2019. She has appeared in a number of television shows, including “Luther,” “Revolting Rhymes,” “Blandings,” “Vera,” and “Case Histories”. In 2019, she also appeared on the American late-night live television sketch comedy show “Saturday Night Live”. She also supplied the voice for the female character “En” in the 2017 video game “Echo”. In addition, she will be featured as Louise in Kenneth Branagh’s forthcoming mystery thriller film “Death on the Nile”.

She will appear in the forthcoming BBC series “Vigil” in January 2020. She is now working on her forthcoming film and television series. 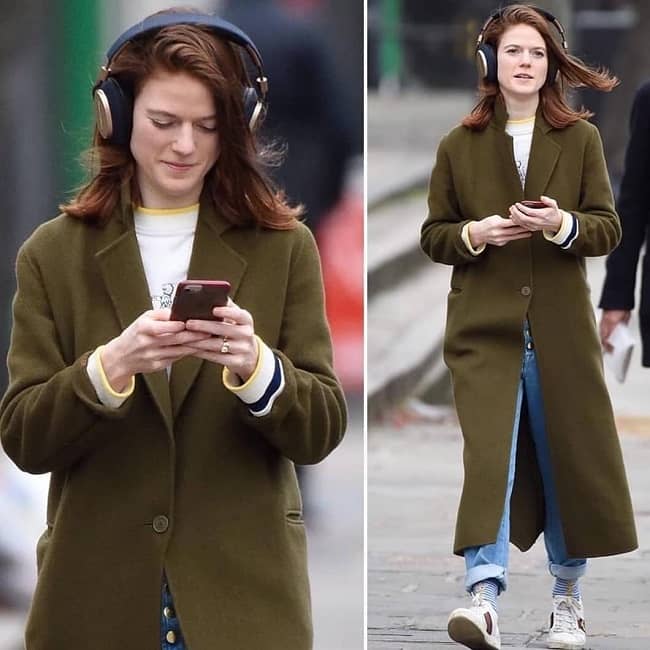 Caption: Rose Leslie was captured on the street (Source: Instagram)

Rose Leslie has amassed a sizable income as an actress since her debut in 2005. As of 2020, her net worth is predicted to be $4 million, while her husband’s net worth is $12 million. Her net worth comprises all of her possessions as well as her current earnings. She also makes money from her endorsement relationships with other products. With her money, she is currently living a luxury lifestyle.

Rose Leslie, a Scottish actress, is married. Kit Harington is her husband. Harington is an English actor and producer best known for playing Jon Snow in the American fantasy television series “Game of Thrones” from 2011 to 2019. They met for the first time in the Game of Thrones cast. They met in 2011 and began dating. On September 27, 2020, the pair announced their engagement in The Times’ ‘Forthcoming Marriages’ section.

After dating for around 8 years, the pair married on June 23, 2018, at Rayne Parish Church in Leslie’s homeland of Aberdeenshire, Scotland. Their wedding celebration was held at Wardhill Castle. Similarly, the couple is expecting their first child on September 26, 2020, after Leslie’s photo in a black dress was released by The UK’s Make magazine editor.

The couple, however, has not revealed that they are expecting their first child. She is currently living happily with her husband in Suffolk, England, at the couple’s £1.75 million 15th-century country house. They also have a dog as a pet. 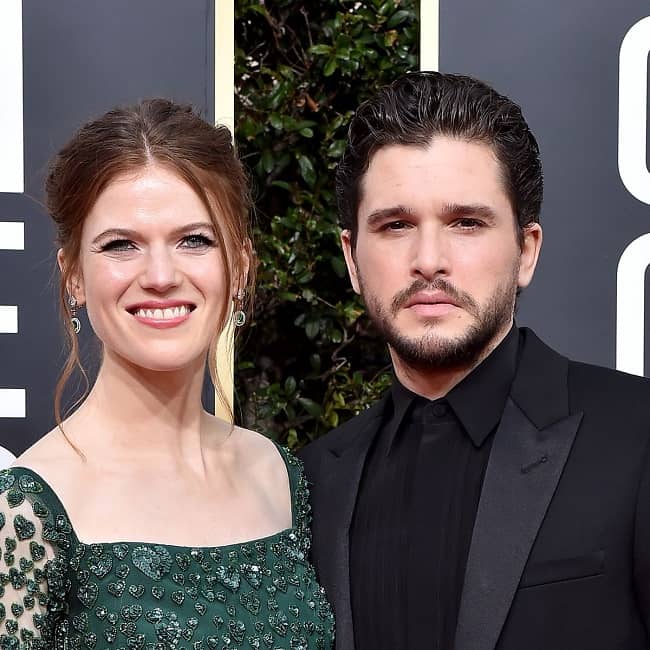 Rose Leslie, 33, is a thin woman with a well-maintained figure. She is a stunning woman with red-brown hair and blue eyes. She is 5 feet 6 inches(168cm) tall and weighs 54kg. Her physical dimensions are 33-24-35 inches. Her physique is shaped like a banana. She wears a size 7 shoe (US). Her dress size is a six (US).