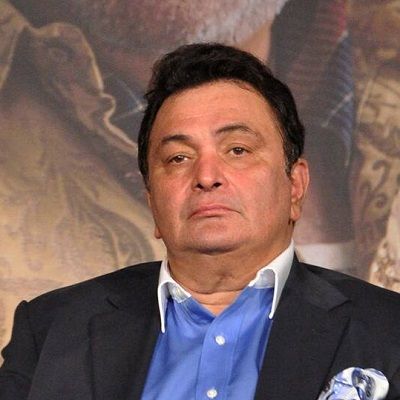 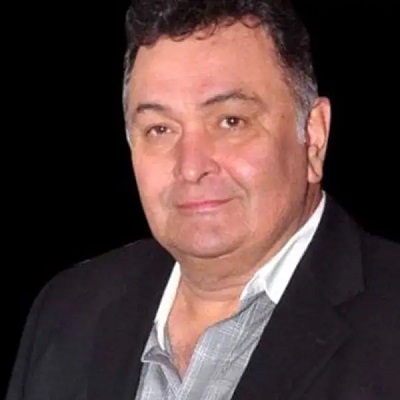 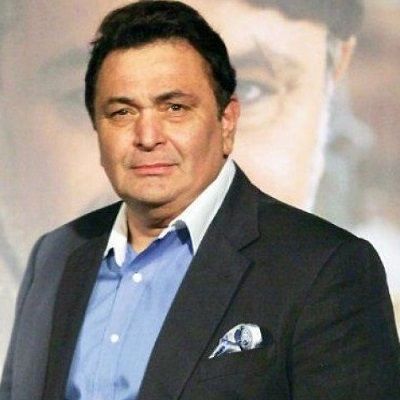 Rishi Kapoor was an Indian actor, director, and producer who is famous for his work in Hindi cinema.  Rishi Kapoor has received several outstanding awards for his acting skill in the Bollywood industry.

Rishi Kapoor was born on 4 September 1952, in Bombay, Maharashtra, India in a Punjabi family. His full name is Rishi Raj Kapoor. Likewise, his father’s name was Raj Kapoor, an actor-director, and his mother’s name was Krishna Raj Kapoor. He was the second child of the family.

Similarly, his grandfather’s name was Prithviraj Kapoor. He had four siblings; two brothers named Randhir Kapoor and Rajiv Kapoor who were both actors. And he had two sisters, insurance agent Ritu Nanda and late Rima Jain. Likewise, his paternal uncles, Shashi Kapoor and Shammi Kapoor, and maternal uncles, Prem Nath, Rajendra Nath, Narendra Nath, and Prem Chopra, were all actors. 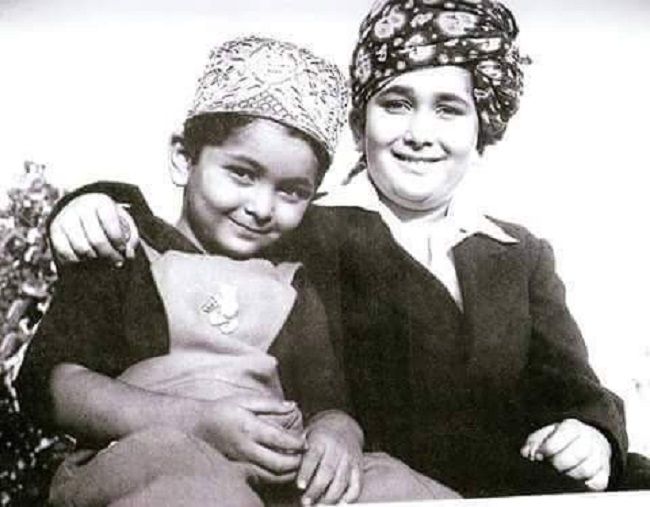 Being grown up in a family engaged in the entertainment industry, he had a keen interest in acting from a very young age. He also made his first on-screen appearance at around age three, in Raj Kapoor’s Shree 420.

Moving toward his educational background, he did his schooling with his brothers at Campion School, Mumbai, and Mayo College, Ajmer.

Rishi Kapoor was diagnosed with bone marrow cancer in 2018. He went to New York City for the treatment. After his successful medication for over a year, Kapoor returned back to India on 26 September 2019.

Recently he was admitted to Sir H. N. Reliance Foundation Hospital in Mumbai on 29 April 2020, due to breathing difficulty. Unfortunately, he left the world from complications of bone marrow cancer with shocking news for his fans on 30 April 2020 at the age of 67.

His last rituals were performed at Chandanwadi Crematorium and his ashes were immersed in Banganga.

Talking about Rishi Kapoor’s acting career, he debuted in the entertainment industry at the age of three with the appearance in a movie in his father’s film Shree 420.

In 1970, he made his debut in the film ‘Mera Naam Joker’ from his father Raj Kapoor. In the film, he plays the childhood role of his own father. His father desired to make a teenage love story and did not have enough money to cast Rajesh Khanna in the film. So, he was cast in the film. “In 1973, he played the first lead role opposite Dimple Kapadia in the film ‘Bobby.’ After the release of the film, he became an instant hit among youngsters.

From 1974-1981, he starred with his future wife Neetu Kapoor, but the duo didn’t perform much as expected. His film alongside with Neetu Kapoor was only hit in multi-starter films including Amar Akbar Anthony, Pati Patni Aur Woh, Khel Khel Mein, Kabhie Kabhie, Duniya Meri Jeb Mein. His other movie in a lead role with Neetu Kapoor was a flop– Anjane Mein, Jhoota Kahin Ka, Zehreela Insaan, Zinda Dil, Doosara Aadmi, Dhan Daulat.

In the 90s, he made his appearance in the film like Deewana, Damini, and Eena Meena Dika were successful. Likewise, his lead role films were Hum Kisi Se Kum Nahin, Badalte Roshtey, Aap Ke Deewane, Saagar then in the ’90s with Chandni, Deewana(1992), Damini(1993) and Gurudev (1994). In 1999, he directed the film ‘Aa Ab Laut Chalen’.

In 2000, he appeared in the romantic lead in the film ‘Karobaar: The Business of Love’ which was a flop. After his several box office flops as the lead role, he started performing as supporting roles in the 2000s.

In 2010, he reunited onscreen with Neetu Singh in the film Do Dooni Chaar. He acted in the movie Chintu Ji in which he played himself. In 2012, he made his appearance in a villainous role in Agneepath and in the multi-starer Housefull 2. In Housefull 2, he appeared with brother Randhir Kapoor for the first time after ‘Khazana’ in the mid-1980s. He even performed a cameo role in Yash Chopra’s Jab Tak Hai Jaan along with his wife.

In 2018, he starred in 102 Not Out, a comedy-drama film directed by Umesh Shukla. Also, in this film, he reunited with Amitabh Bachchan together again after 27 years. 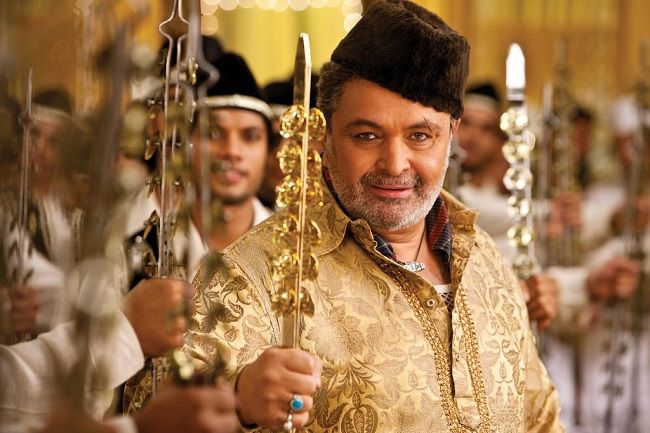 Caption: Rishi Kapoor in the character of Rauf Lala in the film Agneepath (Source: Flickr)

Legendary actor of Rishi Kapoor had achieved several awards through his tremendous career in the Bollywood industry. Throughout his career, he has received thirteen awards. For the first time, in 1970, hr received his first-ever award from Bengal Film Journalists’ Association Awards for Mera Naam Joker.

Being a super popular Bollywood star, he certainly had a huge influence over the Indian audience. He also did brand endorsements as well. Likewise, before his death, he had endorsed brands such as Pepsi and Kabzend.

Through Rishi Kapoor’s contribution to the entertainment industry, he had an annual income of Rs. 20 crore (INR), which translates to around $3.7 million. Apart from his earnings, his properties and assets, amongst which are numerous luxury cars, are estimated at around $9.7 million. 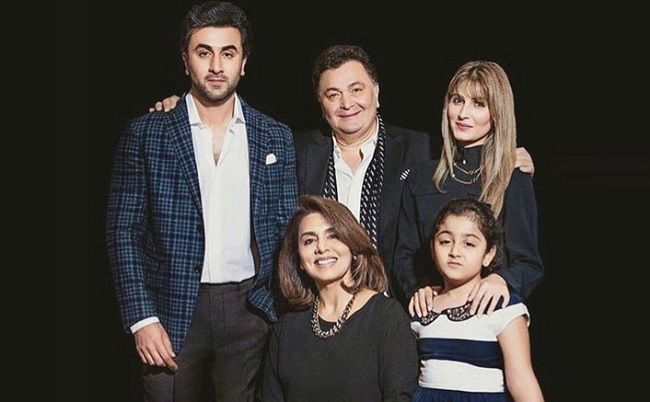 Caption: Rishi Kapoor posing with his family for a picture (Source: Koimoi)

Previously, he had dated an actress Yasmin in his teenage days and broke up with her. As an adult, he fell in love with his co-actress Neetu Singh during the shoot of ‘Bobby’ and had even dated her alongside other actresses. Moreover, he had also dated actress Dimple Kapadia but after his father’s rejection ended his relationship with her.

Rishi Kapoor had been actively presenting himself on social media handles Twitter with his thoughts. His last tweet was “An appeal ? to all brothers and sisters from all social status and faiths. Please don’t resort to violence,stone-throwing, or lynching. Doctors, Nurses, Medics, Policemen, etc..are endangering their lives to save you. We have to win this Coronavirus war together. Please. Jai Hind!??” on April 2, 2020. He has 3.5 million followers on the account.