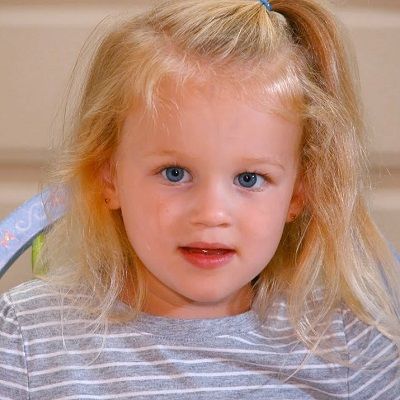 Riley Busby is recognized as the fourth quintuplet of the Busby featured on TLC’s reality show Outdaughtered. Riley Busby along with her family are famous on social media with their blog It’s A Buzz World.

Riley Busby is 6 years old. She was born on April 8, 2015, in Houston, Texas under the astrological sign Aries. Likewise, she is one-fifth of the Busby quintuplets born to Adam Busby and Danielle Busby. Her full name is Riley Paige Busby. His father left his job as a Key Account Manager at Intrinsic Solutions and Sprint Safety. And now he is the owner of Adam Busby Media. This media concentrates on photo and video projects from large brands to priceless memories for family events. 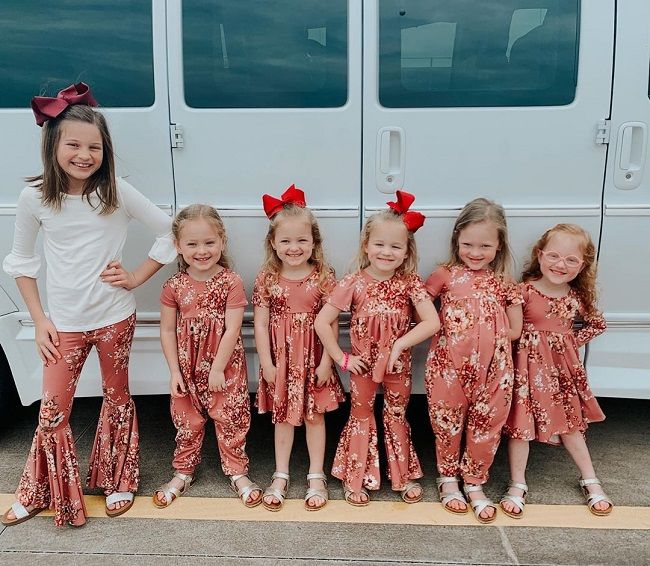 Caption: Riley Busby posing along with her siblings (Source: Instagram)

Her other quint name is Ava Lane, Olivia Marie, Hazel Grace, and Parker Kate. Likewise, she is the triplet sister of Hazel, and Parker and her sisters Ava Lane and Olivia Marie are identical twins. Similarly, she also has an elder sister named Blayke Busby. Her sister Blake is four years older than the quintuplets.

Likewise, talking about her nationality, she holds an American nationality.

Danielle Busby, her mother had quite a tough day on April 8, 2015. When she gave birth to her five quint daughters through C-section, she was just 28 weeks pregnant as noted by Country Living. She along with her four sisters was very tiny. So, they had to stay in the neonatal intensive care unit, or NICU, for about three months. Besides, the cameras were capturing the birth process of five kids. Danielle gave birth to her five daughters, and Riley Paige was the fourth one to be born. It was noted by the TLC website.

According to It’s a Buzz World blog, Riley Paige was born with a weight of around 2 pounds, 4 ounces, and she was just 14.2 inches long. Even though she and all her four sisters were small when they were born, her birth was super quick.

Concerning the blog, the quints “were out and off to the stabilization area within 4 minutes!.” She has grown up a lot since then. Though she was once just a little human, and that’s pretty incredible.

Moving toward Riley Busby’s education, she is maybe studying in KinderGarten. In 2019, she entered kindergarten a year before the other quints. In one of video clip, it reveals just how much she’s flourishing in her new class. She loves to go to school and every morning she seems excited about getting ready for school.

She skipped preschool and went to kindergarten. Regarding her one year of early education than her siblings, many people criticized this decision for splitting up the quints by letting one of them skip a grade.

Her parents Danielle and Adam yet not sure if they will be transferring her to first grade next year. They challenged her by sending her to kindergarten early, but there is still a chance that she won’t endure a grade level ahead of the other quints for the rest of their academic careers. However, her parents might still decide to have the repeat kindergarten with her sisters next year.

Academically speaking, Riley Busby is the smartest among the quints. Each of the quints was tested for their intelligence at their preschool. While the average child scored 40 on the test, she scored 84.

Outdaughtered Riley Busby ended up skipping pre-K and going straight to kindergarten due to her outstanding result on her placement test. Though her parents felt quite uneasy to handle being the smartest.

How is Riley Busby’s behavior? Is she a naughty girl?

OutDaughtered’s Riley Busby likes to get attention from everyone and is an attention seeker. According to her mother, she may be smart but, she still lives her entire life to get attention. Similarly, on the quints’ second birthday, her mother wrote a little paragraph on her It’s a Buzz World blog about each quint. In the blog, she wrote there is one thing she absolutely couldn’t leave out is attention and she is a social butterfly.

Additionally, on an episode of OutDaughtered, she is mostly seen doing stuff when it comes to getting attention. Her parents also stated she is the worst out of all the quints. Clearly, they said that “She’s so smart, she’s so cute, and she does it for attention mostly.”

In an episode of OutDaughtered, her parents explained how each quint’s characteristics had started to shine through. However, when it comes to describing her, there was a pause. After that her father Adam said, she just loves to antagonize and she will take toys away, she picks on the other girls.

Even though Riley Busby might have taken after her mother when she was a newborn. The youngster grew quickly after her dad in plenty of ways. She is absolutely a daddy’s girl, and she loves to get every and all the attention of dad.

According to the blog post celebrating the quint’s first birthday on the It’s a Buzz World blog, she was described as “Riley is obsessed with Adam.” She is the Daddy’s girl out of the bunch and will pitch a F.I.T if her father comes home and doesn’t tell her hi before the other babies. 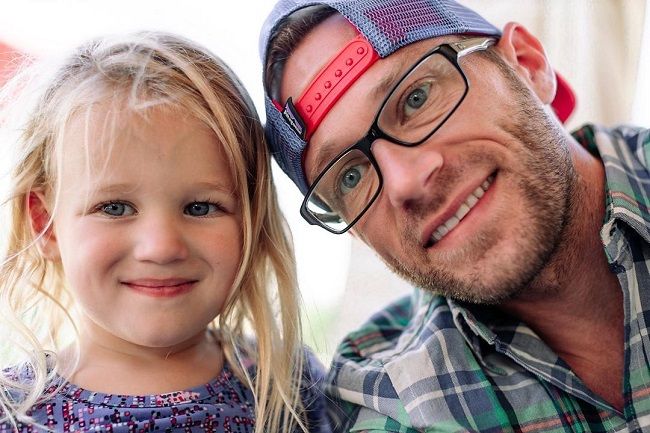 Caption: Riley Busby posing for a selfie with her father (Source: Instagram)

OutDaughtered star she tests her parent’s patience. Besides all her bold behavior, smarts, and neverending desire for attention, she tests her parent’s patience now and again. She has taught her parents a whole new meaning for the word “tolerance.” Specifically, in a 2018 Mother’s Day blog post for her It’s a Buzz World website, she stated how she was continuously pushing borderline, but her mother, of course, loves her anyway.

A bit of tattletale and Honest

OutDaughtered star Riley Busby is a capable and responsible kid among the quints, but she is also a bit of a tattletale.

Though she is pretty responsible, she is not always in the best way. According to her mother, she is honest to a fault and always ends up being the first to tell on her sisters. She loves to tattle tell, even when it’s her fault, and again instantly passes all the blame to someone else. However, when someone does something wrong, she is first to tell her parents.

Even she is not only well behaved but also honest. Surely, she might get in trouble, blame her sisters, and make messes, but at her very core, she is very honest.

Since a baby, she was the rowdy one. According to the It’s a Buzz World blog post when the quints were only five weeks old, her mother wrote about how little, baby Riley was acting up already. She is also quite stubborn.

OutDaughtered star Riley Paige Busby is pretty sassy. Likewise, she is a little drama queen and also knows how to manipulate everyone around her to get what she wants.

She is the crankiest and mean one of the girls and always disagrees with Olivia. She and her sister parker have a special bond and are always close to each other. They helped each other out.

Since Riley Busby’s early days before turning one along with her Quintuplets, she got featured in her reality show Outdaughtered. Likewise, she is a reality star as well as a social media star.

One of the most popular uploads of the channel is “Priceless reaction to daddy blowing the candles out” with over 19 million views. Some of the other notable videos are “Results of a long car ride,” “Telling the Quints Apart,” “Reaction to Daddy Blowing out the Candles 1 Year Later,” “Busby Valentines Day,” “The quints refuse to say, Mama,” and more.

Being a part of the OutDaughtered family, she along with the Busby family has an estimated net worth of around $4.5 million. She is living a lavish and healthy lifestyle with her family. The OutDaughtered reality families make about $250,000 – $400,000 per OutDaughtered episode.

Her parents got married on July 22, 2006, in an intimate ceremony in their hometown.

Pretty-looking Riley Busby has a pair of attractive big bright blue eyes. She has the smallest head and face. Likewise, she has blonde hair color. 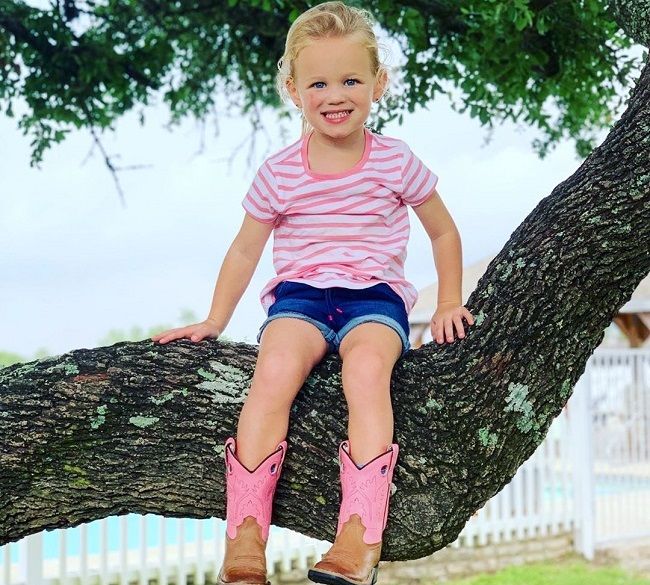 Caption: Riley Busby posting for a photo sitting on the branch of the tree (Source: Instagram)

Growing up in the social media world, she has always been in limelight on overall social media handles being a Quint daughter. But she does not have her own social media account and is just 5-year-old kid.