Richard Wershe Jr. was born on July 18, 1969, in Michigan ad is currently 52 years old. His father’s name is Richard Wershe Sr. and his mother’s name is Darlene McCormick. He also has an older sister named Dawn. Richard belonged to a lower-middle-class family. When he was only 5, his parents decided to separate. Therefore, he and his sister chose to live with their father. They lived in a small brick house on Hampshire Street at Dickerson Avenue.

Later, when he turned 12, he briefly stayed with his mother. Moreover, his mother was remarried. And, he did not like his stepfather a lot. After a year, he moved back to his father. Therefore, he attended the local school. But, in 1985 he abandoned his education.

Richard Wershe Jr. was involved in a crime through a criminal named Terrence Bell. He was in a relationship with her sister. Both of the children of Wersher Sr. were in the way of crime. Dawn was doing crack cocaine. Moreover, Wershe Jr. accompanied by Bell. The Curry brothers controlled the drug operations. Thus, He first became acquainted with Rudell ‘Boo’ Curry. He is the younger brother of Leo and Jhonny. Therefore, Richard also enjoyed the lavish lifestyle. 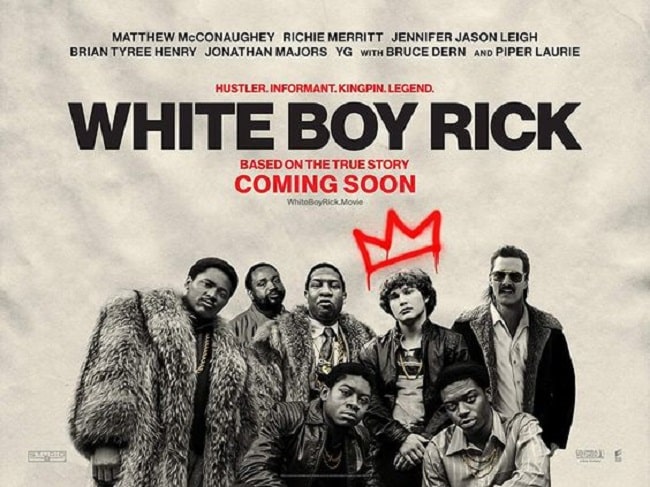 Later in the 1980s witnessed America war on drugs combating a new enemy, crack cocaine. Moreover, Wershe Sr. contacted the FBI to save his children. In 1984, the FBI came to their house and started showing pictures of the Curry brothers. While Wershe Jr. recognized but his father did not. Additionally, Richard became an informant for the FBI. At that time he was only 14 years old.

Richard Wershe Jr. was paid for his worked and money became flowing. He was making more money and he was enjoying it. His connection with the Curry family helped to collect the pieces of information. He knew the drug activist in his neighborhood and the city at large. At that time Johnny was one of the most powerful drug lords. Although he was young he proved invaluable to the FBI. Frequently, he spends time with the brothers and gathers information. They did not suspect a thing.

Career as an FBI informant

When Richard turned 15, he was spending nights at the clubs and skipped school. Moreover, he was gathering information for the FBI. Through him, the FBI cracked down on the drug dealers. And, also seized hundreds of millions of dollars, weapons, and cocaine. According to FBI Richard was the most productive informant for the agency.

Later, Richard was shot in the stomach by one of Johnny’s associates. Therefore, called an ambulance by pleading to the man. Soon, he recovered and appeared to the Curry brothers. He did not reveal anything to the authorities. Moreover, it garnered him street cred in their eyes. Later, he grew even closer to them. After the incident, he did not work with the FBI again. He was still meeting with the FBI but never revealed the information.

In April 1985, Richard received a fake Id and $15,ooo from the FBI. So that he could continue the job as an informant. Later, the FBI arrested the Curry brothers and many of their associates. Therefore, the case was built against them as information provided.

After the Curry brothers were arrested FBI did not need Richard. He has an option to go back to school or hit the streets. Later, he chose to become a drug dealer. Additionally, Richard brought cocaine from a Miami-based supplier named Art Derrick. In May 1987, he was arrested and charged for having 8 kilos of cocaine. Then, he was sentenced to life imprisonment. The case was revisited, in 1998. Aditionally, Richard was granted the chance of parole.

Moreover, Richard continued to help the FBI. He played the role in Operation Backbone. Due to him, the FBI was successful to arrest several corrupt Detroit police officers. Later, he was again sentenced for involvement in a car theft ring. Mow, he is the reception and Medical Center state prison.

Richard Wershe Jr. has worked as an informant for the FBI and earned a huge amount of money. Moreover, becoming a drug dealer too he has enjoyed a lavish life. Therefore, Richard’s estimated net worth is not revealed yet. In between his life he has surely lived a lavish life.

Richard Wershe Jr. has an affair with Johnny’s wife, Cathy Volcan. According, to the sources he has not been in any relation after. And, Richard is unmarried and single not. He probably is enjoying his singlehood.

Richard Wershe Jr. is not a social media personality. He got the attention after a film on his life was realized. Therefore, there are no rumors that have been raised about him. And, Richard has not been stocked in any controversies.

Richard Wershe Jr. is very tall and huge in size. Richard stands 6 feet 2 inches (188 cm) tall. And, he weighs around 79 kg (174 lbs). He has blue color eyes and blonde hair color. But, he is mostly seen bald. Therefore, other information about Richard’s body measurement is not revealed.

Richard Wershe Jr. has spend half of his life in prison. Moreover, Richard is not active in any social media accounts. Therefore, now he preferred to make his life better than being active in social media.