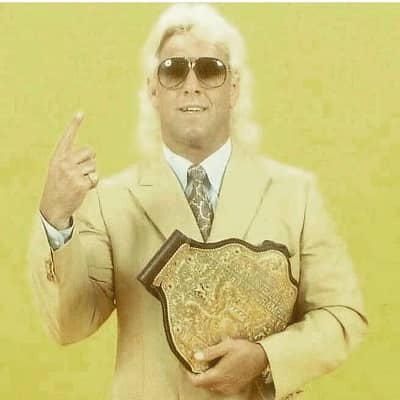 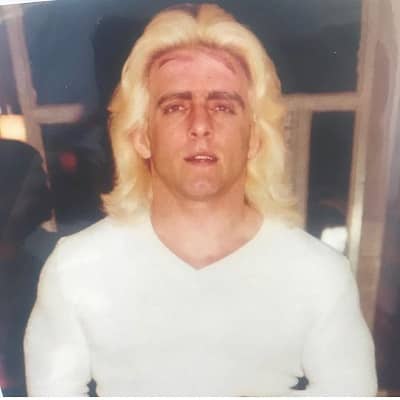 Ric Flair is an American professional wrestling manager. Also, Ric Flair is famously known as ‘The Nature Boy’ in WWE. Not only this, he is a popular well-known ex- American Professional Wrestler.

The birthname of the wrestling manager is Ric Morgan Fliehr. He was born on February 25, 1949. Similarly, his birthplace is in Memphis, Tennessee, the USA. And, his parents’ names are Luther Philips and Olive Philips. Likewise, his astrological sign I Pisces. As for now, he is 71 years old.

Earlier, his name was considered to be Fred Philips. Tic. Later on, was adopted by Richard Reid Fliehr. Moreover, the name of his adopted mother, Kathleen Kisnmiller Fliehr. Similarly, his adopted father was completing a residency in obstetrics and gynecology in Detroit, Michigan. On the other hand, Ric’s adopted mother was working at the Star Tribune. Into the bargain, his nationality is American. Nevertheless, his ethnicity is unknown.

After his adoption, he moved to Edina, Minnesota with his new family. Then, he joined Wayland Academy for his high school studies. During his school days, he used to be an active sportsman. He was fond of playing football, track, and wrestling.

Wayland Academy is one of the private, coeducational college preparatory boarding high schools. It is located in Beaver Dam, Wisconsin, United States. After completing his freshman year, he dropped out of college. Surprisingly, he became an amateur wrestler before enrolling with the University of Minnesota on a football scholarship.

Initially, when he worked as a bouncer at a club, he met Olympic weightlifter, Ken Patera. And then, Ken Patera introduced him to American Wrestling Association (AWA) promoted, Verne Gagne. Fortunately, Gagne decided to register Flair’s name as a member of his training class.

In the year 1971, Richard joined Gagne’s wrestling camp that was set-up at Gagne’s barn outside Minneapolis. His first match was against George “Scrap Iron” by taking up the ring name ‘Ric Flair’ in 1972. After two years, he quit AWA and then joined the National Wrestling Alliance (NWA) in 1974.

After recovering from the accident mentioned below, he wrestled Wahoo McDaniel in 1976. He wrestled against the original ‘Nature Boy’ Buddy Rodgers in 1978. Also, Flair along with the tag team of Ole Anderson and Arn Anderson launches attacks against Rhodes in early 1985. 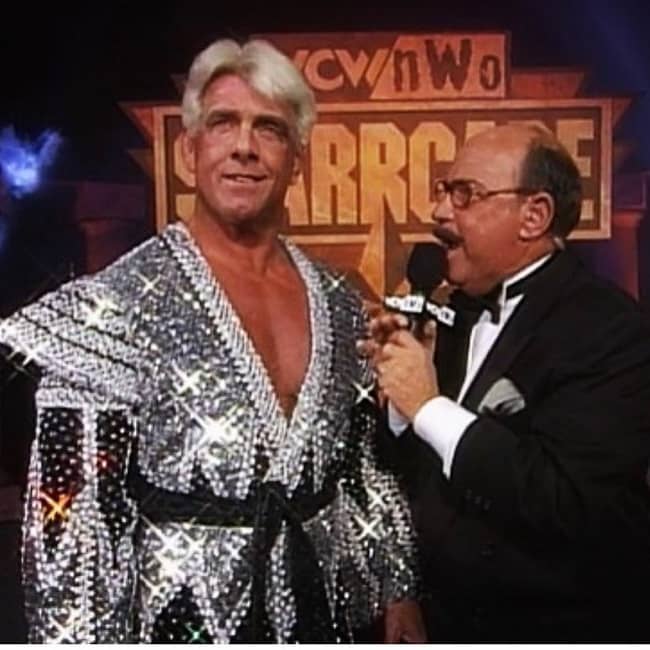 During the year, 1991, Herd fired Ric and strip him of the NCW Championship. In the same year, he then joined WWF (World Wrestling Federation).

The talented wrestler returned to WWF in 2001 after taking a break for a short time. Flair then joined ‘Evolution’ in 2003. Ultimately, Ric was retired from wrestling in 2008 after losing a match to Shawn Micheals. But, he occasionally appears in WWE to support his daughter Ashley.

On October 4, 1975, Ric boarded a plane with Johnny Valentine “Mr. Wresting I” Tim Woods Bob Bruggers, and promoter David Crockett. Sadly, the plane was crashed in Wilmington, North Carolina. Because of this, he had to suffer a back injury. Woefully, he was told that he would not be able to wrestle ever again.

Amazingly, he did not think of giving up and underwent a lot of physical therapy for being able to get back on his feet. Also, he could be back on the wrestling ring within a year of the accident.

Ric Flair is the flag bearer of the World Order’ in 1996. Further, he is the winner of the WCW World Championship twice during 2000. The two years, 2003 and 2004 gave the wrestler achievements by winning World Tag Team. Astonishingly, he is the only two-time inductee of the WWE ‘Hall of Fame’.

Based on some sources of information, the net worth of the retired wrestler is approximately $3 million. On average, he can earn more or less $500k. As a professional wrestling manager, his income is $92k.

But, his other information such as yearly salary, monthly salary, personal belongings, and other personal endorsements are not known.

Currently, Ric Flair is married to Wendy Barlow. She is a Canadian tennis player. They tied the knot on 12 September 2018. The wedding ceremony was held at Pearl Hotel in Florida. 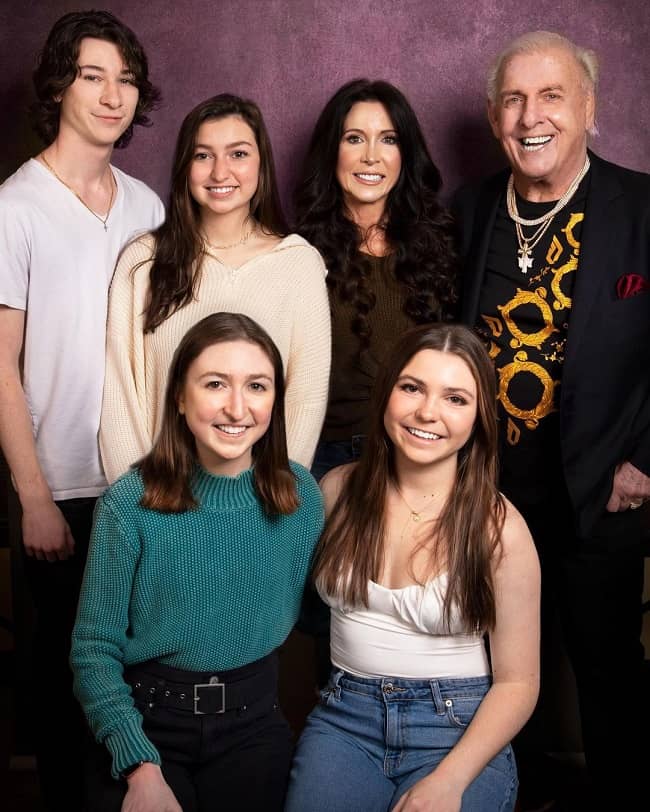 Previously, he was married to Jackie Beems. They were together forgiving years that is from 2009 to 2014. Earlier, he had a wife, Tiffany VanDemark from 2006 to 2009. From 1983 50 2013, he was in a married relationship with Elizabeth lair. They share two children, Charlotte and Reid.

His very first wife’s name is Ledlie Goodman. They had married in 1971 and share one son and a daughter. They are David and Megan.

The wrestler has been involved in a few controversies, An arrest warrant was issued against him in December 2005. AT that time, he was involved in road rage.

Secondly, his former employer had sued Flair accusing that he won the company approximately $40k in 2007. Moreover, the company also claimed that he had disobeyed the contract by not appearing in the events as per the contract.

Talking about the wrestler’s body measurement, he is 6 feet and an inch tall. Likewise, his weight is around 110 kg. His eyes are hazel in color and light-colored hair. Unfortunately, his shoe and dress size are unknown. 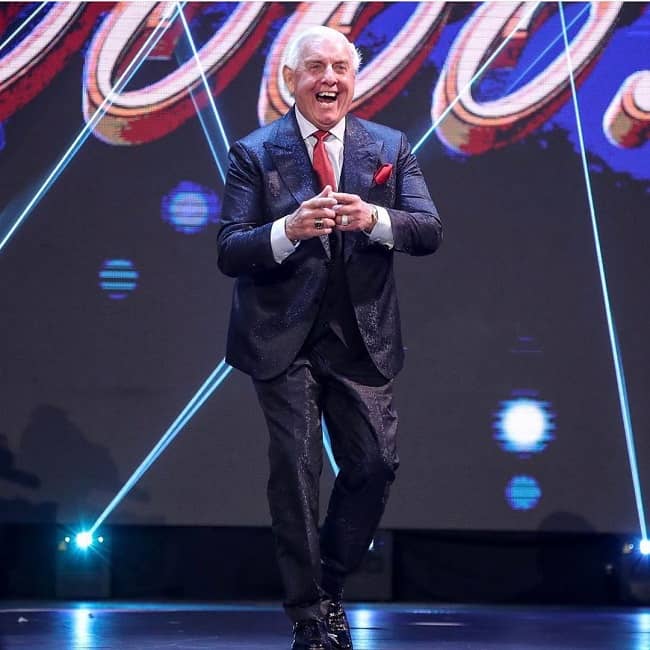