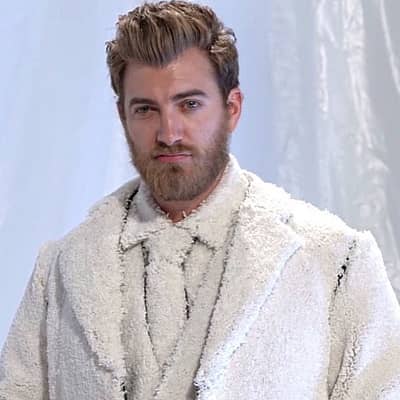 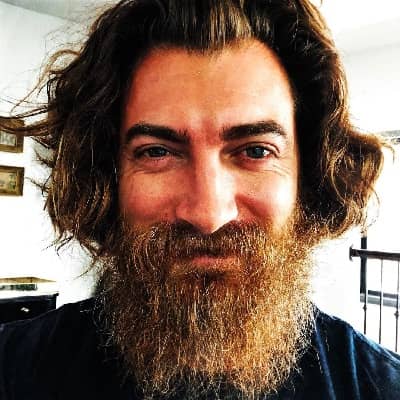 Rhett McLaughlin is an American social media personality as well as YouTuber. Rhett McLaughlin is a part of the internet sensation comedy duo known as Rhett and Link alongside Charles Neal III. They became popular and also got recognition by USA Today, LA Weekly, Business Insider, and Wired.

Rhett McLaughlin is 44 years old. He was born on October 11, 1977, in Macon, Georgia. He lived there until around the age of three. Then his family moved to Thousand Oaks California until the age of 5. His father’s name is Jim McLaughlin, and his mother’s name is Diane McLaughlin. Likewise, he also has an elder brother named Cole McLaughlin.

In 1984, his family moved to Buies Creek, North Carolina, where his dad became a law professor at Campbell University. His astrological sign is Libra. Talking about his educational background he studied engineering at North Carolina State University. 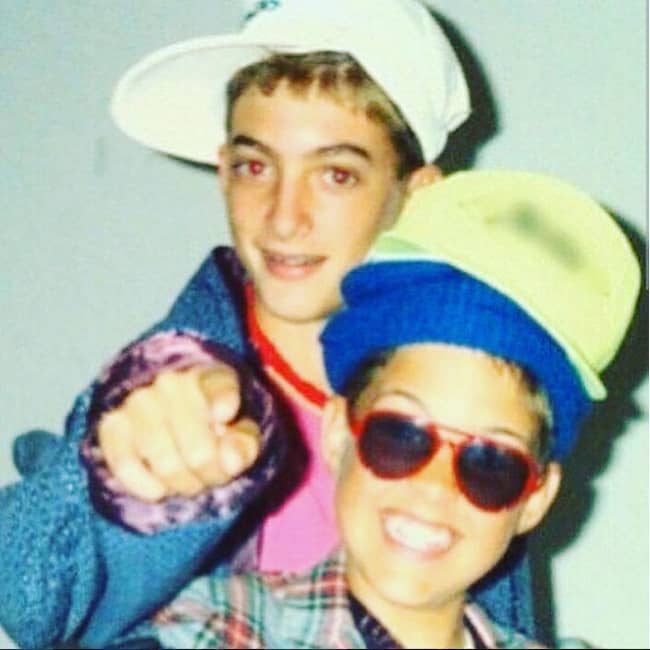 Caption: Rhett McLaughlin on his childhood photo with Link(Source: Instagram)

Professionally, Rhett Mclaughlin is a famous social media personality. He took notable steps in the social media field creating a YouTube channel named “Rhett & Link” on June 5, 2006. He along with his best friend Charles Lincoln Neal collaboratively launched the channel. Afterward, he along with his friend started uploading funny music videos, sketches, and ridiculous local commercials into their channel.

In 1984, he first met his childhood friend and future professional partner Charles Lincoln “Link” Neal III. They grew together as young men and they co-created a documentary called ‘Looking for Ms. Locklear’ in 2008. Then they shared a YouTube Channel ‘Rhett and Link’ and began hosting what ultimately became one of the most-watched talk shows on the internet, called ‘Good Mythical Morning’ in 2012.

He and Link began calling themselves ‘INTERNETAINERS’ – entertainers on the internet after achieving success in this venture, They started gaining decent followers and love for their funny music videos, sketches, and hilarious local commercials. He even has other channels including ‘Good Mythical More’ and a weekly podcast channel called ‘Ear Biscuits’.

Apart from that, they enjoyed massive success as YouTubers. He also runs a website called rhettandlink.com which has music, merchandise, and other items. He alongside link has appeared as a singing duo known as ‘The Fabulous Bentley Brothers’ on the kid’s show ‘Jelly Telly’, apart from making multiple appearances on the ‘Epic Rap Battles’ show. They have also appeared on WWE Network’s series ‘Legends House.’

Gradually, they started sharing a large number of viewers and get liked their videos. Today, their channel “Rhett & Link” has gained more than 4.96 million subscribers. Likewise, they have even created their other channels; “Good Mythical Morning”, “Good Mythical More”, and “This is Mythical” which have approximately more than 16.6 million, 3.95 million, and 1.45 million subscribers respectively.

Good Mythical Morning is a talk show airing on weekdays at 6:00 am EST and the channel Good Mythical MORE airs directly after Good Mythical Morning and is described as the “show after the show”. Likewise, their fourth channel, entitled “Mythical Kitchen” (formerly This is Mythical, as well as Mythical), showcases bonus and behind-the-scenes videos. But they have most recently been used for videos produced by and starring their crew. 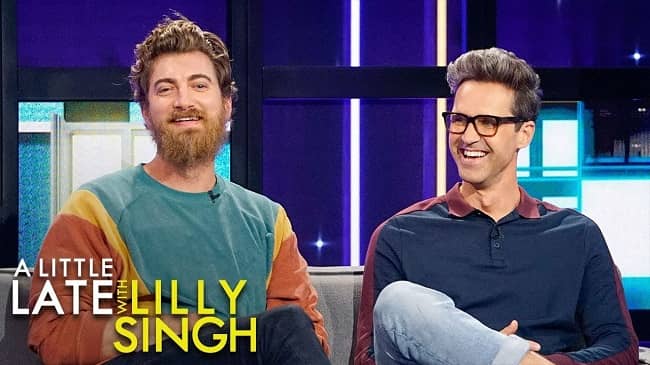 Rhett McLaughlin has won several accolades for his collaboration with Link. They are well-known for their high-quality content production. Their ‘Good Mythical Morning’ show is one of the most-viewed daily online shows with an average of 100 million viewers per month. Over the years the duo has won several awards including Streamy Award for the Best Comedy Show for ‘Good Mythical Morning’ in 2016. Likewise, he has been a fundamental part of the entertainment community since 2008.

Moreover, he has also appeared on various television shows like ‘The Tonight Show with Jimmy Fallon,’ ‘Last Call with Carson Daly,’ ‘The Tonight Show with Jay Leno,’ and ‘Conan.’ His work got recognition by the magazines ‘LA Weekly,’ ‘Wired,’ and ‘Business Insider.’ In 2009 they were ranked No. 22 on the Business Insider’s ‘Top 25 Most Creative People in Advertising’ list. In 2014, their channel ‘Rhett and Link’ ranked 35 on New Media Rockstars’ top 100 channels.

Furthermore, they are also famous for their creative brand promotions for top companies like Amazon, Amazon Echo, Gillette, Axe, Clearasil, Airheads, Hot Pockets Nesquick, Purina, and Toyota among others. In 2008, the duo worked as web reporters at the Sundance Film Festival for IGotShotgun.com in partnership with Cadillac.

Rhett McLaughlin is an American YouTube personality, comedian, and actor who has earned a decent sum of money throughout his career. Thus his estimated net worth is around $16 million. He is for sure enjoying good fortune.

Reflecting on his relationship status, the talented American YouTube star, Rhett Mclaughlin is a married man. He married Jessie Lane on 29 March 2001. Likewise, he is also the father of two children, both sons, namely Locke McLaughlin and Shepherd McLaughlin. They have also adopted a Maltipoo pup, Lola, from Wylder’s Holistic Pet Center and Rescue in Studio City, CA. His wife appreciates peace and privacy and has thus consciously chosen to not appear on her husband’s social media platforms frequently.

Talking about his past relationships, there is no further information about the past love affairs of Mclaughlin in which he was actively involved. Thus, this social media personality is currently married to Jessie Lane and is making love with her profession as well at present.

Likewise, he suffered from severe back problems due to multiple ruptured discs in his back at a point in his life. He also does stretching exercises to help his back and claims that this has enhanced his condition dramatically. He even suffered from psoriasis and seizure as a child, a trait that his sons have received. 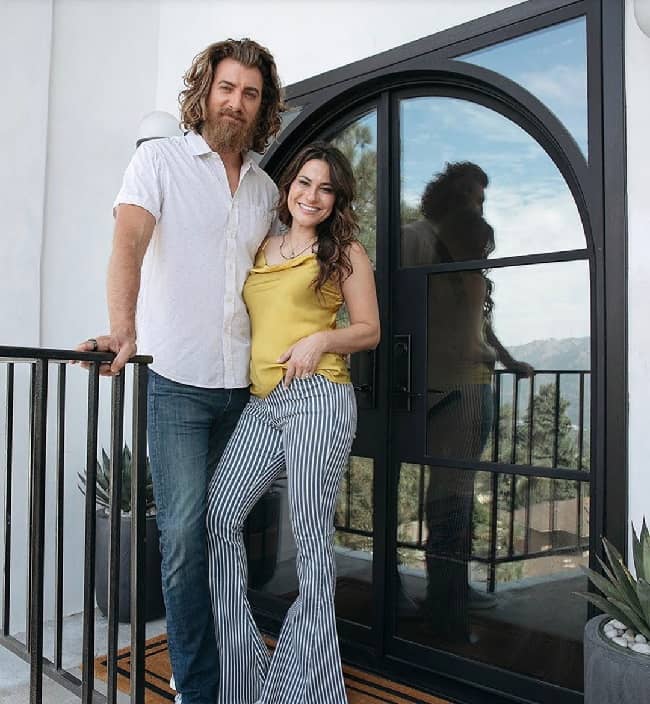 Cation: Rhett McLaughlin posing for a photo with his wife (Source: Instagram)

Rhett McLaughlin stands at a height of 6 feet 7 inches. He has a bodyweight of 80kg. Likewise, he has light brown hair color and greenish-blue eyes.