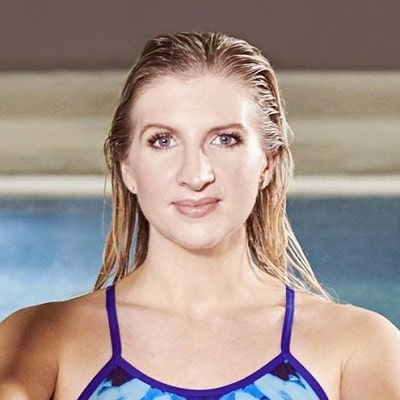 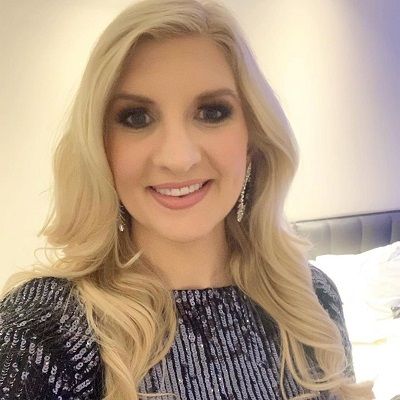 Rebecca Adlington is a British competitive swimmer who is now retired. Rebecca Adlington participated in several events like the 2008 and 2012 Summer Olympics, Commonwealth Games, World Aquatics Championships, and European Swimming Championship among others. She is now a swim trainer.

Rebecca Adlington was born on 17 February 1989 and currently, her age is 33 years old. Likewise, her zodiac is Aquarius. She is originally from Mansfield, Nottinghamshire, England, and hence, her nationality is British. Moreover, her parents are father Steve Adlington and mother Kay Adlington. Also, she has two sisters namely Laura Adlington and Chloe Adlington. Furthermore, former Derby County goalkeeper Terry Adlington is Adlington’s great-uncle. She is also a keen Derby supporter. In England and the US, Terry was a successful goalie during his time.

One of her sisters, Laura suffered from encephalitis, an inflammation in the brain, which inspired Rebecca to do better. She stated in 2012 that the suffering of her sister made her more determined and makes her train harder.  The incident happened in 2005 and over time, Laura recovered from it. As an impact of this incidence, Rebecca became an Ambassador of the Encephalitis Society in the year 2009 and helped raise awareness about the illness, i.e. encephalitis. 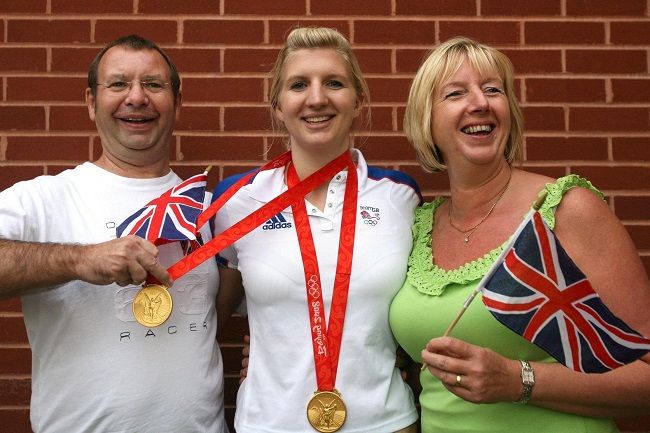 Talking about her educational journey, Rebecca started with Brunts School, which is now known as Brunts Academy since 2012. Later, she joined Sherwood Colliery Swimming Club and started swimming with them. She was selected for Nottinghamshire County Elite Squad (Nova Centurion Swimming Club). Representing this club, she swam in local swimming leagues and also took part in the National Speedo ‘B’ Final in May 2010. Further, she learned to swim at the age of 3 and started competing at age 9.

Talking about her career, Rebecca is a professional swimmer who represented team Britain at the 2008 and 2012 Olympic Games. During the 2008 Summer Olympics, she competed in the 400-meter and 800-meter freestyle events. Further, Rebecca was also scheduled to compete at the 4×200-metre freestyle relay however she was rested in the heat and her team failed to qualify for the final.

Moreover, Rebecca broke the Commonwealth record with a time of 4:02.24 in the heats of the 400-meter freestyle. With a time of 4:03.22, she also bagged an Olympic gold medal in the same event and the exact date is 11 August 2008. She won by beating Katie Hoff from the U.S. in the last 20 meters.

Rebecca became the first woman to win a gold for team Britain in swimming in the recent decade. Prior to her, Anita Lonsbrough was the only one to do so in the year 1960. Further, Rebecca also became the first British woman swimmer to win more than one gold medal at one Olympic Games in the recent decade. Before her, the only one to do so was Henry Taylor who won three golds in the year 1908.

Moreover, Rebecca won gold in the 800-meter freestyle at the 2011 World Aquatics Championships. She won over Lotte Friis in the last 50 meters. Likewise, she also won a silver in the 400pmeter freestyle and the gold medalist in this event was world record-holder Federica Pellegrini from Italy. Further, Rebecca also won two bronze medals during the 2012 Summer Olympics in London. The events were 400-meter and 800-meter freestyles. Rebecca announced that she would stop 800-meter events and altogether not participate in the Rio games. Later, she retired in February 2013.

Swimmer Rebecca has appeared on several television shows. She was a guest panelist on Loose Women, the ITV lunchtime chat show. The episodes she appeared aired on 25 March, 17 April, and 22 May 2014. Further, she was also a contestant in The Jump Series 3. However, she discontinued the show on 7th February 2016 as she dislocated her shoulder during the training.

Rebecca also became a part of the BBC presenting team for the swimming events at the 2016 Summer Olympics in Rio. She worked alongside Helen Skelton and Mark Foster for this. Likewise, she continued this role at the 2017 World Aquatics Championships and 2018 European Championships among others.

Furthermore, Rebecca also appeared on I’m a Celebrity…Get Me Out of Here! in its 13th series. The airing date was from 17 November 2013 onwards and it was held in Australia. Similarly, she finished in #6 after the public voted her out on 6 December 2013.

Rebecca has participated in several variety shows as a contestant. Some of such shows are MasterChef, All Star Family Fortunes, Come Dine with Me, Who Wants to Be a Millionaire? (with Kian Egan), and The Chase. Furthermore, Rebecca already created 2 Swimwear ranges with Slazenger and they are currently developing the third one. She is also an ambassador for the Encephalitis Society and a Patron of Women in Sports charities.

What’s Rebecca up to at present?

Despite her retirement, Rebecca is committed to swimming as strongly as she ever was! After nearly 3 years of planning, her program, “SwimStars Programme” is up and running at present. She started this project with the vision to make every child in British capable of swimming 25-meters by the time they leave primary school. She also aims to expand this program further across the UK.

Likewise, she also joined hands with Alan Rapley and Linda Freeman for Learn to Swim program development and delivery. They are well respected and experienced Swim England trainers, with the knowledge and experience required for the role. They plan to train people and build a career in aquatics and hence bring changes in people’s lives.

Rebecca has achieved so much during her tenure as a competitive swimmer. She also set records for her country in several games. More than her personal achievements during games and events, Rebecca has also received honors in her society. More precisely, the Sherwood Swimming Baths in Mansfield renamed Rebecca Adlington Swimming Centre when it reopened after renovation in January 2010. Likewise, they renamed Yates Bar in Mansfield as Adlington Arms in her honor but it soon changed to its original name. 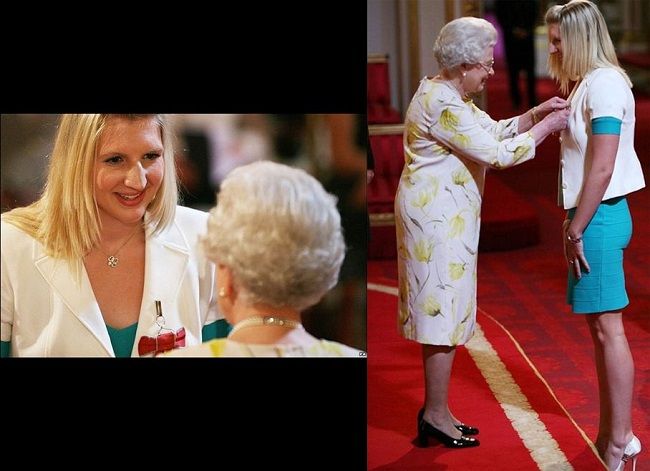 Caption: Rebecca Adlington receiving the OBE directly from her Majesty Queen for her contribution in British Sports. Source: BBC and Express Co UK

Furthermore, Rebecca received the trophy for the title Sports Journalists’ Association’s Sportswoman of the Year. She received it at a ceremony held in the City of London, where Princess Royal presented the award herself as she is a former winner of that award.

Later in 2009, Rebecca was appointed Officer of the Order of the British Empire (OBE) in the Queen’s Near Year Honors list. Also, she received a degree in Master of Arts from the University of Nottingham recognizing her outstanding contribution to British sports. She received the degree in December 2009.

Moving on, she is also famous for her brand endorsement jobs. She has endorsed of promoted popular brands like Amishi London, Aspinal of London, BMW, Boodles, British Gas, etc.

Furthermore, Rebecca has an estimated net worth of $1.1 million. Her net worth is influenced by her appearance in TV shows, her swimming center, and much more!

Talking about Rebecca’s love life, she is currently in a relationship with Andrew Parson. They have been together since 2018. Parson also has a good relationship with Rebecca’s daughter and she seems to like him a lot. However, she was previously married to the former swimmer, Harry Needs. They married on 7 September 2014 and have a daughter together. Her name is Summer and she was born in 2015. Rebecca gave birth at the age of 26 and the baby was 4 days overdue. However, the couple split their ways in 2016. 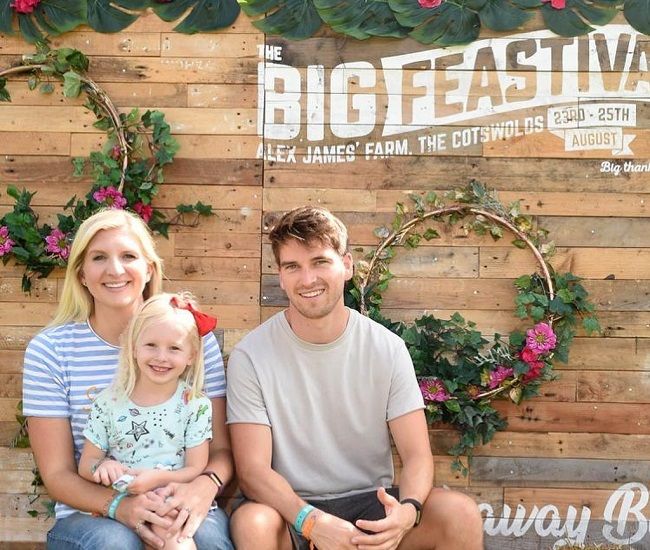 Caption: Rebecca with her daughter and boyfriend Andrew. Source: Instagram

In 2017, Rebecca was rumored to romantically link with former Olympic swimmer Mark Foster. The rumor further escalated when Rebecca was seen squeezing Mark’s leg during an interview. However, Mark came out as gay in late 2017 in an interview with the Guardian. During the same interview, Mark also explained the situation of Rebecca squeezing his leg. He explained that it is Rebecca’s way of indicating Mark to take over during the interviews whenever she doesn’t want to answer anything on live television.

Mark’s close circle knew about his sexuality prior to publicly coming out. And Rebecca is also among the close circle and hence she knew it way before the public! Mark and Rebecca didn’t speak about the rumors involving their romance because they didn’t want to make Mark feel “pushed” to share about his sexuality until he is comfortable. Moreover, there were also rumors that she is in a relationship with Thomas Haffield, but the two are BFFs as Rebecca mentioned in her Instagram post with him.

Regarding Rebecca’s body measurement stats, she stands tall at the height of 5 feet 10 inches and weighs around 70 kg. Likewise, she wears a dress size 13 according to US standards. Other details about her body measurements are not available. Further, she has blonde hair and blue eyes.