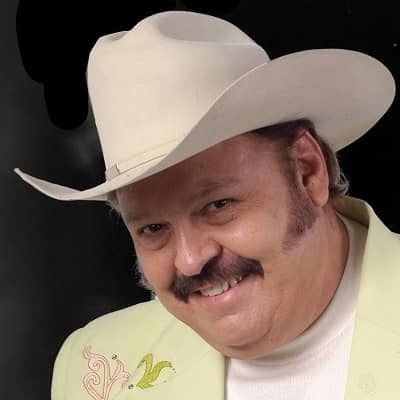 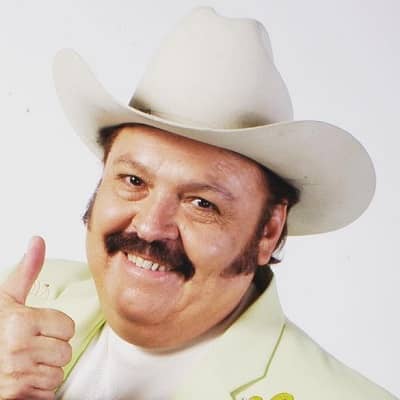 Ramon Ayala is a singer, songwriter, and accordionist from Mexico. With his unique accordion playing and lyrics, Ramon Ayala has defined much of modern Norteno music. His music preserves a classic northern ranchera sound despite the addition of modern guitars and percussion.

Ramón Covarrubias Garza known by his stage name Ramon Ayala was born on 8th December 1945, in Monterrey, Mexico. Ramon’s zodiac sign is Sagittarius and he is currently 75 years old. Moreover, his nationality is Mexican but he hasn’t revealed his ethnicity yet. 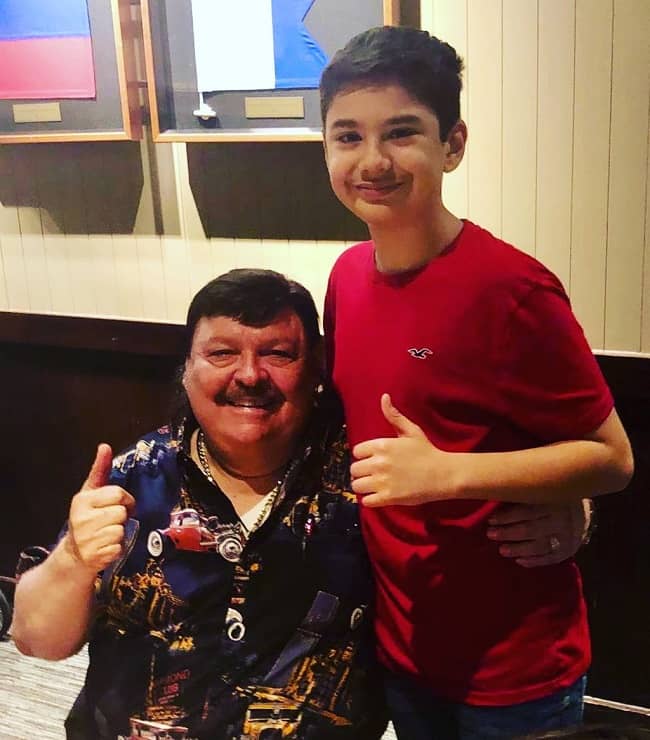 Ramon is the son of Ramon Covarrubias and Natalia Garza. His father was also a musician. As a child, he was a Catholic boy. In addition, he has a brother named José Luis Ayala, who was a drummer for Los Bravos del Norte. Recently, José dies from coronavirus complications. Talking about Ramon’s childhood life, there is not much information regarding it.

Taking about Ramon Ayala’s education life, there is not much information regarding it. We can assume that he has completed his education at a local school in Mexico. 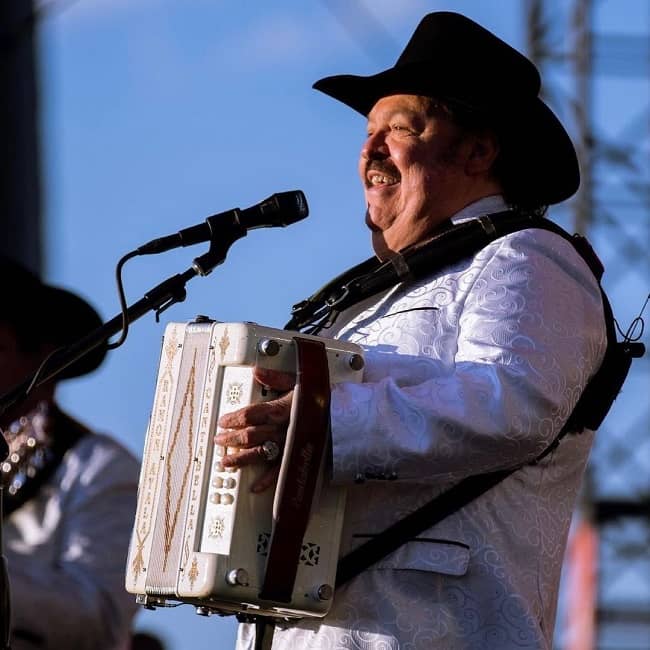 Ramón Ayala has dedicated his entire life to creating Norteno music. His father gave him his first accordion as a gift. In addition, his first band experience was a group known as Los Jilgueros de Marin. After that, he joined Los Pavoreales. Ramon and his family moved to Tamaulipas in 1959. Where Ramon worked in the cotton fields.

In 1963, Ramon met Cornelio Reyne at a cantina called ‘El Cadillac’. The two created Los Relampagos del Norte, which released a self-titled debut album. Los Relampagos Del Norte tore up the music charts for the following eight-year by innovating and re-inventing Norte music, which was previously considered strictly cantina music. The music and lyrics were livened up by Ramon and Cornelio to reach and appeal to a wider audience. The duo released 20 albums in total, including several hits like “El Disgusto,” “Devoucion,” “Mi Tesoro,” “Tengo Miedo,” and others

. On the other hand, Cornelio decided to leave Los Relampagos del Norte in 1971 and pursue a career as a mariachi musician. Many music professionals have opinions. Cornelio was the voice of Los Relampagos Del Norte at the time, and Ramon was simply the accordion player. Ramon’s brief career was doomed. However, Cornelio’s mariachi career was only average at best. The band was more popular than he had been as a new solo mariachi singer.

In late 1971, Ramon founded the famed band ‘Ramon Ayala y sus Bravos Del Norte’ to prove that he could make it on his own. Ramon was growing and earning a name for himself by early the next year, thanks to his new vocalist Antonio Sauceda. Antonio’s singing style and voice tone were comparable to Cornelio which worked well for Ramon. His playing style was able to change smoothly as a result of this.

Ramon lost his lead singer after solidifying his name at the top of the Norte music charts for the second time. Antonio had rediscovered his faith and had decided to enroll in a Christian seminary. Ramon Ayala’s loss of Antonio Sauceda turned out to be the best thing that could have occurred to him because he was compelled to find a new lead singer.

Eliseo Robles was the next lead singer he found. At the time, Eliseo was a member o  Ramon Ayala’s brother’s band, “Los Satellites de Fidencio Ayala.” Eliseo agreed to join Ramon and the two formed an artistic combination that excelled all others and is still considered the pinnacle of the genre today. They developed a style that has since become the de facto standard for Norte music. Ramon Ayala sus Bravos Del Norte’s album sales peaked in Mexico and the United States. During the Eliseo Robles Years, owing to their ability to deliver song after success, including “Un Rinconcito En El Cielo,” “Chaparral De Mi Amor,” and many others.

When Ramon was without a lead singer in the mid-80s, lightning struck once more. Eliseo Robles Unusual exit from the band is said to be primarily due to ego issues. Ramon went on the hunt for a new lead singer, his fourth in as many years, and found Antonio Coronado.  Antonio’s career and future with Ramon appeared to be as promising. But Antonio had an ego issue and the duo only released eight albums with the band before quitting in 1992.

With the arrival of Mario Marichalar, Ramon’s fifth and current lead singer, Ramon marked the 30th anniversary of his musical career in 1993. Ramon once again modified his style which hasn’t sat too well with his fans. He is still regarded as a great artist and one of the forefathers of modern norteo music.

As a musician, Ramon has won several awards and recognitions. He was awarded an American Grammy award for the album ‘En Vivo: El Hombre y Su Musica’ in 2001. The musician has been awarded two Latin Grammys for the albums ‘Quemame Los Ojos’ and ‘El Numero Cien’. He is now a resident of Hidalgo, Texas where he has a street named after him.

As a musician and giving many hit songs, Ramon has earned a huge amount of sum in his career. As per sources, he has an estimated net worth of $9 million US dollars which he earned from his musical career. 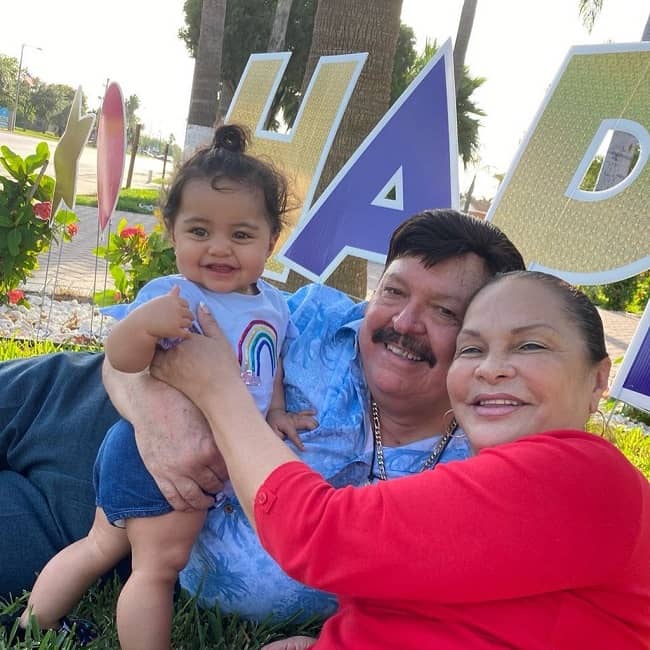 Caption: Ramon Ayala with his wife Rosa and their granddaughter (Source: Instagram)

Roman is a married man. He married Rosa Rodriguez. Firstly, they two met at a common friend’s party. During the time, Rosa did not know about Ramon. Whereas, Ramon was struggling in his career. Meanwhile, they both started liking each other’s company. After many years of courtship, both decided to get married. With the marriage, they have three children named Daddy Yankee, Ramon Aayla Jr, and a daughter, Yesenia Ayala. Daddy Yankee is a Purto Rican singer and Yesenia Ayala is a dancer and actress.

Besides that, there is information regarding his height, weight, and other body measurements.