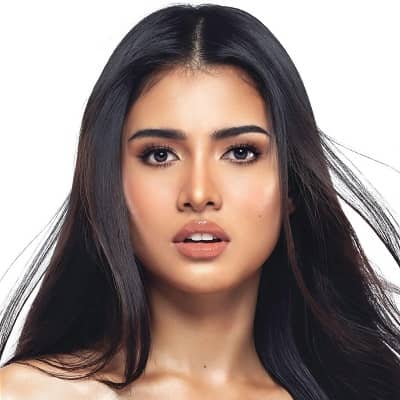 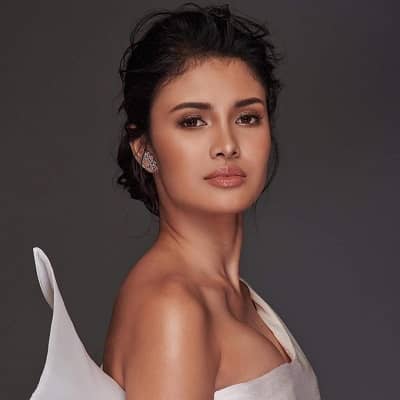 The model was born Rabiya Occeña Sundall Mateo on November 14, 1996, in Balasan, Iloilo, Philippines. Her first name is very ordinary among Muslim girls whose meaning is princess or queen in Arabic. Rabiya’s current age is twenty-five years old and her sun sign is Capricorn. Similarly, the beauty pageant holds an Indian-Filipino nationality and belongs to the Asian ethnicity. Rabiya also follows the Christian religion.

The beautiful model’s father was an Indian and American whereas her mother was Filipino. Her father was a Muslim. Later, her parents had to divorce in the year 2001. Rabiya respects her mother for not speaking anything bad about her husband to her kids to this day. After their divorce, Rabiya and her brother were living with her mother. Her mom was the only parent for them at that time. Moreover, it was out that the model was suffering from poverty from an early age. 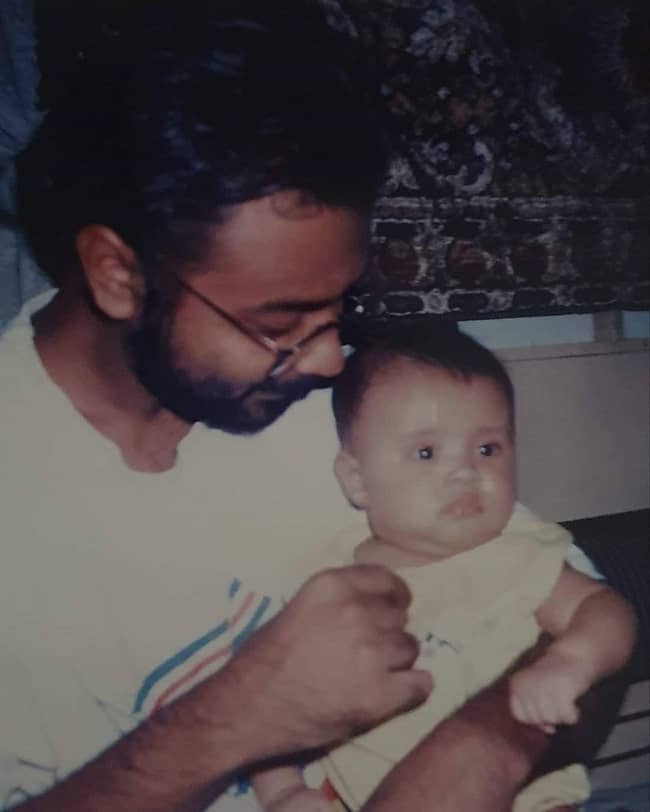 Caption: Rabiya Mateo with her father when she was a kid (Source: Instagram)

Rabiya Mateo has made a good amount of money and supporting her mother and brother as well. The model also earns some money by collaborating with various brands and by being present at various events and interviews. Since the model was from a poor family and was facing poverty issues from a very small age, she is aware of her wealth and its correct use.

After suffering a lot from the financial crisis, Rabiya Mateo now is living a luxurious and peaceful life together with her mother and brother. However, there is no information about Rabiya Mateo’s net worth, salary, and also the assets she owns.

In the year 2020, Rabiya Mateo was serving in the SRG Manila Review Center in the position of lecturer and review coordinator. Hence, Rabiya Mateo is an education advocate. Rabiya is also a member of a charity which promotes children living near a dumpsite in Iloilo City. Also, she was representing Iloilo City at the Miss Universe Philippines pageant of the year 2020 after she was the winner of the Miss Iloilo Universe of the year 2020 at West Visayas State University Cultural Center. Moreover, the beautiful personality is currently working as a social worker and entrepreneur as well.

In the question and answer round with the Top sixteen semifinalists, she was questioned, “Throughout this journey, you have discovered you are a phenomenal woman who is conditioned for greater. How can you create a positive and lasting impact on the world around you?” Then she replied, “First of all, I need to stick to my core, which is being passionate about educating people. I am a lecturer and I’ve been pursuing this because this education had helped me to have that comfortable life that I and my family deserve and I wanna push people, I want them to achieve greater things in life through me and I know that Miss Universe anything is possible because I am a phenomenal woman with a heartfelt beauty”.

She again answered by telling, “As a candidate, I know I am not just a face of Iloilo City but I am here carrying hope and as a symbol of light in the darkest of times. As of the moment, I want to help my community. I want to use my strength to make an impact. And that is the essence of a beauty pageant. It gives us the power to make a difference”. At the end of the program, Rabiya Mateo got the crown by the last Miss Universe Philippines, Gazing Ganados as Miss Universe Philippines of the year 2020. In addition, she also got the Best in Swimsuit award. 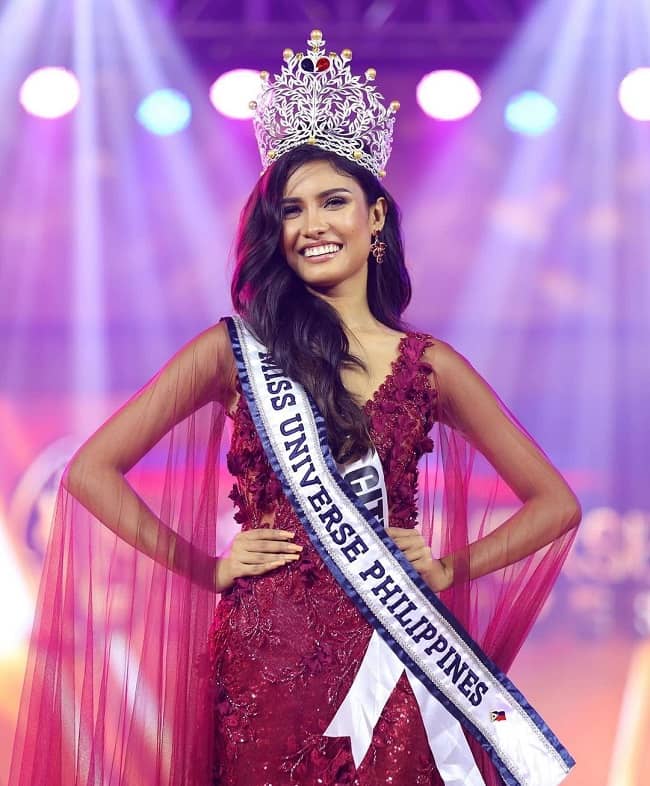 Caption: Rabiya Mateo after being crowned as the Miss Universe of the Philippines 2020 (Source: Instagram)

Regarding the beautiful model’s relationship status, she has never shared any information about her previous as well as her present love life. Her social media accounts also do not tell anything about her love life. As a young girl, Rabiya Mateo is currently very seriously focusing on her career as a model, social activist, and beauty pageant as well. Rabiya is trying to change the world with positivity and development.

Since the beautiful model is very busy helping everyone and making her career, she does not have any time left to be in a lovely romantic life. Mateo might be searching for a perfect partner who could support her work. Besides this, the pageant has also not been into any rumors and controversies as well. Mateo has been making a very clean, kind, and charming personality in front of the world now. 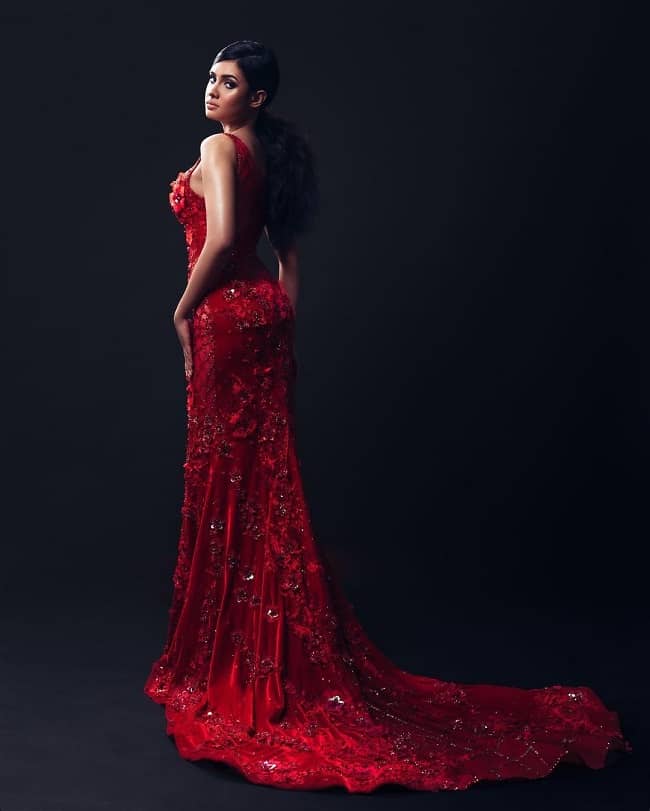 Looking at the model and beauty pageant’s physical appearance, she seems to be very concerned about her health and her beauty. As a model, Rabiya has to maintain her health and her body shape as well to get more popular and successful. The beauty pageant has an average height of 5 feet 6 inches or else 167 cm or 1.67 m. Similarly, Mateo has a body weight of around 55 kg or 121 lbs. Rabiya wears a shoe size of 5 (US) and has a slim and hourglass body type. Moreover, Rabiya has a pair of beautiful brown eyes with long and shiny black hair. Also, the beauty pageant has a medium complexion with a very gentle and charming personality.

Rabiya Mateo is also an Instagram influencer who motivates millions of women to get independent and work hard for their happiness and their countries. The beautiful personality is very active on the social media platform. On Instagram, she has 672 thousand followers whereas, on Twitter, she has 50.7 thousand followers. Likewise, she also has a Facebook page however it seems like she is not very popular there as she has less than 200 hundred followers there. However, it is for sure that, Rabiya Mateo will be popular all over the world for her beauty and her kind words as well.