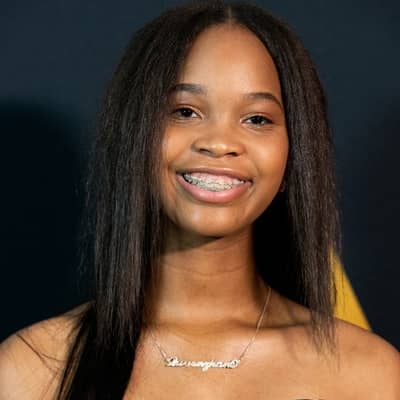 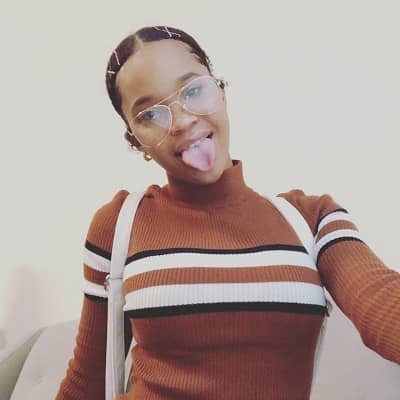 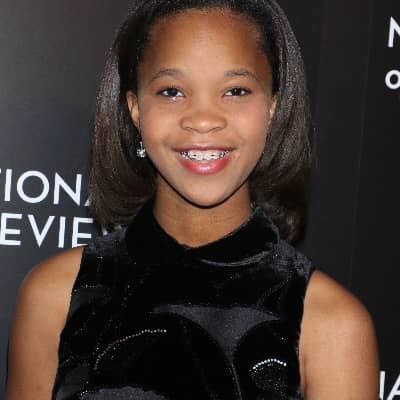 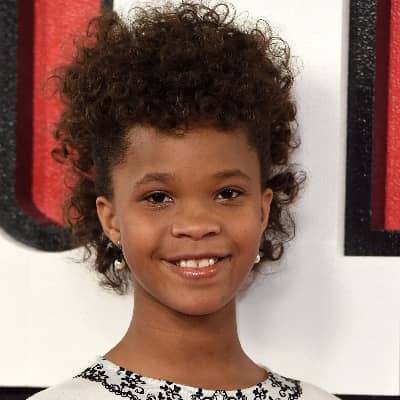 Quvenzhane Wallis is an American actress, model, singer, and author. Quvenzhane Wallis had her breakthrough role as ‘Hushpuppy’ in the 2012 indie film ‘Beasts of the Southern Wild’, which earned her an Academy Award nomination.

Quvenzhane Wallis was born on 28th August 2003, in Houma, Louisiana, USA. Presently, she is 17 years old and her birth sign is Virgo. She was born to Qulyndreia Wallis (mother), a teacher, and Venjie Wallis, Sr. (father), a truck driver. Moreover, she has three siblings, a sister named Qunyquekya, and two brothers, Vejon and Venjie, Jr.

Further, the first part of her name combines the first syllables of her parents’ first names. Regarding her educational journey, she attends ‘Honduras Elementary School’. 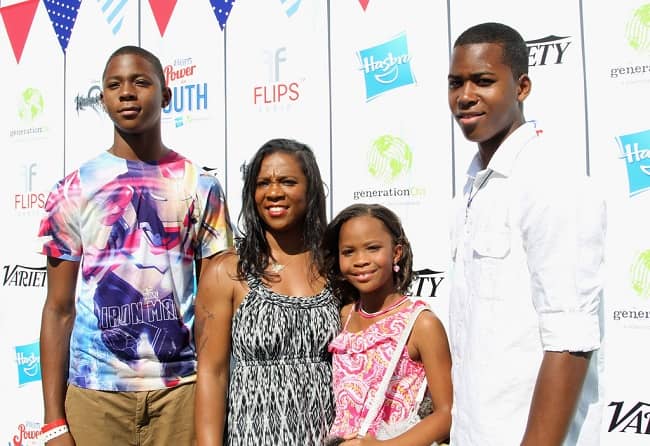 Caption: Quvenzhane Wallis clicking a photo with her mother and brothers. Source: Zimbio

At age five, lied about her age to audition for her first acting job, the starring role in Beasts of the Southern Wild because the minimum age to be considered was six. Eventually, she beat out 4,000 others for the role of Hushpuppy, the indomitable child prodigy, and survivalist who lives with her dying father in the backwoods bayou squalor of Louisiana.

Moreover, her reading ability, loud scream, and the skill of burping on command impressed the director and won her the part. Moreover, the film premiered at Sundance Film Festival in January 2012 to rave reviews, winning the Grand Jury Prize. In May 2012, Wallis flew to France for the premiere of the film at the Cannes Film Festival.

The film received much acclaim and praise for Wallis’ outstanding performance, and it won the prestigious Caméra d’Or award for Best First Feature Film. On January 10, 2013, at age nine, Wallis became the Academy Awards’ youngest nominee for ‘Best Actress’ and third youngest in all categories. Therefore, she was just six during the filming. 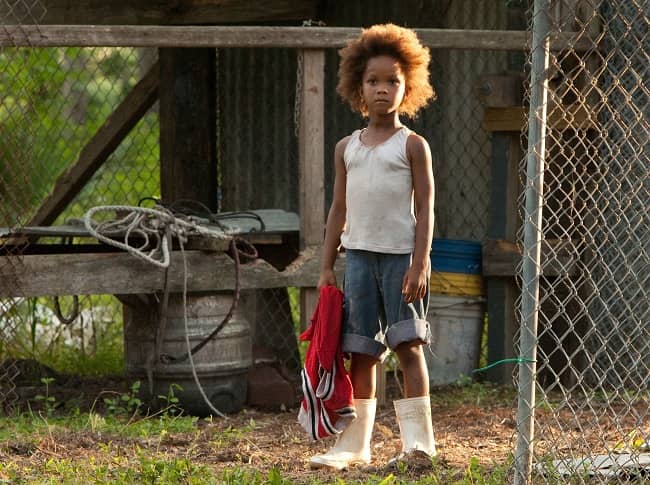 She is the first African-American child actor to earn an Oscar nomination. Wallis is also the first person born in the 21st century to be nominated for an Academy Award. She had a role in the film ’12 Years a Slave’ (2013) and collaborated with ‘Sundance’ for the second time on a short film called ‘Boneshaker’.

Similarly, in 2014, she played Annie Bennett Stacks in Annie. Moreover, she made history as the first African American to play Annie. And, for this, she was nominated for the ‘Golden Globe Award for Best Actress in a Motion Picture – Comedy or Musical’. And, in May 2014, Wallis has named the face of ‘Armani Junior, Giorgio Armani’s’ line for children and teens. Therefore, this makes her the first major child celebrity to be the face of a luxury brand.

Wallis was also featured in Beyoncé’s 2016 short film “Lemonade”, appearing in the music video “Formation”. Similarly, in October 2017, she released two children’s books: ‘Shai & Emmie Star in Break an Egg!’ (which is about friendships) and ‘A Night Out With Mama’ (which is about her night at the Oscars with her mother).

Likewise, she followed those with two more books: ‘Shai & Emmie Star in To the Rescue!’ and ‘Shai & Emmie Star in Dancy Pants!’ in 2018. Not only is she a movie star, but this teen is also a passionate singer. Her songs Opportunity and Tomorrow from her movie ‘Annie’ have gotten over 4 million views on ‘YouTube’. 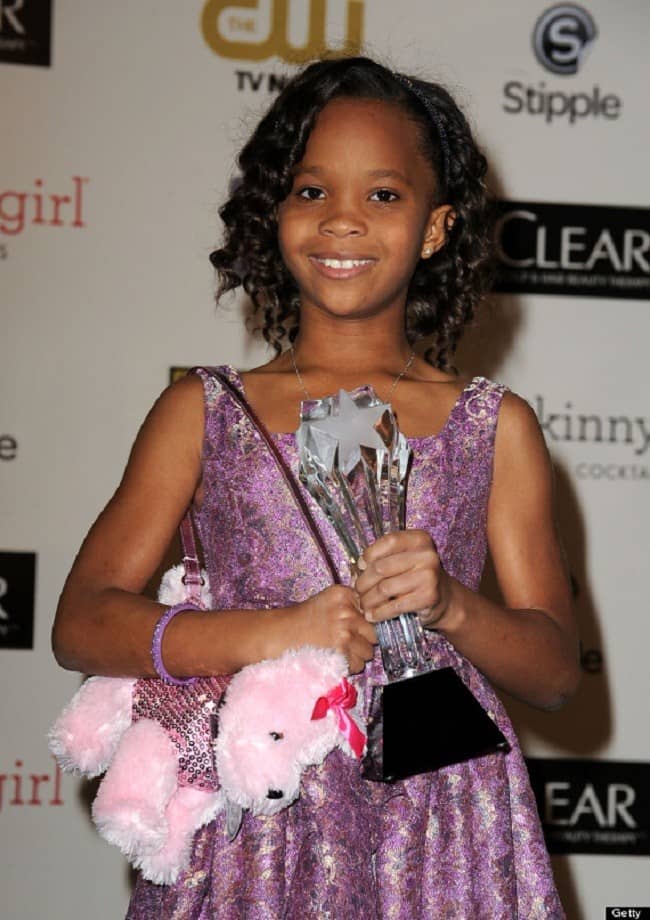 This young personality has never dated anyone publicly yet. There is no record of her past and present relationship. However, she is most probably single at the moment. She has maintained a good profile regarding her personal and professional life. She has got enough time to be in a relationship and find a good match for herself.

Wallis is a beautiful girl having an attractive personality. She stands the height of 4 feet 11 inches tall and weighs around 38 kilos. She has not shared her virtual body stats. However, her body measurements including height and weight might change for some more years. Moreover, she has a pair of dark brown eyes and dark brown hair.

She is socially active on different social media sites. Her Instagram account ‘@iamquvenzhane’ has earned over 69.9K followers. She has amassed over 34.5K followers. And, her official Facebook page has gained over 9K followers.

As of August 2020, Quvenzhane Wallis is estimated to have a net worth of $800K. Therefore, she has made her wealth through her acting career.