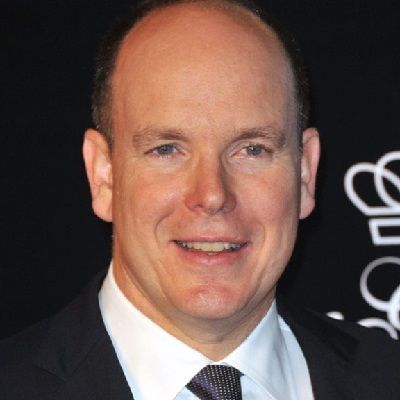 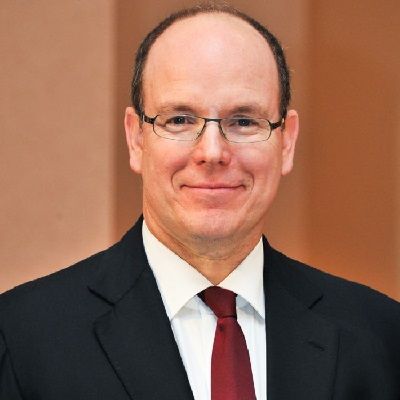 Prince Albert II is the reigning Prince of Monaco. Prince Albert II is also the head of the princely house of Grimaldi. He recently tested positive for the novel coronavirus that is causing the global pandemic COVID-19. Despite the illness, the prince is doing quite well and working from the office at his private residence.

Prince Albert was born in the Palace of Monaco on March 14, 1958. And is currently 64 years old. He was baptized on 20 April 1958, by Monsignor Jean Delay, archbishop of Marseille, in the Cathedral of the Immaculate Conception of Monaco, before being presented on the balcony of the Palace to the people of Monaco. His parents are his father Rainier III, Prince of Monaco, and his mother Grace Kelly, who was an American Actress.

He has ancestry from Italy, Ireland, Britain, the United States, Germany, France, Mexico, Belgium, and Monaco. Moreover, he is American-Monegasque by birth. However, he renounced his American citizenship in early adulthood.

Likewise, his godmother was the Spanish queen Victoria Eugenia of Spain, and his godfather was Prince Louis de Polignac (1909–1996). His mother passed away due to injuries sustained in a car accident in 1982. She was 52 years old at the time of her demise.

In 2017, in an In-Depth interview with Graham Bensinger, the Prince of Monaco stated that his mother’s death was a traumatic event for him and the family. Additionally, the prince also revealed that his father was “never the same man” after the loss. 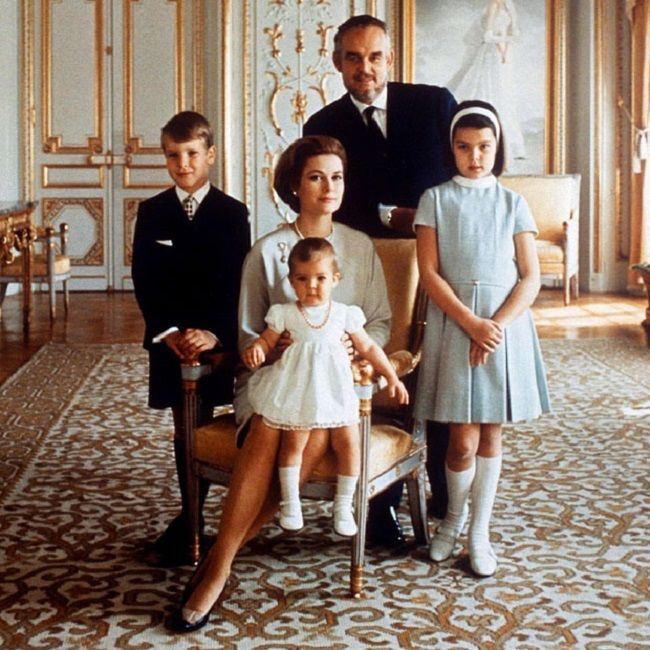 Caption: An old portrait of the Royal Family of Monaco. Source: Unofficial Royalty

Prince Albert II graduated with distinction from the Lycée Albert Premier, in 1976.

Prince of Monaco was a camper and later a counselor for six summers at Camp Tecumseh, on Lake Winnipesaukee, Moultonborough, New Hampshire, in the 1970s. The prince spent a year training in various princely duties and enrolled at Amherst College, in western Massachusetts, in 1977 as Albert Grimaldi, studying political science, economics, music, and English literature; he also joined the Chi Psi fraternity. He speaks French, English, German, and Italian.

Moreover, the prince spent mid-1979 touring Europe and the Middle East with the Amherst Glee Club. He also undertook an exchange program with the University of Bristol, at the Alfred Marshall School of Economics and Management in 1979. Albert graduated in 1981 with a Bachelor of Arts degree in political science. He then did his military service in the French Navy.

This popular Prince of Monaco has earned a hefty amount of money throughout his career. He has a net worth of $1 billion as of 2022.

Prince Albert II of Monaco tested positive for COVID-19, making him the first reigning monarch a.k.a. head of state to publicly announce a diagnosis for the coronavirus-caused respiratory disease. The news broke on 19th March 2020. In a statement, the officials from the city-state palace said that his health is not worrying at all despite the findings.

Albert is one of the world’s wealthiest royals. He serves as the head of state for one of the smallest countries on the planet. Monaco has around 40,000 residents. Moreover, they officially invested in the prince as the country’s leader in 2005.

The palace’s statement also said that he will continue working from his office in his private apartments and that he constantly remains in contact with the government despite the illness. It added:

“His Serene Highness urges the people of Monaco to respect the measures of confinement and to limit contact with others to a minimum.”

Specialists from Princess Grace Hospital are treating the prince. It is the hospital named after his famous American mother, formerly known as Grace Kelly. There were nine cases of coronavirus before the announcement of the monarch’s diagnosis.

The WHO reports as of Thursday,  there are nine coronavirus cases in Monaco — while France, which surrounds the tiny Mediterranean country, is one of the most severely hit by the new virus with nearly 11,000 cases and more than 370 deaths.

Additionally, Albert competed in the bobsleigh at five consecutive Winter Olympics for Monaco, taking part in both the two-man and four-man events. He also participated in the 1985 Paris–Dakar Rally but did not finish it. He also became a judo black belt.

Moreover, on March 31, 2005, Monaco’s Crown Council transfers the regency of the tiny kingdom to Prince Albert, the heir to the throne, saying that Prince Rainier can no longer carry out his duties as a monarch. Later, on April 6, 2005, Prince Rainier III dies of organ failure and Prince Albert becomes Albert II, Sovereign Prince of Monaco.

Further, on April 16, 2006, the prince traveled to the North Pole by dogsled to highlight global warming. And on March 2, 2007, the prince presides over the opening ceremony in Paris of International Polar Year, a research program with a focus on the Polar Regions involving 50,000 scientists from 63 countries.

Similarly, on January 28, 2008, the United Nations Environment Programme (UNEP) named the Prince of Monaco “Champion of the Earth.”

As of April 22, 2008, Albert II received the UNEP award which recognizes individuals who show extraordinary leadership on environmental issues. Then on January 5-14, 2009, the prince completes an expedition to the South Pole evaluating climate impact on Antarctica along the way. He is the only head of state to have visited both poles.

Additionally, in October 2013, the prince loaned pieces of his private collection of Olympic torches for the Russian exhibition of Olympic torches. And on October 7, 2013, the prince becomes one of the first torchbearers for the 2014 Sochi Olympic Winter Games. Similarly, on December 14, 2015, he is presented with the 2015 Global Advocate Award by UN Secretary-General Ban Ki-moon for his work on climate change research and environmental conservation efforts.

Later, in October 2016, the prince buys his mother’s childhood home in Philadelphia, with the idea of turning it into a museum or office for foundation work.

On July 1st, 2011, Prince Albert married former South African swimmer Charlene Wittstock. They announced their engagement on 23 June 2010 but were seen together at several events before the official announcement. They were seen together for the first time on 10 February 2006. It was when Wittstock accompanied Albert to the opening ceremony of the Torino Olympics. Since then, they appeared time and again at several official events.

The Royal Wedding of the Prince of Monaco and Charlene Wittstock took place over two days. One was the civil marriage ceremony that took place on 1 July 2011. Another was the religious ceremony on 2 July 2011. 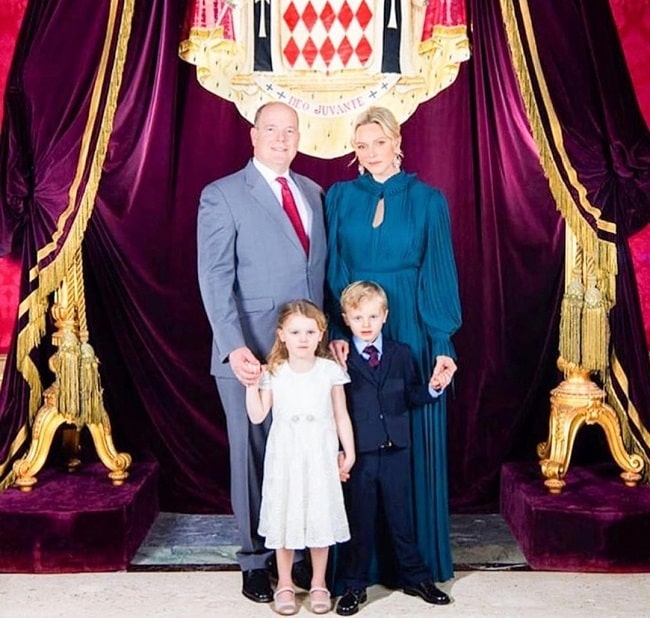 Prince Albert and Princess Charlene welcomed their first and second child, twins Gabriella Thérèse Marie and Jacques Honoré Rainier on 10 December 2014. The twins were born at Princess Grace Hospital in La Colle, Monaco. Jacques is his father’s heir-apparent and hence he bears the titles Hereditary Prince of Monaco and Marquis of Baux. The Prince of Monaco also granted Gabriella the title of Countess of Carladès.

Before marriage, the Prince of Monaco also fathered Jazmin Grace Grimaldi with an American woman, Tamara Rotolo. After lawsuits and DNA tests, the prince admitted that she is his daughter indeed on 31 May 2006 and also invited her to study and stay in Monaco.

The prince also had a son named Alexandre Grimaldi-Coste with Nicole Coste, a former Air France flight attendant. On 6 July 2005, a few days before his enthronement on 12 July, Albert officially confirmed through his lawyer Lacoste that the then 22-month-old was his biological son.

The Prince of Monaco has an interest in environmental issues, alternative energy, and hybrid vehicles. He is an avid athlete and has competed in five Winter Olympics (1988, 1992, 1994, 1998, 2002). He took part in the sport of bobsledding but has not won any medals. Moreover, he has been a member of the International Olympic Committee since 1985. His two oldest children are not in line for the throne, because they were born out of wedlock.

Talking about his body measurements, Prince Albert II stands tall at a height of 5 feet 11 inches. He weighs around 187 lbs, i.e. 85 kgs. Besides, he has brown hair and blue eyes.

He doesn’t have social media accounts on many websites. He does have a Facebook account with 276k followers and 265.9k likes. The Facebook page name is “Palais Princier de Monaco – Prince’s Palace of Monaco”.