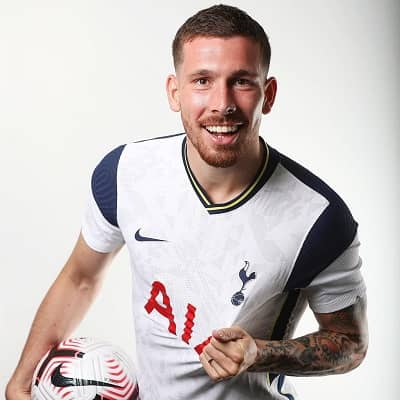 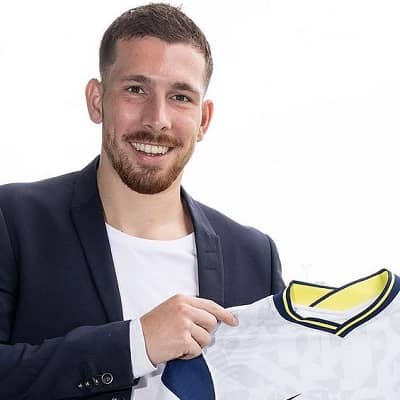 On August 5, 1995, Pierre-Emile Kordt Hojbjerg was born and is 26 years old currently. Copenhagen, Denmark, is where he was born. His Danish father, Christian Hojbjerg, and his French mother, whose name is unknown, gave birth to him. He was the second of three children born in his parents’ marriage. Similarly, he is a citizen of Denmark. He is of Danish descent from Amager. Christianity is his religion. Leo is his horoscope sign. 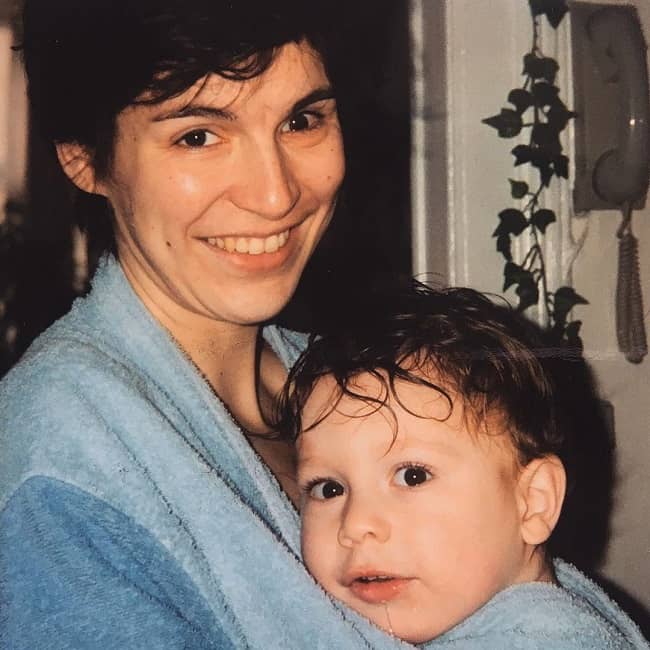 FC Nurnberg, making him the youngest player ever to play for Bayern Munich’s first team in the Bundesliga. He made two appearances for the first team in the 2012-13 season, scoring no goals as Bayern Munich won the Bundesliga and the UEFA Champions League. Likewise, he also played for the reserve team that season, making 30 appearances and scoring 8 goals.

He was a member of the Bayern Munich squad that won the 2013 FIFA Club World Cup in Morocco on December 21, 2013, despite not playing in the tournament. Additionally, he started the DFB-Pokal final for Bayern Munich on May 17, 2014, in a 2-0 extra-time win over Borussia Dortmund, and he played for 102 minutes. In the 2013-14 season, he made seven appearances for Bayern Munich’s first team, scoring no goals as the club won the Bundesliga, DFB-Pokal, and FIFA Club World Cup. He also played 14 times for the reserve team that season, scoring four goals.

He extended his contract with the club until 2018 on January 8, 2015. Similarly, he had no goals in eight Bundesliga appearances, one German Cup appearance, and three Champions League appearances in the 2014-15 season. He was loaned to FC Augsburg, also of the Bundesliga, for the remainder of the 2014-15 season on January 7, 2015. He made his first appearance for the club on February 1, 2015, in a 3-1 victory over TSG Hoffenheim. In a 2-1 loss to SC Paderborn 07. on April 11, 2015, he scored his first Bundesliga goal for the club. He made 16 appearances for FC Augsburg during his loan spell, scoring two goals and providing three assists across all competitions.

He signed a season-long loan with fellow Bundesliga club Schalke 04 on August 28, 2015. In the Europa League group stages, he made his debut for the club on September 17, 2015, in a 3-0 win over APOEL Nicosia. He made 30 appearances for Schalke 04 during his loan spell, providing two assists in all competitions where he did not score a goal. He told the Danish newspaper B.T. at the end of the season that the time had come for him to leave Bayern Munich and play first-team football elsewhere.

Likewise, he signed a five-year contract with English club Southampton on July 11, 2016, for an estimated fee of £12.8 million. On August 13, 2016, he made his Premier League debut against Watford in a 1-1 draw at home. He made 37 appearances for the club in his first season, providing one assist in all competitions where he did not score a goal.
In the sixth round of the FA Cup, he scored his first goal for the club in a 2-0 win over League One side Wigan Athletic on March 18, 2018. He made 32 appearances for the club in the 2017-18 season, scoring once in all competitions.

Hughes’ successor, Ralph Hasenhuttl, made him the club captain for the 2018-19 season. He appeared in 33 games for the club that season, scoring four goals and providing four assists across all competitions. After publicly expressing his desire to leave the club in June 2020, he was stripped of his captaincy and replaced by Ward-Prowse. He made 38 appearances for the club in the 2019-20 season, providing one assist in all competitions where he did not score a goal. 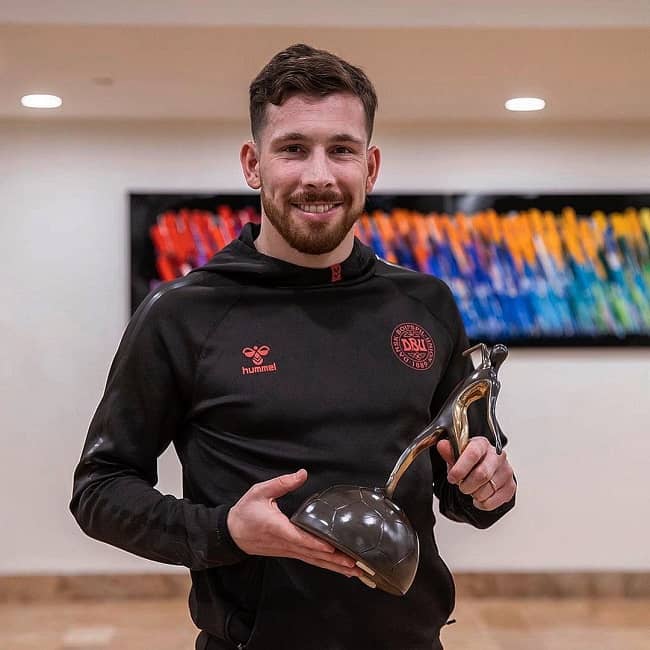 Additionally, he signed a five-year contract with Tottenham Hotspur on August 11, 2020, for a reported initial fee of £15 million-plus add-ons. On September 13, 2020, he made his debut for the club in a 1-0 home loss to Everton. With his performances, he quickly established himself as a key member of Jose Mourinho’s defensive midfield squad, earning him a nomination for Premier League Player of the Month in November. In a 1-3 home league defeat by Liverpool on January 28, 2021, he scored his first goal for the club with a 20-yard strike.

Moreover, he made the most appearances by a player in the 2020-21 season in his first season (3420 minutes). He appeared in 53 games for the club that season, scoring two goals and providing five assists across all competitions.

At various ages, he has represented Denmark. He’s played for Denmark at the U16, U17, U19, U21, and senior levels.
On May 28, 2014, he made his international debut for Denmark in a 1-0 friendly win over Sweden. In a 2-1 win over Armenia in the UEFA Euro 2016 qualification campaign on September 7, 2017, he scored his first international goal for Denmark. He was named to Denmark’s preliminary 35-man squad for the 2018 FIFA World Cup in Russia in May 2018, but he was not selected for the final 23. Furthermore, he was named to Denmark’s UEFA Euro 2020 squad in June 2021. He has over 40 caps for his country since making his debut.

He makes a living as a professional football player. Contracts, salaries, bonuses, and endorsements are all sources of income for him. He signed a five-year contract with English club Southampton in July 2016 for an estimated fee of £12.8 million. He signed a five-year contract with Tottenham Hotspur in August 2020, for a reported initial fee of £15 million-plus add-ons. His net worth is estimated to be €14.7 million in 2022, with a salary of £5.2 million. His current market value is estimated to be around €35 million.

Pierre-Emile Hojbjerg is a married man, according to his personal life. On December 7, 2019, he married his lovely girlfriend Josephine. Rosa (born 2017) and Theo (born 2018) are the couple’s two children (born 2020). Additionally, he is in a loving relationship with his wife and children, and they are living a happy life together. 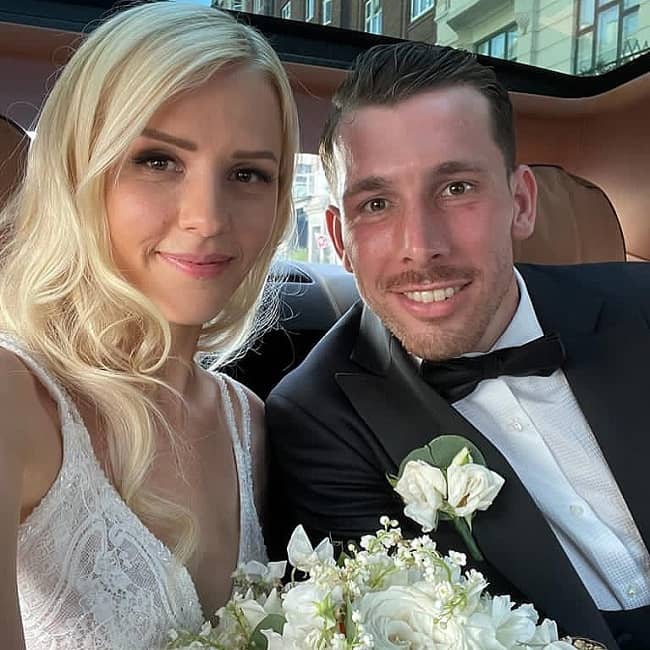 Pierre-Emile Hojbjerg is 1.85 meters tall, or 6 feet and 1 inch tall. He is 81 kilograms in weight. He has a muscular physique. His eyes are brown, and his hair is a dark brown color.