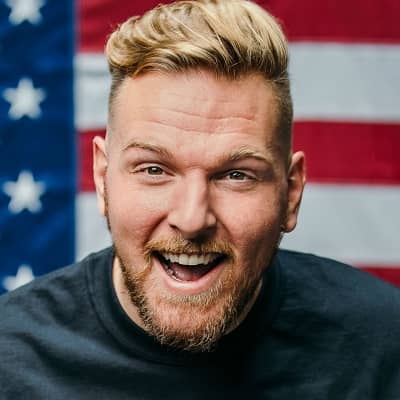 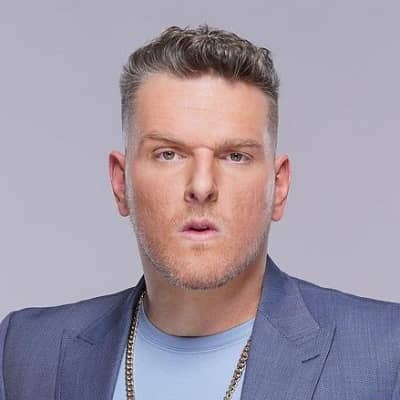 Pat McAfee was born in Plum, Pennsylvania, the United States on May 2, 1987. The color commentator’s zodiac sign is Taurus and he is currently 34 years as of 2021. Moreover, his real birth name is Patrick Justin McAfee. The color commentator holds American nationality and belongs to the White ethnic background. 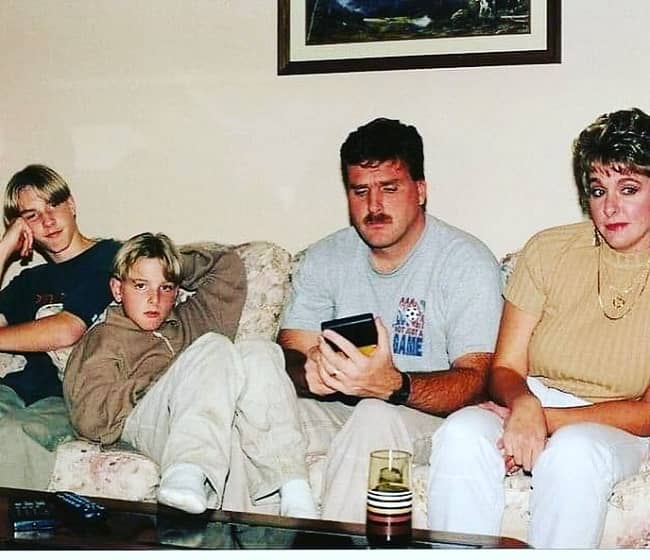 Pat McAfee attended Plum High School in his hometown and used to play football, American football, and volleyball. As a senior, the color commentator borrowed $100 from a friend and turned it into $1400 by playing poker at an illegal club.

Pat McAfee began on field goals as a freshman and finished the season with 70 kickoffs and 20 touchbacks for West Virginia. His most remembered game was a 46–44 triple-overtime victory over Louisville, which came after a successful McAfee onside kick. Running back Steve Slaton had an opportunity to tie the game with a one-yard touchdown run after the onside kick.

During his sophomore season, his team won 10 games and were winners in the Gator Bowl over Georgia Tech despite their losses to Louisville and USF. He started his junior season with a failed extra point against Western Michigan but finished with 106 extra points in a row. Moreover, he ended the season with a 2-for-4 performance in the Fiesta Bowl, with one attempt being blocked by Oklahoma. During his senior season, he started with a victory over Villanova with 48-21 in which he kicked two field goals.

He overtook Slaton as the school’s all-time greatest scorer with a field goal in the following 27–3 victory over Marshall. He was invited to the 2009 Senior Bowl in Alabama after his senior season at West Virginia, alongside Mountaineers Pat White and Ellis Lankster. Moreover, Pat MacAfee began the Senior Bowl as the kicker for the South team. He won the “round the world” kicking challenge at the 11th annual State Farm College Football All-Star Challenge.

After that, The Indianapolis Colts selected the color commentator in the seventh round of the 2009 NFL Draft. He was signed before training camp in 2009, and he punted and kicked off for the Colts. In 2009, he assisted the Colts in winning the AFC South, the AFC Championship, and advancing to Super Bowl XLIV. Moreover, he revealed on March 7 that he has signed a five-year contract extension with the Colts.

Pat McAfee announced his intention to join Barstool Sports as a contributor on February 2, 2017, after retiring from the NFL in eight seasons. Due to his knee surgery, he decided to retire as well as his bad relationship with Colt’s general manager Ryan Grigson. However, he came out of retirement to play for his hometown Pittsburgh Steelers after four years during the 2020 NFL season.

After his retirement, he joined Barstool Sports and also hosted The Pat McAfee Show on SiriusXM channel Barstool Power 85. On August 31, 2018, he announced his departure from Barstool Sports, claiming a lack of transparency inside the company as the reason. After quitting Barstool Sports, he established “Pat McAfee Inc.” from his former headquarters in Indianapolis. Then, he debuted as a college football broadcasting for FOX on November 24, 2018. 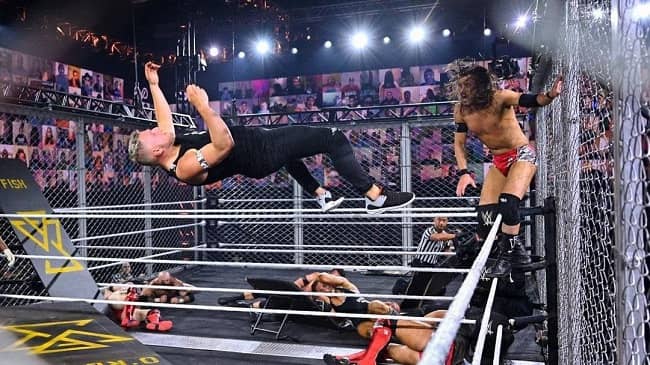 On March 22, 2009, Pat McAfee participated in a match against The WarPig in an IWA East Coast event in South Charleston, West Virginia. After nine years, he made his appearance at the NXT show in Indianapolis in March 2018, when he prevented Adam Cole from winning by disqualification against Aleister Black. After that, he trained as a professional wrestler with Rip Rogers in June 2017. He started appearing on WWE programming as a pre-show analyst for the NXT Takeover event during 2018.

During his junior season, ESPN named him to the ESPN All-Bowl Team after his performance in 2007. In 2007, he was a semi-finalist for the Lou Groza Award, which honors the greatest collegiate kicker. In 2007, McAfee was awarded second-team All-Big East and three times received Big East Special Team Player of the Week accolades.

The AFC named him the AFC Special Teams Player of the Month in September 2014. He was named First-Team All-Pro punter by the Associated Press on January 2, 2015. McAfee was chosen for his second Pro Bowl on December 20, 2016. In 2020, he received the NXT Year-End Award for the Rivalry of the Year against Adam Cole and Rookie of the Year by Wrestling Observer Newsletter. 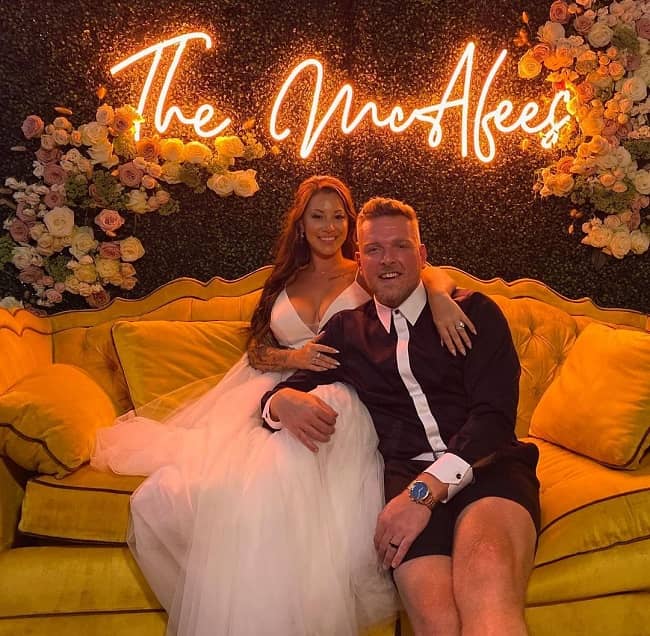 The police arrested and charged Pat McAfee with public intoxication and Class B misdemeanor on October 20, 2010. At that time, a woman reported that he swam in a canal in a popular nightclub area Broad Ripple. After that, the Colts issued a one-game suspension for his actions. Later, the color commentator issued an apology for his actions after two weeks of his arrest.

Pat McAfee has dark brown eyes and light brown hair. The color commentator stands at 6 feet 1 inches tall and weighs around 106 KG. Besides that, there is no further information about the color commentator’s other body measurements. 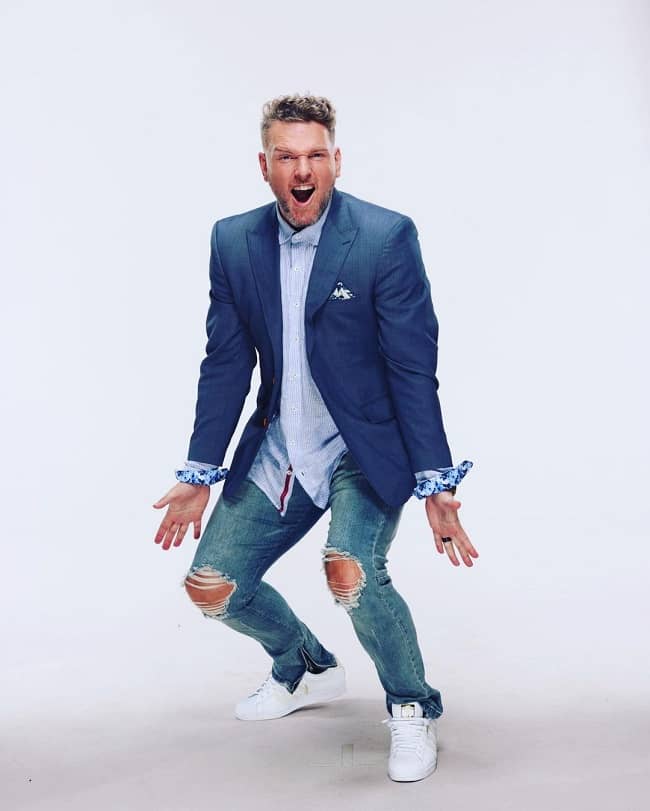