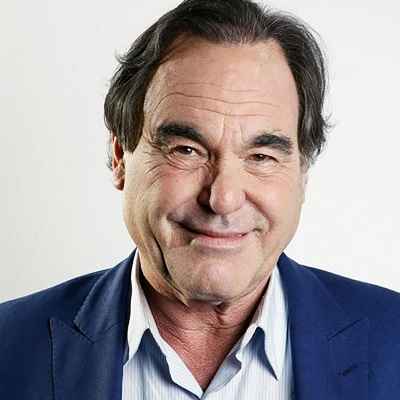 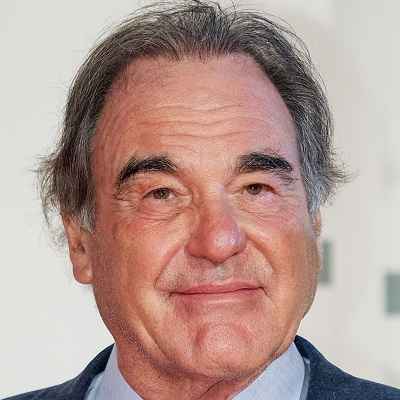 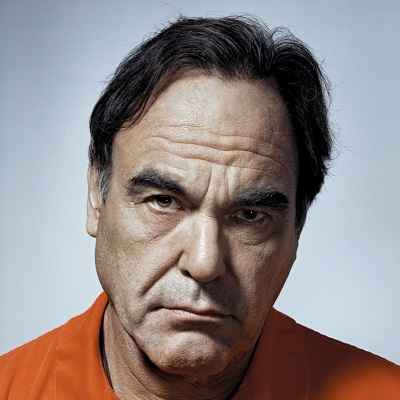 Oliver Stone is a famous American film director, screenwriter, and producer. Oliver Stone is best known for films like Midnight Express, Platoon, Salvador, JFK, Nixon, and W. among others.

Oliver Stone was born on 15 September 1946 and he is currently 76 years old. He hails from New York City and his zodiac sign is Virgo. Similarly, his full name is William Oliver Stone.

Talking about his family, his parents are Jacqueline (née Goddet) and Louis Stone (born Louis Silverstein). His father was a stockbroker but his mother’s profession is not mentioned.

Likewise, his mother is French and hence he has an ethnicity of French-American. Moreover, his mother was a Roman Catholic whereas his father was Jewish. Although raised in the Episcopal Church, Stone now practices Buddhism. 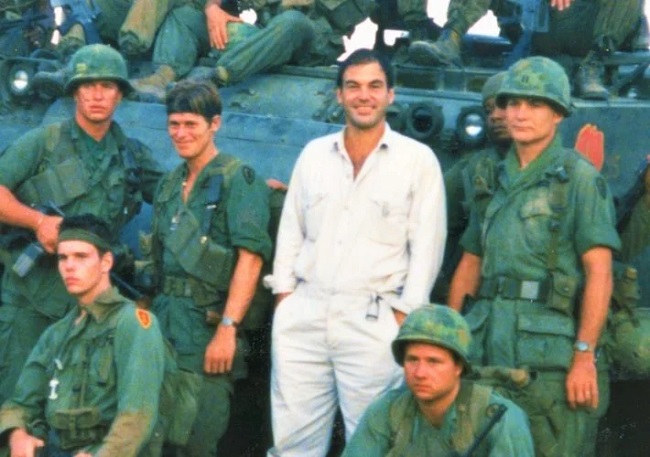 Caption: Oliver Stone in a photo from his time serving as a infantryman during Vietnam war. Source: Eighties Kids

Regarding his education, this personality attended Trinity School in New York City. Later on, his parents sent Oliver away to The Hill School and graduated from this institution in 1964.

For his further studies, he attended Yale University but left in June 1965 at age of 18 years. He left the institution to teach high school students English for six months in Saigon at the Free Pacific Institute in South Vietnam.

Professionally, Oliver Stone is a famous film director, screenwriter, and producer. He has won an Academy Award for “Best Adapted Screenplay” as the writer of Midnight Express released in 1978. This personality has also written the gangster film remake Scarface released in 1983.

Likewise, this film director achieved prominence as writer and director of the war drama Platoon released in 1986. This drama won Academy Awards for “Best Director” and “Best Picture”.

Moreover, this drama was the 1st in a trilogy of films based on the Vietnam War. Stones then continued the series with Born on the Fourth of July released in 1989 and Heaven & Earth released in 1993. The former won him his 2nd “Best Director Oscar. 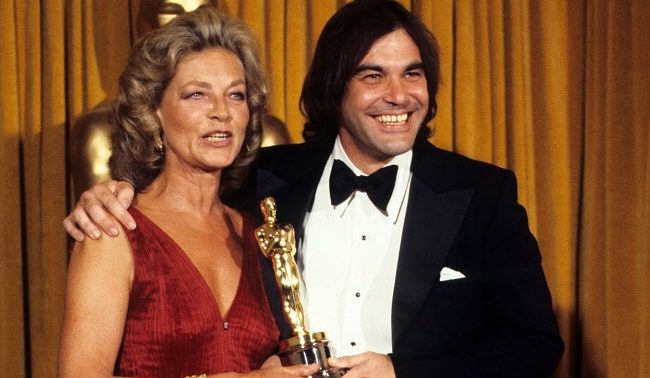 Many of this director’s films focus on controversial American political issues during the late 20th century. His works also often combine different camera and film formats within a single scene best seen in JFK, Natural Born Killers, and Nixon.

Furthermore, like his subject matter, this director has become a controversial figure in American filmmaking. Critics accuse Stone of promoting conspiracy theories, and of misrepresenting real-world events and figures in his works. Similarly, Stone has also been frequently critical of American foreign policy and approved of leaders like Hugo Chávez and Vladimir Putin. 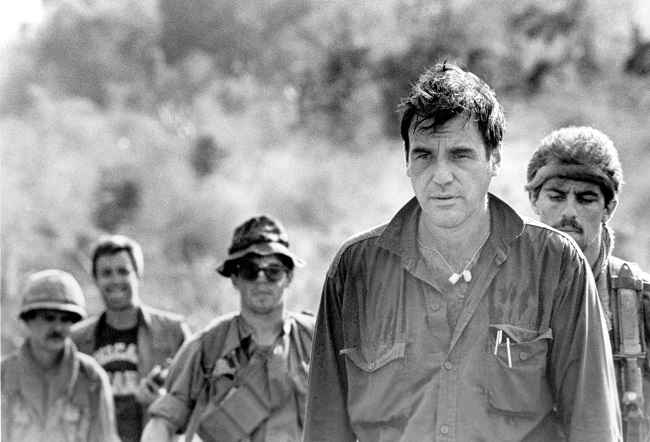 Caption: Oliver Stone was photographed while working on the film Platoon. Source: The New York Times

Oliver Stone might have worked with various brands and companies over the decades working as a film director.

He might have collaborated with many companies that lent their hands for the production of his films, providing their services in various factors like folding, lodging, clothing, etc. of his actors and staff during the filming of his films over the decades.

However, Oliver has never exclusively mentioned who he has collaborated with for these matters.

From his 2nd marriage, Oliver has two sons namely Sean Stone/Ali born in 1984, and Michael Jack born in 1991. His elder son appeared in some of his films as a child. Likewise, his elder son Sean has also worked for the Russian state media company RT America since 2015.

His 2nd marriage ended in divorce in the year 1993. Since 1996, this personality has been married to a South Korean lady named Sun-jung Jung. From this marriage, Oliver has a daughter named Tara born in 1995. 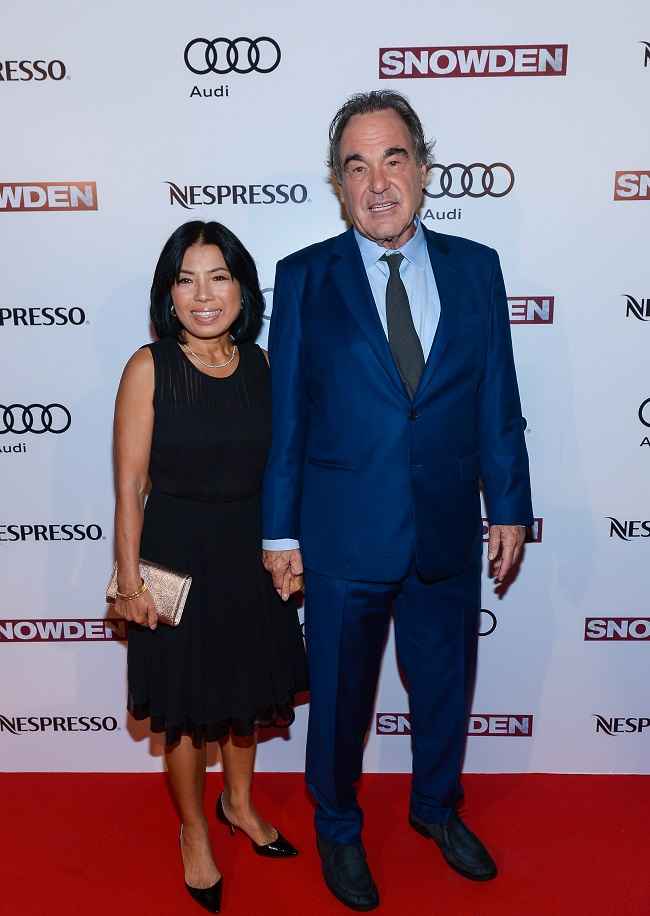 Caption: Oliver Stone posing for a photo with his wife Sun Jung Jung at an event. Source: Panda Gossips

Oliver Stone stands tall at an approximate height of 6 feet 1 inch or 1.83 meters and his weight is around 87 kg or 192 lbs. Likewise, Stone has brown eyes and hair of the same color that has turned grey with aging.

Talking about his social media presence, Oliver Stone joined Twitter in March 2012 and so far has over 230.4K followers on his @TheOliverStone account. Likewise, his username on Instagram is @officialoliverstone.

Moving on, Oliver has a net worth of around $70 million US dollars. He generates his income and net worth through his active and successful career as a screenwriter, director, and producer.