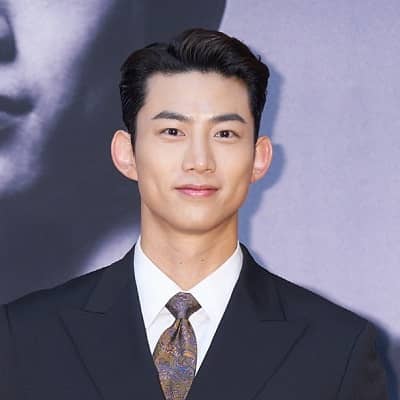 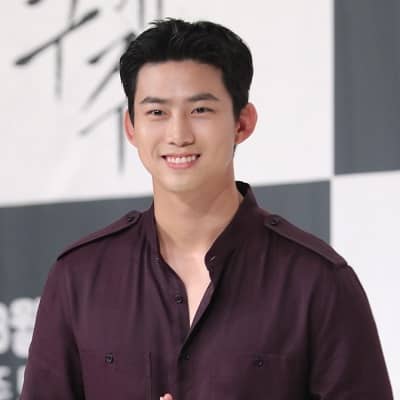 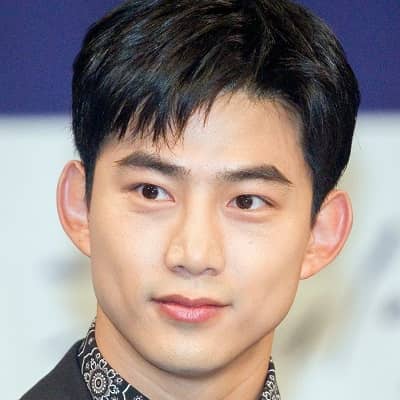 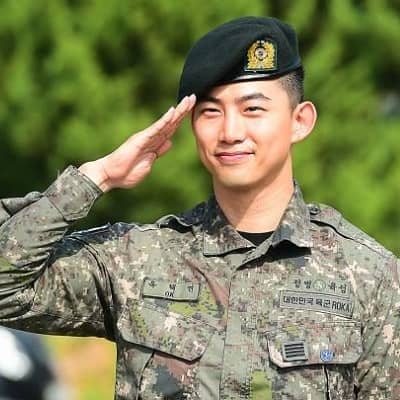 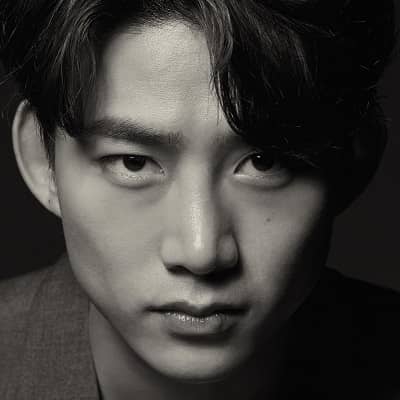 Ok Taecyeon is a prominent South Korean singer-songwriter, rapper, actor, and entrepreneur.  Ok Taecyeon is famous as a member of the boy band 2 PM. He is also a famous actor who has appeared in TV drama series like Dream High, The Game: Towards Zero, Wonderful Days, Assembly, and Vincenzo among many others.

Ok Taecyeon was born on December 27, 1988, and he is currently 33 years old. Taecyeon is a native of Seoul, South Korea, and his zodiac sign is Capricorn. However, at the young age of 10 years, Taecyeon’s family emigrated to Bedford, Massachusetts.

His name is written in his native Korean language as 옥택연 and Hanja as 玉澤演. Moreover, his name is also spelled as Ok Taek Yeon whereas his stage name is Taecyeon. Talking about his family, Ok Taecyeon has an older sister named Jihyen. 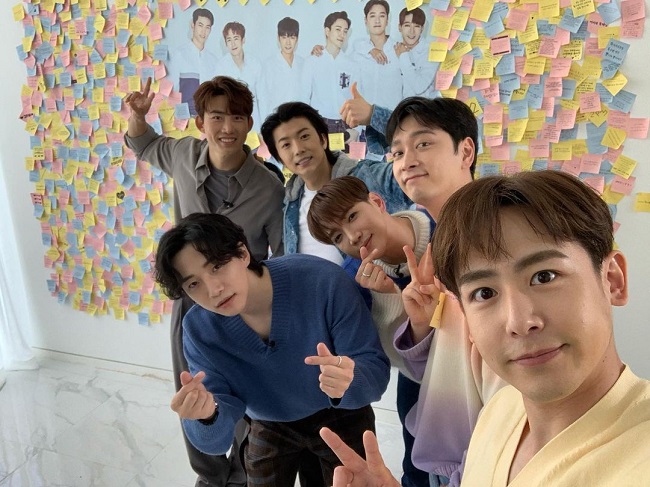 Caption: Ok Taecyeon posing for a photo with the members of 2 PM. Source: Instagram

John was the one who persuaded Taecyeon to participate in a JYP Entertainment audition. His sister had noticed JYP’s promotion when surfing the Internet. Taecyeon reluctantly agreed to participate and hence the Ok siblings headed to New York City on Taecyeon’s 17th birthday.

A week after that, Taecyeon was chosen for the final 35. Subsequently, Taecyeon had to go to South Korea for further competition. Initially, Ok Taecyeon applied to become a model. However, the judges suggested the young man try dancing and singing. He later became one of the dozen finalists which also included his 2 PM bandmates Lee Junho and Hwang Chansung. They had to compete in the show Superstar Survival. However, Taecyeon was also the first one to leave the show.

Ok Taecyeon grew up in Massachusetts for seven years. There, he attended Bedford High School. In this school, he was a member of the Chess Club, Jazz Band, JV Soccer Team, as well as the National Honor Society. Taecyeon later returned to South Korea to pursue his career.

Moreover, Taecyeon is fluent in English, Korean, as well as Japanese. He is also familiar with the use of the Busan satoori (dialect). He showed off his familiarity with this dialect in the drama Wonderful Days.

Ok Taecyeon is a famous rapper, singer-songwriter, actor, as well as entrepreneur. Taecyeon is internationally famous as the main rapper of 2 PM, the South Korean boy group. The singer then made his acting debut with the 2010 drama Cinderella’s Sister.

Since then, the actor has appeared in several TV drama series including Dream High, The Game: Towards Zero, Who Are You?, Let’s Fight – Ghost, Wonderful Days, Assembly, Save Me, and Vincenzo. The singer-turned-actor has also starred in movies including Marriage Blue and House of the Disappeared.

Talking about his journey with the band 2 PM, Taecyeon took part in Mnet’s Hot Blood Men in the year 2008. This program follows the extreme training of 13 trainees to become a member of the boy band “One Day”. It spawned two boy bands namely 2 AM and 2 PM.

After 6 months of Hot Blood’s airing on the television, 2 PM debuted with their first single 10 Points out of 10 Points. It is a single from their first EP “Hottest Time of the Day”. With their second EP “2:00 PM Time For Change”, 2 PM found success in the South Korean music industry. 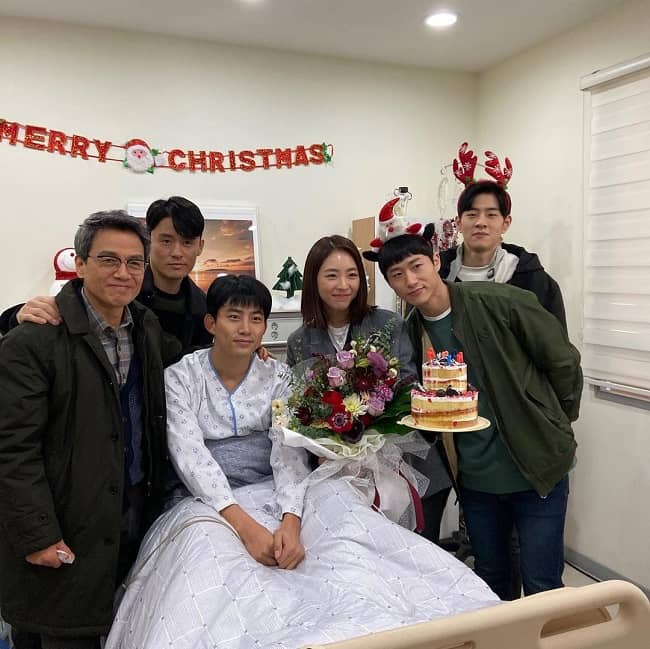 Caption: Ok Taecyeon posing for a photo with the casts of ‘The Game Towards Zero’. Source: Instagram

Ok Taecyeon was then featured in Baek Ji-young’s My Ear’s Candy. It is a 2009 hit song. Then in the year 2012, Taecyeon produced Blue Bears With Taecyeon with his fellow Dankook University alumni students. They performed the album live at Dankook University. This performance was for the university’s matriculation ceremony. They began selling the album in February 2012. , with all proceeds donated back the proceedings to the University.

Likewise, Taecyeon made his solo debut in Japan in the year 2017. It was with the release of Taecyeon Special: Winter Hitori. Then in July 2018, Taecyeon signed an exclusive contract with 51K. It is an agency founded by actor So Ji-sub. He did this after his contract ended with his precious agency – JYP Entertainment. Moreover, JYP reported that Taecyeon will remain a member of 2 PM despite the move.

Furthermore, in the year 2013, Ok Taecyeon was the MC for a 30-minute press conference on Ustream. He introduced “Ok” to the public during this conference. Ok is a green-colored cat character. During the conference, the singer-turned-actor shared the history of his development of the character. Subsequently, he released his sketches to the public. 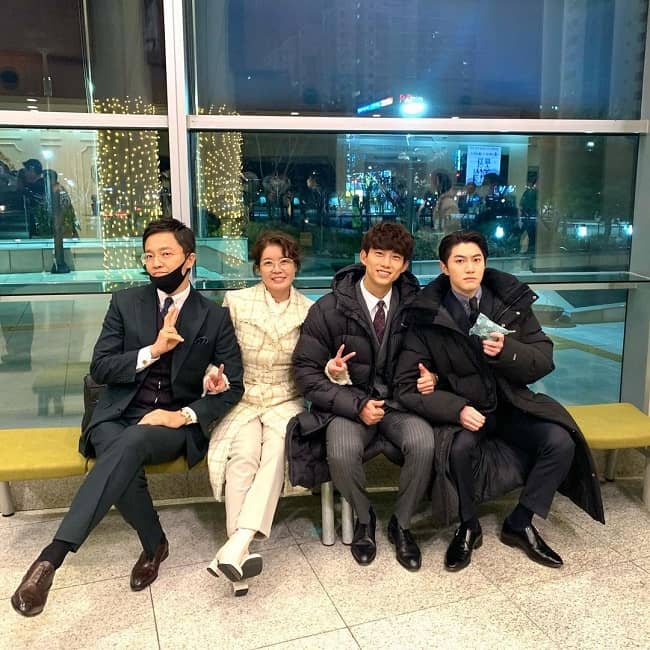 Caption: Ok Taecyeon posing for a photo with the co-stars of ‘Vincenzo’. Source: Instagram

Ok Taecyeon enlisted for his mandatory military service on September 4, 2017. Previously, Taecyeon underwent a physical examination for drafting. However, the result came out that Taecyeon is only sufficient for enlistment as public service personnel. This was because of the singer’s poor vision and a dislocated shoulder that he sustained in 2008.

Then in 2012 and 2013, the singer underwent surgery to correct the disk and also to remove pins in his upper arm from a serious break in 2013. Soon, Taecyeon was cleared for active duty in December 2013. However, due to his busy schedule, Taecyeon delayed his enlistment.

When he finally enlisted for the mandatory service, Taecyeon enlisted as an active-duty soldier. On October 18, 2017, Taecyeon completed his basic military training. Following his training completion, Taecyeon joined the 9th Infantry Division in Gyeonggi Province. He joined as a military instruction assistant. 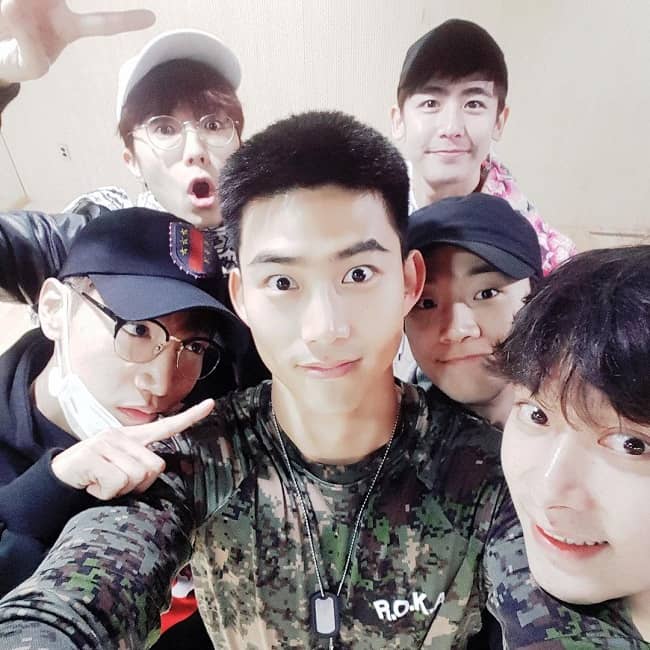 Caption: Ok Taecyeon posing for a photo with his 2 PM members after military service. Source: Instagram

Likewise, in February 2018, the singer participated in various 2018 Winter Olympics events. He participated as one of the volunteers under the Ministry of National Defense (South Korea)’s command. The singer also hosted several cultural shows and concerts. Taecyeon also performed as a member of 2 PM at the Olympic Headliner Show.

Then on 1st October of the same year, the singer led the future combat system demonstration at the 70th Armed Forces Day Celebration. Likewise, the singer ranked #1 on real-time search engines when he led the final salute to President Moon Jae-in. Subsequently, in February 2019, Taecyeon received an early promotion to a Sergeant.

His division commander appointed Taecyeon as a ‘Special Class Warrior’ whereas the Ministry of National Defense awarded him ‘Model Soldier’. Ok Taecyeon then completed his military service on May 16, 2019, and was discharged on the same day. 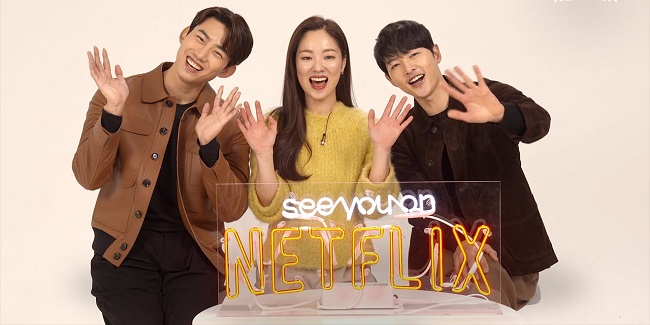 Caption: Ok Taecyeon appearing on a show with the main casts of ‘Vincenzo’ – Song Joong-ki and Jeon Yeo-been. Source: Youtube

Moreover, Ok Taecyeon is single at present. He has not shared any social media posts regarding this matter.

Ok Taecyeon’s height is 186 cm or 6 feet 1 inch and his weight is around 76 kgs or 167 lbs. Likewise, the singer has dark brown eyes and hair of the same color.

Talking about his social media presence, Taecyeon is available on Twitter as @taeccool with over 3.6 million followers since June 2010. Likewise, the singer’s Instagram username is @taecyeonokay. The singer has earned over 1.4 million followers on this account.

We can also get behind the scene updates of Taecyeon on the Instagram account @eyecon_taec which has over 127k followers while writing this. Moving on, Ok Taecyeon has a net worth estimation of approximately $1 million to $5 million US dollars.