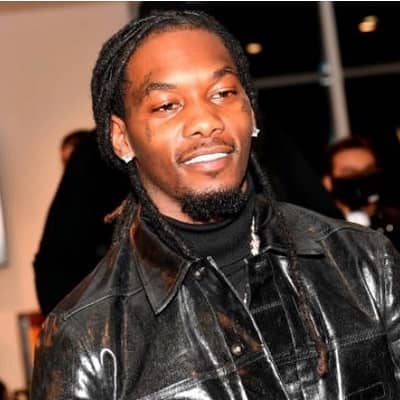 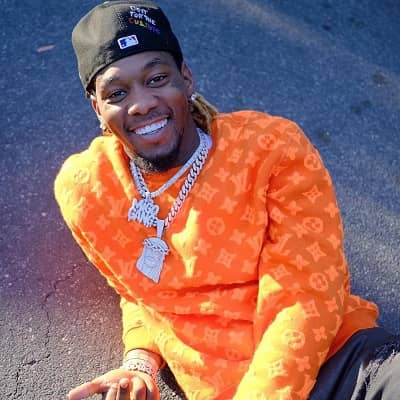 Offset is an American rapper, singer, and songwriter. Offset is a member of the hip-hop trio Migos, alongside his uncle Quavo and cousin Takeoff. He is also an investor in the Esports organization FaZe Clan. Moreover, he came to the limelight as their group Migos reached the height of success in 2013 with the release of their viral hit single, “Versace”.

Kiari Cephus was born on 14 December 1991, in Lawrenceville, Georgia, U.S. His full name is Kiari Kendrell Cephus. He holds an American nationality. Similarly, his age is 31  years and his sun sign is Sagittarius. Offset is Quavo’s cousin, and Quavo is Takeoff’s uncle. The three grew up together in Gwinnett County, a mostly suburban area near Atlanta. There is not much information available about his personal life before he formed Migos along with the other two members of the group. The other two members of the group, Quavious Keyate Marshall (Quavo) and Kirshnik Khari Ball (Takeoff) are his direct relatives. The trio was raised together in Lawrenceville, Georgia. In 2008, Offset formed Migos with Quavo and Takeoff. 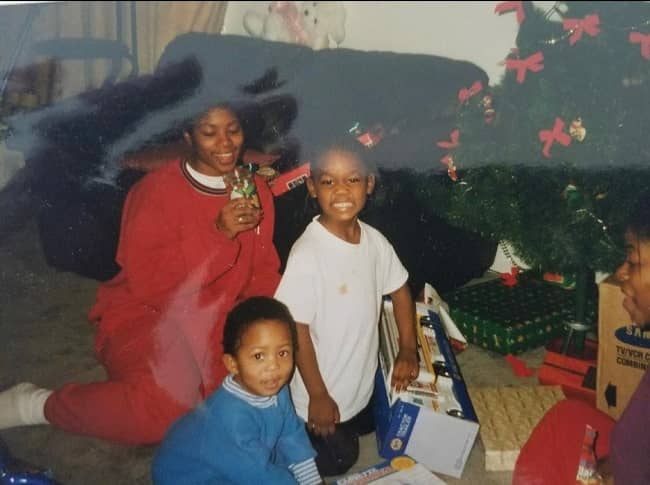 Caption: Offset with his mother and a sibling (Source: Instagram)

Migos initially gained recognition following the release of their 2013 single “Versace”. In 2015, the trio released their debut studio album Yung Rich Nation. In 2017, their single “Bad and Boujee” became an Internet phenomenon, spawning many memes with the lyrics “rain drop, drop top”, which were performed by Offset. The song peaked at number one on the US Billboard Hot 100 chart, with many critics believing Offset commanded the track. In 2016, Offset (including Migos) appeared in an episode of Donald Glover’s series Atlanta.

The episode aired on September 13, 2016, under the title “Go For Broke”. He has also starred in campaigns for the fashion designers Gosha Rubchinskiy, Bryce Barnes, and Lavati. In 2017, the trio released their second studio album, Culture, which debuted at number one on the US Billboard 200 chart. Then, in addition to Migos, Offset has released solo music and collaborated with numerous artists. In June 2017, he was on Metro Boomin’s single “No Complaints” alongside Drake, which peaked at number 71 on the Billboard Hot 100. Then, in September he was together with Macklemore on the song “Willy Wonka”, from the album Gemini.

The offset would eventually release a collaborative studio album with rapper 21 Savage and record producer Metro Boomin titled, Without Warning. The album was out on October 31, 2017, and debuted at number 4 on the US Billboard 200 chart. It spawned the hit song “Ric Flair Drip”, Offset’s first solo platinum single, and the highest charting US Billboard Hot 100 entry as a lead artist to date. Moreover, on February 22, 2019, he released his first solo album Father of 4. The album featured the single “Clout”, with Cardi B, peaking in the top 40 of the Hot 100 at number 39.

In addition, in February 2019, Offset made his debut on Sean Evans’ YouTube series Hot Ones. In August 2019, it was announced that Offset invested in the Esports organization FaZe Clan. Commenting on the investment he said “I love gaming and Esports in the future” said Cephus in a release, “These two facts make it only right that I will be a part of the biggest Esports organization with some of the best players in the world”. He was present in two FaZe Clan videos on YouTube. 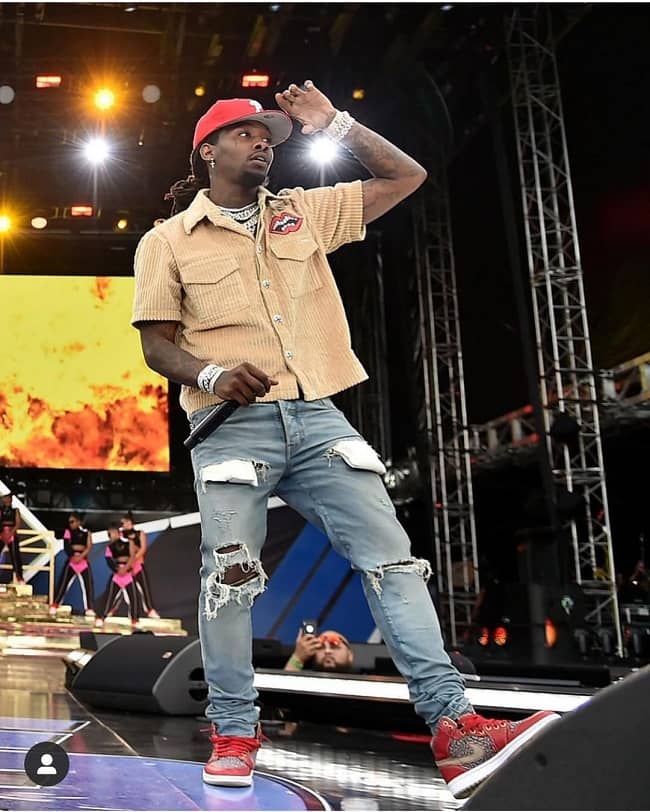 Offset’s net worth is around $26 million. Most of his income source is from his music career. In addition to his music work, Offset has also appeared in several advertising campaigns for fashion designers and brands like Gosha Rubchinskiy, Bryce Barners, and Lavati. According to the critics, if the members of Migos can handle their fame and money properly, they can become the next big thing in the hip-hop arena. In December last year, it was out that Cardi B and Offset had purchased a house around the Atlanta area for a massive $5.5 million.

It is a 22,000-square-foot house that is spread over six acres. It has 5 bedrooms and 11 bathrooms. The house was $10 million in 2017. In addition, as a birthday gift for her husband, Cardi B surprised him with the keys to a very rare Lamborghini. The car that Cardi B gifted him is Lamborghini Aventador SVJ 63 Roadster. According to a report by complex.com, the SVJ Lamborghini price is around $573,000 to $600,000. Offset could not control his excitement when he saw his precious gift from his wife

In 2017, Offset started dating American rapper Cardi B. On October 27, 2017, he proposed to her at a live performance at Power 99’s Powerhouse in Philadelphia, Pennsylvania. On April 7, 2018, Cardi B revealed on Saturday Night Live that the two were expecting their first child. Offset is the father of four children: sons Jordan and Kody and daughter Kalea from early relationships, and a daughter with Cardi B, named Kulture Kiari Cephus, born July 10, 2018. Cardi B and Offset married privately on September 20, 2017. Then, on December 5, 2018, Cardi B announced on Instagram that she and Offset had broken up. This is after Offset allegedly was cheating on Cardi and his sex tape was out. The couple recorded and released the song “Clout”, in 2019. 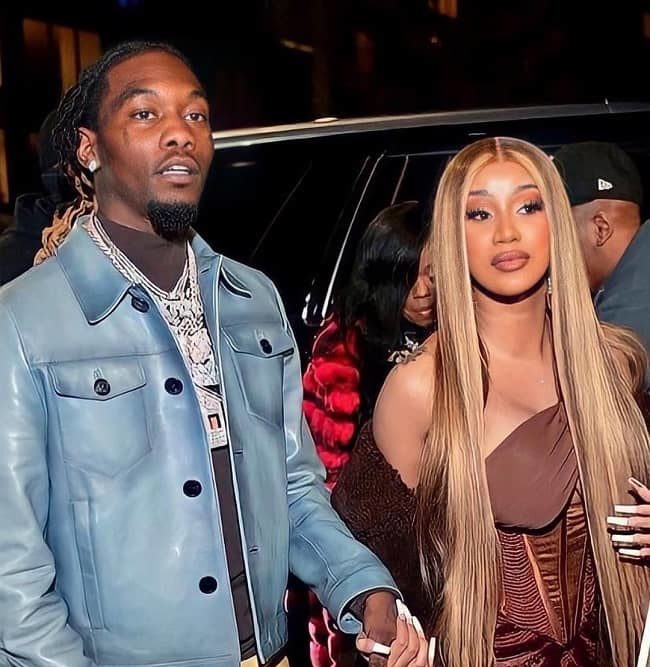 Caption: Offset with his ex-wife, Cardi B (Source: Instagram)

Offset seems to have regular problems with the law enforcement agencies, though he has been trying to stay sober since his release in 2015. Kiari Cephus’s first big brush with controversy happened when the hip-hop trio along with 12 other associates of Migos was arrested for possession of marijuana and firearms, in April 2015, which also resulted in the postponement of Migos’s Yung Rich Nation Tour. In May 2015, Offset received severe additional charges for attacking an inmate in the custody. Finally, he was out in December 2015 after accepting a plea deal. He had to pay a fine and is currently serving 5 years of probation as well as banishment from four counties.

However, this did not end the legal issues in his life. In 2016, he was booked for driving without a proper license. Then, in January 2018, Offset was criticized for rapping a line that includes the lyrics “I cannot vibe with queers” in his feature on YFN Lucci’s “Boss Life”. After the lyric was understood as homophobic he apologized saying he did not intend for his use of the term “queer” to be directed at the LGBT community. His wife, Cardi B, said that Offset did not know the term “queer” had a homophobic history. He has mentioned that he assumed the lyric was using the definition of “queer” which is defined as eccentric and odd.

Talking about Offset’s body measurement, he has an average body type. He is 5 feet 10 inches tall and weighs 70 kg. Moreover, he has a pair of dark brown eyes with black hair. Kiari has a dark complexion with shoulder-length hair. Furthermore, information regarding his body measurements, dress size, and shoe size are still missing.