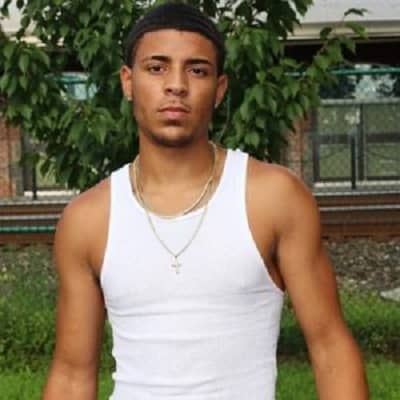 Noah Jacob was born on February 1, 2001, and is currently 21 years old. Jacob was born and grew up in New York, United States. Young Youtuber Jacob is a private person and hasn’t shared much about his parents. However, he has a brother named Nilus Jacob who also has a popular Youtube channel called The Real Nilus. Noah Jacob with his brother Nilus on his brother’s channel (Source: Youtube).

Noah opened his YouTube channel on July 23, 2016. Noah posted his first video long after creating his channel. The first video that he posted was a reaction video and after posting his first video, he was regular in posting videos. He started uploading several reaction videos on TikTok compilations of social media stars. Many of Noah’s prank and challenge videos were posted on his friend Nej D’Lux’s channel. Noah posing with his gold play button which he got for Noah Jacob’s TV channel (Source: Instagram).

Many of his challenge and prank videos were uploaded on his friend Nej D’Lux’s channel. He ultimately became a part of Nej D’Lux’s channel and after some months, Noah even deleted his previous channel. Later, on 29 January 2017, he again created a Youtube channel “Noah Jacob Tv”.
Some of his popular uploads on this channel are”J cook Finds out He Is NOT The Father Of His Daughter! REACTION! ” with more than 344K views and  ” Exposing Catfishes On Tik Tok Compilation…” with 314K views. Likewise, ” Offset Admits To Cheating On Cardi B Multiple Times!” with around 302K views. “Mother Exposes Daughter On Instagram Reside” was his first video that gained over 1 million views. Young Jacob has been successful in gaining a lot of fame at a young age through his work and dedication.

The young YouTuber has been quite diligent and successful in his YouTube career to date and has gained over 1.32 million subscribers on YouTube. Jacob’s net worth is estimated at proximately $100,000.

Recently, he is single and there is no update about his relationship. He has dated Kayani B who is also a YouTuber. They have several videos together when they were dating like prank videos, guessing videos, and also played the ‘Never Ever Have I’. They looked cute in the video. Sadly, they broke up and even posted a video announcing their break-up.

Even though they broke up, they are still friends and appear in many of Noah’s videos. In 2019 he posted a video titled ‘I Saw My Ex At Graduation!’ where Kayani appeared. Even Noah’s brother set up a blind date for Noah and Kayani and posted it on his channel. Though they aren’t dating now we can say they are good friends.

Young and smart Jacob is quite good-looking and looks fit too. He looks tall and has a height of five feet and seven inches. He has beautiful brown eyes with black hair. Being a popular YouTuber, he looks great and active too. Jacob has quite a good fan following on his social media. As a YouTuber, he has 1.32 Million subscribers on his channel “Noah Jacob Tv” and around 696K subscribers on “Noah Jacob Vlogs”.  He is also active on Instagram where he has 155k followers and has posted 19 posts.