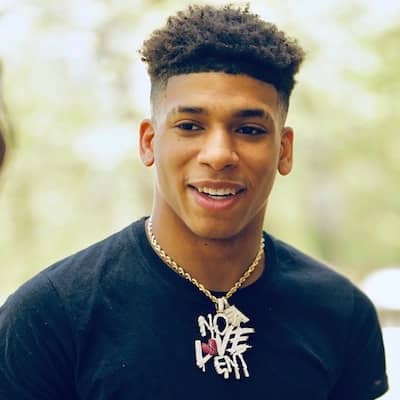 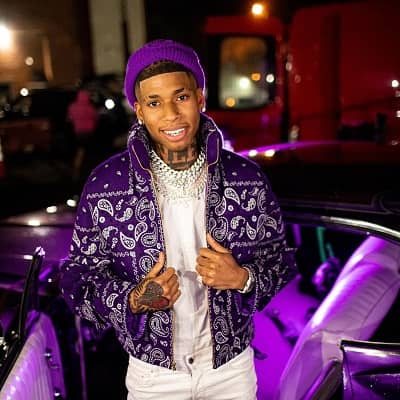 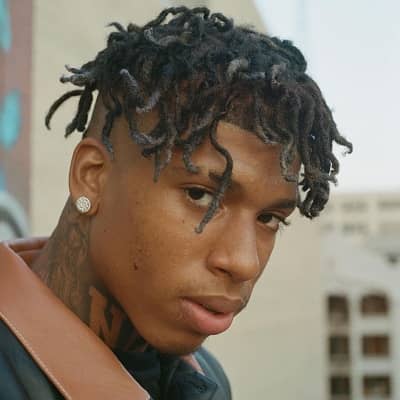 NLE Choppa is an American rapper, singer, songwriter, and Internet personality. NLE Choppa rose to fame with his January 2019 single “Shotta Flow”, which was certified platinum by the RIAA and peaked at number 36 on the Billboard Hot 100.

The talented artist was born on November 1, 2002, in Memphis, Tennessee, USA. NLE Choppa real name is Bryson Lashun Potts. He holds an American nationality and follows Christianity. Similarly, his age is 18 years old and his sun sign is Scorpio. His nickname is Baby Mexico. Potts was born to a Jamaican mother and an African-American father. His mother’s name is Angela Ellis Potts. He is close to his mother Angeleta Ellis Potts who managed his early career. He was raised in Memphis, Tennessee in the Parkway Village area and also was enrolled in Cordova High School as a former Shelby County Schools student.

In his childhood he was interested in playing basketball, however, he could not focus on basketball as he often got himself into trouble. At the age of 14, he started rapping along with his friends. After turning 15, he released his debut song ‘No Love Anthem’ under the stage name ‘YNR Choppa’. In December 2018, he appeared in a music video titled ‘No Chorus pt 3’ which received a positive response on the internet. Choppa’s opening verse and dance moves earned him fans on social media.

NLE Choppa’s manager is his mother, Angela Potts, who has been managing him since he started expressing an interest in rap music. He released his first song, “No Love Anthem”, in February 2018 under the name YNR Choppa. On July 22, he released his debut mixtape, No Love the Takeover. In December, he appeared on “No Chorus Pt. 3”, a cipher-style song by his Shotta Fam collective. His opening verse and his dance moves in the accompanying music video made him stand out from the group, earning him an online buzz.

After the surge of popularity, he released his breakout single “Shotta Flow” a week later. A few days after its release, Pitchfork highlighted the track as its Song of the Day, praising his energetic delivery and adding that “he hits a new dance move every time the camera cuts back to him”. The song entered the Billboard Hot 100 in May 2019, debuting at number 96. It later peaked at number 36. The official remix, featuring Blueface, directed by Cole Bennett, was released in June, shortly after the original song was certified platinum by the RIAA.

In February, he released the song’s sequel, “Shotta Flow 2”. The video received 20 million views within two months, prompting Carl Lamarre from Billboard to say that his “recent dominance has silenced any detractors”. It was around this time that it was reported that Choppa had sparked a bidding war between a handful of top record labels, with bids reaching a reported $3 million. He turned these offers down, however, to instead sign with the independent distribution company, UnitedMasters, while keeping his master recordings and publishing.

In March, he released a new single called “Capo”, with the music video debuting on Worldstarhiphop. Also in March, he was featured on Birdman and Juvenile’s song “Dreams”. In April 2019, he released another single called “Birdboy”, produced by SGULL. In May, Choppa released a new single, “Blocc Is Hot”, produced by ATL Jacob. It was made as a tribute to his favorite childhood rapper, Lil Wayne. A few days later, he made his music festival debut by performing at the Beale Street Music Festival in Memphis. Bob Mehr of The Commercial Appeal praised his act.

On June 14, 2019, he released the single, “Free YoungBoy”, produced by CashMoneyAP. The title of this song is a reference to rapper YoungBoy Never Broke Again, who was arrested for shooting and because he violated his parole. This song was the first release from his own label No Love Entertainment (NLE), which he launched in partnership with Warner Records. According to Billboard magazine, No Love Entertainment is slated to release new music from him. On September 13, 2019, he released a new single titled “Camelot”. The song peaked at number 37 in the US, becoming his second Top 40 hit, following “Shotta Flow”.

On December 20, 2019, he released his debut extended play titled Cottonwood. The EP, named after the area he grew up in, features the previously released singles “Side” and his breakthrough hit “Shotta Flow” with its remix, featuring Blueface. The EP also consists of a collaboration with Meek Mill. To accompany the release of Cottonwood, a short film of the same name was released on the same day. His debut studio album, Top Shotta was initially set for release in early 2020 and was preceded by multiple singles.

On March 19, he released the album’s lead single “Walk Em Down” with Roddy Ricch. On June 12, 2020, he released “Shotta Flow 5”, the fifth sequel to his 2019 single “Shotta Flow”. The single “Narrow Road” featuring Lil Baby released on July 30. One week later, on August 7, Top Shotta was released. On August 11, 2020, he was included in XXL’s 2020 Freshman Class. Then, on September 5, 2020, he vowed to stop rapping about violence, stating he has more to talk about and wants to “spread positivity and wake people up”. On October 15, 2020, he announced a new project titled From Dark to Light, which was released on November 1, his birthday.

The mixtape’s cover art sees him sitting with his legs crossed in an outside setting, with butterflies around him and a rainbow in the distance; a nod to his new spiritual journey. In August 2020, Potts later announced the release of “Shotta Flow 6”, which will feature Lil Wayne, and supposed to be releasing soon. He is noted for his “animated vocals” and energetic rapping, which he notably employed on his breakout single, “Shotta Flow”. His sound has also been described as “melodic”, albeit “heavy-hitting”. Jessica McKinney of Complex magazine stated he usually has a “wild and rambunctious” delivery in his verses. As a child, he listened to YGK and Lil Wayne, however, he recalls listening “to a lot of unreleased music all around the city [of Memphis]”. 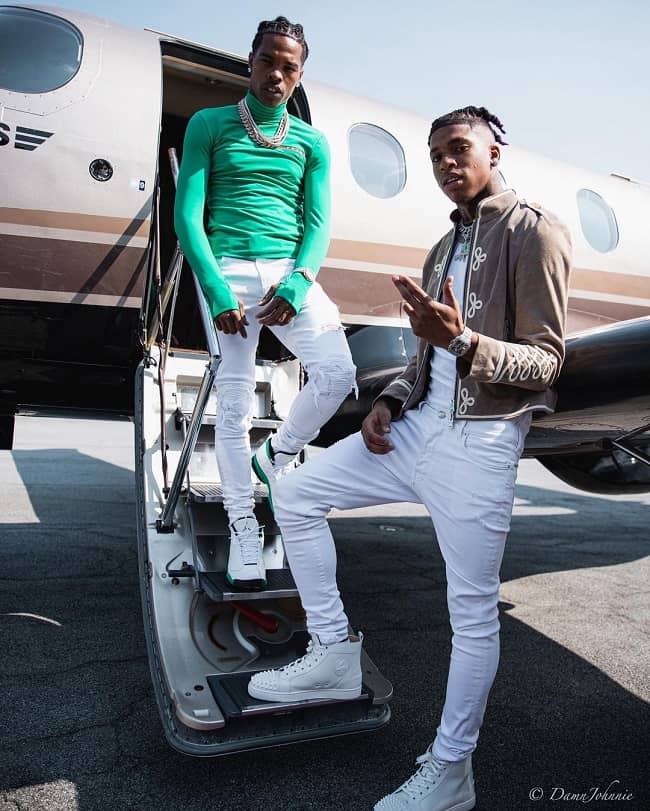 As a talented artist, NLE Choppa has earned a huge amount of money at a very small age. He has gained a net worth of $300,000 US dollars. He is quite young and has progressed and is earning so many. It is a very good sign that he will have a great future. His primary income source is from his music career, the sponsorships, and also partnerships he gets.

On June 20, 2020, NLE Choppa welcomed his first child, a daughter. He stated that having a child on the way changed his mindset; “I knew I needed to change and be a better person for my daughter”. He has most recently apologized to his ex-girlfriend and mother of the child. Late May, he accused his girlfriend of not only keeping his child away from him but not even telling the rapper what the child’s name is.

On May 26, the 17-year-old tweeted, “Damn can I at least know the name of my baby?” He also revealed his baby’s name: Clover! “Wanna apologize for certain things I said toward the mother of my child. No, we not together but we both know how important it is to have positive vibes around the baby. So ready for this girl to change the perspective on my life. Can’t wait till I meet you clover, ON GRAPE”. 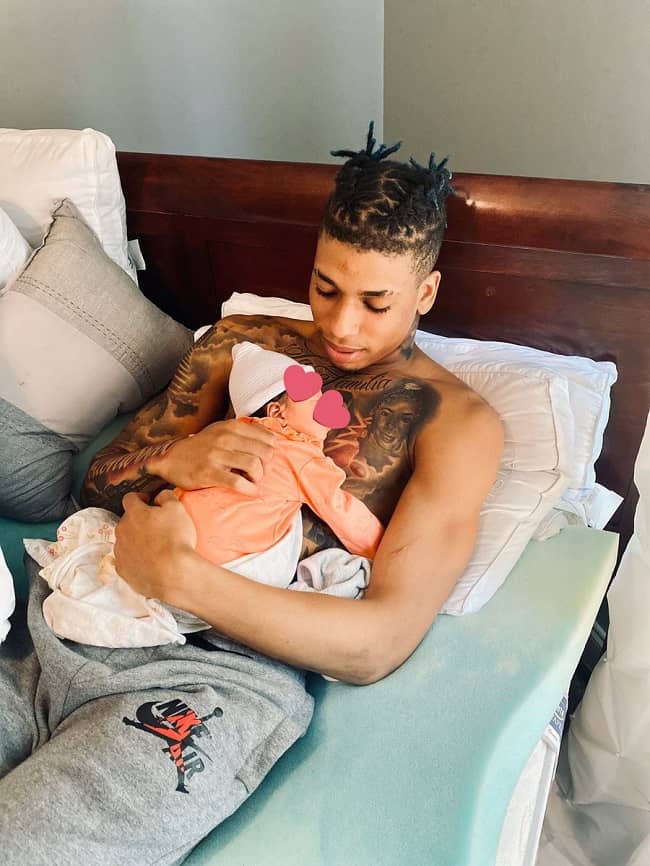 Potts has said he struggled with depression and often raps about this in his music. He meditates in order to deal with mental health issues and the pressures of being a young entertainer. He was banned from Instagram in early 2020, something which he said “grounded” him. During an unspecified time, NLE Choppa served time at a juvenile detention center. He has never revealed what he was arrested for, but he said his time in detention motivated him to turn his life around. In an episode of his YouTube series The Rise of NLE Choppa, he said that being in detention helped him a lot and was an “eye-opener”.

Regarding the rapper’s body measurement, he is 6 feet 1 inch tall. NLE Choppa has a weight of 75 kg. Similarly, he has a body measurement of 40-32-33 inches. Potts wears a shoe size of 10 (UK). Also, the size of his biceps is 13 inches. He has a lot of tattoos on his body. Moreover, he has a pair of black eyes and black hair. The rapper has a slim body type and is very young.