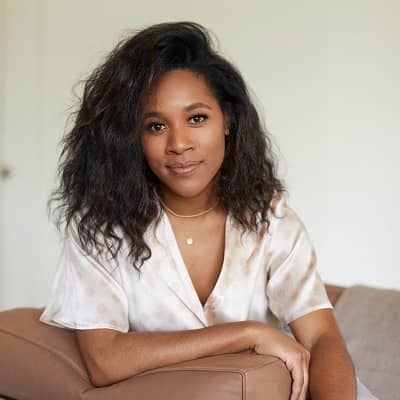 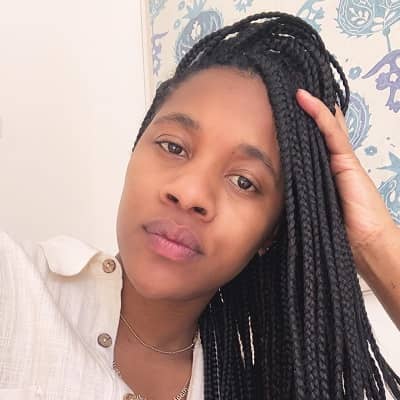 Nina Earl is an American athlete and celebrity wife. Nina Earl is a college former basketball player and the wife of NBA player Russell Westbrook. Likewise, she is the founder of Little Ark.

Nina Earl was born on 16th January 1989 and is currently 33 years old. Her birth name is Nina Ann Marie Earl. Being born in mid-January, her zodiac sign is Capricorn. Likewise, Nina was born in Pomona, Upland, California, United States of America, and holds American citizenship. Similarly, talking about his ethnicity and religion, she belongs to an African-American ethnic group and follows Christianity. Likewise, speaking of her early childhood and family background, Nina is the daughter of Michael Earl and Jennifer Lyons. Her father Michael Earl is a famous puppeteer, puppet builder, actor, voice actor, and songwriter. Similarly, her mother Jennifer Lyons has worked as an American film actress. 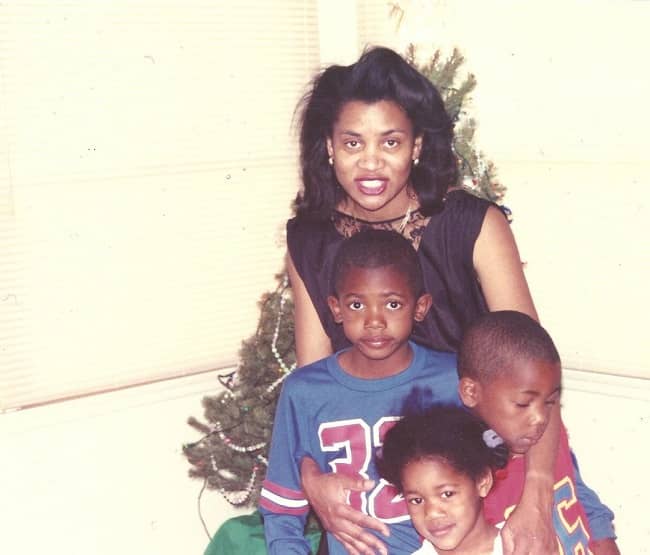 Caption: Childhood pictures of Nina with her mother and siblings. Source: Instagram

Likewise, talking about her siblings, Nina is the only sister to three brothers Michael Earl Jr, Jonathan Earl, and Benjamin Earl. Similarly, ‘Pro Football Hall of Fame’ safety Kenny Easley is her cousin. Ever since childhood, Nina has been active in sports and is a good athlete. However, besides sports, she also displays a keen interest in music and food. Similarly, she has multi-talent and can also communicate well in sign language.

Furthermore, talking about her educational background, Nina is a college graduate. Nina went to Diamond Ranch High School in Pomona, California. Followed by this, she went to the University of California, Los Angeles in which she took major in Psychology with a minor in English Literation in the year 2011. Likewise, later she did a master’s degree in Clinical Psychology with a specialization in marriage and family therapy from the same university.

Nina has been an active basketball player and also was in her high-school varsity team. Likewise, while concluding her high-school career, she made an exceptional performance of 2,291 points, 906 rebounds, 298 assists, and 544 steals. Similarly, she became a 4-year varsity basketball letter winner and received an athletic scholarship to ‘UCLA’. Being a UCLA freshman, she eventually promoted to be on the first ‘All-American’ team and made participated in the 2006 ‘CIF 3AA’ championship. Similarly, her freshman career includes 27 games and an average of 15 points improving in subsequent years.

Likewise, followed by this, she became the ‘CIF Player of the Year’ and ‘Cal-Hi Sports All-States’ twice in her career. Similarly, she became the three-time league ‘Most Valuable Player’ title winner. Besides this, she has also made active participation in track and field activities and has also won the ‘Adidas Tournament of Champions’. Moreover, at present, Nina is the founder of ‘The Little Ark’ which is a community helping children and their parents spend some quality time together.

Talking about her net worth and earning, Nina is an athlete and has her primary source of income from her basketball career. Likewise, she has been making a decent amount of earnings as well as impressive fame from her basketball career. Similarly, talking about her net worth, she has a net worth of around $50 million. However, there is no information about her asset values available in the media.

Regarding her relationship status, Nina is straight and in a marital relationship with her loving husband Russell Westbrook. Russell Westbrook is a popular NBA player. They both met each other since their UCLA days and both of them have played for the University’s basketball team. Similarly, they started dating in 2007 when Russell made a proposal to Nina with a beautiful solitaire worth $700,000 on 3rd September 2014. Moreover, the six-piece elongated cushion-cut diamond ring was an exclusive piece from the celebrity jeweler ‘Jason of Beverly Hills’.

Similarly, after dating for years, they tied the knot on 29th August 2015. It was a star-studded event held at the famous ‘Beverly Hills Hotel’ in which she wore a gorgeous dress on her wedding day. This dress was specially made by Vera Wang and second, was made by popular designer Monique Lhuillier. Likewise, the guest list includes celebrities including Keri Hilson and also Grammy-winner Miguel also made a surprise visit to the couple with a performance. Moreover, ‘People’ magazine made cover the entire wedding. 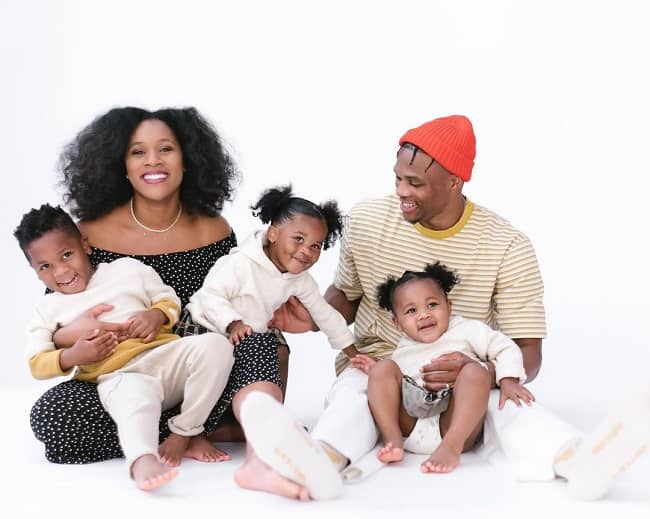 Caption: Nina with her husband and children. Source: Instagram

Similarly, the couple is blessed with their first son Noah Russell Westbrook on 16th May 2017. Likewise, after a year, they welcome their twin girls Skye and Jordyn.

The gorgeous athlete stands 5 feet 1 inch (73 inches) tall and weighs around 80 kg (176 lbs). Likewise, she has a slender and fit body type being an athlete. However, there is no information about her vital stats available in the media. Similarly, looking at her physical appearance, she has dark skin with black pair of eyes and black hair color.