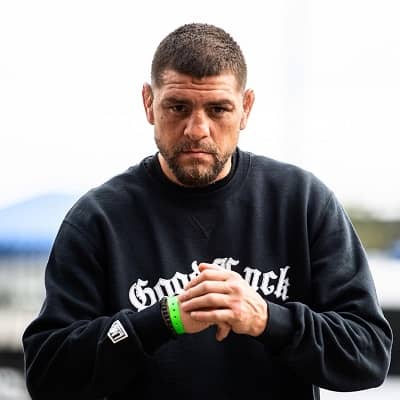 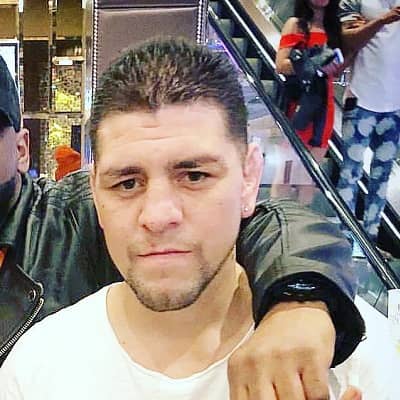 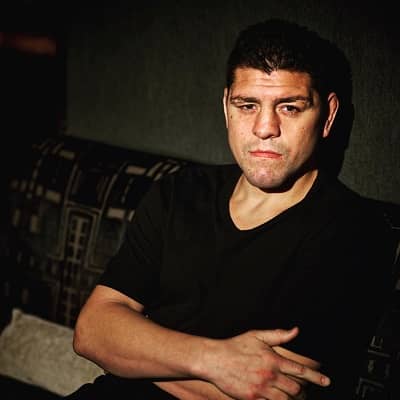 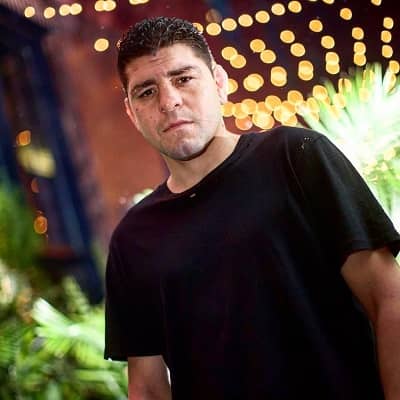 Nick Diaz is a prominent American mixed martial artist. Nick Diaz is a 3rd Degree Black belt in Brazilian Jiu-Jitsu since May 2007. He has also appeared in ‘Fight Life’ with his brother, Nate.

Nick Diaz was born on August 2, 1983, and he is currently 38 years old. His full name is Nickolas Robert Diaz. Likewise, he hails from Stockton, California, United States, and his zodiac sign is Leo. Talking about his family, he has a younger brother named Nathan, and a younger sister named Nina. Her mother mostly raised the three siblings.

His mother’s name is Melissa but his father’s identity is not shared as he was not around much while growing up. From a very early age, he began training in karate and aikido. Young he also took part in wrestling tournaments during his teenage years.

Talking about his educational journey, he attended Tokay High School which is located in Lodi, California. However, Diaz attended the school only for a year and dropped out afterward. He was a member of the swim team when he was a freshman.

At the young age of 16 years, he started training in Sambo under Valeri Ignatov. Valeri is a Bulgarian National Sambo Champion. Around the same time, young he started training mixed martial arts under Steve Heath. He decided on this after he saw Renzo Gracie in the UFC. He trained at the Animal House gym prior to joining Cesar Gracie’s team. Cesar Gracie promoted him to black belt in Brazilian jiu-jitsu on May 8, 2007. 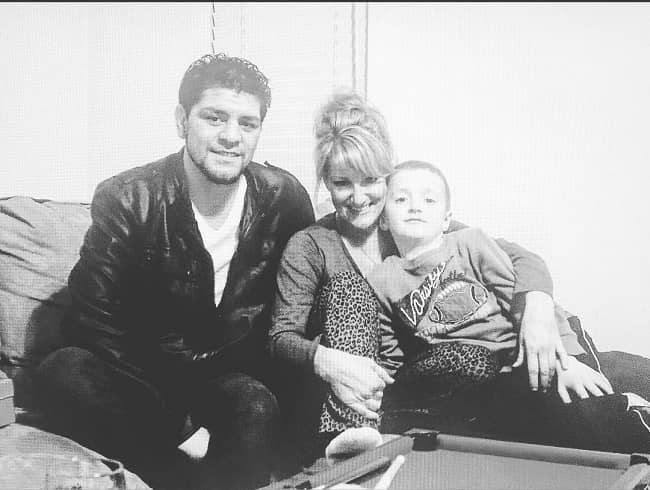 Caption: Nick Diaz posing for a photo with his mother. Source: Instagram

Professionally, Nick Diaz is a famous mixed martial artist. He started his professional career in the year 2001. Since then, he has competed in UFC, World Extreme Cagefighting (WEC), PRIDE, Shooto, EliteXC, Strikeforce, as well as DREAM. The MMA fighter is a former welterweight champion in IFC, Strikeforce, and WEC.

At present, he teaches Brazilian jiu-jitsu with his brother Nathan. The two work together in Lodi, California. The siblings are also advocates for cannabis and are also long-time vegans. Similarly, the MMA artist also appears in the feature-length documentary Fight Life released in 2013.

This documentary chronicles the lives of mixed martial artists outside the cage. James Z. Feng directed this documentary and he is also an independent filmmaker. Moreover, James also won the “Best Documentary Award” at the United Film Festival.

Furthermore, he is the first winner of the Strikeforce Welterweight World Title in the year 2009. The MMA fighter defeated Jeremy Jackson via Submission at UFC 44 in September 2003, Koji Oishi via KO at UFC 53 in June 2005, Robbie Lawler via KO at UFC 47 in April 2004 and Drew Fickett via TKO at UFC 51 in February 2005. 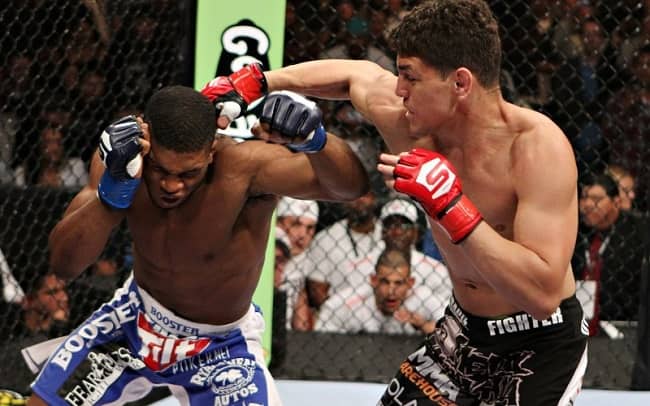 Under Cesar Gracie, Nick Diaz is a Brazilian jiu-jitsu black belt. He is talented both in gi and no-gi jiu-jitsu. US Purple Belt Open in 2004 and a Pan-American Brown Belt Medium Weight Division title in 2005 is among the major titles he has bagged.

Moreover, he also owns a victory over Jorge Patino. Jorge is a renowned grappler who he defeated in a competition via kneebar. The MMA fighter is also popular for having a modified BJJ style that suits his MMA career. Moreover, he lists his favorite submission as the kimura.

The MMA fighter is also a professional boxer. He fights in the Super Middleweight weight class. He then made his professional debut in boxing in April 2005. This debut fight was against Alfonso Rocha. The fight was organized at the Radisson Hotel in Sacramento, California.

He won the fight by unanimous decision after four rounds. However, he has not fought since in this field. The MMA fighter and his brother were trained by Luisito Espinosa. Luisito is a former WBA and WBC World Champion. Moreover, the siblings trained with Jason “Gumby” Schrumpf. He also trains in sambo with Val Ignatov. Val is a former UFC fighter.

Moreover, he displays an unusual boxing style for MMA. He relies upon volume punching without full power. The MMA fighter also occasionally adds in hard punches. CompuStrike tabulates statistics from MMA fights. It has shown he attempted 181 strikes in one round. This makes it the most total strikes thrown in any round that CompuStrike has recorded.

Furthermore, he is also popular for talking trash to his opponents during fights. The MMA fighter also competes in triathlons for recreation. He also uses his endurance and constantly puts pressure on his opponent. The American martial artist also pushes the pace of the fight. 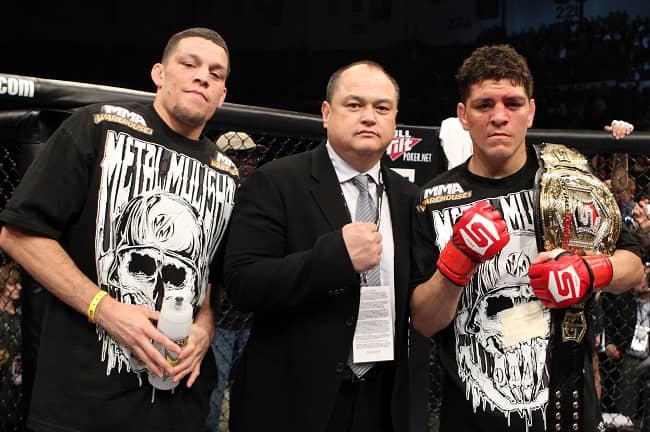 Caption: Nick Diaz and his brother Nate posing for a photo after his winning fight. Source: Bleacher Report

On 25 May 2018, there was a report that the authorities arrested Nick Diaz the day earlier. He had been charged with two counts of domestic battery, a felony for strangulation, and a misdemeanor battery charge. On 30 August 2018, there was another revelation that the charges against the MMA artist were dismissed in July 2018. This was when a grand jury opted not to indict him after there were inconsistencies found with the complainant’s story.

Nick Diaz is most probably single at present. He has not shared any social media posts that might indicate his current love affairs and relationships. Talking about his past relationship, he was in a romantic relationship with Stephanie. Unfortunately, before his debut in a professional MMA fight, Stephanie committed suicide by walking in front of traffic. After her death, he went to Stephanie’s grave every day. The MMA fighter told his lover that he would become the fighter she always wanted him to be.

Nick Diaz stands tall at an approximate height of 6 feet 1 inch or 185 cm. Similarly, the MMA fighter has a bodyweight of 77 kgs or 170 lbs or 12 stone. He has a chest-waist-hip measure of 42-33-35 inches and he wears shoe size 11 as per the UK standards. Moreover, the MMA fighter her brown eyes and hair of the same color. 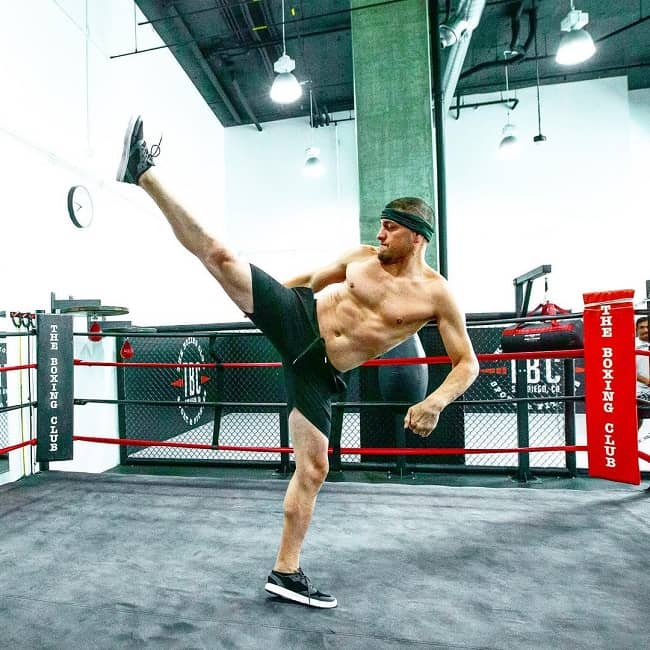 Talking about his social media presence, Nick Diaz joined Twitter in May 2009 and so far has over 604.7K followers on his @nickdiaz209 account. Likewise, he is available on Instagram under the username @nickdiaz209.

As of April 2021, the MMA fighter has shared exactly 1,449 posts and earned over 1.5 million followers on his official Instagram account. Likewise, he is also available on Snapchat under the username @diaz5150nick. Moving on, he has a net worth estimation of around $3 million US dollars.