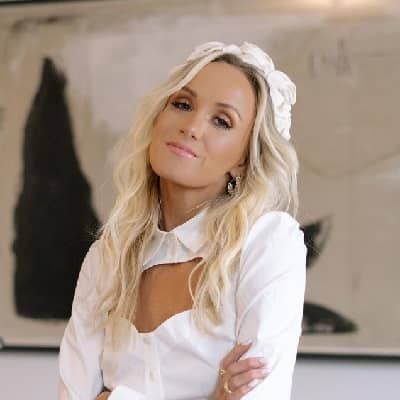 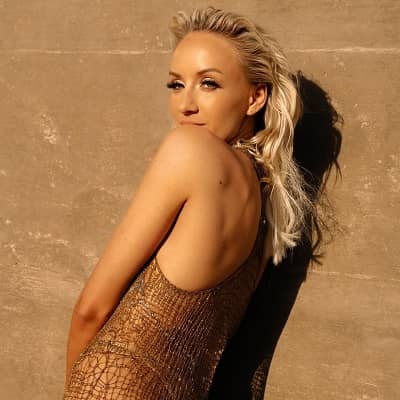 Nastia Liukin is a Russian-American former artistic gymnast and social media influencer from Russia. Nastia Liukin is the Olympic All-Around champion of the year 2008 who has won several medals throughout her whole career.

Nastia Liukin’s birthdate is 30th October 1989 and her birthplace is Moscow, Russia. Her birth name is Anastasia Valerievna Liukina and she is an American native. Likewise, Nastia’s zodiac sign is Scorpio and she has been following the Russian Orthodox religion.  As of 2022, Nastia is thirty-two years old and she is the only child of her parents. The name of Nastia’s parents is Valeri Liukin and Anna Kotchneva. Both of them are former Soviet gymnasts and also members of the Russian Orthodox Church.

After retiring, the family went to the state of New Orleans and to Texas where they are still living. Being the only child of the gymnast’s parents, she grew up watching their gymnastics. Soon, Nastia also started growing interest in sports. By the age of three, she had started taking training and was also showing her abilities on the bars. In the year 1994, her dad worked with fellow Soviet gymnast Yevgeny Marchenko and formed an academy, the “World Olympic Gymnastics Academy” in Texas. At the age of six, Nastia took part in her 1st competition.

Liukin was taking her studies and career as a gymnast together very well. In the year 2007, after completing her high school at the Spring Creek Academy, she went on to join the Southern Methodist University. There she studied international business. At that time, Nastia was already a popular athlete. Nastia was looking forward to studying more but her career as a gymnast did not allow her. However, after some time, she went on to study sports management and psychology at New York University. 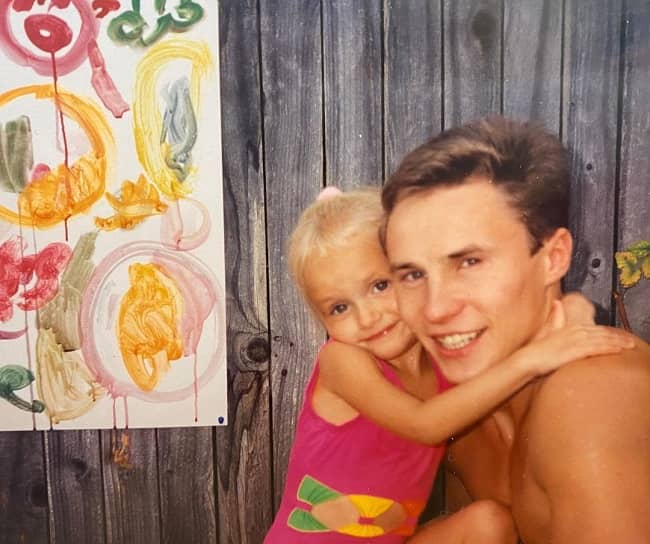 Caption: Nastia Liukin with her father when she was young (Source: Instagram)

Nastia’s parents at first were disagreeing with her building an interest in gymnastics but she gained a lot of popularity in a short time. Then, at the age of twelve, Nastia took part in the ‘National Championship’ as a junior for the first time but did not give her best. Then, she kept on trying more and after competing in several competitions, she went on to reach the fifteenth position. This even set up a spot for Nastia on the US National Team. Nastia Liukin signified the United States in the “Junior Pan American Championships” in the year 2002, where her team won a gold medal.

Then in several individual competitions, Nastia won 3 silver medals, one on the irregular bars, and the other two on the balance beam and the all-around occasion. Nastia became one of the toughest junior gymnasts in the junior type of the “US National Championships”. Then, Liukin got gold medals on the uneven bars, the balance beam, and also in the floor exercise. However, in 2004, Nastia wasn’t age-eligible to be suitable for the U.S. Olympic team, so she wasn’t able to take part at that time. In the year 2005, she became the winner of the U.S. senior national title.

At the world championships of the same year, Nastia achieved gold on the uneven bars, and balance beam, and silver on the floor exercise. The American gymnast once again became the winner of the U.S. title in the year 2006. Sadly, Nastia sprained her ankle at training camp just earlier than the world championships of the year 2006. Though Liukin was capable to take part just on the uneven bars, she gave the best of her one-event presence and won the silver medal, together with the team silver.

After going through an ankle surgery, she returned to form at the world championships of 2007, achieving gold medals on the balance beam and in the team competition and also a silver medal on the uneven bars. Liukin even was 5th all-around, presenting to the world that the title was too within grasp. At the Olympic Games of the year 2008 in Beijing, she was the winner of 5 medals, adding the individual all-around gold. Then, she got the silver medal on the balance beam and a bronze on the floor exercise.

She took her team to the silver, making the U.S. women’s 2nd following Olympic team silver medal. At the time of her signature program, the uneven bars, Nastia and Chinese gymnast, He Kexin knotted for the highest score. After the tie-breaking system, He Kexin got the gold medal, and Nastia got the silver. Though Nastia wasn’t happy to lose on the uneven bars, her 5 medals lead her to be the most successful gymnast in the Games in Beijing. Also, the Women’s Sports Foundation gave her the name of the Individual Sportswoman of the Year in October.

After then, Nastia was in great demand and tailed up her Beijing successes with several presences and commercial ventures. Also, after taking part in numerous gymnastics occasions in the year 2009, Nastia took a close 3 years to break from the sport and returned in the year 2012 with a challenge to create the U.S. Olympic team. However, Nastia was unsuccessful to succeed for the team and finished her competitive career as a gymnast in July 2012. In the year 2018, Nastia was invested in the International Gymnastics Hall of Fame. There is also an autobiography by Nastia Liukin the name, “Finding My Shine” (2015). 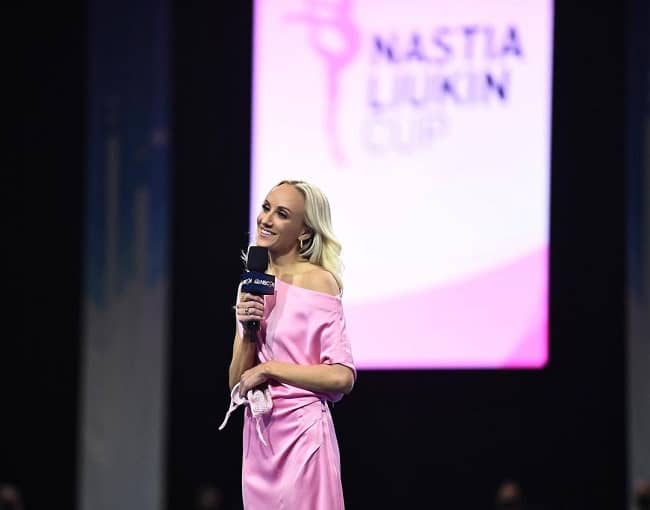 The American-Russian gymnast has been earning an impressive amount of fortune in her professional career as a gymnast. Nastia Liukin’s recent estimated net worth must be 2 million dollars. Nastia Liukin has won several competitions from which she must have gained some money too. Likewise, Liukin as of now is earning money by appearing in several shows, and events, and also through various brand sponsoring.

Nastia Liukin dated amazing athlete, Matthew Lombardi for a long time. Matthew Lombardi is a Canadian former ice hockey center. In June 2015, it was declared that Nastia and Matthew did their engagement through her Instagram account. However, in November 2018, fans got to know they had already parted away.

After a year, she hit the red carpet at the ESPYS in 2019 with Sam Martin of the Detroit Lions. In July 2019, she opened up to PEOPLE about her new relationship with the NFL player. But later in 2020, the duo however parted away. And as of now, she seems to be single. Moreover, Nastia Liukin has also never been in any rumors and controversial matters. 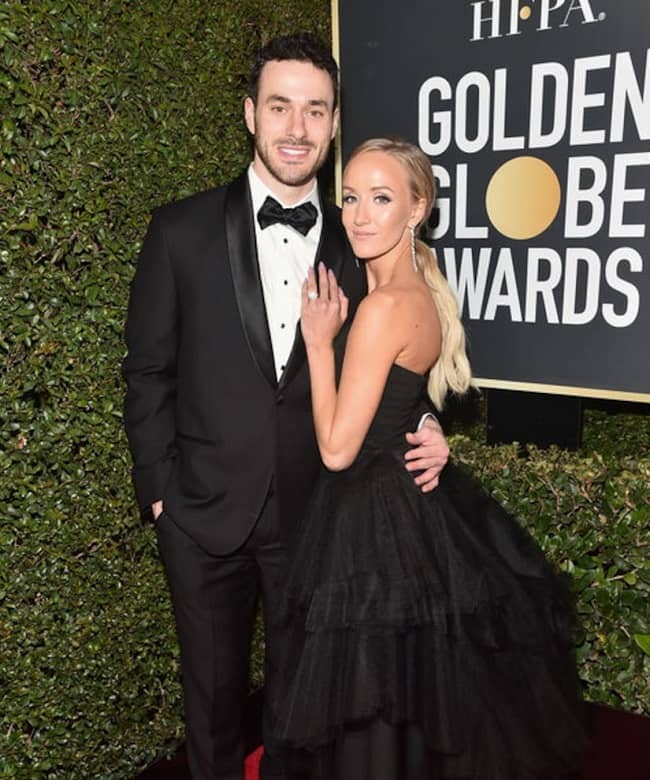 The American gymnast also has a fair complexion with a slim body type. As a gymnast, Nastia Liukin has been keeping herself very fit with her well-maintained daily routine. Moreover, Nastia has a pair of brown eyes and blonde long hair.